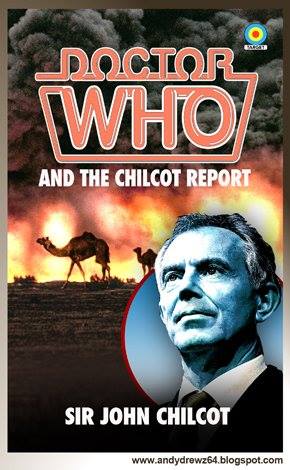 So, the Chilcot Report, end result of ‘The Iraq Inquiry’, is finally out.  I understand frantic, cosplaying fans were queuing up outside bookstores at midnight, desperate to get their hands on a copy.  People were getting seriously worried that Chilcot (or TRHSJCGCB, as fans call him, for ‘the Right Honourable Sir John Chilcot G.C.B.’) was getting too old, and would die before finishing it.

Personally, I won’t bother.  The TV series overtook it years ago.  The most recent seasons have been especially good, what with all the stuff about the rise of ISIS.  The finale to the series just gone, with the bombing in Baghdad, was very shocking, if not entirely unpredictable.  I was less impressed with the comedy storyline about the attempted Blairite coup within the Labour Party, happening right the away across the other side of the map you see in the opening titles.  It was disappointing that the TV series gave so much space to the keystone palace revolutionaries within Labour, and so much less airtime to the storyline about ISIS terrorism against Muslims, but I guess they know their audience.

I don’t need to actually read the Chilcot Report to know what the main plot developments are, not least because reviewers have helpfully spoiled it at me since the publication.

The report is actually quite strong, which (I admit) surprised me.  While I was not expecting (as it seems some were) the report to openly call Blair a war criminal and demand he be strung up from a lamppost in the Strand, I was expecting the report to be another in the line of whitewashes and semi-whitewashes which constitute the long history of UK establishment ‘reports’ and ‘investigations’ into that mess of things we now refer to by the handy catch-all word ‘Iraq’.  Stripped of the cautious language, the report (rather surprisingly) amounts to a more-or-less complete vindication of most of the major points made by those opposed to the war before it happened.

Now, I’m not gonna say I told you so… but I fucking did.  I was saying most of this stuff back in 2003.  And that wasn’t because I was especially clever or clued-up.  I wasn’t and I’m still not.  Pretty much everything you needed to know was in the public record before the war.  You could tell, from the public record, that it was highly unlikely (next to impossible) that Saddam still possessed functioning WMD, or the capability to develop them – confirmed by Hans Blix.  You could tell that the intelligence dossiers released by the Blair administration, and all the bluster of Colin Powell, and all the obfuscation of Bush and Fox News, was so much hot air – just a little sceptical study told you so.  It was obvious that nobody had a plan, or had had enough time to work one out.  You didn’t need to be a seer or a foreign policy expert or a historian.  Entire popular political books, loaded with facts devastating to the case for war, were published before in the invasion.  Here’s Media Lens, writing in February 2003, about how Iraq had been disarmed and the media were trying to bury that fact.  You certainly didn’t need to be a frothing Lefty like me to see that we were being sold snake oil.  This was evidenced by the fact that the majority of the population of Britain opposed the war, represented by the 1.5 to 2 million who demonstrated in the streets of London.  Much as I wish they were, they can’t all have been Marxists… though the much-hated (in many ways justifiably so) Socialist Workers Party were instrumental in organising the demonstration.  I marched alongside people of many political persuasions, and I was proud to do it.    Even if you weren’t against the war before it happened (and I know intelligent and morally serious people who supported it because they believed it necessary to remove the tyrant Saddam) the subsequent years have surely made a difference.  Surely it has become clear, to any intelligent and morally serious person, that, just on the basis of a crude numbers game with human lives, it was the wrong thing to do.

So what is the significance of the Chilcot Report, if it just tells us – essentially – what we all already knew?  You might be tempted to say that it represents the end result of a sceptical process of investigation and confirmation.  After all, it isn’t enough to simply sense the truth – that way lies the trap known as ‘truthiness’.  You must confirm it, with facts and evidence.  And sure, there’s something to that.  But, as I say, a helluva lot of the facts and evidence were already there, for all to see (as long as they dug just a tad deeper than the front pages of most newspapers), before the invasion.  Chilcot doesn’t seem to tell us anything much new about how disarmed Iraq was, how insignificant a threat Saddam was, how unconnected to al Q’aida and 9/11 he was, how rushed the attack was, how entirely disregarded were the doubts of diplomats, the ‘international community’, and unprecedentedly huge numbers of an outraged global public.  Chilcot doesn’t seem to tell us anything new about how shambolic and ill-prepared the invaders were to conduct their colonial administration of their conquered territories.

Chilcot will perhaps leave us a little better informed about the exact processes whereby a government deceives itself in order to justify doing something it was already committed itself to doing.  But again, we already know how ‘doublethink’ words.  Orwell told us.

The trouble with Chilcot is that it is, as Joe Glenton (an Iraq veteran) says in the International Business Times, “just an establishment take on events”.  It is another brick in the wall of the ideological consensus that ‘Iraq’ was a massive ‘mistake’.  To quote Glenton again: “Tripping and falling is an accident, getting drunk and trolling your boss at the Christmas party is a mistake. Iraq was neither. It was calculated and intentional.  Going to war with Iraq required careful planning and deep forethought. I would call that premeditated murder.”

It profits us nothing to look at the shambles that the Blair and Bush administrations made of their intel and planning, and call them simply evidence of a ‘mistake’.  If I choose to open fire on a school in the hope of killing mice, and find later that I’ve mown down an entire Geography class, I can’t then reasonably say “oops, sorry, my bad… but at least I didn’t intend to kill the kids, I was just trying to get the mice.  Gee, I guess I should’ve planned it better.  I know people were telling me it was bound to go wrong, and that there weren’t even any mice in there anyway… but I was so sure, dammit, I was so sure.”

No doubt, the invasion of Iraq was a ‘mistake’, but what kind of mistake, and measured by who’s yardstick?

Iraq isn’t a country to us anymore.  It’s now, as I say, a handy catch-all term for a series of events, a historical moment, a chain of mistakes or scandals or even crimes, a war (itself a euphemism for ‘invasion’), a tragedy, a whole genre of political writing and news reporting, etc etc etc.  When people say that ‘Iraq’ was ‘a mistake’, it’s almost like they’re saying that the entire existence of the country was a mistake… which would actually be a comprehensible position for the British establishment to take, given that Iraq was essentially created as a singular political unit by the British Empire.

The (most recent) UK invasion of Iraq was a mistake in the same way that any murder is a mistake.  It is a mistake to commit violent crime.  It was also a mistake in the sense that Bush and Blair clearly didn’t intend for blowback like the rise of ISIS, any more than they intended for blowback like the Arab Spring.  It was a mistake in the sense that it was a badly planned and thought out crime, which had consequences unintended by the criminals.  It was a mistake in that it achieved only some of its objectives.  The main underlying historical process at work, manifested personally in Bush and his cronies, and their adherence to a fanatical form of neo-imperialism, was the drive of a declining imperial power to reassert dominance.  Oil, and the associated takeover and flogging-off of Iraq’s infrastructure and economy, shows you that proximal economics of it all… imperialism is the distal historical cause.  Many of these objectives were achieved, as I say… but with unintended consequences such as could’ve been (and were) forseen by any student of the history of declining and over-extending empires.  The UK’s involvement in this US adventurism steems from a deeper-still history of global imperialism, a history which feeds directly into Atlanticism and the ‘special relationship’.

The invasion of Iraq was manifestly not a mistake in the sense of a typo, or accidentally running someone over on your way to help out at a soup kitchen – which is the version that most of the Blairites in Labour would want to sell you.  There can be little doubt that jitters over exactly what the Chilcot Report would say fed directly into the timing of the Blairite Labour-Right’s recent farcical attempt to dethrone Jeremy Corbyn.

Chilcot specifically evades the issue of the ‘legality’ or otherwise of the ‘war’.  Thing is, I don’t care if it was legal.  Unlike Tony Benn and Chomsky and the Lib Dems, I never did.  Apartheid was legal in South Africa.  The Holocaust was legal.  Empires and tyrannies find the legality to frame whatever they do.  China Mieville, in his work of theory Between Equal Rights: A Marxist Theory of International Law, has adapted the ideas of the Bolshevik legal theorist Pashukanis and various postmodern writers, to create (amongst other things) a devastating critique of appeals against the ‘illegality’ of imperialist acts.  For Mieville, international law is a never-ending oscillation between consequentialist and universalist arguments (Mieville adapts the categories of ‘Apology’ and ‘Utopia’ developed by Koskenniemi), with imperial force always lurking in the background as a way of enforcing whichever kind of politico-legal-ethical argument is currently being employed.

There is so much I don’t care about actually.  I don’t really care if Blair personally lied, or if he sincerely believed he was doing the right thing, or if he managed to convince himself that Iraq possessed WMD that Saddam was 45 minutes away from launching straight at Buck Palace.  I don’t really care if the invasion made Britain more or less safe.  None of these questions change the fact that the Iraq invasion was immoral, that it was brutal imperialism.

I don’t want Chilcot to be the capstone and headstone and flagstone it so evidently is meant to be, that the establishment and media so evidently want it to be.  I don’t want it to be the season finale, either leading to more of the same, or being seen as a satisfying conclusion.  I don’t want the wounds to be allowed to heal.  I don’t want Blair to be made a judas goat, taking upon himself the sins of the entire rotten, filthy system.  I don’t want idiosyncracies and follies and mistakes to be seen as ‘the story’, no matter how much of a part they made naturally have played.  I don’t want Chilcot to be seen as the system righting itself (even if at great length), like when people say “see, the system works!” when a wrongfully-convicted man is released after 15 years in prison.

Not that anyone involved in the (admittedly shambolic) planning of this crime will ever spend a day in prison.