The Memes of Production

Okay, so this popped up on my Twitter feed: 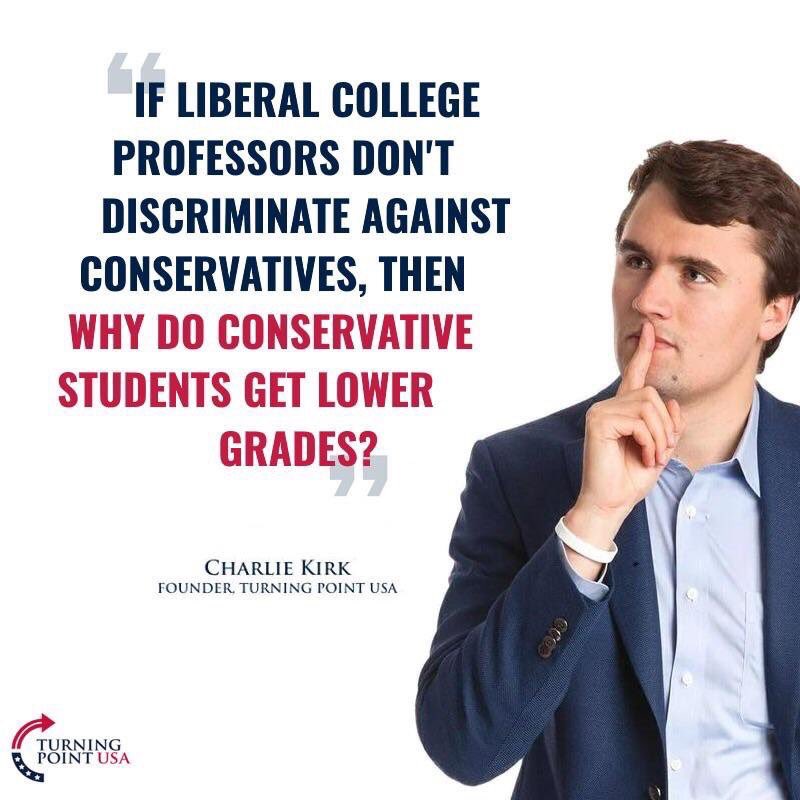 Now, it’s tempting, isn’t it?  A really desirable little chunk of cheese, just sitting there, saying “eat me!”, conveniently arranged on a nice wooden platform, framed by a kind of metal wire sculpture of some kind…

I mean, there are so many possible responses.  The person who I saw sharing this on Twitter responded with the admirably direct “because they’re stupid as shit”.  I myself contemplated several possibilities.  There was “So near and yet so far” and “Because they don’t know about Ockham’s Razor”, and a more serious one, which was “Of course they discriminate!  You have to when giving out grades!”  And so on.  It was gonna be great.  I was going to flip the right-wing narrative, revealing them to be – yet again – projecting their own sense of entitlement onto the people they hate.  I was going to point to their own desire for special treatment, their own snowflakehood, their own yearning for victimhood as a great big excuse, their own spoiled sense of grievance, which leads them to assume that they’re right because they feel they must be, and anyone who doesn’t let them win is evil.  Etc, etc, etc.  This is their narrative about liberals and socialists and feminists, and young people generally, and, of course, it is a far better description of themselves than it is of their targets.  And they remain blissfully unaware of how utterly they confuse their own babyish malcontentment with the legitimate complaints of others.  So this was a great opportunity to make this point again on Twitter.

But, yeah, to cut a long story short: it’s fake.  Because of course it is.  As they say: if something seems too good to be true, it usually is.

The only thing that gave me pause was… well, this is Charlie Kirk, we’re talking about here.  A man so profoundly stupid its a wonder he remembers how to get his trousers on in the morning.  A man so deceiving of both himself and others that it isn’t too implausible to imagine him sticking his own head that far up his own ass and then waddling proudly into the town square and waiting for applause.  If anyone was going to self-own this spectacularly, it’d be… well, it’d be Ian Miles Cheong. Or Paul Joseph Watson. Or quite a few other people.  It’s a fairly long list, actually.  But Charlie Kirk’s definitely on it.  As I said recently, libertarians don’t understand their own dogma – they think the doctrine of ‘self-ownership’ requires them to constantly self-own in public.

But, as it happens, Charlie Kirk doesn’t seem to have said this.  I searched for the quote and found only the meme.  And the meme is not to be found on Turning Point USA’s website, or in the festering cesspool of bile and bigotry and aggrieved whining and deluded ignorance that is their Facebook page.  And I trawled through a lot of their memes looking for it.  Couldn’t find it.  I suppose it could be there and I just missed it, but I doubt it.  I’m not looking for another forty minutes.  Seriously, the memes never stop over at that shithole.

As it happens, my joke above notwithstanding, I don’t actually know (or care) if Kirk identifies as a libertarian, but Turning Point USA certainly proffers memes featuring great libertarians.  Our old friend Murray Rothbard, for instance. 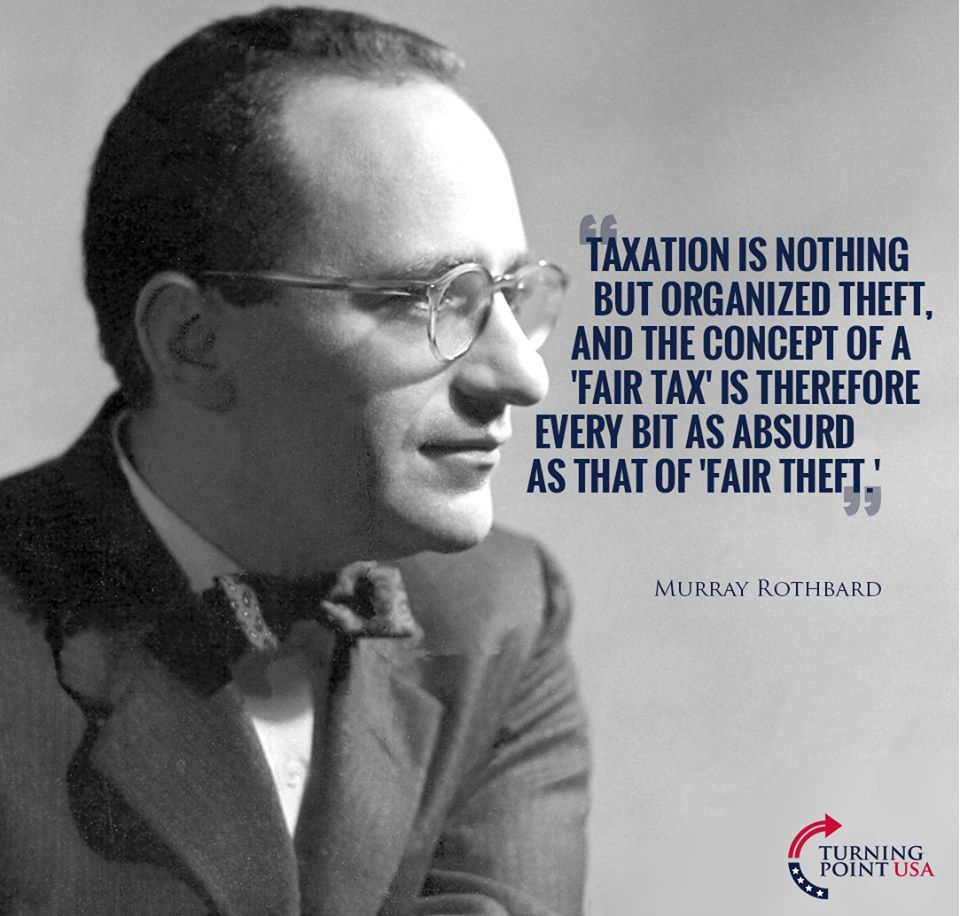 Did Rothbard actually say this?  I’m not sure.  While the sentiment is certainly rothbardian, I don’t recall encountering this quote in any of the reading I did.  Of course, it’s possible I just missed it.  Or don’t remember.  The quote can be found online, but generally only in articles by libertarians where they quote Rothbard thus without citing their source.  I’m inclined to think it’s probably genuine.  It’s quoted repeatedly at very pro-Rothbard sites, libertarian sites, Mises.org, etc, and certainly doesn’t traduce the man to whom it is attributed.  Even so, it’d be nice to have a source. 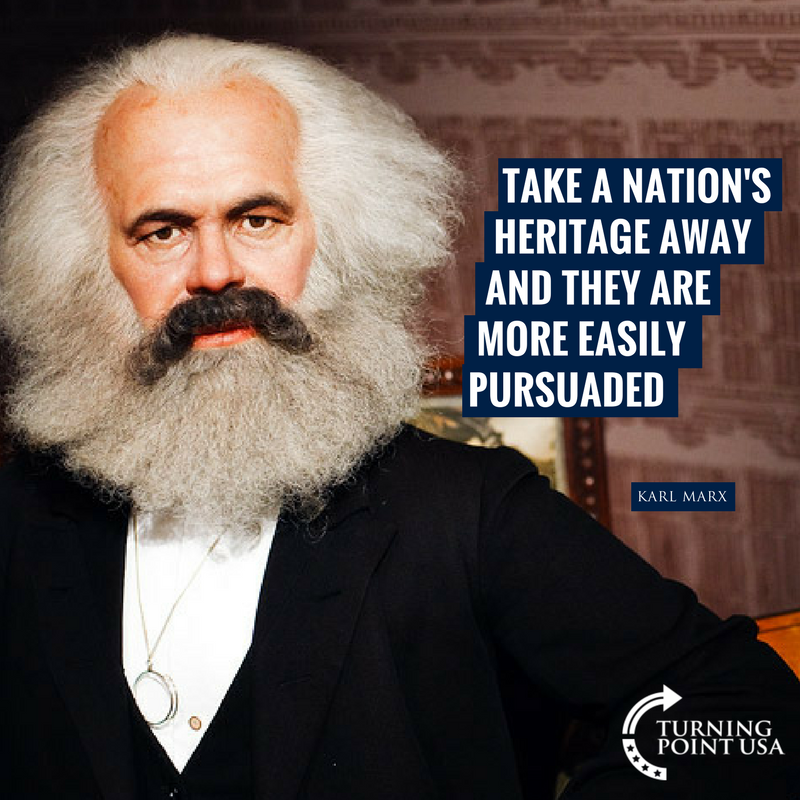 Now, if you’re anything like me the first thing you’ll notice is that the word ‘persuaded’ has been misspelt.  (Why do these people hate their heritage so much that they will so abuse the English language???)

Secondly, you’ll notice that this appears to be a photograph of a waxwork dummy, which is… puzzling.  Did they just not notice? Do they think this is an actual high-res colour photo of Marx?  When do they think he lived?  (Is this the kind of research which only left-biased professors mark down out of ideological spite?)  If they do know it’s not really him, why choose this image?  It’s not as if real images of Marx are hard to find!

But its actually rather appropriate, given that this too is a bogus quote.  Marx never said or wrote this.  At least, I’m fairly sure he didn’t.  I can’t pretend to have read every word the man ever wrote, but I’ve read most of them, and this isn’t amongst them as far as I know. Also, it doesn’t sound like Marx.  I don’t just mean that it’s not the sort of political sentiment anyone familiar with his actual work would expect to hear from him (though it isn’t).  More prosaically… it’s badly written.  It’s clumsy and ungainly and contains a solecism.  Marx was a stylist.  He crammed ideas into sentences.  He chose his words very carefully, at least when writing for publication.  He would never have jumped so oafishly from the singular ‘nation’ to the plural ‘they’.  Okay, it could be an English translation of something he wrote in German, but it’s unlikely.  His translators were generally, y’know, literate.

Even so, I thought I’d better check.  It wasn’t impossible that this phrase was to be found somewhere in Marx.  Ripping something out of context can make it look bad.  And Marx is a particular target of this sort of thing.  (Edward Said is just the most influential of many people to tear Marx’s line “they cannot represent themselves; they must be represented” out of its original context in order to make him sound like an arch anti-democrat.)  But no, searching for the phrase in the meme (and for the key words in it) at the Marx-Engels Internet Archive yields no matches.

This is the closest I could find, from Marx and Engels’ early book The Holy Family:

A little obscure to be sure, rooted as it is in very old arguments, but clearly not anything to do with trying to soften America up for communism by making it illegal for them to say “Merry Christmas!”

The quote in the meme can be found online with a Google search… but, as far as I can see, only on right-wing websites and blogs where reactionaries regurgitate it at each other, again and again, and always without citing sources.

So what do we take away from this?

Well, there’s a salutary reminder – which most of us probably need from time to time – to check before you attribute conveniently open idiocy even to known idiots.  We have to do better than them.  These people simply don’t care about whether what they say is true as long as it panders to their prejudices, but are also so hypocritical that they will get upset if they get misquoted… all of which tells you something about the kinds of people we’re dealing with.

But more generally, and more importantly, there’s the fact that today’s reactionaries are – like gender – on a spectrum.  They are not sealed into little seperate and impermeable boxes, some of which are labelled ‘respectable’ and some of which are cordoned off behind police tape and caution signs.  The mainstream right and the far/alt-right are not in different universes, no matter how much they might snipe at each other.  They gain esteem in their respective camps via their performed (and genuine) animosity, but they are nevertheless siblings under the skin.  They listen to each other.  They read each other.  They inspire and embolden each other.  Arguments from Daily Mail columnists ended up in Breivik’s manifesto.  And only today, British right-wing mainstream broadcaster Julia Hartley-Brewer was defending homophobe Richard Littlejohn on Twitter and, just a short way down thread, she started talking about “virtue signalling”.

How is this relevant to the above?  Well, as I say, Turning Point USA can supply you with lots of memes, where they approvingly quote a wide range of people, including reactionaries ranging from Thatcher to Ayn Rand to father-of-paleolibertarianism (itself a progenitor of the alt-right) Murray Rothbard.  Trawl the memes like I just did and you’ll find every species of alt-right and far-right ‘argument’ indirectly represented, from YouTube-style anti-SJW gubbins through to stuff that could’ve come from the more ‘respectable’ front-men like Richard Spencer.  They don’t actually quote Spencer or people like him, but the dogwhistles come at you thick and fast.

For instance, when Wax Marx above says “take a nation’s heritage away and they are more easily pursuaded” [sic], what’s that but a dogwhistle for the Cultural Marxism conspiracy theory, which is itself a repackaged version of Nazi ideology?  Turning Point USA are – at the very least – hosting an image which lies about Marx to tacitly push an anti-semitic conspiracy theory which, in the today’s extreme reactionary movement, is inked to notions of ‘white genocide’, etc.

In the comments next to the Marx image, at least one person points out that the quote is probably fake.  It doesn’t matter. The quote is still up.  And devoted Turning Point fans defend it as genuine.  One of them even responds, with relishable irony which demonstrates I wasn’t wrong to think the Charlie Kirk meme could’ve been genuine…

Just above this there’s this comment, which demonstrates the actual effect of lies like this all too clearly (and this is nasty, by the way):

If Charlie Kirk does place a pensive finger to his lips and wonder why conservative students get lower grades (do they even?  I don’t know and don’t care!) then perhaps he might like to consider the possibility that it might because they’re getting their heads filled with lies and misapprehensions by him, and by people he dogwhistles for.

Your grade, Charlie?  I’m gonna have to give you an F.

For Fascism.  And for Fuck Off.

Jack Graham wrote about Doctor Who and Marxism, often at the same time. These days he co-hosts the I Don't Speak German podcast with Daniel Harper.Support Jack on Patreon.
New Kickstarter Flash Goal, Podcast Appearance The Proverbs of Hell 37/39: And the Beast from the Sea