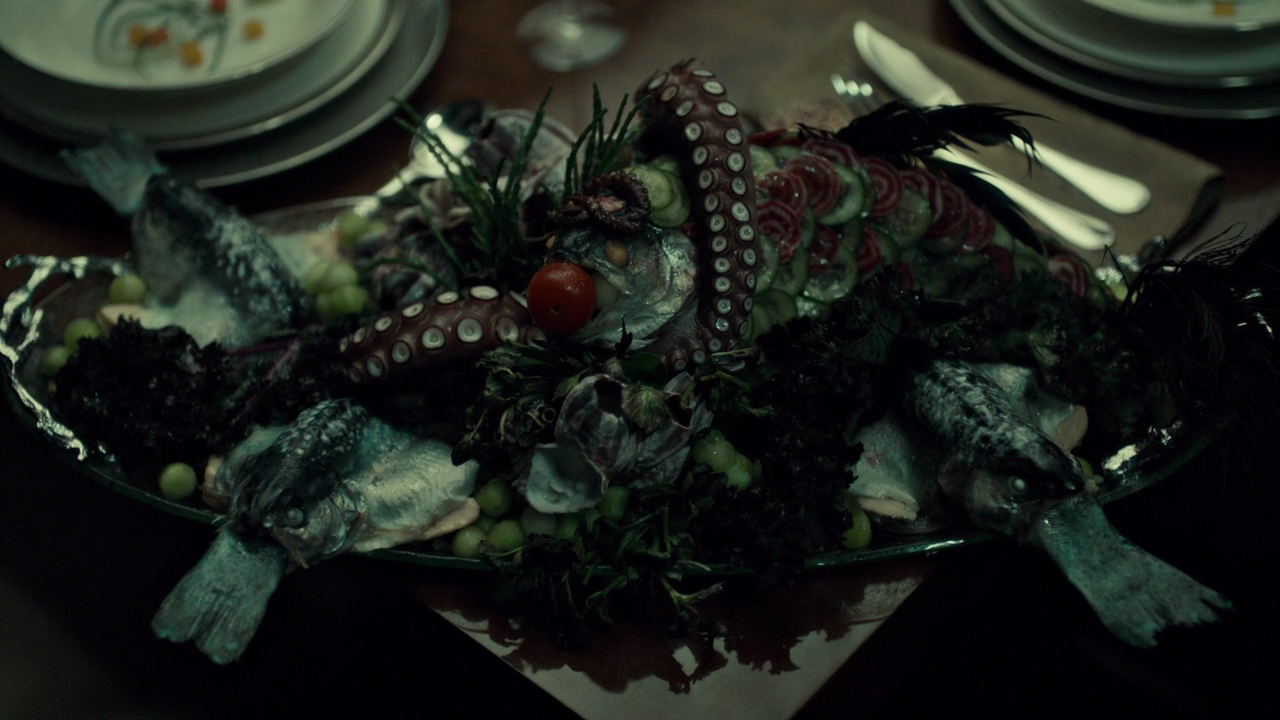 SU-ZUKANA: A palate cleanser, typically involving vinegar. A better title for last week, I suspect, but still fitting for this, which essentially starts off with all new concerns.

JACK CRAWFORD: How do you catch a fish who isn’t hungry?

WILL GRAHAM: You have to change tactics. Use live bait that moves and excites them to action. Gotta make him bite even though he’s not hungry.

WILL GRAHAM: You have to create a reality where only you and the fish exist, where your lure becomes what he wants most, despite everything he knows.

JACK CRAWFORD: Wrong move and he swims away.

Will’s framework of fishing and hunting has had time to evolve in his solitude, so that fishing takes on aesthetic qualities. Of particular interest is the creation of realities, an explicitly narrativizing approach that reframes fishing as an act of artistic creation. Already the reality he needs is coming into being.

HANNIBAL: Truite saumonée au bleau with vegetables and broth, served with hollandaise sauce on the side. Beautiful fish, Will.

WILL GRAHAM: It was my turn to provide the meat.

HANNIBAL: More flavorful and firm than farmed specimens. I find the trout to be a very Nietzschean fish. Trials of his wild existence find their way into the flavor of the flesh.

Will’s laconic line about providing the meat – sufficiently passive aggressive that Hannibal calls him on it shortly thereafter – still flags a fundamental appetite to do so. The bait, in other words, has been flashed. Hannibal, meanwhile, is going to entertaining lengths to empathize with the fish sufficiently to find aesthetic sustenance in it, elevating the trout into a would be uberfisch so that his dominance of it can feel substantive.

HANNIBAL: I agree with the pagans. The horse is divine. All beasts of burden are sacred animals.

A striking claim from Hannibal. The easy (and thus hopelessly lazy) interpretation would be to treat this as some sort of lie, but Hannibal has no motivation to do so in this instance, and he is not given to unnecessary falsehood. (Anyway, his declaration that he agrees with the pagans is too blatantly true in the general case to sustain that reading.) What, then, does he mean by sacred in the context of beasts of burden, which would by most readings be a lesser creature than the pigs he uses as his aesthetic baseline? The most likely reading is that he respects beasts of burden for their acceptance of subservience, finding a spiritual power in the fact that they do not think themselves more than they are.

HANNIBAL: The horse is a chrysalis, a cocoon meant to hold the young woman until her death can be transformed.

JACK CRAWFORD: Transformed into what?

HANNIBAL: Life. A new life. This is a birth. Or it was intended to be. This is every bit as much about giving life as it is taking it.

An interesting question: does Hannibal actually not understand the scene before him, or is he taking an excuse to shove Will into the line of fire? I am inclined to believe the former, first by reapplying the principle that Hannibal does not lie unnecessarily, and second by the fact that it becomes unsatisfying if Hannibal is as good at being Will Graham as Will is. This is a case with a counterintuitive twist – the conflict that Hannibal sees exists because the scene has two authors working at cross purposes – and it’s appropriate that this is something Will can see but Hannibal cannot. 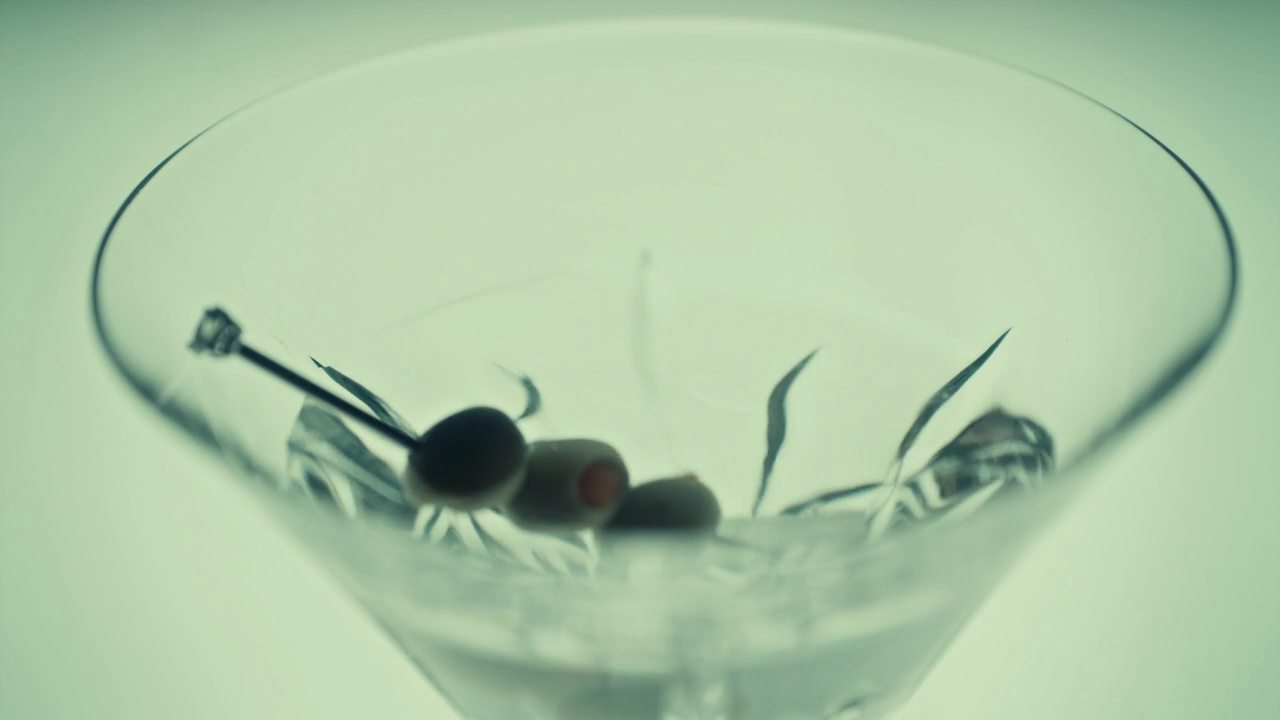 The introduction, as an off-camera presence, of Mason Verger, the main antagonist of Harris’s Hannibal, where he has an extensive history with Hannibal that predates his arrest. Here he literally drinks a martini made with his sister’s tears, which is a pretty solid introduction to him in all his grotesqueness. This is also, notably, the first annotation for this episode not to involve animals, a sudden rush that establishes a theme for the latter half of the season. Underlying the transition is the fact that Mason Verger raises hogs.

HANNIBAL: Are you going to try again?

MARGOT VERGER: This is where therapy gets tricky.

HANNIBAL: It doesn’t have to be tricky.

HANNIBAL: I am ethically obligated to take action to prevent that murder. Be that as it may, if there’s no one else to protect you, Margot, you have to protect yourself. It would actually have been more therapeutic if you had killed him.

Margot forms an interesting contrast with Franklin, the only other regular patient of Hannibal’s we ever see. Hannibal seems to hold Franklin in contempt leavened by a mild interest in his possibilities, to an extent that makes it somewhat puzzling why he even takes on patients. Margot, on the other hand, has obvious appeal to him: a patient he can straightforwardly nudge towards murder. Indeed, his final analysis here is straightforwardly true and very likely the most useful therapy it is possible to give Margot. 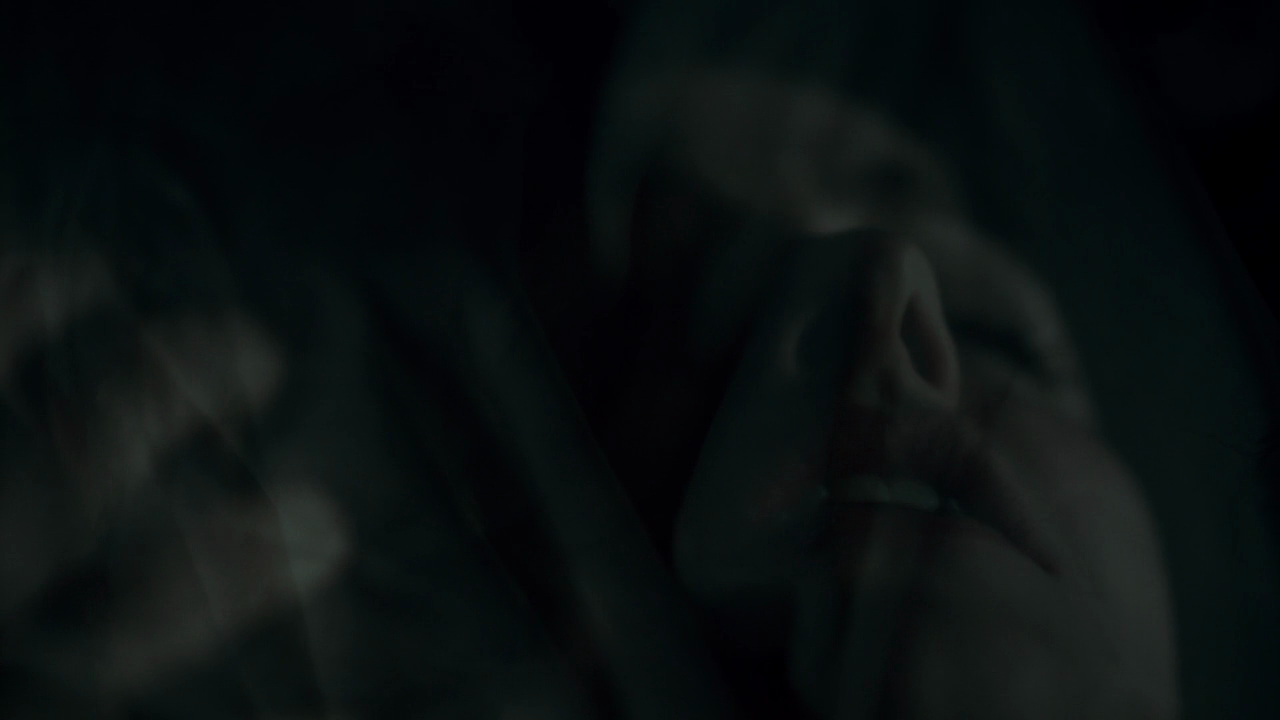 The debut of Hannibal’s distinctive visual approach to sex. This is, of course, rooted in its overall aesthetic of transitional carnal closeups and heavy abstraction, and indeed in this opening effort consists of little more than the show’s usual preferences of composition, framing, and editing applied to naked bodies. Future attempts will get more interesting. Those interested in this aesthetic of sex should also check out Sense8 and the pornographic work of Four Chambers. 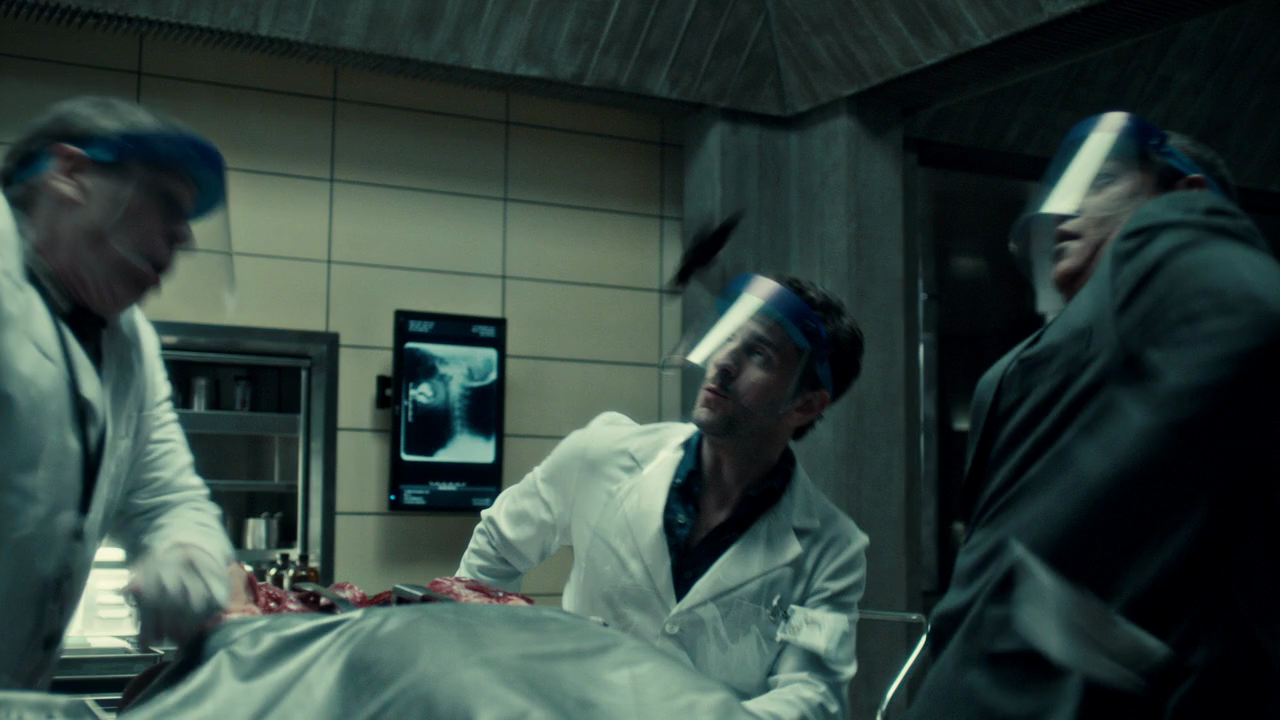 As if “woman inside a horse” was not a sufficient visual, we get the kicker that there’s a bird stuffed inside the woman. The obvious reference to go to is the turducken, and Janice Poon obliges, but as the turducken is specifically trademarked to Paul Prudhomme while the underlying technique of engastration goes back to the middle ages, let’s avoid that. And give Poon credit, as she designed the truite saumonée au bleau, with the fish seemingly consuming their own tails, in homage to the engastration of the murder. (Other satisfying bits of Poon’s blogging for this episode include her explanation of how to get gill-gutting a fish to work on camera.)

HANNIBAL: You were able to reconstruct his fantasies. One dead creature giving birth to another. The bird, his victim’s new beating heart. Her soul given wings.

WILL GRAHAM: Rebirths can only ever be symbolic.

WILL GRAHAM: Wasn’t that the goal of my therapy?

Conversations in Hannibal are often based on a structure of people talking past each other, but this goes further than is usual. Does Hannibal disagree that rebirths can only be symbolic? Does he recognize Sarah Craber’s rebirth into the bird in a way Will does not? Does Will recognize that he has experienced a rebirth that is far more than mere symbol? These questions are simply elided in their entirety.

HANNIBAL: After everything that’s happened, Will, you still believe–

WILL GRAHAM: You can stop right there. You may have to pretend, but I don’t.

HANNIBAL: No, you don’t. Not with me.

WILL GRAHAM: I don’t expect you to admit anything. You can’t. But I prefer sins of omission to outright lies, Dr. Lecter. Don’t lie to me.

This newly assertive line for Will in his therapy marks a significant turning point for the character – a moment where his experiences translate concretely to action in a way they had not necessarily since his release last episode. Although for all the determination involved, “can you lie more interestingly” is a petty easy ask of Hannibal.

HANNIBAL: Do you fantasize about killing me?

HANNIBAL: Tell me. How would you do it?

WILL GRAHAM: With my hands.

HANNIBAL: Then we haven’t moved past apologies and forgiveness.

WILL GRAHAM: We’ve moved past a lot of things. I discovered a truth about myself when I tried to have you killed.

HANNIBAL: I need to know if you’re going to try to kill me again, Will.

WILL GRAHAM: I don’t want to kill you anymore, Dr. Lecter, not now that I finally find you interesting.

Another rapid flurry of lines worth honing in on. Hannibal’s extrapolation from Will’s desired murder method is a delightful efficiency of profiling – the sort of criticism characteristic of artists, with an efficiency and scope born of intimate familiarity with the tools and craft of the matter. Hannibal’s line about doing bad things to bad people, meanwhile, is a restatement of an earlier exchange with Margot, drawing links between her and Will well in advance of their actual intersection. Will, finally, is calling back to “Apéritif,” where Hannibal confidently predicts Will’s eventual interest in him. Will’s invocation of this is at once sincere and sardonic. On the one hand, he really is fascinated by Hannibal at this point. On the other, he recognizes that he’s already on Hannibal’s hook even as he attempts to ensnare him onto his.

MARGOT VERGER: My family doesn’t see me as the victim. They see me as the passive-aggressor. They were disgusted by what my brother did. Not with him. With me for allowing it to happen.

HANNIBAL: Your brother dehumanized you and your family unfortunately fosters that climate of disrespect.

HANNIBAL: I’m much weirder than you will ever be, Margot. It’s fine to be weird.

Also, Hannibal speaks with satisfying awareness of the complex phenomenology of abuse.

HANNIBAL: How does that make you feel?

HANNIBAL: Anger is an energizing emotion; prompts action against threat. If you’re angry, you’re optimistic you can stop this from happening again.

MARGOT VERGER: I know how to stop it.

HANNIBAL: Anybody can become angry. According to Aristotle, that’s the easy part. But to be angry with the right person, and to the right degree, and at the right time, and for the right purpose, and in the right way. That’s not easy. If you really want to kill your brother, Margot. Wait until you can get away with it. Or find someone to do it for you.

Hannibal offers tremendously pragmatic and helpful advice, continuing the theme of his nuanced understanding of abuse. On the other hand, from this point on his lack of murdering Mason becomes conspicuous. He clearly wants to, but refrains out of, essentially, respect for Margot and the therapeutic need for her to do it.

WILL GRAHAM: Peter… is your social worker inside that horse?

This is the best line of the season, probably of Hannibal in its entirety, and very possibly in the history of television.

HANNIBAL: With all my knowledge and intrusion, I could never entirely predict you. I can feed the caterpillar, whisper through the chrysalis, but what hatches follows its own nature and is beyond me.

The line is from Hannibal, originally applied to Clarice. (“Knowledge and intrusion” is the giveaway formulation, though I confess I can’t articulate why.) This is, however, a considerably more lucid and on-point understanding of what Hannibal has done to Will than Will’s seed-based metaphor in “Yakimono.”