BEDELIA DU MAURIER: It’s hard to predict when brittle materials will break. Hannibal gave you three years to build a family and a life, confident he’d find a way to take them from you.

WILL GRAHAM: And he has.

The blunt fatalism of this admission surprises, and doesn’t really seem to follow from any of Will and Molly’s interactions last episode. Nor is it entirely clear what’s going on here. Will asserts that he sees himself killing Molly over and over, which is consistent with his general psychological state, but feels very Season One, and kind of lazily disconnected from the show’s current concerns.

WILL GRAHAM: Bluebeard’s wife. Secrets you’re not to know, yet sworn to keep.

BEDELIA DU MAURIER: If I’m to be Bluebeard’s wife, I would’ve preferred to be the last.

WILL GRAHAM: Is Hannibal in love with me?

BEDELIA DU MAURIER: Could he daily feel a stab of hunger for you and find nourishment in the very sight of you? Yes. But do you ache for him?

Bluebeard gives his wife a key to every room in the house while forbidding her from the basement, where it turns out all his previous wives are. The story goes more or less how you’d expect from there. Bedelia’s “would’ve preferred,” however, prompts Will to consider his relationship with Hannibal in a new light, leading to the meat of the exchange. Bedelia’s definition of love is revealing of her own pathologies, reducing love to its pathological components as opposed to treating it as an affirmative feeling. This is partially because of the understandable need to frame love in terms of appetite, but also because of Bedelia’s own callous detachment. Still, it’s slashy as fuck, so that’s something.

HANNIBAL: Will’s thoughts are no more bound by fear or kindness than Milton’s were by physics. He is both free and damned to imagine anything.

The odd turn of phrase is unsurprisingly from Harris—a description of Hannibal in Silence of the Lambs. But it’s an odd line. There’s no particular connection between Milton and physics, and the idiosyncrasy of the invocation provides another faint echo of Blake.

JACK CRAWFORD: What’s got your attention? God, the Devil and the Great Red Dragon?

HANNIBAL: Lest we forget the Lamb.

JACK CRAWFORD: Will is the Lamb of God?

HANNIBAL: Hide us from the wrath of the Lamb.

An anticipatory title drop for the final episode. We’ll mostly talk about it next week, but it’s interesting that Hannibal is hyping the danger of Will to Jack at this point.

HANNIBAL: Then that makes you God, Jack.

JACK CRAWFORD: Yes it does.

Jack’s line was added after the shooting script, and improves the exchange immensely by giving Jack a sort of equal status to Hannibal in the overall “being a bit fucked up” stakes, which is fundamentally more interesting than Hannibal just pushing Jack around. The assertion that all gods demand sacrifices is not quite true, though it’s a common enough trope to not deserve excessive nitpicking.

WILL GRAHAM: I’m in it now. Can’t go home as long as he’s loose. I really badmouth the Red Dragon in TattleCrime and then give him a shot at me.

JACK CRAWFORD: It would have to be a pretty good shot. What about the setup?

WILL GRAHAM: Something open. Someplace where he can get close. I don’t think he’d snipe. He might fool me, but I can’t see him with a rifle.

WILL GRAHAM: Someone to hide the wire of the snare. Are you volunteering?

And then there’s an immediate cut to Chilton, because lol. That said, Alana’s throwing Chilton under the bus here is somewhat scantly motivated. Or, at least, her justification for doing so is undercooked—there’s no clear reason why Dolarhyde would think it less of a trap, or, at this point, fail to be suitably enraged at Will, who is already a target of his. Still, she got her way.

HANNIBAL: It’s a particularly good one.

DR. CHILTON: It, uh… it may be my favorite. I’ve seen a lot of hostility. But this was quantifiably bitchy. Do you think I’m your nemesis?

HANNIBAL: No. Nemesis? No.

HANNIBAL: It didn’t hold up to scrutiny.

DR. CHILTON: Of course it didn’t, I was lying. On your behalf. To save your life. You refuted your insanity defense. I went out on a limb for you and you went up there and sawed it off.

There’s a subtle delight in Chilton’s simultaneous claim that he was lying and demonstration that he understands Hannibal so little as to think that Hannibal’s sense of self-preservation might override his sheer contempt for Chilton. (See also the vast arrogance of aspiring towards being a “nemesis.”)

DR. CHILTON: This is the ending fate has chosen for you. Your teeth will go and your strength. Nobody will be afraid of you anymore. After Dr. Bloom’s reign, you’ll be out in the ward. The young ones will push you around and use you for sex. All you’ll get to read is what you write on the wall. You’ve seen the old ones. They cry when they don’t like the stewed apricots.

A rare direct reference to rape, and somewhat crassly what is in effect a prison rape joke. The monologue is taken directly from Silence of the Lambs, and is a somewhat odd construction for this version of Chilton, for whom its sadism is curiously unleavened by preening neediness.

FREDDIE LOUNDS: You’re making statements no investigator would ever make and no straight newspaper would credit.

WILL GRAHAM: You’re not a straight newspaper. You sell T-shirts that say, “The Tooth Fairy Is a One-Night Stand.”

FREDDIE LOUNDS: I can get you one, if you like. You small or medium? Small, I bet. They’re not selling so well since you started calling him “The Dragon.”

The t-shirt is mentioned in Red Dragon, though not directly related to Freddie Lounds. To my surprise and mild dismay, this shirt does not appear to exist in the real world. The running gag of Freddie ogling Will (c.f. her discussion of the size of black box she needed for his genitals) is satisfying, especially given the extent to which she openly ships him and Hannibal.

WILL GRAHAM: Not only is the Tooth Fairy insane, he is ugly and impotent.

DR. CHILTON: There’s a strong bonding of aggressive and sexual drives that occurs in sadists at an early age.

WILL GRAHAM: He’s a vicious, perverted, sexual failure. An animal.

Chilton’s open astonishment at Will’s broadsides against the Red Dragon give this scene an extra tinge of pathos from his sheer haplessness. As for Will’s attacks, they are largely toned down from the book, where he suggests Dolarhyde is impotent and gay. Although the show makes Dolarhyde’s homophobia clear, with Chilton concluding that it’s part of why he dislikes the “Tooth Fairy” moniker, this is left purely as Dolarhyde’s prejudice, as opposed to something Will and company are inclined to directly use against him. The result focuses more attention on Dolarhyde’s sexual resentment, reinforcing the idea of him as a metaphor for toxic masculinity.

FRANCIS DOLARHYDE: Will you tell the truth now? About me. My work. My Becoming. My Art, Dr. Chilton. Is this Art?

FRANCIS DOLARHYDE: You said I, who see more than you, am insane. I, who pushed the world so much further than you, am insane. I have dared more than you. I am the Dragon and you call me insane? Before me, you are a slug in the sun. You are privy to a great Becoming and you recognize nothing. You are an ant in the afterbirth. It is in your nature to do one thing correctly: Before me you tremble. Fear is not what you owe me, Dr. Chilton. You owe me awe.

Dolarhyde’s sense of himself as a visionary creates a parallel with Blake, while his declaration that his murders are Art sets up a comparison with Hannibal. In both cases, Dolarhyde comes up lacking; his suggestion that he has pushed the world is absurd, while his claims to art lack any imagination or real substance beyond his own pathologies. His final claim to be owed awe is fundamentally pathetic—the point where this particular monster becomes worthy of nothing more than contempt.

JACK CRAWFORD: Where’s the other one?

HANNIBAL: This one can provide you anything the other one can. I’m sorry, Jack. The tragedy of what’s happened to Frederick has put me in an excellent humor.

The funniest thing about this scene is Mads Mikkelsen’s shit-eating grin. The second funniest thing is that Hannibal only eats one lip, considerately leaving the other so Jack can have it analyzed.

ALANA BLOOM: We wanted to enrage him.

HANNIBAL Congratulations. You could’ve provided anything Dr. Chilton could. That would’ve been your lip I was tasting. Again.

ALANA BLOOM: You publicly discredited Dr. Chilton. By refuting him, you orchestrated his end by proxy.

HANNIBAL: You orchestrated his end, Alana. You saw the hole and let him roll right into it. That’s professional discourtesy.

It’s not really clear why Alana is as upset by this accusation as she is, given that she is depicted as consciously throwing Freddie under the bus here. That ruthlessness is admittedly extreme for her (though not inconsistent with her new and hardened edge), but it’s very clearly depicted as a conscious process on her part, which makes going for the cheap drama of Hannibal revealing her own monstrosity to her pretty lame.

BEDELIA DU MAURIER: You put a hand on Dr. Chilton’s shoulder for the picture. Touch gives the world an emotional context. The touch of others makes us who we are. It builds trust.

WILL GRAHAM: I put my hand on his shoulder for authenticity.

BEDELIA DU MAURIER: To establish he really told you those insults about the Dragon? Or had you wanted to put Dr. Chilton at risk? Just a little?

WILL GRAHAM: I wonder.

BEDELIA DU MAURIER: Do you really have to wonder?

BEDELIA DU MAURIER: Did you know what the Great Red Dragon would do? You were curious what would happen, that’s apparent. Is this what you expected?

BEDELIA DU MAURIER: Then you may as well have struck the match. That’s participation. Hannibal Lecter does indeed have agency in the world. He has you.

Note the irony of Bedelia leveling this accusation in terms she learned from Hannibal. It exacerbates the irritation of Alana’s handling that this intentionality is much less clearly communicated with Will, however. It’s wholly believable that he anticipated Dolarhyde’s actions, but again, Alana’s doing so is explicitly demonstrated to the audience. 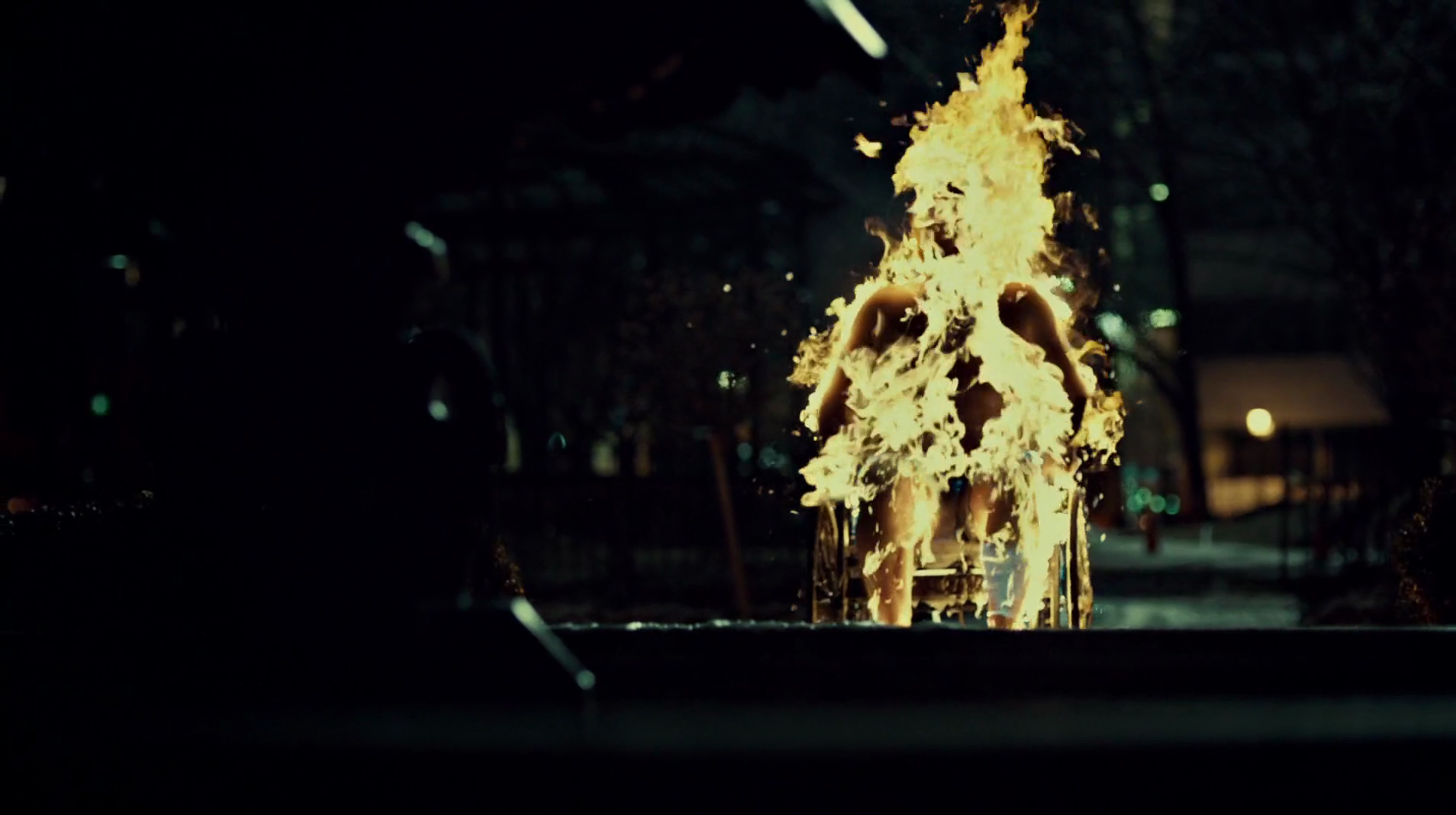 The script lampshades its recycling of this image, having already used it for Fake Freddie Lounds last season. It is Freddie who gets set on fire in the novel, but Fuller reasonably decided that, having gender-swapped the character, this would be awful, and so it instead became Chilton’s maiming of the season.

Outside the Government: The Sign of Three The Proverbs of Hell 39/39: The Wrath of the Lamb