The Vorrh, by Brian Catling 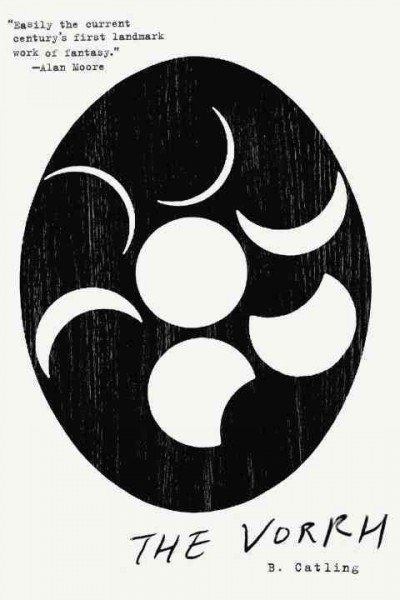 Reviewed by Phil Sandifer
Eligible for Best Novel and available for purchse here.
In many ways, I just want to link to Alan Moore’s introduction, since it is not as though I’m going to write a better review than it. And if one wants to be brief about it, “the sort of novel Alan Moore would call ‘the current century’s first landmark work of fantasy'” serves as a perfectly good description.
Which is to say that this is dense, literary fiction. It is tempting to call it magical realism as opposed to fantasy. But this would obscure more than it reveals. Its main plot (although it has many subplots) is the story of a man with a magic bow who is trying to cross the enchanted forest of the Vorrh. Its world is flecked with reality – another major character is Eadweard Muybridge, whose life plays out mostly as in our world – but is unmistakably a fantastic landscape, a world anchored by the hallucinatory forest and the monstrosities within.
What makes the book remarkable is in many ways the juxtapositions within it. The Vorrh is both medieval forest and colonial jungle, and the book draws from both iconographies, giving it a vibrant and intriguing heft. It is a book where things never quite become clear, and are all the more enticing and rewarding for it. It is labyrinthine and strange.
Catling is a sculptor by trade (The Vorrh is his debut novel), and the book has the heft and weight one would expect from this. It is intricate and carved prose that rewards attentiveness. This can make slow going at first, although the book becomes faster and easier once the vagaries of its structure and approach are known. It never becomes a page turner, but is instead one to savor; a structure of shifting viewpoints makes it easy to read one or two bits a night, allowng its strange tapestry to unfold. It has much to reveal.
The Goat Variations, by Jeff VanderMeer
Reviewed by Eric Rosenfield
Eligible for Best Short Story and available here.
Jeff VanderMeer’s story “The Goat Variations” fuses together some fairly hoary science fictional tropes: the government keeps psychics alive in dream states to predict the future (ala Minority Report), a time machine, a man who sees versions of himself across alternate realities. As with much fiction, originality is produced by the peculiar alchemy of how the tropes are mixed, melded and remixed, and this is a stellar example of how that is done.
Told chiefly in half-scenes and flashbacks, we find a strangely familiar president ruling over Anglo-America (the touch of his crown during coronation like an  “iron kiss from the mouth of God”), reading to children in a dilapidated school while his country is attacked. It is not Islamic fundamentalists attacking, however, but Christian ones in the rebellious heartland of the country. The president can’t focus, does not know what to do. Using tech gleaned from a bottled psychic—tech that shouldn’t, by any known science, work—his government has built a time machine that is not a time machine, a machine that seems alive and peers into the president’s mind, and in that moment, reading to the children, he sees other presidents of other alternate Americas, sitting, reading stories while their countries are attacked
“The Goat Variations” is a 9/11 story that barely refers to the event itself, instead using its echoes to show how that one event was many events, how history repeats itself and how our world is always already defined by power and corruption.
Aurora, by Kim Stanley Robinson
Reviewed by Axle
Eligible for Best Novel and available for purchase here.
Aurora is the name of a Planet orbiting the star Tau Ceti over 11 light years away. Aurora was chosen hundreds of years ago, as the proposed site of a future Earth colony. Aurora is the destination of a generation-ship, whose thousands of inhabitants hope to make it their future home. Aurora is a story about these people, whose lives have forever been in bondage to their ancestors dream of exploration, and about the limits of human accomplishment.
Robinson’s novel is less concerned about action and mystery solving, although there is both, and more concerned about exploring a way of life, the people that live that life, and the world those lives are lived in. In this way it is very similar to his previous novel Shaman, but Aurora is a more interesting and enjoyable effort. The three primary characters are: a mother and daughter who live close to the time of arrival, of the Ship (I don’t believe it’s ever given another name), at it’s destination, and the Ship’s AI which is becoming more and more it’s own being as the story progresses. The world of the Ship is detailed and evocative, and while the actual plausibility of Ship is questionable, it is firmly in the hard SF tradition.
The Ffrst two acts of the novel dealing with the ships arrival and the colonization of the Tau Ceti  system are very good. The descriptions of the difficulties of running a space ship, and colonizing a planet, with only a small population base to draw on, are convincing and intriguing. The third act, unfortunately, does fall apart a bit. While I am very sympathetic to the argument Robinson is attempting, the demands of wanting the story to have a traditional structure requires him to introduce a very important technology late in the novel, which is both an obvious fudge, and undercuts the case he’s trying to make.
I’m being vague to avoid spoilers in the previous paragraph.
That aside, Aurora is a great read, and an interesting attempt at envisioning what an interstellar space journey would really entail for a people.  Highly recommend it to anyone who is a fan of the hard SF genre.

The Magician’s Apprentice Review I Wanted To Save The World: Mr. Robot

Leave a Reply to CespinarveCancel reply