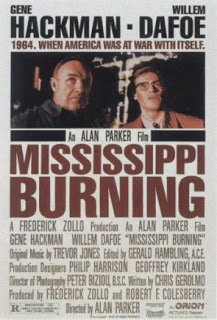 Wrong With Authority, the podcast where four white guys talk about movies based on real historical events, returns… and this time we’re talking about Mississippi Burning (1988), a travesty of the story of three civil rights workers – Schwerner, Chaney and Goodman – who were murdered in Mississippi in 1964 by the Klan/cops/state government (all essentially the same thing at that point).

Beware triggers.  We’re talking about vicious racism, hate-motivated violence and murder.  At one point in the episode, one of us reads out part of a historical document which contains the n-word.  We believe the context justifies its inclusion, but please be aware that it’s there.  Jack made the decision to not bleep it out, and takes responsibility.  Also, we mention rape a couple of times – because it was an integral part of both Jim Crow and slavery.

The film focuses not on the Civil Rights workers, or the struggle, or the African Americans oppressed by Jim Crow (American Apartheid), but rather on the subsequent FBI investigation.  It portrays the FBI as a heroic organisation bursting with concerned liberals, but also as solving the case via maverick vigilante violence.  Systemic racism is effaced.  In other words, according to Mississippi Burning, black people are invisible, or are passive and cowardly; Civil Rights workers are foolhardy victims; and the problem is neatly solved by a benevolent establishment going righteously outside the law to punish the bad guys – bad apples who are bad because they’re just inbred hicks.

With this episode, we’re all acutely and especially aware of the structural flaws inherent in our show… i.e. we’re all white guys.  This episode is, nonetheless, an attempt to grapple with the fact that WWA has, up til now, been heavily white-centric.  But we’re inevitably going to underperform here.  We in no way wish to talk over PoC who are talking about issues like this.  We’ll be happy to hear input and criticism.

Some Links To Things Menioned in the Episode:

The Invention of the White Race by Theodore W. Allen.

We Are Not Afraid by Seth Cagin and Philip Dray.

I Am Not Your Negro – new documentary about James Baldwin.

The 13th – documentary based on The New Jim Crow.

Shabcast 20, in which Jack and James talked religion, etc.

Some Links to Other Interesting and Connected Things:

Here’s information about the real case upon which the film is loosely based.

Here’s Neshoba, a documentary about the case.

While searching for the bodies of Schwerner, Chaney, and Goodman, the FBI found the bodies of two other black Mississippians murdered by the Klan, Charles Eddie Moore and Henry Hezekiah Dee.

Here’s a history and overview of the Klan, from the Southern Policy Law Centre.

Hooded Americanism: The History of the Ku Klux Klan by David M. Chalmers.

At The Hands of Persons Unknown: The Lynching of Black America by Philip Dray

Here’s some info about COINTELPRO, the FBI’s covert criminal conspiracy to infiltrate, attack and destroy the American Left, and particularly African American leaders and the Civil Rights movement.

The Black Panthers and the FBI’s war against them.

Here’s Marx talking about the role of slavery in the rise of capitalism.

The music in this episode is ‘Strange Fruit’ sung by Billie Holiday, ‘Mississippi Goddamn’ sung by Nina Simone, and ‘A Change is Gonna Come’ sung by Sam Cooke.

“How long will we have to wait before Hollywood finds the courage and the integrity to tell the stories of some of the many thousands of black men, women and children who put their lives on the line for equality?” – Coretta Scott King, partner and widow of Dr. Martin Luther King Jnr.

“It was unfortunate that it was so narrow in scope that it did not show one black role model that today’s youth who look at the movie could remember.” – Myrlie Evers-Williams, partner and widow of Medgar Evers.

“a film that used the deaths of the boys as a means of solving the murders and the FBI being heroes.” – Carolyn Goodman, mother of Andrew Goodman.

“… the image that younger people got (from the film) about the times, about Mississippi itself and about the people who participated in the movement being passive, was pretty negative and it didn’t reflect the truth.” – Ben Chaney Jnr., brother of James Chaney.

“[a] terribly dishonest and very racist [film that] distorts the realities of 1964” – Stephen Schwerner, brother of Michael Schwerner.

Jack Graham wrote about Doctor Who and Marxism, often at the same time. These days he co-hosts the I Don't Speak German podcast with Daniel Harper.Support Jack on Patreon.
Commentary: Aquarium Park, Freedom of Movement, Shinto and Superplays Here’s a Podcast Round-Up