You Should Have Been a Mother (Earthbound) 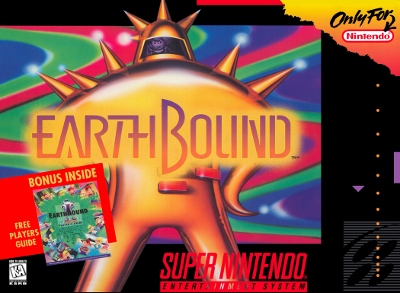 As any die-hard EarthBound fan will tell you, in Japan EarthBound is called Mother 2, and is the middle of the three-part Mother trilogy. As a child, I just knew that I didn’t like EarthBound very much. The game is full of unpredictable tonal shifts, genre pastiche, self-awareness, and quirky humor, and these were either things I didn’t fully grasp or just didn’t enjoy. Somehow, the game just left me feeling vaguely alienated. Possibly, I just wasn’t ready for it.

Part of this may have been the gameplay, too. The basics are familiar to any JRPG fan: wander around, get into fights, select actions from menus, pray quietly to yourself. But the game is difficult, even by the standards of the day. It falls prey to a lot of common design flaws in JRPGs that raise the difficulty without adding fun. For instance, many enemies summon ‘backup’ occasionally, but with no bounds on how frequently this happens in a single fight, fights can become increasingly resource-draining without bound. Critical hits from enemies are far too common, and respawn rates are high enough to make getting anywhere a slog.

Aesthetically, the game is very distinct. It has cartoony graphics; the character design is frequently compared to Charles Schulz. The battle sequences featured bizarre, abstract backgrounds, a style referred to by the designers as an attempt at creating a “visual drug” experience. The spell effects were likewise highly abstracted, patterns of lines and diamonds that feel almost like sigils. The music direction is some of the best of the era; the soundtrack has an amazing range of styles and moods.

Despite all of this, I didn’t remember much about the game before returning to it. There is one part of the game, though, that left a very strong impression on me, and which more than lives up to my memory: the final battle.

The source of evil and ultimate villain in EarthBound, Giygas, remains an unseen but often-named actor throughout the game. The final battle with Giygas is one of the most deeply unsettling experiences I’ve ever had playing a video game. It takes the game’s underlying “weirdness” and cranks it up until it lands squarely in “uncomfortable.” Even in the battle with him, Giygas remains unseen. Instead, you seem to be fighting reality: Giygas is the wavy, “visual drug” battle screen background itself, and the combat music, both of which are now more sinister than anywhere else in the game. As the fight goes on, and you damage Giygas, the music gets increasingly frantic, the background increasingly angry.

After a short intro sequence, though, the only way to hurt Giygas is via one of the character’s (Paula, the lone girl in the cast, incidentally) “Pray” ability. Throughout the rest of the game, this ability has random (and usually very minor) effects. But now, each invocation of prayer leads to a cutaway scene of the characters you’ve met along the way, each feeling called to pray for you, until the whole planet is praying at once, lending their psychic power to help you.

In the end, though, it’s still not enough. Eventually you are told that Paula’s prayer “is absorbed by the darkness.” The key, of course, is to keep hoping, keep praying. You pray again, and someone hears your prayers. And they are truly powerful. They pray and pray for you, and the strength of their hope and faith is enough to destroy Giygas and win the day. Ultimately, the game reveals their name – it is you, the player, sitting in your living room trying as hard as you can to defeat the final boss of EarthBound. (the intent of this scene is much clearer in the Japanese release, which has you enter *your* name separately from the *protagonist’s* name, and uses your name here)

In other words, these four fictional heroes only win the day and purge evil from their world because you, the player, want it that way. And you, in turn, only want it because it is the goal, it is how you complete the game. Or perhaps you’ve developed some empathy for these four children, and you want them to succeed on those grounds. Regardless, though, the point is clear: you are the arbiter of this reality, its controller and its intended audience. Everything here exists because you willed it: you inserted the cartridge, you pressed power. You with your technology summoned this world into being and plowed a mythic narrative through its landscape.

Giygas only exists because of us, because we demand conflict in our narratives. We demand that our heroes suffer. The reason Giygas is unseen is that he is the entire game, the narrative structure itself. In the context of a video game, then, he is the game mechanics, the battle music and the background and the text boxes themselves. Every time Giygas attacks, the game displays the message “You cannot comprehend the true form of Giygas’ attack.” Because Giygas is the narrative, and the characters within the narrative can’t perceive their fictional nature.

Collectively, the writers and developers and artists and ultimately the players are all Giygas’ Mother. And not just Giygas, but all the narrative pain and conflict that Giygas represents. We are the cultural Mother of a thousand demons, attempts to exorcise our own pain and fears, cast out into the void. If we simply allow it to happen differently, Ness and his friends get to live quiet, normal lives. Nobody kills Laura Palmer, she’s just a happy teenager loved by everyone in her weird little town. Saruman never comes to the Shire. But that would be boring, it would make for dull stories. Our creations must suffer for our amusement.

Is this ethical? Is it good or just? These are nonsensical questions, right? We’re dealing with fictional entities. They aren’t real, not in a tangible, material way. They don’t have interiority. No sentient beings were harmed in the making of this story. Stories are just mirrors we hold up to the world, just shadows cast on the wall. But once these stories exist, once we have looked into these mirrors, they are alive in our minds forever. Our stories are the substrate on which we build our material reality.

That’s the central question that EarthBound asks: why these stories, full of pain and loss? Why violence, why tragedy porn? We can choose which stories to tell, and we choose these stories, told this way. Itoi Shigesato stumbles into a violent scene from The Military Policeman and the Dismembered Beauty as a young child, and that forms part of the ground on which he walks the rest of his life. It leads to a nagging question, never quite fully formed, in the back of his mind. Giygas is the suffering we inflict upon Ideaspace, and the idea that this suffering is necessary.

So Itoi creates Mother, a magical ritual to birth something new. Aside from the game’s title, this game-as-magical-birth is also hinted at in the final battle, where the distinct image of a fetus can be seen in the bizarre background imagery. (ironically, this has been widely assumed to be a reference to abortion, not birth) The final battle, then, is not just the battle to purge Giygas from the narrative, but also a difficult birth. The pulsing ring of Giygas’ attacks become contractions, Paula’s repeated prayers are rhythmic, forceful breaths.

Did he succeed? In Japan, at least, it seems like he did. The last twenty years have seen the slow but steady growth of a genre called iyashikei, heartwarming stories designed to calm and heal, trading suspense and adrenaline for anticipation and dopamine. Stories where friendship is the most important thing. Stories to defeat Giygas.

Are You Sitting Comfortably? – First Movement Of Spaghetti, Myths, and Donuts