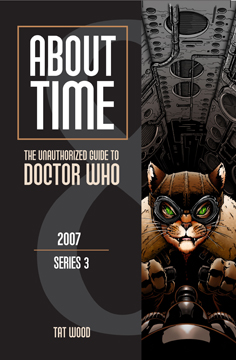 At long last, there’s a new volume of About Time. For those who are unaware, About Time is the gold standard of comprehensive studies of Doctor Who – a towering project whose Alan Moore it has been my pleasure and privilege to serve as Grant Morrison to. This latest volume covers from The Runaway Bride through Voyage of the Damned, with stops off for “Time Crash” and The Infinite Quest. The short form is that it’s another great entry in a great series that’s absolutely worth buying if you’re the sort of person who buys massive and sprawling reference boks on Doctor Who. You can get it on Amazon right here, or on Amazon UK here. I recommend it highly.

Now for the meaty bits. I want to start with the kind of obvious red flag the book throws up, which is the fact that the entire book is covering just one year of Doctor Who.  For one thing, this incremental progress is frustrating given that the book’s been a long time coming – Volume 7 was four years ago. For another, at 350 pages this means that About Time is spending more time on the Martha Jones era than it did on Hartnell, Troughton, Davison, or indeed Tom Baker, though I think we can all agree that Volume 4 was overly scant. These concerns are not entirely off base, but on the whole the situation is better than it might appear. Given the announcement in the back of the book that Volume 9, rounding out the Davies era, will be out in 2018, it looks like the manuscript just got unruly in size and was split.

The larger issue is simply that unruliness. While it’s apparent that their working relationship was untenable, there’s no real way around the fact that About Time was better when Tat Wood still had Lawrence Miles as a coauthor. The tension between the two seems to have tempered everyone’s worst instincts, resulting in extraordinarily good books. Solo, on the other hand (or rather, with new cowriter Dorothy Ail, promoted from her “additional material” credit on Volume 7), Wood’s approach tends to bloat. The Continuity and Things That Don’t Make Sense sections are particularly out of control by this point, with the latter even seeming to know it, helpfully marking off its more excessive sections with section breaks and italics warning readers of, for instance, the one-page discussion of the bus timetables in The Runaway Bride or the page and a half on the dodgy geography of Daleks in Manhattan/Evolution of the Daleks. Equally, when you have to set multiple sections of your book off with disclaimers that practically beg the reader to skip them, it’s maybe time to cut those sections. Certainly it leaves one with the distinct fear that Kill the Moon is going to require its own volume in order to get through that section.

But out of this over-comprehensiveness comes many of the book’s best features. The first side-essay, for instance – “Why Weren’t We Bovvered” – is an eight and a half page overview of the intersections between Doctor Who and comedy that opens by talking about writers David Whitaker tried and failed to hire. Its ridiculous, of course, and doesn’t need anything like that scope to make the relatively narrow point it’s actually arguing for, but that criticism is almost wholly beside the point. There’s a pleasure in the comprehensiveness – in seeing the argument laid out in its entirety.

The bigger pleasure with a book like About Time, however, is disagreeing with it. (And I very much include my own books in that. A persistent mystery to me is why people feel the need to disclaim that they don’t agree with me on everything. Of course not! What would be the point?) Volume 7 was in this regard notable for its relative hostility to the new series – a position hinted at in the classic series volumes, but finally allowed to be unpacked in full. It was not an unadulterated screed about how Davies ruined Doctor Who – Wood’s far too smart for that. But it made a sensible and compelling case for what was lost in the translation of the show into the present day, even if its sense of what was gained was underdeveloped.

For the most part, Volume 8 is a firm improvement on this. The knife is stuck in at the moments you’d expect. The resolution of Last of the Time Lords comes in for the hardest kicking, but the Evolution of the Daleks through 42 stretch gets appropriate side-eye as well. But for the most part, the approach here is sympathetic to what the show is trying to do. Some of that is that Series Three gives good material for Wood’s aesthetic of Doctor Who (and Ail’s, which remains inscrutable – her favorite story in the volume is apparently The Infinite Quest) – Gridlock, Human Nature/The Family of Blood, Utopia, and indeed much of The Sound of Drums/Last of the Time Lords are as close as the Davies era comes to what he likes. But there’s also just a more even keel to the book – as though, with the hurdle of “now we’re on the new series” cleared, the book is able to relax and be itself again.

Which brings us to the two big points of disagreement – one friendly, one a point of genuine concern. The first is Blink. Wood’s distaste for Moffat was clear enough in Volume 7. This threatens to be a problem for future volumes (although again, he’s pretty good at evaluating things on their own terms even as he grumbles about what those terms are), but it makes the Critique section, in which he simultaneously trashes its legacy and the fact that it hasn’t actually aged very well. It’s a triumph of sacred cow killing that requires Lars Pearson to offer a mildly bewildered two page defense that amounts to “OK, but tons of people really like this for a wealth of really obvious reasons.” And frankly, as critiques of Moffat go, it’s actually on target, picking at the right sore spots. I envy whoever gets to write the defense sections in Volumes 10 and up, because it’s a delightful gauntlet.

The bigger point of disagreement is the essay attached to The Shakespeare Code, “Why Does Britain’s History Look So Different These Days?” It’s not even that it’s basic premise is off. Wood and Ail persuasively and cogently lay out the very different histories of race in the US and UK, and point out the ways in which the classic series was racially progressive (focusing particularly on Robots of Death). The point where it goes off the rails is subtler, coming somewhere between the absence of any grappling with the reality of Gareth Roberts’s politics, a point you probably need to deal with to talk about race and The Shakespeare Code at all sensibly, and the extended apologia for The Talons of Weng-Chiang. It’s not a bad apologia – Wood’s point that “if Bert Kwouk, David Yup, or whoever had played the part, people would still have problems with the use of the ‘Yellow Peril’ motif of Victorian penny-dreadfuls, but the debate would be on how far Robert Holmes was subverting those cliches” is basically correct. It’s just that, bluntly, this is shockingly the wrong essay and wrong take for a book being published in 2017 – an intervention in something that’s fundamentally not the debate about Doctor Who and race that needs to happen right now. To say nothing of the fact that the essay doesn’t even namecheck Bill, despite numerous other points in the volume that are updated through The Doctor Falls.

But the worst essay in it is merely misguided. Meanwhile, there’s a host of things both brilliantly insightful and hilarious. Not all of these are flashy – there’s a strong case to be made that the book’s best contribution to the literature is its ten page overview of the online extras from back in the day when the BBC had money to fritter away making Dalek games and extra commentary tracks. It’s nothing earth-shattering or revelatory – just good old-fashioned documentation of the margins. But the exegesis of where Martha went wrong is also phenomenal – a decisive and comprehensive intervention into a debate it was hard to imagine needed more words. And there’s also a bit pondering why the Tenth Doctor did not warn the Fifth about the Time War, in which it’s suggested that he was probably put off by the events of Warmonger, which may actually be the single greatest continuity patch in Doctor Who history.

All told, this is a book that takes the nearly impossible expectations generated by the history of the series and the amount of time that’s passed since the last volume and lives up them handily. This remains the gold standard for Doctor Who criticism, and we’re lucky to have it.

Hyrule Haeresis 8 The Punishment of Luxury: Revisiting Orchestral Manoeuvres in the Dark in 2017