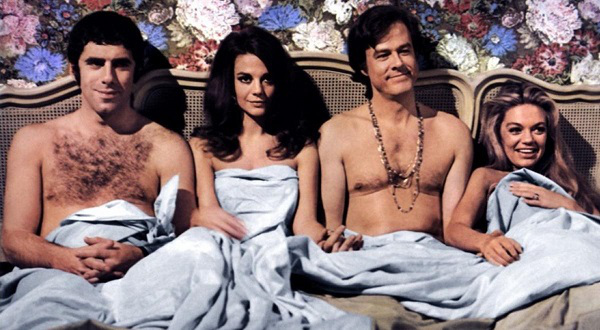 (Title given to this post with apologies to Jane and Lee, who to my knowledge are not in a relationship as would be implied by the inherent parallelism.)

This week over on Oi! Spaceman, Shana and I were joined by the wonderful Jane Campbell and chatted about The Time Monster in an episode called “Esoterica, Power, and Dick Jokes,” and in which all three of that triptych make an appearance. Jane has already shared that with the Eruditorum Press audience in the link above (and had a brief digression about hooting owls in the process), so I’m assuming most of you have already seen it, but if not you the link above will send you right there.

Title and header image are actually from this week’s They Must Be Destroyed on Sight, in which Lee and I kick off this year’s sex comedy series with a look at the 1969 counterculture/open relationship classic Bob & Carol & Ted & Alice. (Link goes to the podcast episode page.) Lee is monogamous (while, if you hadn’t heard already, I am polyamorous), so there was an interesting back and forth on the different character interactions and the overall meaning of the film as a whole. Some of the material I cover in this podcast is liable to make it into a future essay, so if you want an advance look at some of my thoughts on the way the sixties counterculture fed into the cultural malaise of the seventies, go give it a listen.