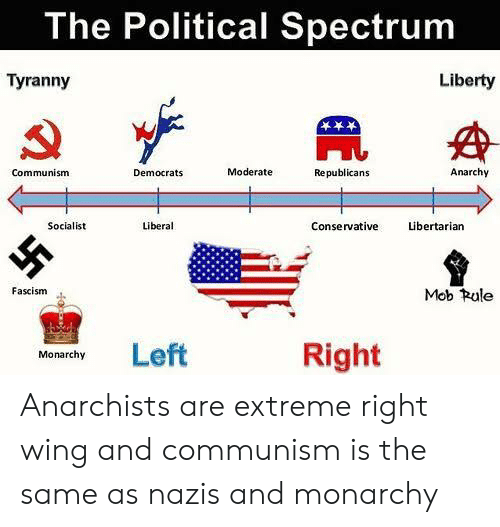 One of the quintessential aesthetic markers of our current cultural predicament is the online political spectrum.  Half pseudo-graph, half meme, it is a largely crude and homemade phenomenon.  It is both provocation and ‘cargo cult’ intellectualism.  It is especially beloved of the more gonzo elements within the online far-Right.  People create these things in their spare time.  As ludicrous as they usually are, they represent a tragically doomed attempt by confused and disoriented people (if also often sinister and dangerous ones) to understand a world which seems to them to be increasingly inexplicable, complicated, and menacing.  Indeed, they often reveal an attempt to understand a history which is somehow retroactively also becoming more inexplicable, complicated, and menacing.  They reveal the scared befuddlement of their makers even as they boastfully claim confident certainty.  One of the tragic things about these images is that they show people reaching for a way to express their fuzzy sense of political categories as complex, interrelated, liminal and evolving.  They are stunted and flailing attempts to engage in dialectics.

(Dialectical thinking is, on a very base level, an attempt to systematise, and make scientific, the common sense intuitions that most people bring to their world, if their vision is not clouded by the fug of bourgeois ideology.  For instance, it ought to be immediately obvious to everyone that wage labour is exploitative.  You boss gets more back from appropriating what you do for him than you get in wages.  If he didn’t, he wouldn’t hire you.  But our society erects vast frameworks of ideological obfuscation, geared towards obscuring such obvious truths, stretching from entrenched folk wisdom, through the hegemonic assumptions in news rooms, up to learned scholarly works of political philosophy.  People will often be pushed by their circumstances to instinctively reject the obfuscation and reach for new and better explanations.  Right-wing thinking in ordinary people is often a result of this kind of thing going wrong, of people trying to reject bourgeois ideology and falling deeper into a more savage version of it because they have no material and dialectical approach to replace it with.)

These homemade political spectrums tend to show a series of words or images or boxes representing political groups or philosophies or government forms.  There is a sense of motion and progression about the series.  The symbols have been placed in lines which suggest their sequential, evolutionary relation to each other.  One political group/philosophy/form is next to another, on one side or the other, because it grew out of it, or grew into it.  Somehow, by some process (largely occult, at least as far as these images can tell us), one becomes another as it moves down the line.  People who would sneer at the idea that gender exists on a spectrum, and often at the idea that species evolved, will reach for some kind of understanding of politics as involving the evolution of ideas, with the resulting ‘species’ of politics also being like colours on a spectrum, bleeding into each other.

Yet, for all that, they are deeply reductionist, even when they are not deeply ignorant and deluded.  (And this is rare.  Looking at them, you will generally encounter perversions of sanity, acquired from far-Right ideologues and recited, that beggar belief.)  Even as they are structured unconsciously and accidentally around a view of politics as being comprised of fuzzy and contingent and interrelated tendencies, arranged on an evolutionary line of progression… well, there it is.  They still see politics as comprised of discrete tendencies – too damn discrete.  Certainly, political tendencies may be delineated from each other.  But this is a method of thinking about them, a way of sorting them in one’s mind.  Reality is far more complex than that.  The essential problem with all scientific (or scientistic) reductionism is seen in just this syndrome: the breaking down of complex reality into handy conceptual boxes to make it easier to think about, followed by the mistaking of the boxes for aspects of reality itself rather than placeholder representations.  The beginning of an insight into the complexity of politics – represented by the line of progression and the closeness of different categories to each other – is undercut by the fact that the line is decorated with discrete boxes.  The tendencies and categories are still separate.  Their relation to each other might be acknowledged, but it is still a relation of proximity rather than interpenetration.  Indeed, the point of the exercise, having started as an attempt to understand complex relationships, becomes to keep the artificial boxes as impermeable as possible.

Moreover, these images are steadfastly idealistic, in the sense of conceiving politics as made of ideas which do things, or cause people to do things.  Material context and history is abstracted.  A word for a particular idea is also made to stand for a form of government, and an epoch of history.  All complexities and internal contradictions are collapsed into a word, and thus into the particular ideological understanding of that word being employed or implied.  And the nature of the government and history is assumed to stem from the nature of the idea, with the idea having no provenance in material history.  It is just there.  Even if its presence on a line almost acknowledges the temporal and evolutionary nature of politics, the line is divorced from material history.  Material history isn’t really on the graph.  It is just silently assumed to be something caused by the succession of different concepts/boxes.  And there is one line – usually.  This very abstraction of material reality and history, this placing of them subordinate to ideas, is itself a reactionary ideological assumption, aside from the details of the ideological constructions being put on this or that word.  The framework is as reductionist, and hence as reactionary, as that which it holds.

Where there is proliferation of lines, it tends to just look like the desperation of someone cheating by trying to express too much with their own inadequate design concept.  The arrangement of the political concepts/boxes is both the attempt to reach for a more complex view of politics and its simultaneous failure.  The line is a start, but it’s a false start.  It is an improvement on the idea of politics as undifferentiated and/or unplottable, but it is an immediate reduction of politics to a new kind of contextlessness: that of the linear, mechanical progression.  Even as people (generally somewhere on the left) try to understand the complexities of gender and find themselves having to move from spectrums to colour wheels to 3D colour wheels, people trying to understand the complexities of the politics from the right stick with straight lines.  But they have to, because the ultimate purpose of the homemade political spectrum image is self-comfort.

Ultimately, these maps of politics are extremely simple.  They are ways of arranging the values which the map-maker agrees with on one side and the values the map-maker disagrees with on the other.  Generally ignorant of the actual ideological and historical content of the ideas in question, we are actually talking not about agreement or disagreement but rather about emotional identifications and disavowals.  Gut reactions.  Deeply felt associations, aspirations, and identities, quite divorced from the actual material history of the ideological artefacts being associated with – which is why that history gets abstracted.  The deeply ahistorical, contentless, immaterial nature of the political understanding being diagrammed explains the symbological nature of the diagram.  The diagram is symbological because the politics is symbological.  The symbols in the diagram are symbolic of symbols.  It is a system of referentless symbols.

The purpose of creating the map/spectrum/graph is to create a moral diagram on which you are placed in the moral zone, which is actually the zone in which morality is symbolised (in the sense of being made into pure symbol) by signifiers one identifies with one’s self.  The purpose of the line is to separate the moral and immoral zones.  And the symbolic representation of these zones is derived from the aesthetics of identity.  The impetus comes from the way in which, and the extent to which, power has managed to associate itself aesthetically with certain signifiers which it has also managed to cause the map-maker to self-associate with.  This is why the project of creating such maps tends to be exclusive to the far-Right, with its basic project of mobilising those sectors of non-capital who nevertheless enjoy relative privilege – and thus a relative stake in the system – in support of capital.

The progress of the homemade political spectrum is the collapse of the desire to understand into the desire to be comforted.  The grasping after complexity resolves down into the rejection of complexity, its drowning in reification and reductionism.

Of course, before we start feeling too superior, we should remember that ‘horseshoe theory’ works essentially exactly the same way.  The makers of the homemade political spectrums may be engaged in ‘cargo cult’ intellectualism, but we should remember that ‘cargo cults’ imitated the actions of imperial intruders.  There is no hierarchy of civilisation to be found in the ‘cargo cult’.  There is precious little hierarchy of understanding to be found in the way the homemade political spectrum grasps after something of the method of mainstream political discourse.

Jack Graham wrote about Doctor Who and Marxism, often at the same time. These days he co-hosts the I Don't Speak German podcast with Daniel Harper.Support Jack on Patreon.
Someone Had to Lose (Fire on the Side) The Taste of My World (On the Boundary)