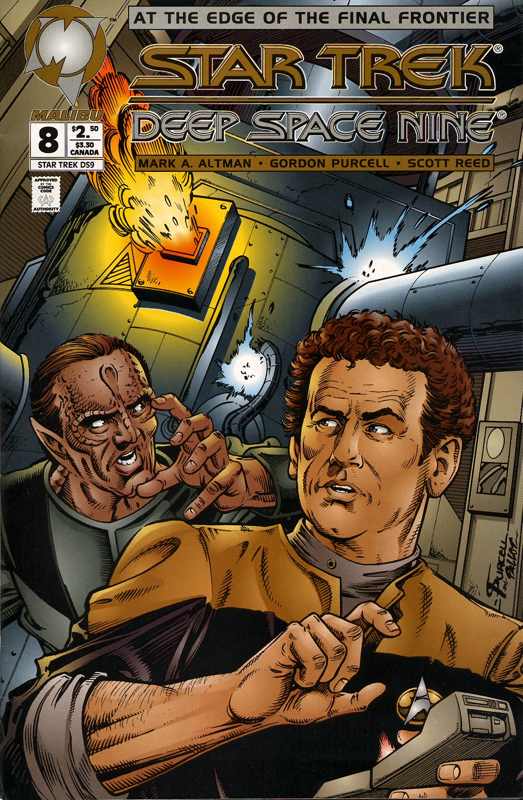 A young Bajoran girl is lying in bed late one night recording an entry for the journal that she’s keeping for a class assignment. Her mother comes in to check on her, but she’s interrupted by the arrival of two Cardassian soldiers. We cut to her stripped naked and hung from the ceiling as the Cardassians demand information from the woman they call “Trika”.

It’s two years later in a holosuite above Quark’s on Deep Space 9. Commander Sisko is playing baseball with Jake when the programme suddenly crashes and is briefly replaced by something from Quark’s pornography collection before the whole thing shuts down. In Ops, Kira informs Sisko that the station’s primary power reactor has just exploded, tearing a sizable hole in the lower decks and leaving the entire city hanging off of limited reserve power. When that goes, Deep Space 9 will be rendered dead in space, leaving everyone aboard to suffocate or starve. Chief O’Brien points the finger at the slipshod cross-wiring and patching employed by the Cardassian engineers to the point he can’t even tell where everything is, or if it can be repaired. Commander Sisko begins investigating how to get some of the station’s non-functional reactor cores on-line to buy O’Brien time to repair the main one, which is an undertaking that could take months. Major Kira suggests it’d be better to instate a full-scale evacuation of the entire city.

Sisko knows O’Brien can do the job, but he also knows he’ll need help. So he calls up Deep Space 9‘s former chief engineer, one Dulath, who served in that position during the occupation when the station was still known as Terok Nor. This is a move that arouses the skepticism of the entire senior staff, most notably Kira and O’Brien, but, confiding in Jadzia Dax, Sisko exposits he’s seen classified documents that reveal Dulath wasn’t terribly popular with his former bosses: Dulath was concerned the reactor cores were leaking sodium at a rate and volume so dangerous the entire station’s population was in danger. Gul Dukat and his administration had hoped to sweep that under the rug, but mounting public pressure eventually forced their hands and the faulty reactors were shut down. But not before Dulath was mysteriously and swiftly reassigned.

Down in the engineering core, Miles and Dulath are beginning to forge a working relationship, albeit a frosty one, outfitted in special radiation suits that come courtesy of Dax. The Chief isn’t too happy about the working conditions for the Bajoran “laborers” (slaves) that worked in these shafts when Dulath was here, though the Cardassian engineer points out that he and his staff always saw to it that they were cared for and treated well when they came to his division. Miles enters a crawlspace to investigate some antimatter pods and makes an astonishing discovery: Someone has carved out an entire living space deep within the reactor array, complete with a portable generator. And inside, there’s a diary. Back in Ops, Commander Sisko gives the journal to Major Kira to translate, and sends Chief O’Brien and Dulath back down into the bowels to come up with an update on the status of the main reactor. As Kira listens to a computer playback of the translated journal, she discovers what we all suspected: This is indeed the diary of the young Bajoran girl who was the daughter of the woman the Cardassian inquisitors called Trika. The woman who, Kira soon learns, was really known as Malor Bet, a high-ranking leader of the Bajoran resistance movement during the occupation.

In engineering, or what passes for it these days, Chief O’Brien and Dulath are discussing some technobabble that might get the reactors operational again. One might even say they’re starting to warm up to each other. Meanwhile Kira is growing more and more engrossed in the diary of Malor Bet’s daughter, and it’s having a visibly profound emotional effect on her. She soon learns from the diary that while the younger Malor was in hiding on Terok Nor, she received food and support from Quark (of course!), who told her to stay hidden because bad people were looking for her. Kira storms down to the bar and demands Quark reveal the girl’s identity, but the barkeep protests he doesn’t remember and that there were a lot of war orphans (and he would know). Dulath, who had been at the bar sharing a drink with the chief, breaks up the fight and tells Kira that the girl’s name was Malor Ti.

Dulath had been aware of her because her mother had been the leader of the resistance on the station and was executed. Dulath digs up all the biographical information on Malor Ti he can find searching through old occupation-era records and archives and comes up with a picture. And though he has to get back to engineering, he asks Kira to please let him know if he can be of any more help to her. Confiding to Odo that this young girl is very important to her for reasons even she doesn’t yet fully understand, Kira makes a dash for Quark’s holosuites, where she conjures up a holographic representation of Malor Ti herself.

“Requiem” marks the debut of writer Mark A. Altman, a creative figure who is going to be central to the final phase of this era. Simply put, Mark A. Altman is to Malibu’s Star Trek: Deep Space Nine book what Michael Jan Friedman is to DC’s Star Trek: The Next Generation one: He’s an immensely talented writer with an incredibly deft handle on both his craft and the source material. While Malibu’s output prior to bringing Altman aboard had been good, serviceable on average, starting from this story the line takes an immediate and dramatic uptick in quality. This is clearly a passion project for Altman, and it shows. Part of the reason why is that Altman is yet another Star Trek Obsessive-He’s of that generation that grew up on Original Series syndicated reruns and they more or less formed the template for his entire life. He, along with fellow Star Trek chronicler Robert Meyer Burnett (who did all the special feature for the Star Trek: The Next Generation Blu-ray season box sets) even made a semi-biographical comedy about being a nebbish and neurotic Star Trek fan trying to transition into being a functional adult called Free Enterprise, that featured William Shatner in one of the roles that helped shape his latter-day career and public persona.

So Altman is definitely of the same Nerd vintage and pedigree as Ronald D. Moore, which at first glance sounds like a really bad omen. He even got his start as a fan journalist writing about Star Trek for Cinefantasique Magazine. Thankfully, however, Altman does not tend to fall into the same traps Moore does on an aggravatingly regular basis, and “Requiem” is a rather stunning inaugural work from a Star Trek perspective. It is of course rather straightforward: It’s a Let’s Do of The Diary of Anne Frank for the Cardassian occupation of Bajor. And rather critically, it is The Diary of Anne Frank and *not* The Diary of a Young Girl, By Anne Frank, a distinction Altman seems very conscientious of making: Star Trek: Deep Space Nine needs the framing device of characters from the future removed from the initial event discovering and reading the diary in order to provide its regular cast with the required emotional impact and investment.

And boy is there an emotion to this story. It’s a simple, almost obvious brief. So obvious, in fact, that the TV show never did it. But despite what Malibu likes to say about the kinds of stories it does, most notably Altman’s next one, “Requiem” is something that the TV series not only could have done, it should have done-Doing The Diary of Anne Frank on Star Trek: Deep Space Nine as “Requiem” is as sensible as doing The Enemy Below on Star Trek as “Balance of Terror”, and it carries the same sort of impact. No, it does not supplant the original work and yes, subtly will be lost going from a real-world work of social realism to a genre fiction story about aliens with silly headpieces. But at the same time this also elucidates elements of the original story that may have been obfuscated by the inherent problems of historical fiction and drives the point home in a broader context, particularly to the sorts of people who might otherwise not expose themselves to a story like this. And really for that reason alone the project merits doing.

Altman’s grasp of the character’s voices is already near spot-on (I know I talk about this a lot in these essays, but it’s important), and in a few months he’s actually going to start surpassing the source material. Kira and Miles O’Brien are naturally the standouts, and they need to be: I love how Miles’ initial resentment of Dulath isn’t based merely on the fact that he’s a Cardassian, but his frankly well-grounded suspicion over what he *personally* might have overseen during the days working for Terok Nor. There’s the occasional grump about “Cardie technology”, but it comes across more as professional ribbing of the sort that used to foster jokes about old Soviet engineering. It’s a very nuanced handle on bigotry, and Star Trek absolutely requires that: The TV show cratered itself far too often by curtly and dirtily lifting 20th century race relations wholesale without actually trying to reconceptualize them through the lens of Star Trek’s ostensibly utopian setting. In short, Altman doesn’t just get Star Trek and its characters, he gets the *spirit* of Star Trek, which is way more important.

Miles is lively and likable all throughout, but it soon becomes apparent that Kira is going to be the real star here. The scenes in which she’s listening to Malor Ti’s diary are heart-wrenching, and a lot of credit is also due to the artwork, particularly Gordon Purcell’s penciling. These characters feel alive and human, and Kira’s growing obsession with the Malor Ti case that pays off next month is an iconic moment for the series that is a stellar early example of this line’s grasp of naturalism and atmosphere. Deep Space 9 itself feels grander and more lived in than it ever did on TV too: The engineering section and reactor arrays are towering, multi-story affairs that dwarf Miles and Dulath as much as they seem riddled with mouse holes and other nooks and crannies that can be explored and crawled through.

A perfect place for a little girl like Malor Ti to lie hiding and waiting.

L.I. Underhill is a media critic and historian specializing in pop culture, with a focus on science fiction (especially Star Trek) and video games. Their projects include a critical history of Star Trek told through the narrative of a war in time, a “heretical” history of The Legend of Zelda series and a literary postmodern reading of Jim Davis' Garfield.
Jerusalem Review Comics Reviews (September 14th, 2016)