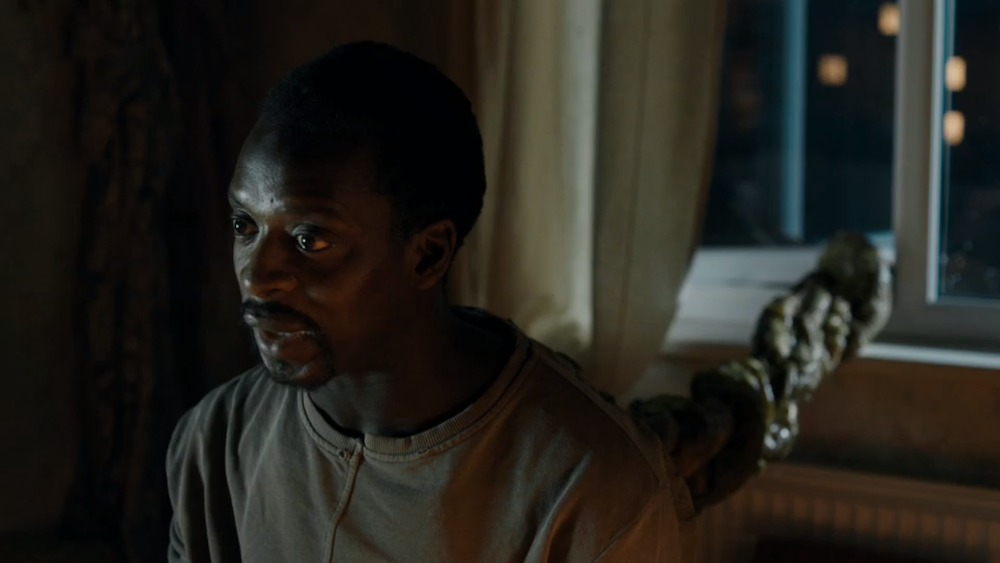 On Internet streaming platforms, “Nightvisiting.” It is here the cracks begin to show for Class. It’s not that “Nightvisiting” is bad. Its ending is slightly misjudged (having Tanya’s effort fail so that Miss Quill can get a hero moment driving a bus into a tentacle mostly serves to ostentatiously deny the black girl an earned hero moment so the femme fatale white woman can get an unearned one), but on the whole it’s a perfectly reasonably constructed thing. It’s an effective execution of “the cheap one,” getting most of its mileage out of human actors in rooms talking with a minimum of effects shots and scheduling hassles.

The problem is that this is episode three, and functionally episode two because of the (increasingly clearly bad) decision to bundle “For Tonight We Might Die” and “The Coach With the Dragon Tattoo.” Plenty of shows have resorted to the “cast members are visited by their dead loved ones” episode. But it’s generally a late-series contrivance—something you throw out to put your longstanding characters in a new light. Doing it as episode three in order to substantially introduce and flesh out two of the characters, on the other hand, feels desperate. And indeed, it leads to mixed results. Quill’s scenes with her sister are shockingly devoid of content, adding exactly no depth to a character who risks being a cartoon. And Tanya does only slightly better. There’s some decent character beats for her, but they’re all origin story stuff, and generally don’t relate to the character as we see her. The origin of her “puddle” nickname is indicative. Not only is there something slightly unsettling about the fact that Tanya’s nickname is based in a story in which she dives into a puddle of horse piss, this never comes up outside of this story and doesn’t actually tell us anything about who she is.

A larger problem, though, comes in the form of Tanya’s basic arc in this episode. Last week Ram engaged with his grief and trauma and used an articulable lesson about it to defeat an enemy who was thematically adjacent and mirrored his previous inadequate response to the trauma. It was smart and well-structured. Here… well we’ve already talked about the fact that the endpoint of her arc is a dramatic but futile action that fails to defeat the monster. But it also doesn’t extend from anything. She attacks the monster with her anger at her father for dying, an anger that apparently exceeds her grief. But what’s the lesson here? Healthy mourning is angry instead of sad? Tanya doesn’t actually have an arc in this. Because she’s the designated clever one who fills the Doctor’s role of answering questions she starts off skeptical of the Lan Kin and never really moves from that position. The tension is over “will she do the thing the audience knows is dumb.” She doesn’t, and then Miss Quill actually saves the day. Thematic unity it ain’t

But there’s a still larger problem going on here. “The Coach With the Dragon Tattoo” worked because it was a moving and clever exporation of trauma. But here we’re doing the same thing: exploring Tanya’s reaction to grief and loss. In fact, we’re basically doing that with everyone. April reveals the trauma of her father’s attempted murder-suicide. Charlie and Quill continue to be defined by their traumatic losses. Even Matteusz, hastily tacked on here as one last main character, is given an origin trauma in being thrown out by his parents. This is, demonstrably, a show about trauma.

For all that the episode is a misfire, however, it’s still only narrowly so. Indeed, one of the things Class often ends up demonstrating is how narrow the line between TV that works and TV that doesn’t quite actually is. Because despite these significant flaws, “Nightvisiting” has a lot to admire. For all that her plot fails to arrive anywhere, what Tanya actually does in this episode is smart. Class uses its trope-aware characters well, opting not to have Tanya be oblivious to the threat of the Lan King but instead to be suspicious and rational about it. She plays the Doctor role of figuring out how things work, but she does it by asking the questions the audience has, an interesting splitting of the difference between the Doctor and the companion. Ram continues to be satisfying as well—his complete “nope”ing out of the confrontation with Lisa is a great character beat, and sets up the best scare in the episode, when the video call glitches and we get to see Lisa suddenly approach the laptop screen. (Really the show’s use of video calls is in general good—there was some solidly shot stuff in “The Coach With the Dragon Tattoo” along those lines too.)

In the end it’s only a couple of small things that stand between this and working. Redoing Quill’s scenes so that we actually learn something about her and restructuring the ending so that Tanya contributes to the Lan Kin’s defeat would solve almost all your non-April problems, and the April stuff would be fairly small potatoes given that. You’d still have a show that was weirdly over-focused on trauma, but that’s a longer term problem and could have been addressed. And in terms of this episode at least, fixing Quill’s involvement, both in the buildup and the resolution, would have been sufficient to make it basically work. Something like this will be true of the remaining four Class stories, which are mostly similarly not far off from working.

This is an odd place for a Doctor Who spinoff to be. The Sarah Jane Adventures generally worked, albeit within the narrowed horizons of its ambitions. Torchwood was generally a sloppy and ill-advised mess with the fleeting exception of when Davies actually paid attention to it for five episodes straight. But Class sits somewhere else, not good enough to praise, not bad enough to mock, perpetually and agonizingly on the cusp of being a good show without ever threatening to cross the line. I’ve struggled with the extended coverage of all of the spinoffs, in part because by their nature they do not, like Doctor Who, casually create entire worlds each week that I can take apart. The blog inevitably strays more towards reviews on those entries. Which is even more frustrating here.

But from my perspective—and I think this is one with an effect on the overall quality of the show as well—the problem is made worse by what this show does instead of creating new worlds each week, which is to create a landscape that’s recognizable from and understandable exclusively in terms of existing television. People in the comments have been noting the degree to which Coal Hill Academy appears to be closer to an American high school than anything in Britain. But it’s not even that. It’s a show that takes place in the TV image of an American high school. And unlike Doctor Who, it can’t switch what television show it takes place in, forced instead to make a deeper and deeper dive into the phantasms of imagery.

And “Nightvisiting” suffers from that more, perhaps, than any other episode because it’s the one that tries to go beyond the veil for these characters when there’s just not anything there. It’s an episode based entirely on interiority and the individual psychologies of these characters, and what it ends up doing instead is wandering behind the set to where you can see the unfinished plywood and really register that it’s all just iconography without depth. None of these are people. They’re tropes spouting a variety of lines about trauma, some of them insightful and clearly based on grappling with the lived experiences of traumatized people, but all wildly short of content. And more than a few nips and tucks to the show’s dramaturgy on individual epsiodes (though that would help too) this is the real thing it could have and should have done. If this were a show about teenagers—one rooted in actual characters and an actual sense of place—then all of its instincts would flourish. I’m not even suggesting radical reconceptualizations of the characters or vast transformations to the plots. I’m just suggesting that in 2016 it might have been a good idea to make a show about people instead of about how much Patrick Ness liked Buffy the Vampire Slayer.