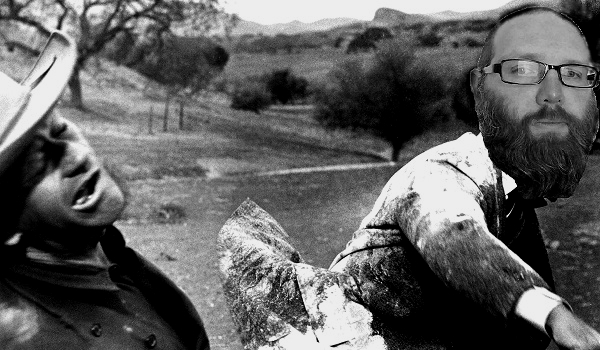 First, the Orlando shooting massacre happened. Then we had some issues with an Oi! Spaceman recording. Then some personal issues kept us away from the microphones for a few days. Long story short, I don’t have a lot of new content for you this week. The only new episode anywhere in the Oi! Spaceman family was this intermission episode I did by myself over on They Must Be Destroyed on Sight, discussing three of the Westerns that James and Kevin have chatted about in their last two episodes, all of which I’d seen for the first time: The Hanging Tree, My Darling Clementine, and The Man Who Shot Liberty Valence.

The Western genre is very much about the limnal space between the ideals of “civilization,” (as problemmatic as the term can be in any context) and those of “open range.” Namely: how do we as a society deal with bad actors in our midst, with violence committed by those in our communities. Should we respond to violence with more violence, or are there other (more “civilized”) ways of responding? These ideas were very much on my mind when I recorded the episode, as I recorded it the evening after the murder of fifty queer people during Pride week, and I definitely referenced the news when discussing the films. It’s a quiet episode; I was emotionally raw (partly from arguing with alt-right kiddy-Nazis on Twitter) and more than a little numb. Go give it a listen; I’m sure some of the questions of masculinity and femininity in classic Westerns will come up again in a future essay I write in this space.

Given that Oi! Spaceman is new to this site, I thought I’d take the opportunity of a light programming week to show off a few episodes I’m particularly proud of. Phil has basically brought us on to talk about sex and gender, so I should probably point out our most sex-heavy episodes. The first is our Series 8 recap, called “An Abusive Polyamorous Triad,” in which we examine the Doctor/Clara/Danny dynamic through the lens of polyamory. (That’s also the episode where we officially “came out” and so we talk a bit about polyamory in general there for the curious.) More recently, we discussed the 2015 Christmas Special in “Genocide and Polyamory,” which is pretty much exactly what it sounds like. That’s the one where I briefly discuss my vision of the sexual prowess of the various New Who Doctors, by the way, while Shana very audibly rolls her eyes.

Away from the sexy talk, I’m quite proud of our Daleks’ Master Plan discussion, which I called “Missing Episodes and Moral Culpability,” and borrows heavily from Phil’s old Tardis Eruditorum entry on DMP. Our chat about The Ribos Operation, “One Day, Even Here…” is also one I like a lot, and since that one both references criticisms Jack made of our discussion of The Invasion of Time and references his excellent piece on The Ribos Operation quite heavily, fans of Jack may want to give that one a whirl.

No discussion of recent Oi! Spaceman that’s moved people is complete without a mention of our recent bonus episode on Chasing Amy, which in my clunky way I called “The Dream of 90s-Era Sexual and Gender Politics is Alive.” If you love Shana as much as I do, it’s a tough listen (she cries), but it’s probably the most us thing we’ve put out to date.

New fans of TMBDOS might enjoy some of our recent discussions on crime and noir films that we did this spring. It got started properly with a chat about Robert Altman’s The Long Goodbye from 1973, and later we discussed another Marlowe adaptation with The Big Sleep, both the 1946 and 1978 versions. (One of those is vastly superior to the other, by the way.) I also take a decent stab at summarizing the labyrinthe plot of The Big Sleep, which is probably worth a click by itself.

One of my favorite episodes we’ve done to date on TMBDOS was our discussion of two Laird Cregar films from 1944/1945: The Lodger and Hangover Square. It kind of became a bit of a referendum about what noir really means as a genre and a style, and went off in some interesting directions regarding mythic figures from fiction like Sherlock Holmes and, yes, Superman. The films themselves are criminally underseen, and if anything I hope that episode inspires some listeners to go check them out.

Next week with any luck we’ll be returning to Searching For Fuchal with a discussion of Waiting For God, and I’m hoping to finally get our second Big Damn Shiny Heroes up, covering the second episode of Firefly: The Train Job.