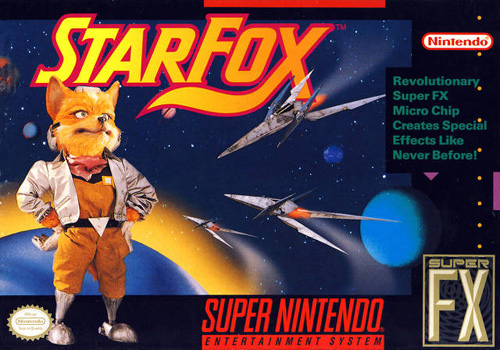 Quietly and behind the scenes, far from the watchful eyes of most of us, Nintendo was systematically fucking absolutely everything up. The long term result of this would eventually be the cataclysmic end of Nintendo’s dominance over the video game industry. The short term result was Star Fox.

The problems began, in many regards, in 1988 when Nintendo partnered with Sony to create an add-on for the SNES using the newly standardized CD-ROM format. This was by and large a defensive move – NEC had a CD-ROM expansion for the TurboGrafx-16 out in Japan in 1988, and it reached the US in 1990, becoming integrated in the standard release of the console in 1992. Work on a CD peripheral for the Genesis began almost as soon as the format was standardized, and saw Japanese release in late 1991, coming out in the US a year later and immediately attaining infamy due to having Night Trap as a launch title. And so Nintendo essentially had to follow suit.

The device was to be announced in the summer of 1991 at the Consumer Electronics Show in Chicago. But shortly before the announcement Nintendo president Hiroshi Yamauchi got cold feet over the degree to which the deal with Sony would give them licensing control over the new CD format. Since control over the cartridge supply had been a key plank of Nintendo’s business model, especially in the US where the “Seal of Quality” was a rhetorical device to counter fears of an Atari-style crash, this was ultimately deemed unacceptable. And so Nintendo made an audacious move, quickly arranging a new deal with Phillips and announcing it at CES the day after Sony unveiled their “Play Station,” which would combine a SNES cartridge slot and a CD-ROM drive.

Almost every part of this went badly for Nintendo. Sony eventually repurposed their CD unit into the stand-alone Playstation, decisively winning the fifth generation of console. The Phillips device never materialized (and indeed Nintendo would not release an optical-disc system until 2001), but as a consequence of that deal Phillips was allowed to release a raft of shovelware featuring Nintendo properties for their moribund CDi system. And worse, the Super Nintendo had no upgrades that would allow it to compete with its rivals on technical grounds for the remainder of the 16-bit era.

The response to this state of affairs was the Super FX chip, designed by British developer Argonaut Games, who produced it to enable a Super Nintendo version of their acclaimed Starglider series. The chip was a cartridge-based auxiliary graphics processor for the Super Nintendo that dramatically increased its ability to handle 3D graphics.

Implicit in this is a vision of the future, namely that video games would someday be 3D. This is a significant change from how basically all games on the NES and, thus far, the SNES had worked. Those games had all been based on two-dimensional sprites. This was the technological innovation offered by Mode 7 at the SNES’s launch – a new set of ways of manipulating sprites that allowed for things like Super Mario Kart where the track was, in reality, a background layer being manipulated via Mode 7, with the actual cars just being sprites that were resized up and down to produce the illusion that the car was moving forward or background.

This was just one of the numerous optical illusions for creating pseudo-3D that existed. But full 3D was a different kettle of fish – one that would fundamentally change the basic dynamics of video games. It was the switch towards 3D as much as any actual stagnancy in the genre that led to the platformer’s post-SNES decline. The platformer is an intrinsically 2D genre, in which the screen is a surface upon which things happen. 3D, on the other hand, puts video games into the same visual grammar as cinema. But crucially, this was, in 1993, still an almost entirely proleptic understanding of video games. 3D existed, more obviously in PC gaming where Wolfenstein 3D and The 7th Guest were making massive waves, as was the Virtuality arcade platform, where you could pay several dollars to play a bad shooter like Dactyl Nightmare for a few minutes, but there was nothing like a model for how these games were going to work, quite unlike platformers where you could knock together a game out of nothing but cliches.

One thing that was clear, however, was how 3D graphics would work: polygons. Basically, you make 3D graphics by building the thing you want out of 2D polygons, which can then have textures applied to them to provide things like color. These days one rarely has one’s attention drawn to the polygonal nature of 3D graphics, due largely to the quality of textures used, the sheer number of polygons a modern system can handle, and the creation of standardized tools to handle much of the heavy lifting of design.

But in 1993 polygons were the visible evidence of the future, and thus a thing to be highlighted. Which was for the best, because even with the Super FX chip there wasn’t a ton you could actually do. Star Fox, as the Starglider remake was eventually renamed (with Shigeru Miyamoto overseeing design), demonstrates this – it’s a game drenched in polygons, but never too many of them. The game’s most iconic visual image, the Arwing fighter, is blatantly designed to use a bare minimum of them, and they’re all monochromatically filled instead of offered any sort of texture. All of this drew attention to the polygons, creating a game whose main function was to scream “3D GRAPHICS!” at the player as loudly as possible. 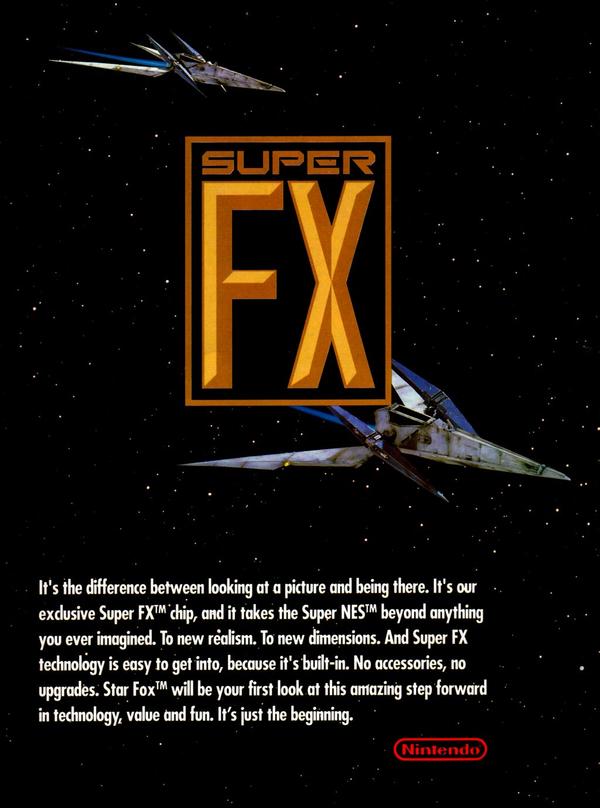 This set up something of an odd problem, as evidenced by the above ad. Simply put, the Arwings didn’t really look very much like the pictured Star Wars-style weathered and beaten metal. They looked like polygon-based computer graphics. There was next to no experience of “being there,” as the ad copy would have it, and no realism to speak of. (Indeed, Miyamoto opted for anthropomorphic aliens specifically to move away from realism.) It was adamantly and entirely a game about looking at a picture. This is not to say that it’s a bad game. It was good enough to deserve its major sales push, and it’s an understandable classic, although to be honest the limitations of the graphics make it a chore to parse what the fuck is going on much of the time. (And I remember this being my view at the time; my reaction to the entire marketing campaign was roughly “why should I be excited about these polygons, they look awful.”)

But actual immersiveness wasn’t the point. The point was to look like the future, and the future had a well-established look. The primitive polygon graphics were imposed by a technological limitation, yes, but they were a clear aesthetic as well – the aforementioned Virtuality systems had similar graphics, as did any “virtual reality” sequence on television.

And so Star Fox succeeded at its only real goal, and managed to be a decent game to boot – it announced the imminent arrival of the future. It wasn’t even wrong about the future, at least on any technical level; as mentioned, it really was all polygons, although their ostentatious visibility would progressively fade. But like any vision of the future, it was at its heart a lie, and the reality was that everything was going to come crashing down.