The Proverbs of Hell 10/39: Buffet Froid 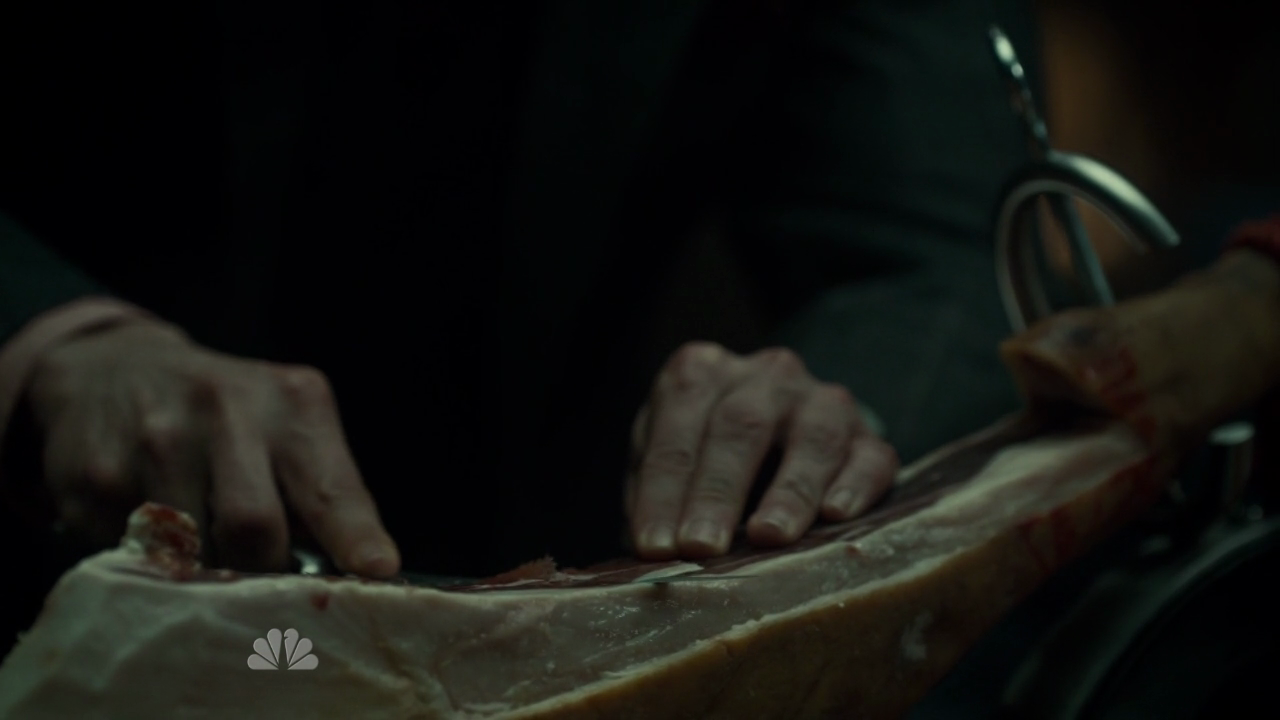 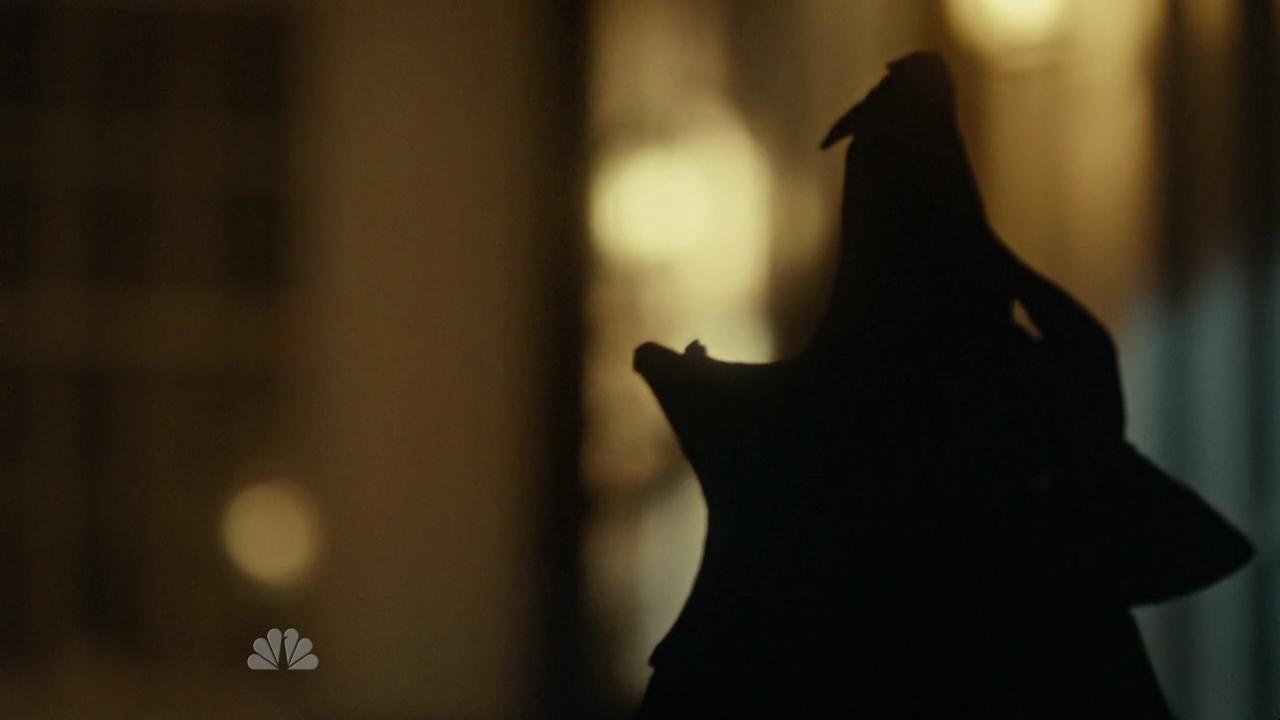 It goes without saying that there is a strange unreality here, but this is presented very differently from how Hannibal usually proceeds. It’s never before had to conjure a disposable POV character just to kill her off a few minutes later. Part of this is the peculiarities of Georgia Madden – she’s unsuitable to be a POV character herself, and there’s only one other choice. But a more basic reason is that this is the opening of a horror movie, with Madden being positioned as something that comes at the show from an odd angle She doesn’t quite belong in this series. Unlike with “Œuf,” a previous case of a killer of the week who’s not quite right for Hannibal, this is something the show is at least conscious of  this time. 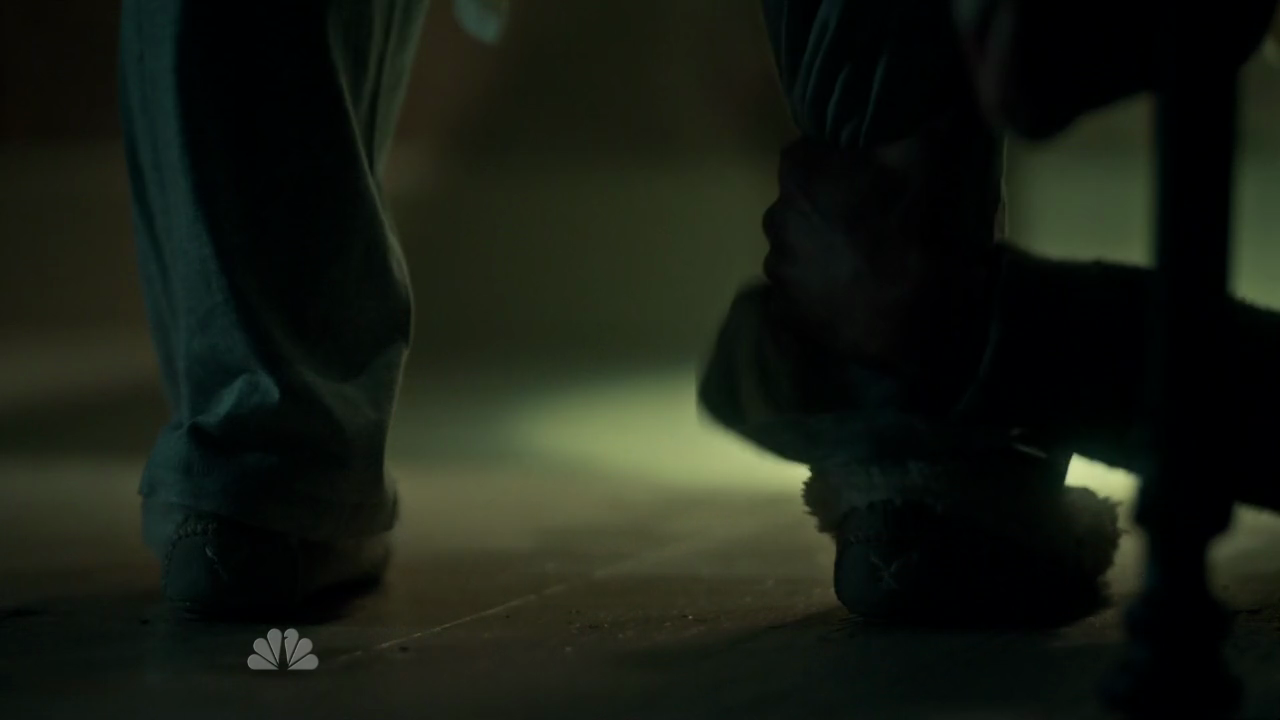 I leave you to your own conclusions.

HANNIBAL: We both know the unreality of taking a life, of people who die when we have no other choice. We know in those moments they’re not flesh, but light and air and color.

WILL GRAHAM: Isn’t that what it is to be alive.

Hannibal’s line here is a characteristically interesting blend of deceit and honesty. His account of people becoming “light and air and color” is quite untethered to the handful of instances of actual necessity in which Hannibal has killed someone, and for that matter an unusual description for Hannibal, whose victims are pointedly never “not flesh.” Some explanation is offered by the source, which is unsurprisingly the Thomas Harris novels, where a similar account is given by Francis Dolarhyde, who describes killing this way while projecting this assessment onto Hannibal. Its repurposing into a half life with which Hannibal ensnares Will into mutual aesthetic appreciation is clever. 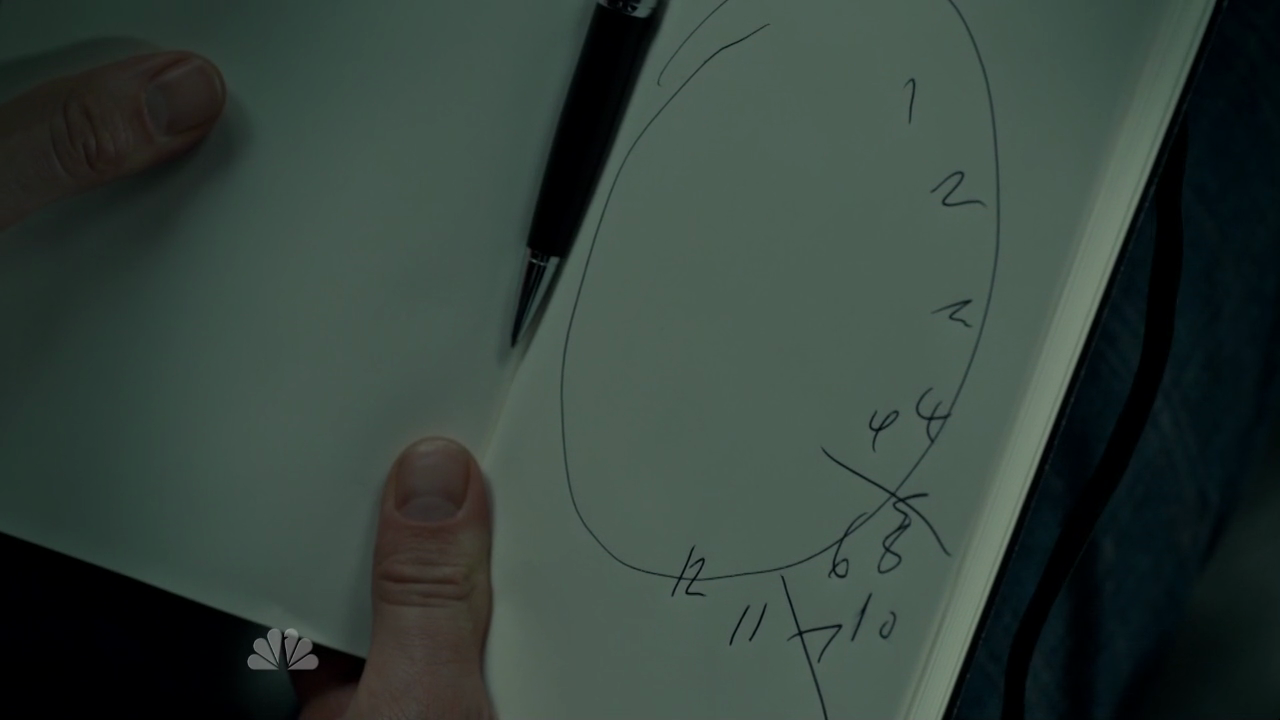 The misdrawn clocks are one of the defining images of the latter part of the first season – an immediately arresting image that communicates wrongness and sinister intent without actually having anything overtly horrifying about them. In this regard they are much like the trypophobic food designs, the cluster of numbers and vast expanse of white space both communicating a sense that this is not right even beyond the contextual horror of Hannibal’s manipulations, which are suddenly revealed to be far more advanced than the audience had realized. Note, of course, the consistent feature of Will’s breakdown: the decoherence of time.

WILL GRAHAM: I thought I was responsible for it.

JACK CRAWFORD: You thought you killed that woman?

WILL GRAHAM: Sometimes with what I do —

JACK CRAWFORD: What you do is take whatever evidence there is and extrapolate. You reconstruct the thinking of a killer, not think you are a killer.

WILL GRAHAM: I got lost in the reconstruction. Just for a second. Just a blink.

Jack’s attempt to decree how Will actually engages with crime scenes is at once naive and clumsy in its wishful thinking, both to a greater degree than we might expect from Jack. But the episode’s high stakes execution of the Todorovian fantastic is notable, especially for the way in which each side of the tightrope is itself balanced between madness and the supernatural. As Will’s breakdown gets pushed towards an actual medical explanation, we get a killer with the most overtly supernatural-seeming pathology to date. More than that, each side of the tightrope is itself a Todorovian ambiguity – Will’s encephalitis could well have a supernatural cause, just as Georgia could have a medically diagnosable condition. The fractal nature of this tension, of course, serves to highlight the show’s underlying rejection of the madness/supernatural binary.

WILL GRAHAM: Thought the reason you have me seeing Dr. Lecter and not an FBI psychiatrist is so my mental wellbeing stays unofficial.

JACK CRAWFORD: Have I broken you?

WILL GRAHAM: Do you have anybody that does this better unbroken than I do broken?

In which Hannibal’s manipulations have an unexpected and, to his eyes, entirely counterproductive side effect. Although one imagines that Hannibal would not find Will’s demonstration of the limitations of Jack’s concern quite so rude as Jack’s exploitation of Will.

WILL GRAHAM: There’s a grandiosity in the violence I imagined that feels more real than what I know is true.

HANNIBAL: What do you know to be true?

WILL GRAHAM: I know I didn’t kill her. Couldn’t have. But I remember cutting into her. I remember watching her die.

HANNIBAL: You must overcome these delusions that are disguising your reality.

Grandiosity is by its nature more real than mere knowledge, at least within the context of Hannibal. Which neatly begs the question of exactly what Hannibal considers to be the disguising delusions here. Certainly he proceeds to blur the line actively, swerving from this into a question about Georgia’s “savage delusions” and then back to Will, purposely collapsing the distinction between Will and the people he empathizes with. Note Will’s account a few lines later: “I caught a glimpse of myself in the mirror. I looked through me, past me. Like I was a stranger.”

HANNIBAL: It has heat. A fevered sweetness.

Fictional counterfactuals are generally a mug’s game best left to incompetent high school English assignments. Fiction, being the product of authorial design, rarely supports the thought experiment of “what if things had gone differently” with anything other than the erosion of dramatic unity. All of which said, the question of where Will and Hannibal’s friendship would have gone if he’d had a less appetizing disease is, if not interesting, at least funny.

HANNIBAL: It’s so rare to be able to study the psychological effect of this type of malady on a person’s mind.

HANNIBAL: A doctor has to weigh the ultimate benefit of scientific study. Even in these times, we know so little about the brain. There are great discoveries to be made.

Hannibal, of course, does not give a fuck about these discoveries, and in fact Sutcliffe’s acquiescence to his manipulation for what is, in his opinion, such a vulgar motive is likely at least part of why Hannibal decides to murder him. Still, Hannibal clearly wants to allow Will’s illness to play out further, presumably because hiding encephalitis from Will is an easier lift than constantly dosing him with psilocybin.

HANNIBAL: The problem Will has is too many mirror neurons. Our heads are filled with them when we’re children. Supposed to help us socialize and melt away. But Will held onto his, which makes knowing who he is a challenge. He’s always reflecting those around him.

HANNIBAL: When you take him to a crime scene, Jack, the very air has screams smeared on it. In those places, he doesn’t just reflect, he absorbs.

Echopraxia is the contentless repetition of speech and movements, this line being one of the few surviving references to the originally intended character trait that Will would pick up the speech patterns of whoever he was talking to. Mirror neurons are an actual hot concept in neuroscience, though exactly what they do is still up in the air. The idea that they provide a biological basis for empathy, however, is a fairly mainstream theory.

These flirtations with actual scientific explanations, of course, are juxtaposed with a quote from Thomas Harris in the form of “the very air has screams smeared on it” so as not to let things get too grounded in reality.

HANNIBAL: Have you considered Cotard’s syndrome? It’s a rare delusional disorder in which a person believes he or she is dead.

The medically grounded explanation for Georgia’s condition is tacitly shared with the film Synecdoche, New York, where the main character’s name is Cotard. I have never written about that film, alas.

HANNIBAL: For Iberico, only a few pigs are selected each year. But is the pig, once fattened and slaughtered and air cured, superior to any other pig, or is it simply a matter of reputation preceding product?

DR. SUTCLIFFE We know how Iberico chooses his pigs. How did you choose yours?

HANNIBAL: Are you referring to Will Graham?

Sutcliffe’s answer is straightforwardly wrong, both in the sense that Iberico ham is simply unlike any other ham in that way that any real artist’s work is unlike any other artist’s (I’ve had it, in fact, at the Office in Chicago, one of the most exquisitely memorable dining experiences I have ever had, though as with this the crucial third factor of the chef rears its head), and in the sense that it is clearly not the answer that Hannibal is looking for.

HANNIBAL: Will Graham has a remarkably vivid imagination. Beautiful. Pure empathy. Nothing he can’t understand and that terrifies him.

DR. SUTCLIFFE: So you set his mind on fire.

HANNIBAL: Imagination is an interesting accelerant for a fever.

Hannibal’s statement here, on the surface, only makes sense if you reverse it. The fundamental nature of his experiment is to use Will’s encephalitis to explore the furthest reaches of his empathy. But Hannibal also seeks to accelerate a fever – to expose Will to some sort of transformative experience via his imaginative faculties.

Sutcliffe’s phrasing, on the other hand, appears to blame Hannibal for the encephalitis itself, as opposed to merely for the consequences of his sadistic experiments with the illness. 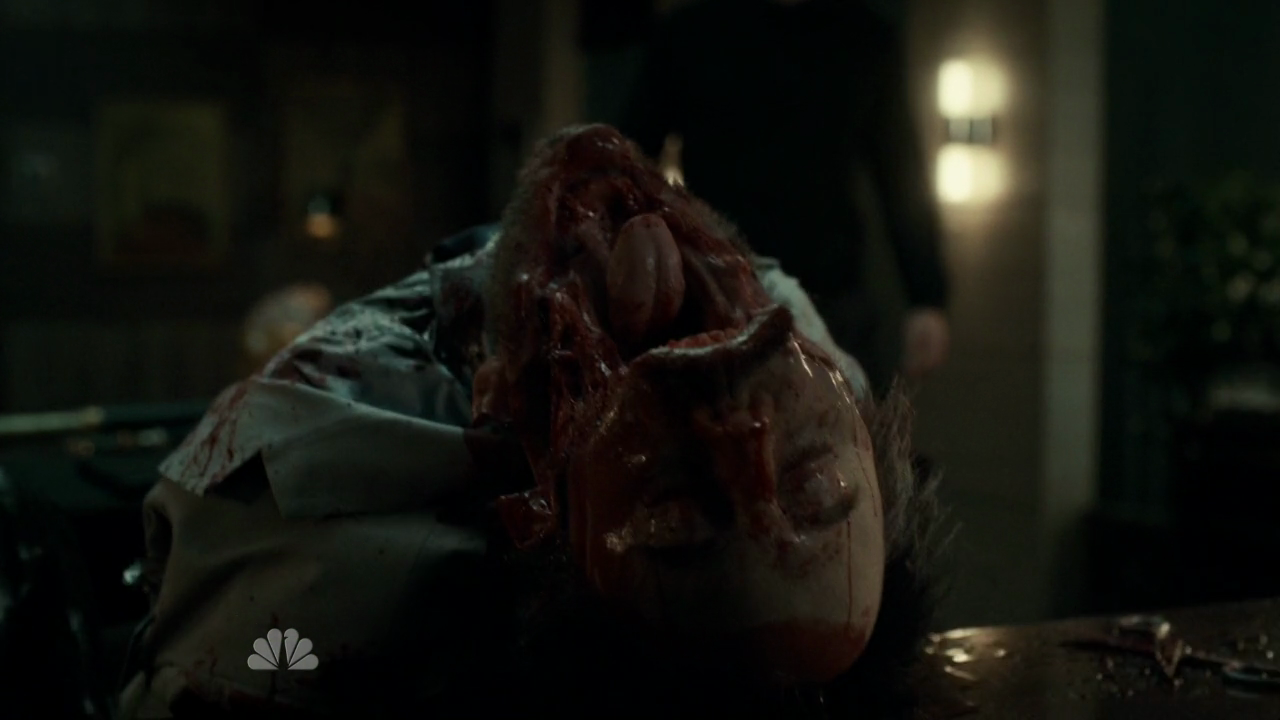 It’s less flashy than some of Hannibal’s conceits, but having everyone in the doctor’s office brutally murdered by some sort of monster while you’re in an MRI tube is a properly good bit of horror.

WILL GRAHAM: I see you, Georgia. Think of who you are. It’s midnight. You’re in Wolf Trap, Virginia. Your name is Georgia Madchen. You are not alone. We’re here together.

GEORGIA: Am I alive…?

A well-done and tidy emotional beat, as Will, in spite of his own decohering reality, is able to provide an anchor for Georgia specifically because he can empathize with her, even using the same grounding technique that Hannibal is manipulating him with.

(An in-joke for Bryan Fuller fans, Georgia Madden is played by Ellen Muth, who previously starred as Georgia Lass in Dead Like Me.) 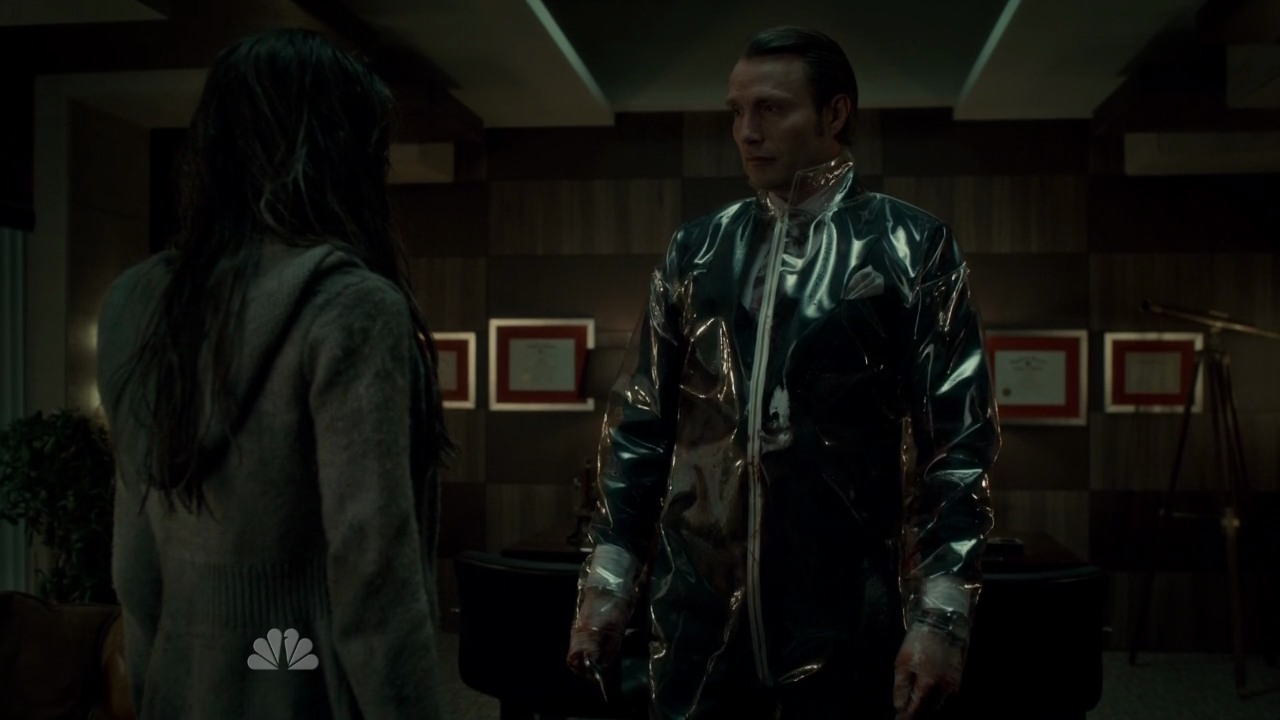 The first appearance of Hannibal’s murder suit (he doesn’t use it when killing the medical examiner in “Sorbet”), which, layered over his immaculately tailored three-piece suit, is a consistently hilarious visual image. This sequence also highlights a feature of Fuller’s specific conception of Hannibal, which is that he is a creature of whim as opposed to of meticulous plan. He’s killing Sutcliffe primarily as a precaution (as evidenced by his decision to do it as a forgery), and, when confronted by Georgia herself in the act simply hands her the murder weapon and walks off, a smooth and graceful improvisation.

The Pyramid at the End of the World Review Myriad Universes: Ill Wind Part Four