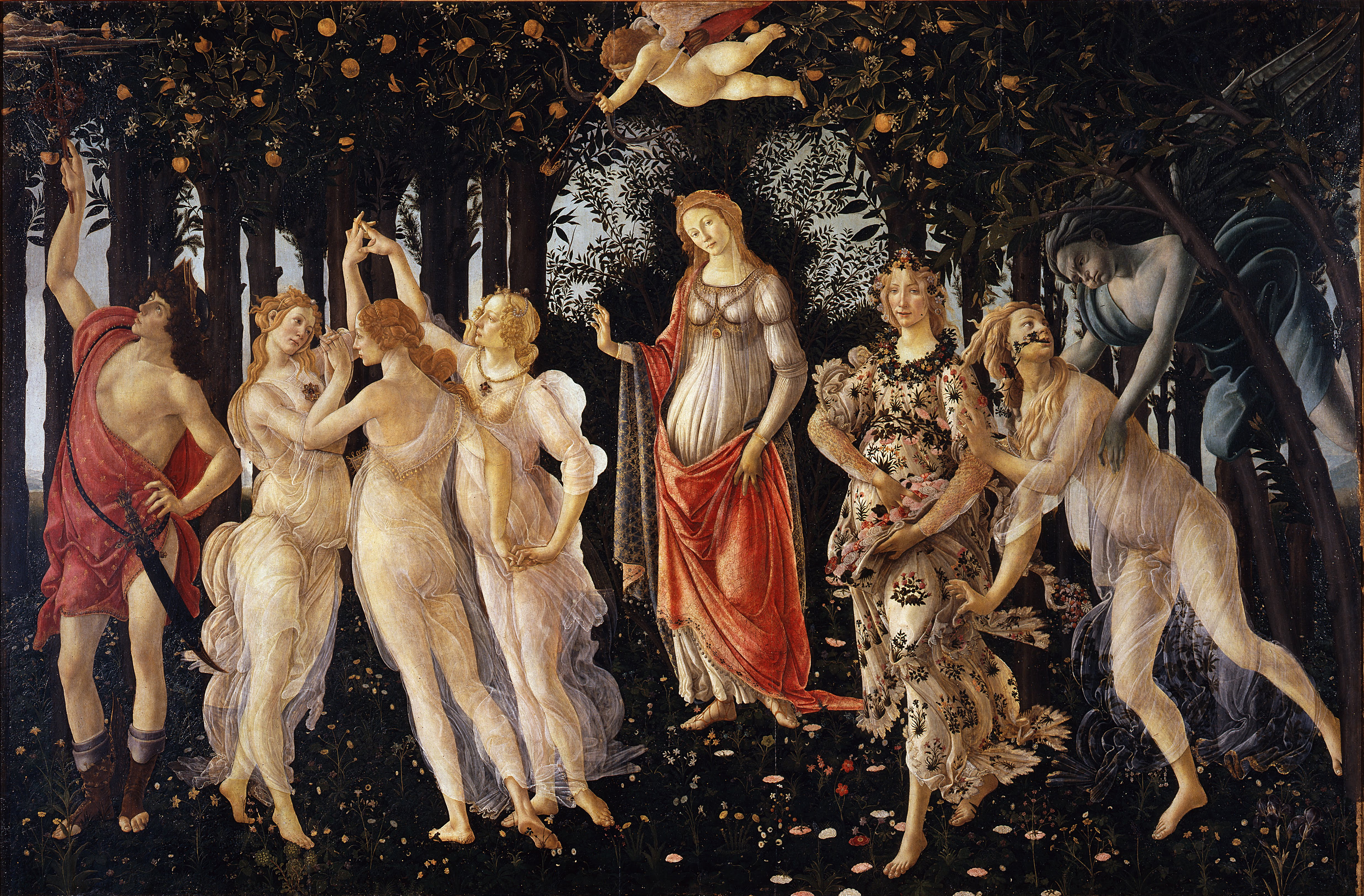 PRIMAVERA: Hoo boy. OK, so the course of an Italian menu between antipasto and secondo is supposed to be “primo.” This is often a pasta course, but can also be a risotto, a soup, or some similar hot course. One such dish certainly could be pasta primavera, which is a pasta and vegetable dish that takes its name from the Italian word for spring, which is “primavera.” This dish, however, is not actually Italian – it’s an American dish dating to the 1970s and likely first prepared in Nova Scotia. And more to the point, “primavera” on its own is not actually a food word at all. In fact this episode belongs more to the titling scheme of the second half of the season, as we’ll see in a bit.

HANNIBAL: I let you know me. See me. A rare gift I’ve given you. But you didn’t want it.

WILL GRAHAM: Didn’t I?

HANNIBAL My freedom, then. You’d take that from me. Confine me to a prison cell. Do you believe you could change me the way I’ve changed you?

WILL GRAHAM: I already have.

HANNIBAL: Fate and circumstance has returned us to the moment when the teacup shatters. I forgive you, Will. Will you forgive me?

The lengthy reprise of “Mizumono” (the episode does not actually get to new material until around six minutes into it) serves two purposes. First, it addresses the very large “we have no money” problem that Hannibal had acquired by effectively cutting 10% of the episode and replacing it with already filmed material. Second, it reframes the end of “Mizumono” from a cliffhanger to the commencement of an action with an inevitable conclusion, a sense tacitly echoed by the quasi-palindrome of Hannibal’s final line. 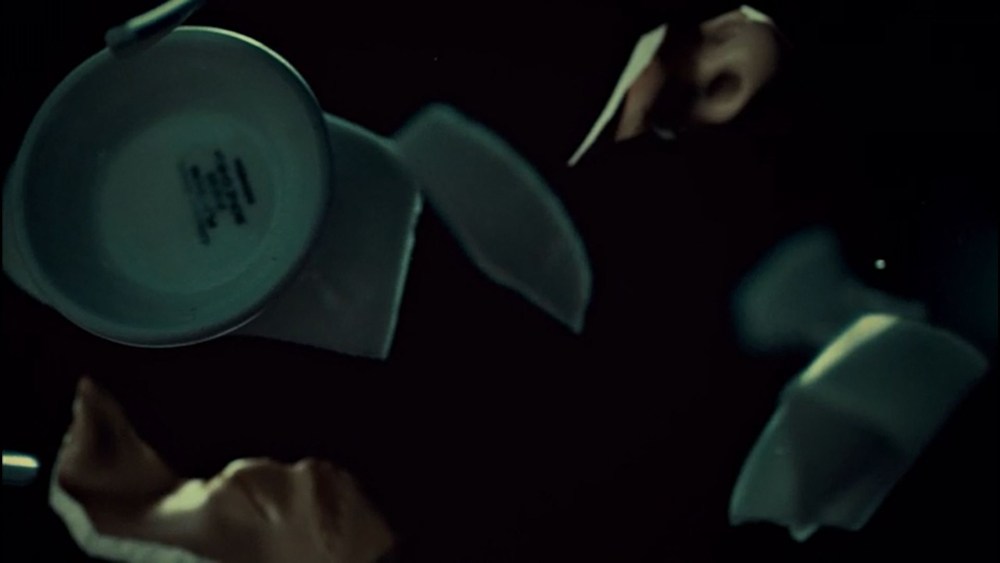 “The third season is the best one” is one of those straightforward critical opinions that doesn’t seem to need extra justification. Part of this is the doomed yet noble way that Fuller responded to the increasing pressure of the show’s declining ratings. Sure, Season Three offers the nominally saleable hook of directly adapting two Harris novels, but it also does shit like an archly symbolic shot of a shattering teacup that then reforms into Will Graham’s face, casually expecting that viewers will take this in stride. The ones that remained did.

ABIGAIL HOBBS: Having a hard enough time dealing with this world. Hope some of the other worlds are easier on me.

WILL GRAHAM: Everything that can happen happens. Has to end well, and it has to end badly. Has to end every way it can. This is the way it ended for us.

ABIGAIL HOBBS: We don’t have an ending. He didn’t give us one yet.

Compare Will’s version of the many worlds hypothesis to Blake’s Eternity – a simultaneity existing outside of time in which all things happen at once. Given Blake’s commitment to incommensurability, it is clear that Eternity consists not only of all events but all possible versions and visions of events. Abigail, meanwhile, clearly resists this interpretation, asserting Hannibal as an author figure who privileges one ending over another.

ABIGAIL HOBBS: If everything that can happen happens, you can’t really do the wrong thing. You’re just doing what you’re supposed to do.

Abigail offers a savvy critique of the many worlds hypothesis (albeit one that probably does not apply to Blake’s conception of Eternity, which is rooted more in variations of vision than in the idea of different chains of events taking place). Although the conclusion she comes to is essentially the moral worldview of Alan Moore’s Jerusalem, so I suppose one can’t fault it too hard. 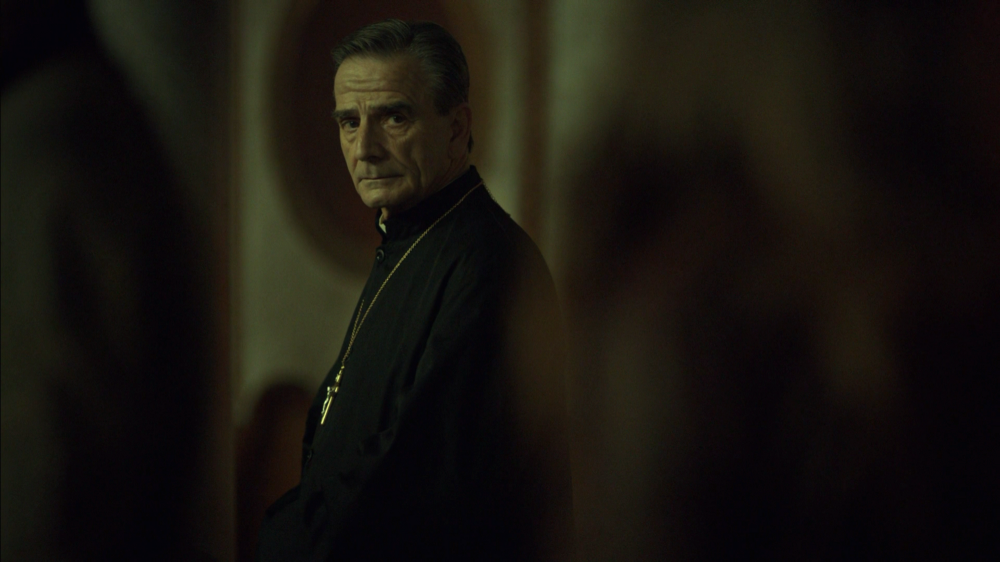 Hannibal, at baseline, is a show with an eccentric notion of reality and space. This, however, is perhaps its most astonishing moment. Abigail, as we’ll learn later in the episode, is dead, and Will is simply imagining her company out of an apparent need for a Watson. And yet we get this shot of a priest who is clearly looking straight at her, thus lending seeming objectivity to something the show is explicit is not real.

ABIGAIL HOBBS: Do you believe in God?

WILL GRAHAM: What I believe is closer to science fiction than anything in the Bible.

ABIGAIL HOBBS: We all know, but no one ever says Gdash-D won’t do a G-dash-D-damned thing to answer anybody’s prayers.

WILL GRAHAM: God can’t save any of us because it’s inelegant. Elegance is more important than suffering. That’s His design.

ABIGAIL HOBBS: You talking about God or Hannibal?

WILL GRAHAM Hannibal’s not God. Wouldn’t have any fun being God. Defying God, now that’s his idea of a good time. Nothing would thrill Hannibal more than to see this roof collapse mid-mass, packed pews, choir singing. He would just love it. And he thinks God would love it, too.

Possibly my favorite exchange in the entire show. For me, no moment captures the “fuck it, let’s just make the show we want” attitude of Season Three quite like Will casually profiling God. Extravagant ambition done as a throwaway line via reference to a series catchphrase. This is crack to me. But that’s not even the only fascinating part of the exchange.

Will’s “closer to science fiction” comment is most straightforwardly read in light of his many worlds idea earlier in the episode, but the framing of it as science fiction makes it intriguingly impersonal, removing the idea of a consciousness and, with it, an actual design. (Although in light of profiling Him a few lines later, one is tempted to suggest Will’s retreat to science fiction is more wishful than substantive.)

Finally there’s the “defying God” section. That Hannibal would rather be Luciferian is hardly a surprise – note the image used for last week’s post, after all.  (I could have picked a food one, but no.) But the bit about thinking God would like a church collapse points to a far more enticing idea given Hannibal’s obvious and oft-demonstrated love of temptation and of turning people on to new appetites – the idea that Hannibal lives his life in order to convert God to his way of thinking. 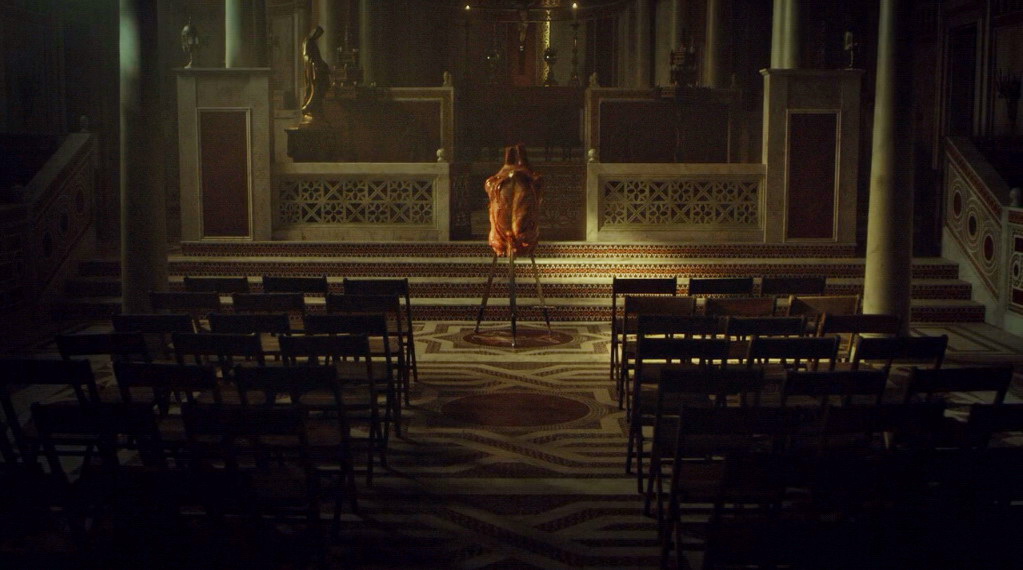 Hannibal’s broken heart, as Will points out. And as mx_mond pointed out in the comments on “Antipasto,” it is mounted on three swords so as to evoke the Three of Swords in Tarot, a card generally associated with heartbreak. Which I’d have gotten to, but fine. He can have credit, and I’m almost definitely not going to kill and eat him for it.

WILL GRAHAM: I’ve got the scars of a man who grabbed his gift by the blade.

INSPECTOR PAZZI: You grabbed the wrong end. Those moments when the connection is made, in that synaptic spasm when the thought drives through the red fuse, that is my keenest pleasure.

The equation of imagination with knowledge might be the most Blakean thing in the season, which is saying a lot. But there is also a clear element of the Faustian in Pazzi’s doomed quest for knowledge. (See also Hannibal’s stated contempt for Faust in the next episode.)

INSPECTOR PAZZI: Il Mostro, the Monster of Florence. It was his custom to arrange his victims like a beautiful painting.

The Monster of Florence was a real serial killer, although the details as presented here differ sharply from the actual case, most notably in the addition of murder tableaus (although the real case did feature the taking of body parts). The tableau presented – based on Botticelli’s Primavera – provides a rare title drop. 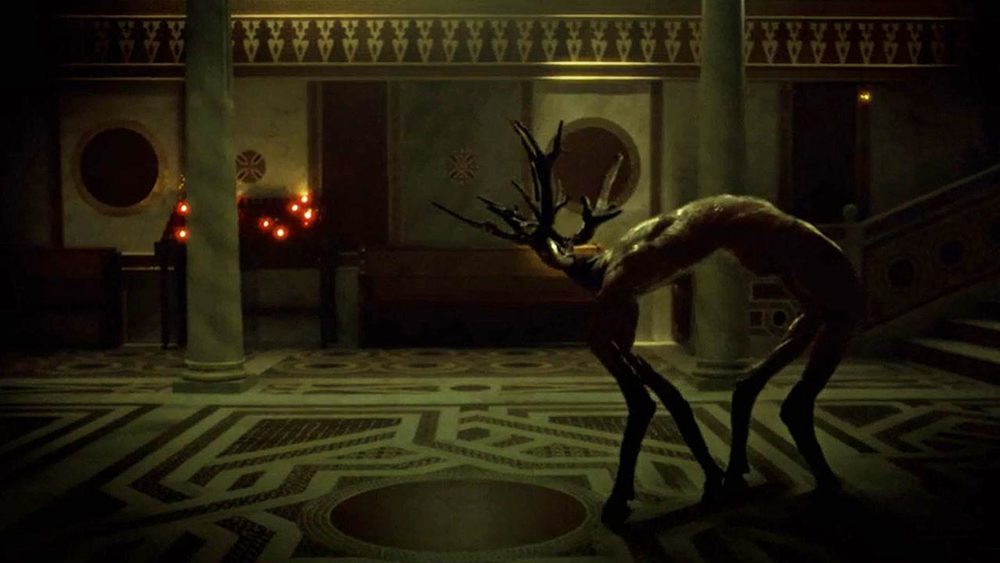 WILL GRAHAM: Hannibal follows several trains of thought at once without distraction from any, and one of the trains is always for his own amusement.

Bedelia did assert this was how they’d catch Hannibal. All of which said, if there’s anything I find sympathetic about Hannibal (and there’s lots obviously) this tendency is probably the biggest. Always live life with one eye firmly on your own amusement.

WILL GRAHAM: What if no one died? What if we all left together? Like we were supposed to. After he served the lamb. Where would we have gone?

ABIGAIL HOBBS: In some other world?

WILL GRAHAM: In some other world.

ABIGAIL HOBBS: He said he made a place for us.

WILL GRAHAM: A place was made for you, Abigail, in this world. The only place I could make for you.

This is an interesting detail of Will, and one that was probably worth further exploration. There’s an implicit contrast between Hannibal’s memory palace and Will’s ability to preserve the dead in this manner, as people he can talk to through his empathy and vision. It’s a good idea, and yet Abigail disappears here never to reappear for Will, and we never see him do this with anyone else. From a writing perspective, this feels like a mistake, albeit one that Fuller could well have intended to correct in a fourth season But on the evidence given, we are forced to assume that Will finds something distasteful about it – as though he is in some fashion violating people to conjure them from the dead like this.

WILL GRAHAM: You shouldn’t be down here alone.

INSPECTOR PAZZI: I’m not alone. I’m with you.

WILL GRAHAM: You don’t know whose side I’m on.

INSPECTOR PAZZI: What are you going to do when you find him? Your il Mostro?

WILL GRAHAM: I’m curious about that myself.

The attempt to concoct a continuing moral ambiguity over where Will’s ultimate loyalties will lie is, if we’re being honest, somewhat unpersuasive. That Will should forever have complex feelings about Hannibal is clearly right, but at this point we know, in a very real sense, that Will is going to try to catch Hannibal (and would even if the fact that the last six episodes of the season will be adapting Red Dragon weren’t already known). That said, Will’s dissociation from the question and treatment of it as an intellectual puzzle is suitably unsettling.

INSPECTOR PAZZI: You and I carry the dead with us, Signor Graham. We both need to unburden.

WILL GRAHAM: Why don’t you carry your dead back to the chapel before you count yourself among them.

A great line, and one that casts a crucial light on this new, post-”Mizumono” Will – one who has seen his ending, lived past it, and now views his life as in a key sense unreal and existing only to resolve the puzzle of its own continuation.

WILL GRAHAM: I forgive you.

And so the action reaches its inevitable conclusion. What is unexpected, however, is that despite having asked for his forgiveness and left his macabre valentine, Hannibal spurns Will’s forgiveness and retreats into the darkness. Although it’s not fair to say that pettiness is out of character for someone who literally murders and eats people for being rude to him, this is a new front in Hannibal’s character – a proof that Will’s claim of having changed Hannibal is true.

Leave a Reply to SabinaCancel reply