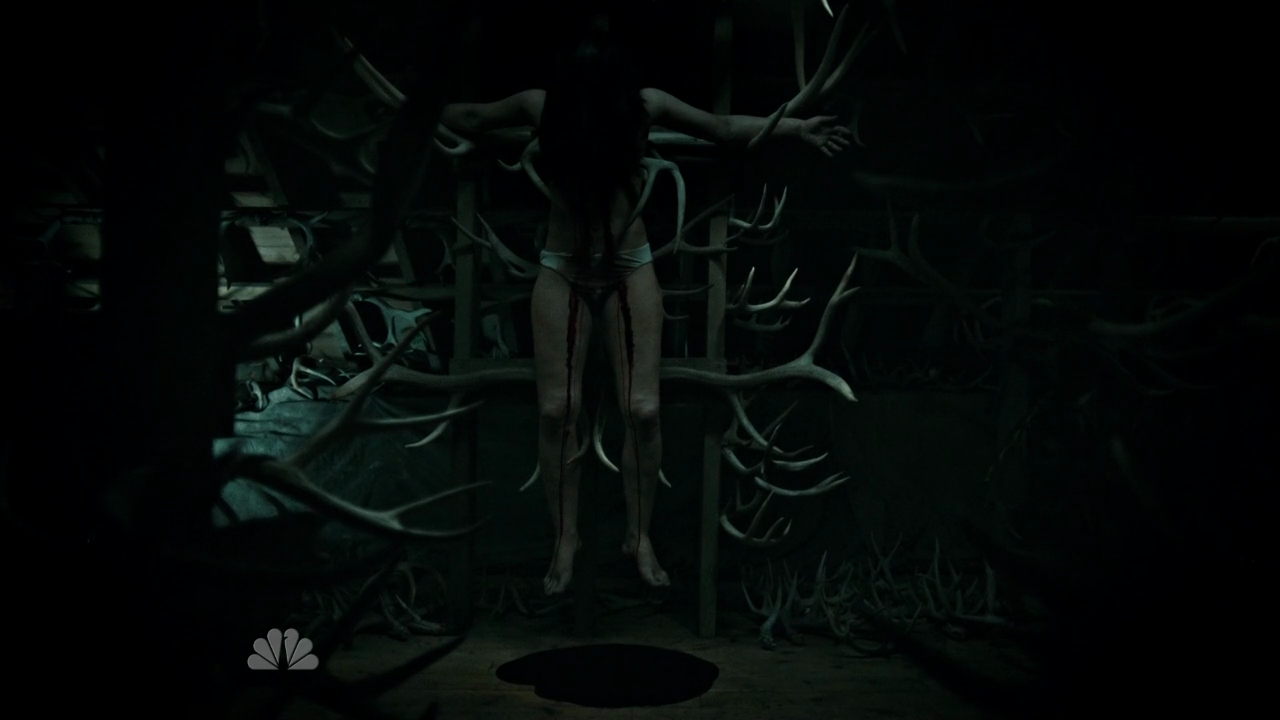 POTAGE: A thick soup, and a rather striking shift in the heartiness of courses that would probably destabilize a meal coming before egg and oyster courses. In this case, it flags the fact that this is an episode concerned entirely with the larger arc as opposed to with a killer-of-the-week.

WILL GRAHAM: I like you as a buffer. I also like the way you rattle Jack. He respects you too much to yell at you no matter how much he wants to.

ALANA BLOOM: And I take advantage of that.

For all the problems with her character (see next note), Alana is quickly established as intelligent and competent. But even here there’s a certain drabness to her effectiveness, which stems at best from authorial fiat and at worst because he’s unwilling to yell at a woman. And given Jack’s relationships with other female characters, at worst is more likely. As for Alanna taking advantage, well, it’s tough to identify when she does this as opposed to either going along with Jack or protesting ineffectually.

ALANA BLOOM: Brought you some clothes. Thought a change would feel good. I guessed your size. Anything you don’t want keep the tags on. I’ll return it. And I brought you some music, too.

ABIGAIL: Probably says something about you.

But what? To some extent this question has no answer. Alanna is after allthe show’s great cipher, a character whose purpose is first to prevent the show from being a complete sausage festival (quite the job), and second to be whatever else the show happens to need. This sort of characterization gestures broadly to the motiveless quirkiness of the Manic Pixie Dream Girl, a role Caroline Dhavernas and Bryan Fuller had already explored and complicated more than a decade earlier in Wonderfalls. Hannibal, however, is not a place where pixies thrive, and these traits never quite add up to anything sensible.

ABIGAIL HOBBS: I don’t know how I’m going to feel about eating her after all this.

The obvious reaction to this is the oft-giffed “cool motive, still murder” bit of Brooklyn Nine-Nine, but that’s manifestly not the ethical system Hannibal means to be working under. This is played as a desperate justification, a point emphasized by the original script, which had Elise Nichols’s body visibly mounted on the wall in this scene, thus moving the revelation that Abigail knew what her father was up to forward by several episodes. But the scene also plays Abigail and her father’s relationship as one with real tenderness, affection, and love. As before, the show is taking the idea that his cannibalism is a means of honoring his victims utterly seriously. Garret Jacob Hobbs isn’t wrong to insist that what he does isn’t “just murder.”

WILL GRAHAM: This copycat is an avid reader of Freddie Lounds and TattleCrime.com. He had intimate knowledge of Garret Jacob Hobbs’ murders. Motives, patterns. Enough to recreate them and arguably elevate them. To art. How intimately did he know Garret Jacob Hobbs? Did he appreciate him from afar, or did he engage him? Did he ingratiate himself into Hobbs’ life? Did Hobbs know his copycat as he knew him?

No, which is the closest Hannibal manages to come to consuming Hobbs. The real pleasure of this scene, however, is Hannibal’s intense appreciation for Will’s unknowing understanding of him, or perhaps more accurately Mads Mikkelsen’s ability to convey this appreciation entirely through gesture and facial expression in a way that gives the scene a dramatic arc. But it is not difficult to see why Hannibal would appreciate Will’s assessment – while Will hedges on the hierarchy of Hobbs and Lecter, the question is whether Hannibal elevated Hobbs’s style, not whether art is a higher style. Certainly it’s not a position that Hobbs would accept – from his perspective, Hannibal’s killings, fueled by sadism instead of love, would be “just murder.” But Will does not seem to consider this position – to him, art is self-evidently a higher form of killing, an assumption so obvious he doesn’t even think to interrogate it.

ABIGAIL: Does that mean I’m sick, too?

FREDDIE LOUNDS: You’ll be fighting that perception. Perception is the most important thing in your life right now.

This sets up Hannibal’s manipulation of Abigail at the episode’s climax (although he isn’t here for this line of dialogue, and thus can only know it if one ascribes supernatural abilities to him), but it’s also far more true than Freddie realizes. It would be more apropos still were she to use the phrase “public imagination,” save for the fact that the perception/imagination that ought concern Lounds is very specific in nature.

JACK CRAWFORD: “It’s not very smart to piss off a guy who thinks about killing people for a living.” Know what else isn’t very smart? You were there with him and you let those words come out of his mouth.

HANNIBAL: I trust Will to speak for himself.

And, more to the point, he wants to encourage Will to identify as a guy who thinks about killing people for a living. But the surface-level content of Hannibal’s statement is interesting as well, highlighting the way in which his treatment of Will does not actually involve any sense of responsibility for Will’s well-being or actions. Which is obvious enough to the audience, but, crucially, really should be obvious to Jack as well.

ABIGAIL: So you pretended to be my dad?

ABIGAIL: What did that feel like? To be him?

WILL GRAHAM: It feels like I’m talking to his shadow suspended on dust.

As with many of the show’s more cryptic lines, this interpolates a bit of Harris’s books, where the phrase describes a mostly unsuccessful effort on Will’s part to conjure an image of his quarry. Here it is impossible to parse, save for its sense of ghosts and distance, establishing that the Chesapeake Gothic dreamscape the show takes place in is not a mere convention of cinematography but a fairly direct representation of Will’s lived experience.

ABIGAIL: Can you catch somebody’s crazy?

This is obviously a commentary on where things are going with Will and Hannibal, although the circumstances that Abigail describes would generally be referred to specifically as folie imposée, in which one person imposes their madness on another. This is certainly what Hannibal has in mind for Will, but in practice they will form the far more fascinating folie simultanée, in which two separate psychoses come to intertwine and mutually influence one another. In effect, then, the difference between artistic influence and artistic collaboration.

HANNIBAL: One cannot be delusional if the belief in question is accepted as ordinary by others in that person’s culture or subculture. Or family.

This quote, which is almost straight from the Diagnostic and Statistical Manual of Mental Disorders, is conspicuously present in the Wikipedia entry on folie a deux, where it’s quoted almost immediately after the imposée vs simultanée distinction. (And yes, this feature of the article predates “Potage.”) Hannibal’s attempt to dissuade Abigail of the idea that her murder (or, if one wants to take an expansive view of what Hannibal is and is not aware of, Will of his, since he tacitly responds to Will’s flashback to Hobbs) is the product of madness is simply motivated: Hannibal does not consider his to be. Or more accurately, he does not consider the categorization relevant to him. And by dint of his newfound familial bond with Will and Abigail, it does not apply to them either.

MARISSA: Stop being such a bitch.

As justifications for Hannibal’s murders go, this may be the most specious. He is admittedly looking for an excuse at this point, given that a second copycat murder will increase pressure on both of his current projects, but all the same, it’s unusual for Hannibal to kill someone who isn’t actually rude to him or anyone he cares about. 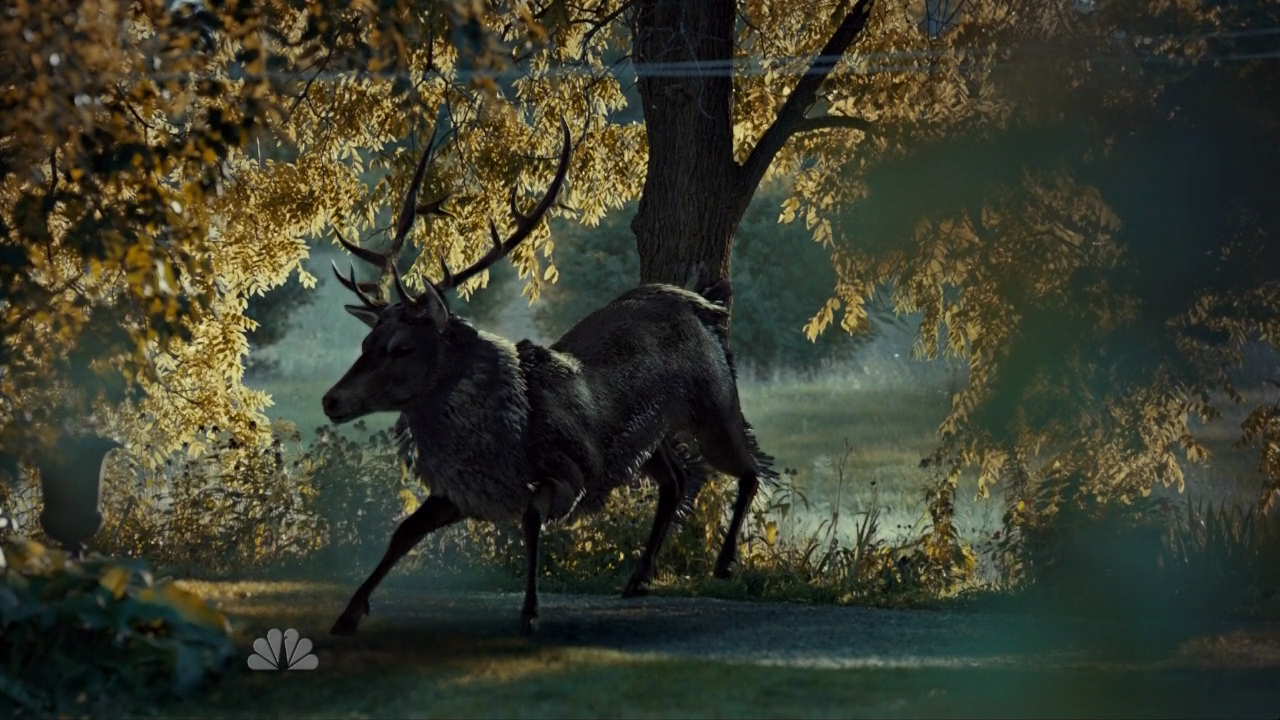 I could have talked about this in either of the last two entries, but I was waiting for one where I was running a bit short on points for commentary, so here we are. The Stag is the core of Will’s complex dream-mythology of Hannibal, a set of images and hallucinations that will ripen and evolve deliciously over the course of the series. Its origin, obviously, is in Cassie Boyle’s murder, which eventually turns out to be a little odd given that Will has been involved in hunting the Chesapeake Ripper as well. But of course, Cassie Boyle’s murder was for him, “gift-wrapped” as he put it to Hannibal, and so it’s that, not the Ripper, that begins to create an image of Hannibal inside of his head.

Eventually this iconography will evolve, but we’ll get there when it happens.

HANNIBAL: Was he? This isn’t self-defense, Abigail. You butchered him.

HANNIBAL: They will see what you did and they will see you as an accessory to the crimes of your father.

HANNIBAL: I can help you, if you ask me to.

The Luciferian temptation involved here, complete with the heavily performative move of making Abigail ask for the help that he’s already offered, is a routine move for Hannibal, although it lacks what will become the defining line. On one level this is straightforward manipulation: Hannibal seeks to create a sense of debt and obligation in someone by dint of injecting himself into a situation where they kill someone. (Often a situation he’s helped engineer, though his involvement in the Nicholas Boyle situation is negligible.) The hidden factor in the resulting devil’s bargain is that Hannibal’s targets generally wrongly assume Hannibal would be as reluctant to kill them as they would be to kill him. Note also, however, the superhuman perception and creation of a plan involved in Hannibal’s knocking Alanna out. As with everything, it doesn’t strictly require that we read Hannibal as possessing supernatural abilities, but it’s a lot easier than trying to work out what Hannibal’s actual moment-to-moment thought process would be here.

ABIGAIL: They think who called the house was a serial killer. Just like my dad.

HANNIBAL: I’m nothing like your father. I made a mistake. Something easily misconstrued. Not unlike yourself.

Hannibal is pushed to an outright lie here, although he mixes it with a deeper truth in his disavowal of the similarity between himself and Abigail’s father. We have already unpacked the substance of this distinction. Hobbs’s killings are based out of mere pathology, some unresolvable issue in his emotional relationship with Abigail that required cannibalistic murder to work through. Hannibal, on the other hand, has contempt for his victims, which allows him the distance needed to create art. The vehemence with which he rejects the comparison, however, reflects his underlying anxiety about the accusation, an anxiety also reflected in his need to replace Hobbs for Abigail in lieu of actually consuming him.