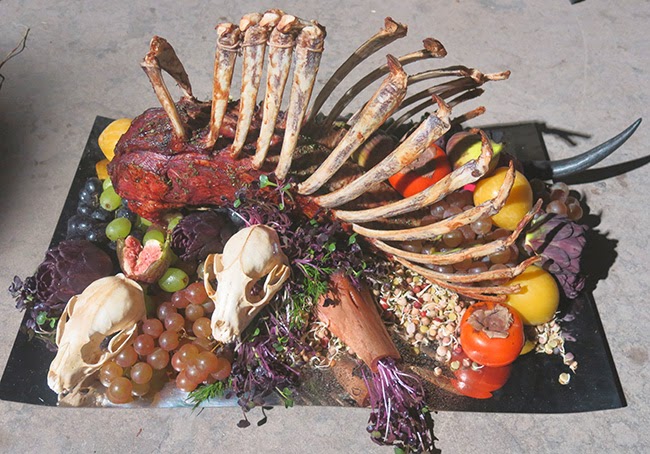 APERITIVO: The Italian equivalent of the apéritif, i.e. a before dinner drink. Eagle-eyed readers may note that this is the fourth episode of the season. The joke (and it’s a solid one) is that we’ve finally flashed back to answering what actually happened in the wake of “Mizumono,” and so this is the chronological first episode of the season. Hannibal – for all your highbrow narrative/Italian menu structure gags.

DR. CHILTON: Now that I’ve got the routine down, no time at all.

MASON VERGER: Tell you what. You show me yours and I’ll show you mine.

There is something trolling about revealing Chilton’s fate from “Yakimono” before getting to Alana. Unfortunately, taken in the context of the general problems Alana has as a character, it feels vaguely mean-spirited, with Alanna being treated as an object of peril in a way that Will, Jack, and Abigail were not. Still, reintroducing Chilton opposite Mason Verger and having them bond over facial disfigurement is a nice touch. 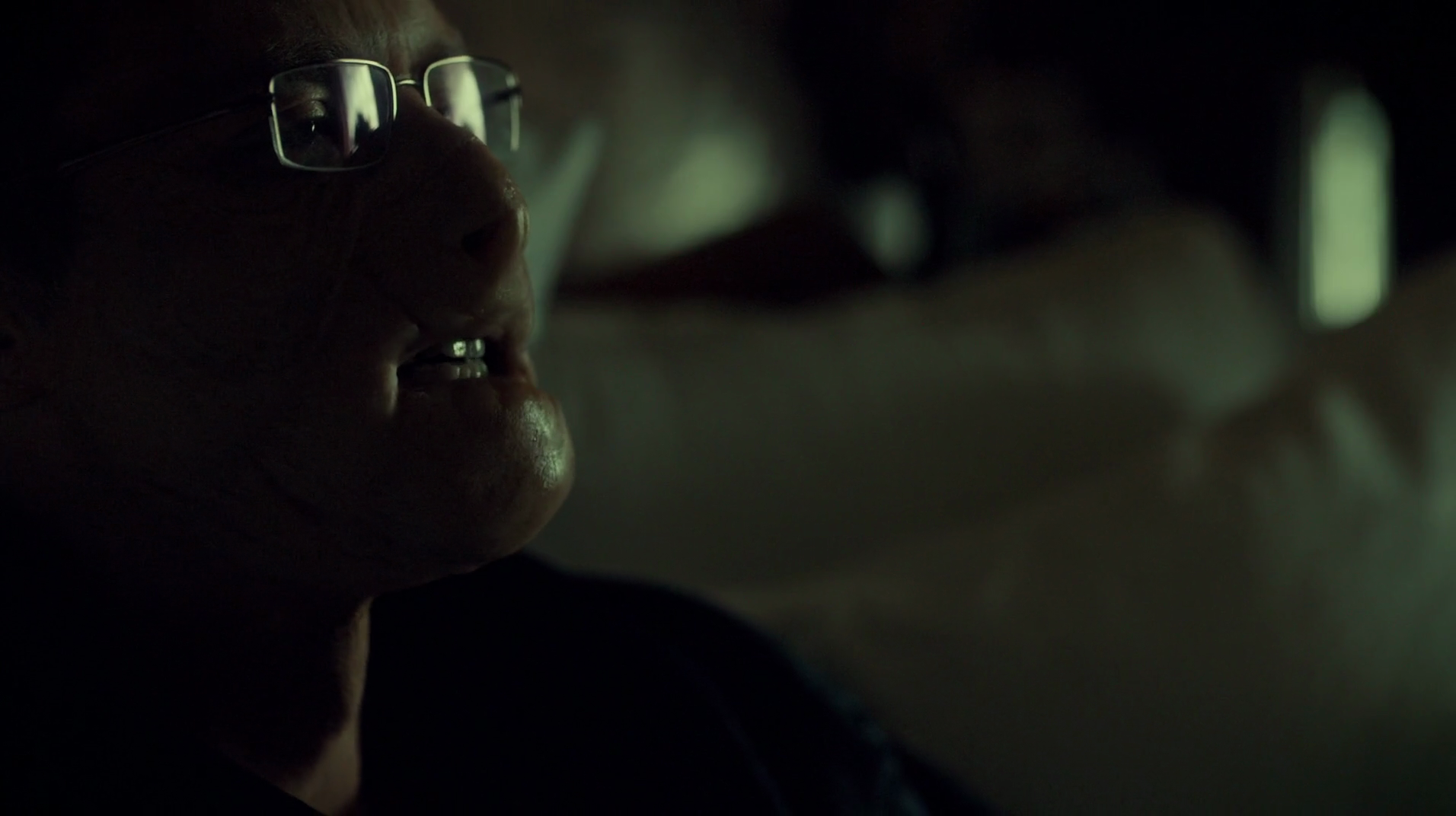 Mason Verger, recast as Joe Anderson. The fact that his makeup is dramatically different to begin with does a decent job of masking the recasting, although Anderson is inclined to play the part with more subdued menace than Michael Pitt’s more over the top perverse relish. 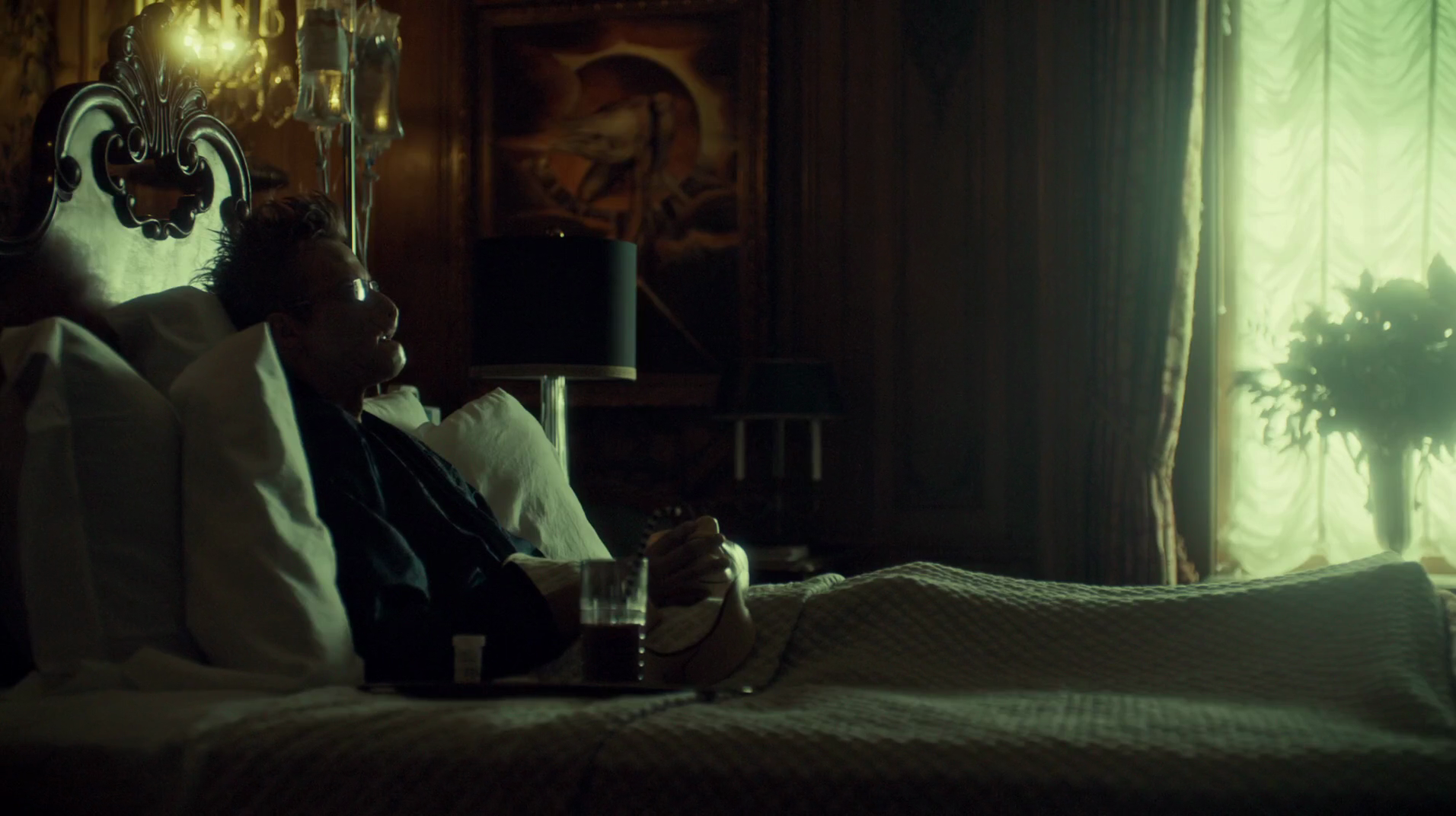 The first appearance of William Blake in Hannibal. He’ll come up again soon. The painting is the Ancient of Days, and is the frontispiece to Europe a Prophecy. The figure within is Urizen, Blake’s mad demiurge of tyrannical reason. This appears to be a bespoke version of the image held at the Whitworth Art Museum in Manchester, which they suggest dates from the end of Blake’s life. (Blake did late-career versions of most of his major works with particularly ornate and detailed coloring, although the Whitworth’s version is frankly inferior to the one in Copy K of Europe a Prophecy.)

The detail of Mason owning the artwork is faithful to Hannibal, where it’s described as a “a passable print” that is nevertheless draped in black to mourn the passing of Mason’s father. Harris (or perhaps simply Starling within the book) mis-identifies it as “God measuring with his calipers,” but who’s counting? If one assumes a thorough bit of reasoning for this detail, it would point towards Verger’s role as a deranged puppetmaster attempting to control events, though to be perfectly honest it’s a pretty weird detail.

DR. CHILTON: How do you relieve the agony of waiting for Dr. Lecter’s capture? What do you fantasize about? I wonder what would happen if Hannibal Lecter was in your hands.

MASON VERGER: I worry we’re heading into territory not secured by your fee. I think I need to look elsewhere for someone to tend to my emotional well-being. Good-bye, Dr. Chilton.

For all that the script describes Chilton as “a little steely. As if remade with stronger stuff,” he remains unique in his capacity to be a complete tool, managing to blow helping Mason catch Hannibal by being too coy and manipulative. 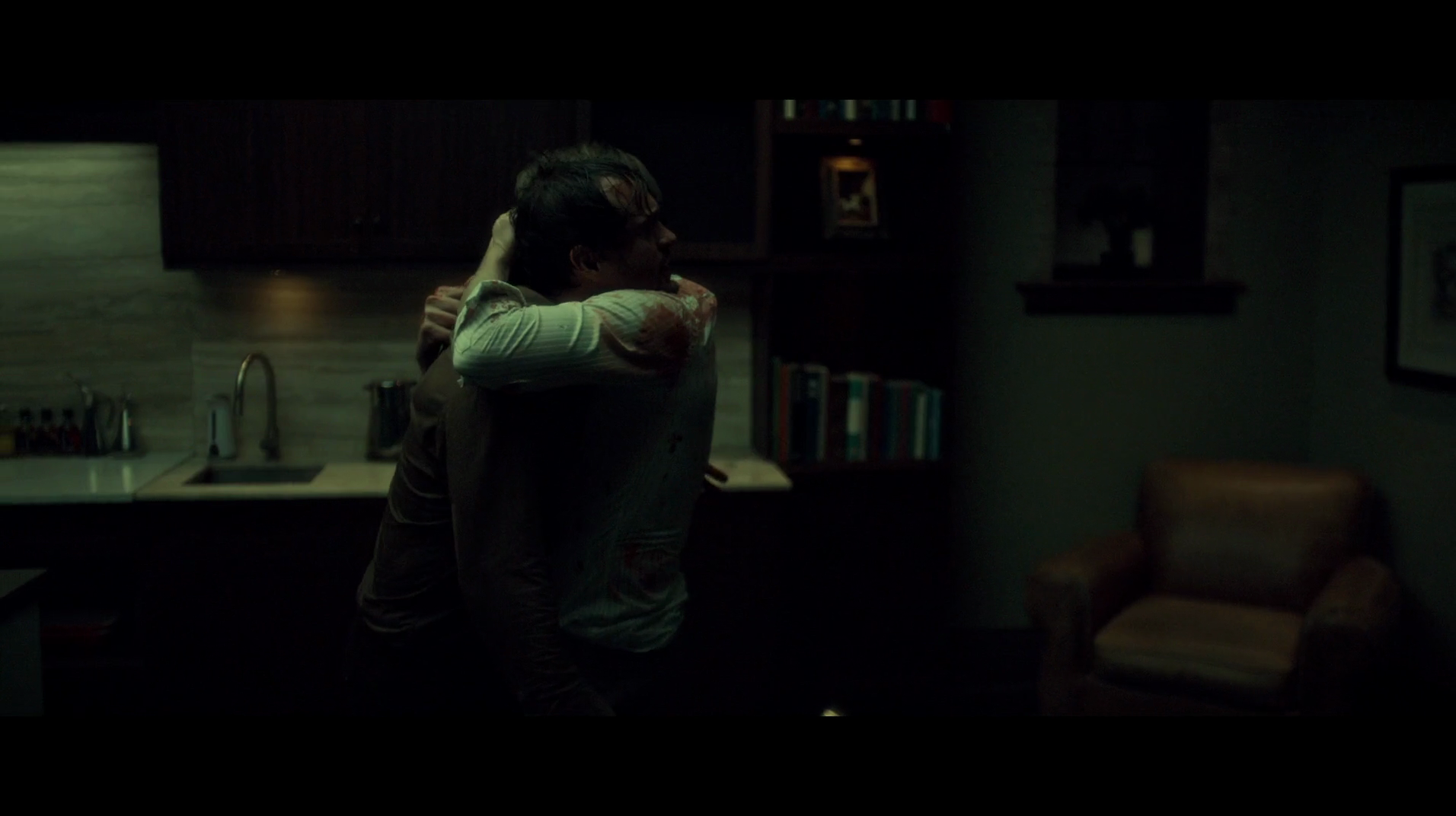 This is the second re-use of this scene in Season Three, the first being the impressively long recycling of the entire scene at the top of “Primavera.” One suspects Fuller and company are reacting to their declining budget with a somewhat liberal use of material they’ve already shot.

DR. CHILTON: Couple of suckers we’ve been. He set us up and knocked us down. What bothers me most is, I think it was easy for him. Shooting monkeys in a barrel. You had encephalitis. I don’t know what my excuse was.

WILL GRAHAM: Imitation allows us to better understand the behavior of others.

Unlike Hannibal, Chilton can be reduced to a set of influences. Will uncharacteristically attempts to cheer him up after that putdown by regurgitating Aristotle at him.

DR. CHILTON: The optimist believes we live in the best of all possible worlds; the pessimist fears this is true. This is your best possible world, Will. Not getting a better one.

Chilton’s conversation with Will mirrors the imaginary one he had with Abigail in “Primavera,” to the point of starting the same way. Here, at the end, it comes to the topic of the many worlds hypothesis, except instead of offering the vaguely hopeful note that Will gives to Abigail, Chilton focuses on the blunt reality that we only actually get one of them.

JACK CRAWFORD: We assign a moment to decision, to dignify the timely result of rational and conscious thought.

WILL GRAHAM: Not all of our choices are consciously calculated.

JACK CRAWFORD: Our decisions are.

WILL GRAHAM: Decisions are made of kneaded feelings. They are more often a lump than a sum, Jack.

JACK CRAWFORD: Do you remember the moment you decided to call Hannibal?

JACK CRAWFORD: You told him we knew.

WILL GRAHAM: I told him to leave. I wanted him to run.

WILL GRAHAM: Because he was my friend. Because I wanted to run away with him.

An interesting revelation that is not entirely set up or justified by “Mizumono,” where the “whose side is Will actually on” tension rapidly dissipates. Indeed, this episode even reruns the section that most undermines the claim, as Will expresses surprise that Hannibal didn’t leave without him. But for all that the revelation is on the contrived side, the actual scene here is tremendously moving. The weight comes mostly from Lawrence Fishburne, who sells every bit of Jack’s wounded love for his friend.

ALANA BLOOM: They told me a lot of marrow got into my blood. And that I should expect to find myself thinking differently.

Although bone marrow transplants can result in small cognitive differences in taste, the implication here – that Alana’s injury provides a medical reason for her newfound ruthlessness (and lesbianism) is, to say the least, strained.

DR. CHILTON: Will Graham could use a breakthrough.

ALANA BLOOM: Being broken was his breakthrough.

DR. CHILTON: Being broken was yours. Will hasn’t had his breakthrough yet. He’s saving that for Dr. Lecter.

ALANA BLOOM: Would be the best thing for his therapy, really.

Alana’s assessment here mirrors Hannibal’s comment to Margot about it being more therapeutic if she kills Mason – a parallelism that gets at the nature of her bone marrow-fueled transformation.

ALANA BLOOM: A witchy beauty about this place.

MARGOT VERGER: Yes, there is.

Really I just wanted to isolate this string of dialogue such that it became a single entendre.

JACK CRAWFORD: Behavioral Sciences doesn’t have the resources. Homeland Security is the priority. Terrorists are more frightening than psychopaths.

Jack describes a real shift in the psychogeography of American phobias, and one that essentially enables Hannibal. There are many differences between it and Silence of the Lambs, but one of them is that the former came out in the middle of the five year stretch in which John Wayne Gacy, Jeffrey Dahmer, and Ted Bundy all died, when the sexual sadist serial killer was an active part of America’s psychic landscape. The over the top gothic camp of Hannibal wouldn’t have landed then. I mean, Hopkins’ version of Hannibal was campy as fuck, but there was an underlying sincerity to the movie – a sense that it thought it was depicting real horrors. But by 2013 the ground had shifted, and the hyperstylized and phantasmagoric approach we all know and love had become culturally possible.

DR. CHILTON: You’re alive because you didn’t pull that glass out of your neck. Will Graham is alive because Hannibal Lecter likes him that way.

JACK CRAWFORD: Maybe it’s one of those friendships that ends after the disemboweling.

DR. CHILTON: I would argue, with these two, that’s tantamount to flirtation.

Both Jack and Chilton are, in their own ways, wrong here. Jack is the most straightforwardly wrong – this is not a friendship that ends after the disemboweling. But Chilton unsurprisingly misreads the dynamic between Will and Hannibal, mistaking their moments of betrayal as intimacy, an error roughly analogous to mistaking grit for a pearl. (More fundamentally, both of them mistake the physical injury to Will for the core betrayal, as opposed to the murder of Abigail.) 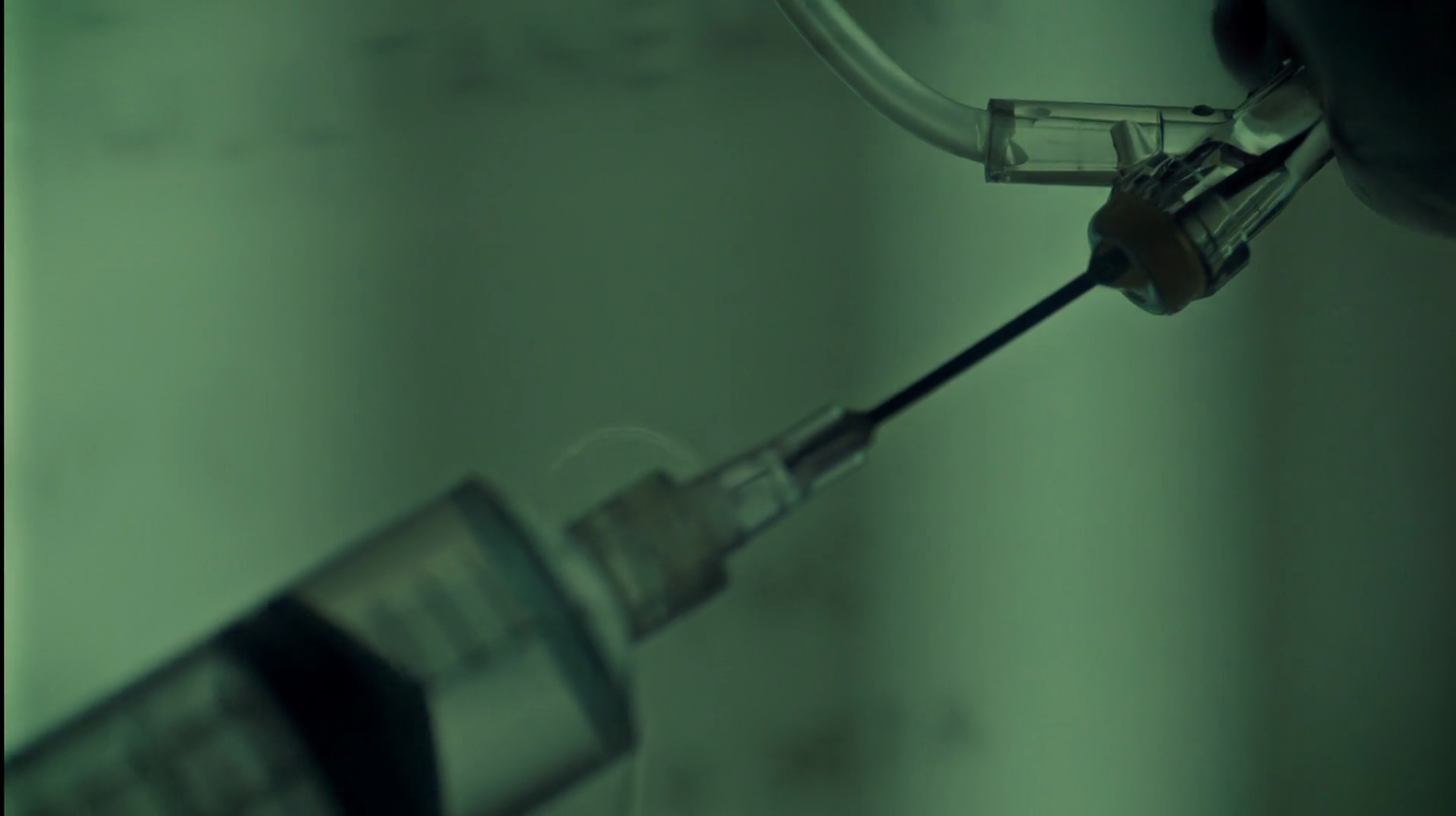 There is an extent to which “Aperitivo” falters as an episode by dint of having left itself too many things to do. Reintroducing Mason, Alana, and Chilton is already a big ask, and we’ve noted the degree to which the approach objectifies Alana within the narrative. But late in the episode it revamps itself to be about providing a final resolution to the Jack/Bella plot. For the second time in the episode, Lawrence Fishburne salvages an undercooked scene, giving Bella’s death a formidable stillness that make it stand out within the cluttered episode. It ends up not so much being the most memorable thing about the episode as an astonishingly memorable thing that seems to float outside the episode, a crucial moment of the show that feels unconnected to its serialization.

The breathtaking sadism of Hannibal’s letter is perhaps the show’s clearest illustration of Bedelia’s forthcoming point about cruelty and empathy. What is crucial to understand about it is that it is entirely sincere – the script even calls for Hannibal to weep over the letter. Hannibal’s respect for Bella and grief at her death is real. He reaches out to Jack in actual friendship. And he knows as he does it precisely how much hurt it will cause.

ALANA BLOOM: That’s how you’ll find him. The wine… the truffles. Taste in all things will be a constant between Dr. Lecter’s lives. His name will change, but his taste will not. And he is not a man who denies himself.

ALANA BLOOM: He’s already gone, Jack. Will knows what he has to do. Do you?

Alanna’s question is entirely fair, as is the question “does she?” The episode has stressed the degree to which he is sidelined after his injury, and it’s not entirely clear what role he’s supposed to have in the grand design that’s unfolding. It’s notable that he is not a presence in Hannibal the novel; he’s in failing health, and passes away by the end of the book. Obviously neither is Will, but where Will slots reasonably straightforwardly into Clarice’s role, Jack is an essentially new presence in the adaptation, and thus the question of his role is one of real suspense. 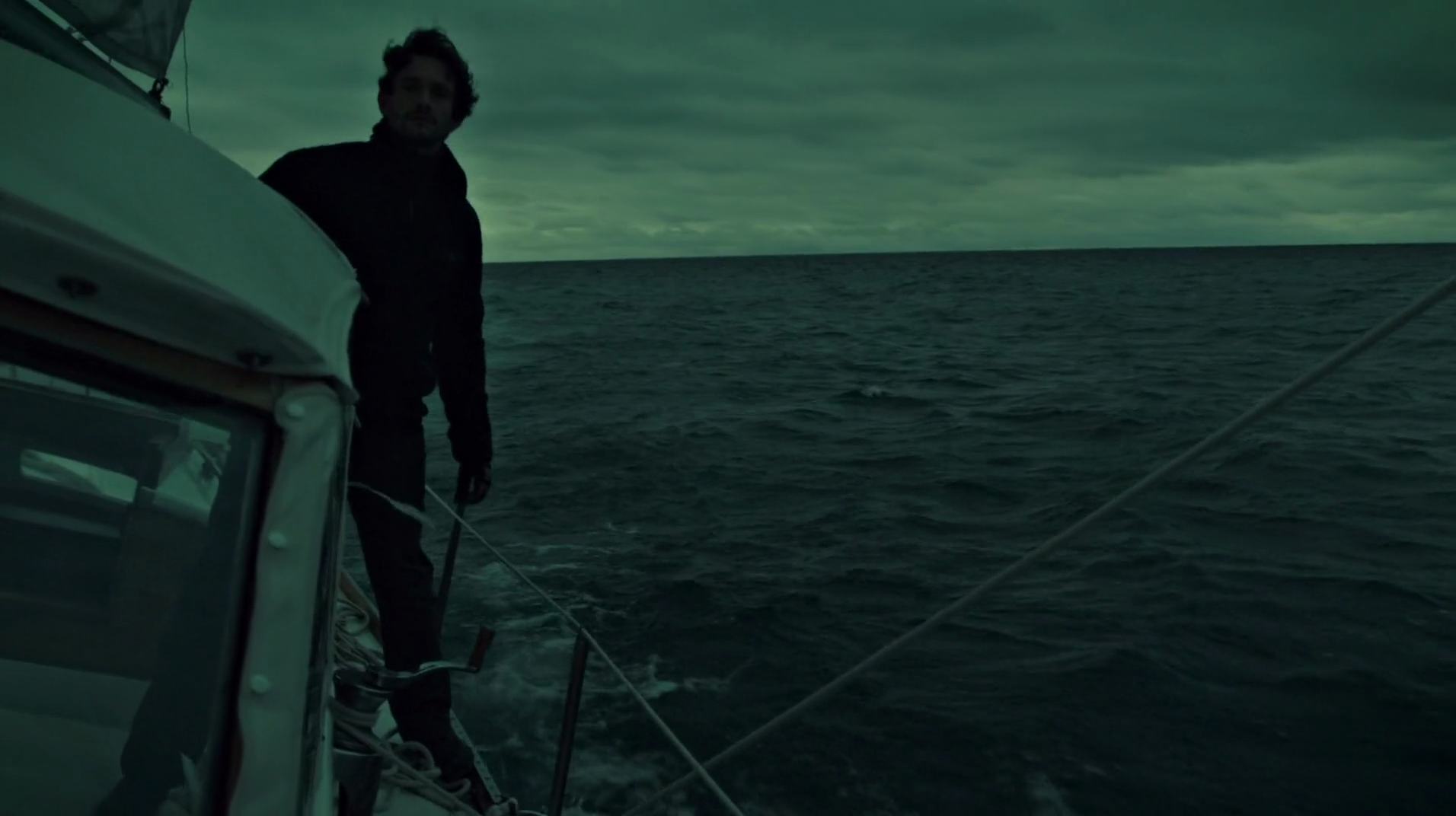 I have questions. Is this Will’s boat? We’ve never seen Will have a boat before. Wolf Trap is not coastal, so it seems unlikely that he’d have one ready to go at any moment. So Will appears to be stealing a small boat and sailing it across the Atlantic to catch Hannibal. This is a very bad plan even by the standards of Will Graham’s plans to catch Hannibal, but it is a very good final image for an episode, which is probably the more important thing. Hannibal does not have narratological concerns, only aesthetic ones.