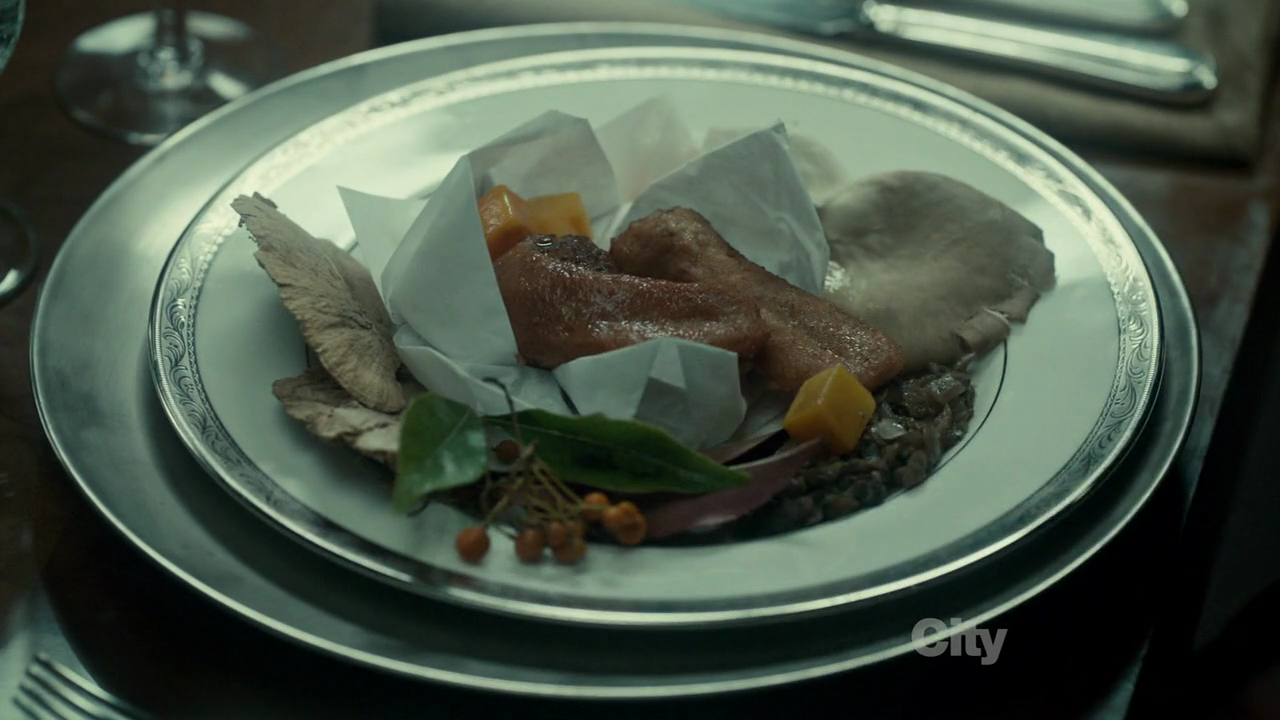 ENTRÉE: With the episode titles in French, this does not carry the English meaning of “main course” per se, but rather refers to a transitional course between fish and meat dishes. In truth the meaning is double, flagging this episode’s status as a transitional one in the season and its status as the first one since “Aperitif” to be focused entirely on the arc plot. 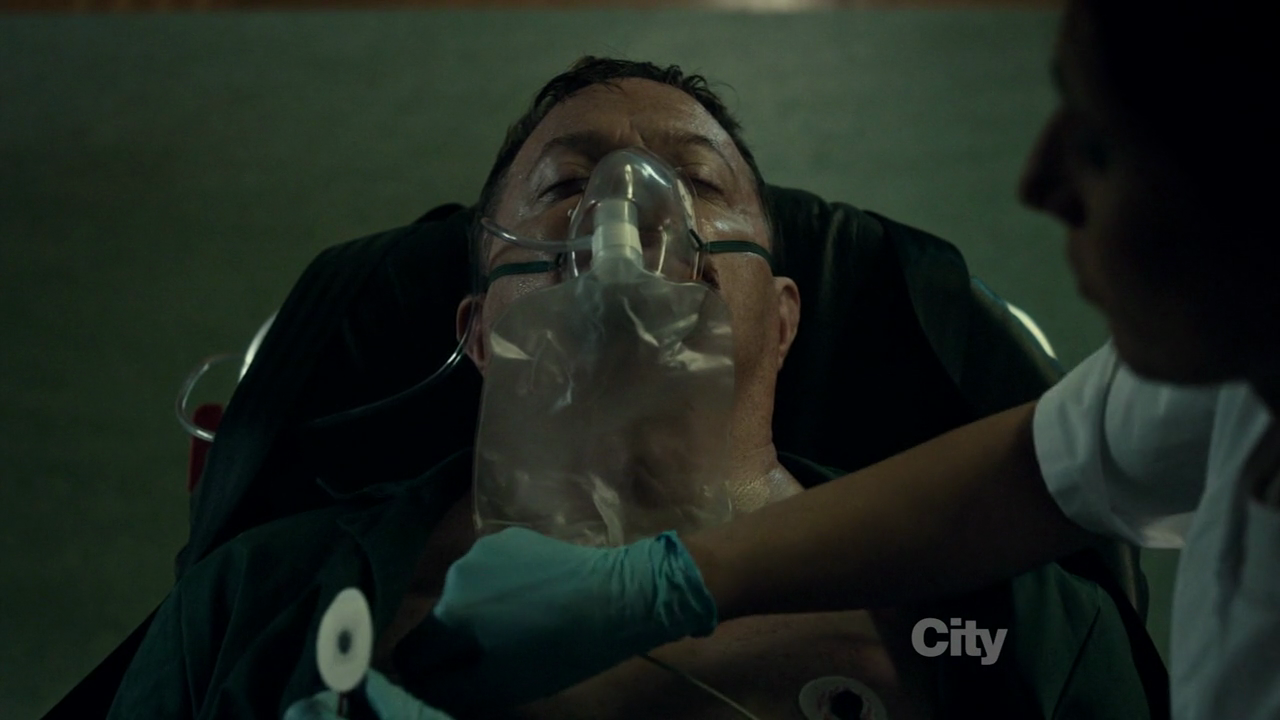 “Entrée” is long on Silence of the Lambs parallels, although unlike with elements drawn from Red Dragon, the show does not actually have the rights to the book and so can’t take and repurpose dialogue per se. Instead it tinkers with the iconography (to the point of exactly matching the uniform designs of the film), doing things akin to how Budish interpolated Francis Dolarhyde. To wit, Gideon’s ploy here closely mirrors Hannibal’s escape at the end of Silence of the Lambs.

WILL GRAHAM: I’m always a little nervous going into one of these places. Afraid they’ll never let me out again.

WILL GRAHAM: Not today.

Gee, I wonder what the end of season twist is going to be?

DR. CHILTON: Ah, yes. That thing you do. You are quite the topic of conversation in psychiatric circles.

WILL GRAHAM: Am I?

DR. CHILTON: A unique cocktail of personality disorders and neuroses that makes you a highly skilled profiler.

DR. CHILTON: Perhaps he should be.

The unsubtlety of the foreshadowing is cleverly obscured by the unsubtle reiteration of the point that Will is himself “crazy” (inasmuch as the show takes that word seriously) as Chilton eyes him hungrily as a potential patient. This is, of course, one of the characteristic techniques of the show: achieving subtlety through overlapping complete lacks of subtlety.

It’s also worth noting, however, how decisively quickly the fact that Chilton is a complete shitheel is established. Much of this is down to the clever timing here – Chilton is, if not right about Will, at least not wrong about him, but this comes so early in Will’s mental deterioration and is presented with such guileless opportunism that the thing it most directly sets up is not “Will is unstable” but rather “Chilton is the worst.” 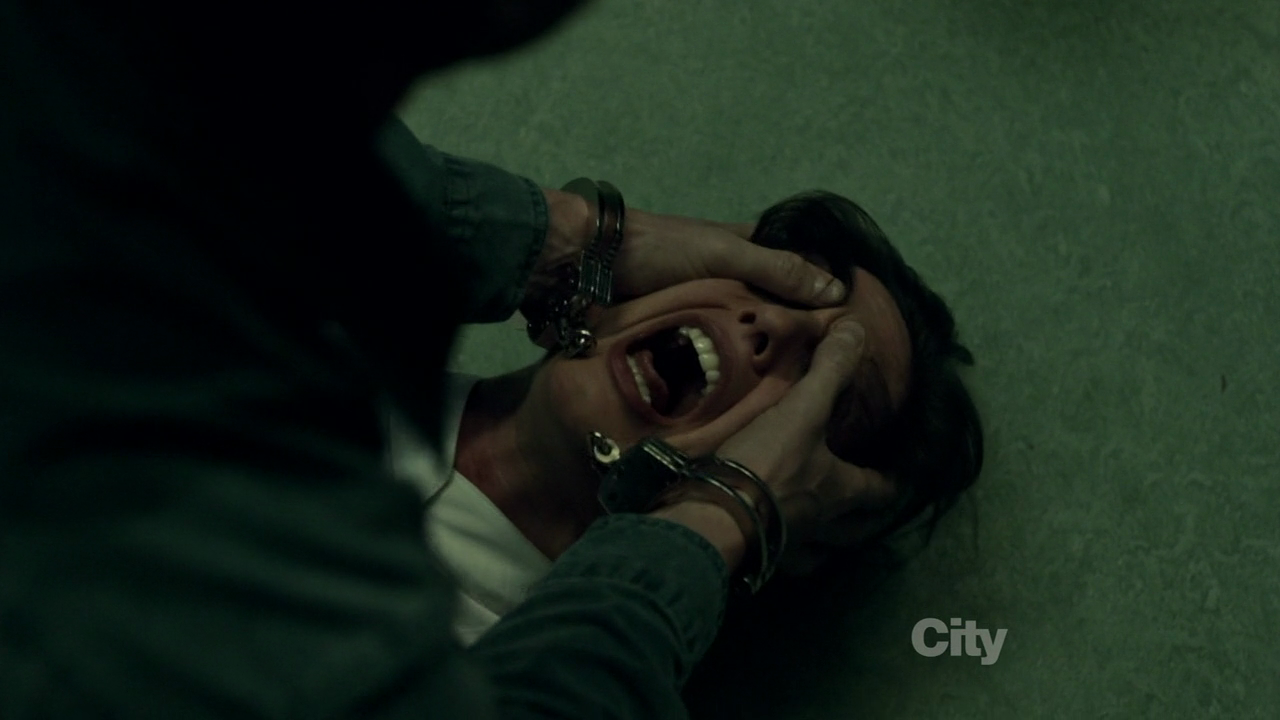 JACK CRAWFORD: Sorry to pull you out of class. There’s nothing wrong. I don’t want to make you nervous.

JACK CRAWFORD: Your instructors tell me you’re in the top ten percent.

Without actually using any of the dialogue, this scene reiterates the basic beats of the first meeting between Jack Crawford and Clarice Starling, setting Miriam up as a mirror of the character. Indeed, Miriam’s function in this episode includes a lot of playing out the roles of other Harris characters. 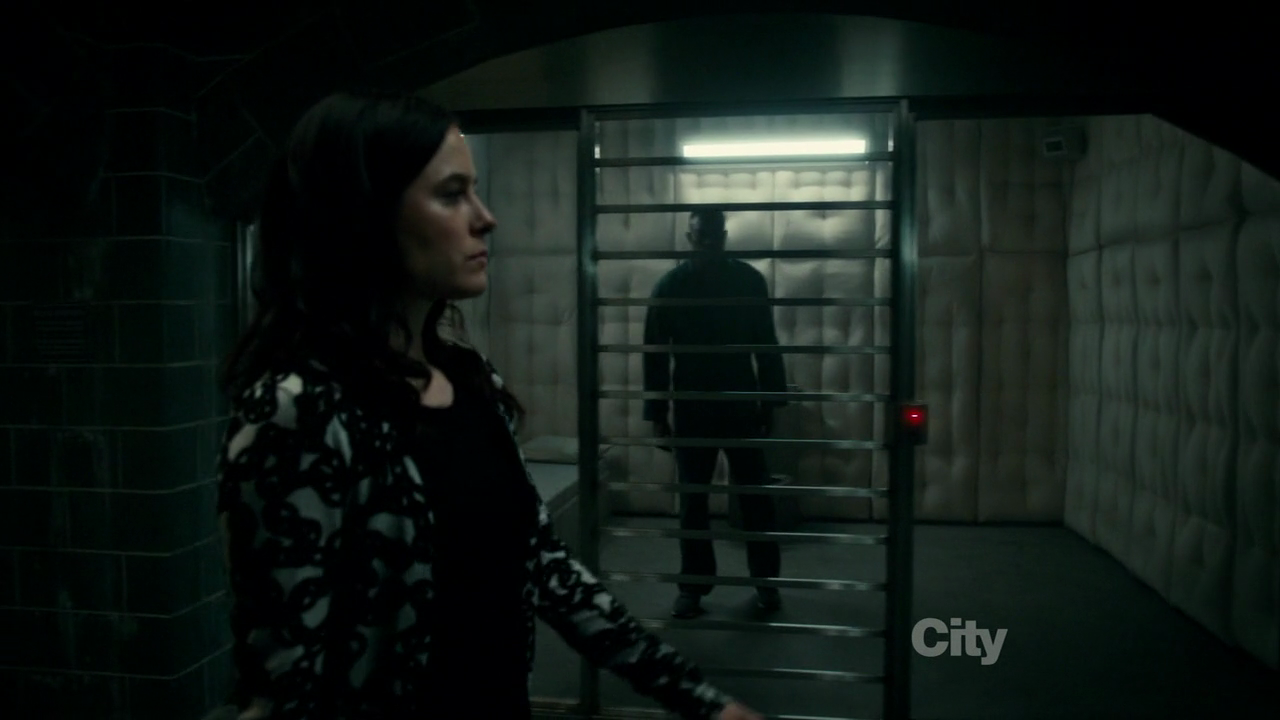 This episode finds two occasions recreate Clarice Starling’s iconic walk down the corridor of the Baltimore State Hospital for the Criminally Insane. Unsurprisingly, it is Alanna who gets the “classic” version that holds slavishly to the blocking of Silence of the Lambs, since her character is too hazily defined to use for some other narrative purpose here. In keeping with the show’s de-emphasis of sexual violence, nobody tells her that they can smell her cunt.

BRIAN ZELLER: I’ll say it once more, just to say it. It was 2:47 in the morning. If you get roused from deep sleep, you’re going to be disoriented. May not even know you’re asleep.

Compare to Will’s “I’m not even sure if I’m awake now” last episode. In one sense, at least, Jack’s claim is well-founded: he is perhaps the one character who never seems to slip into a fugue state. In another sense, however, nobody in Hannibal can really be said to be awake with any honesty. 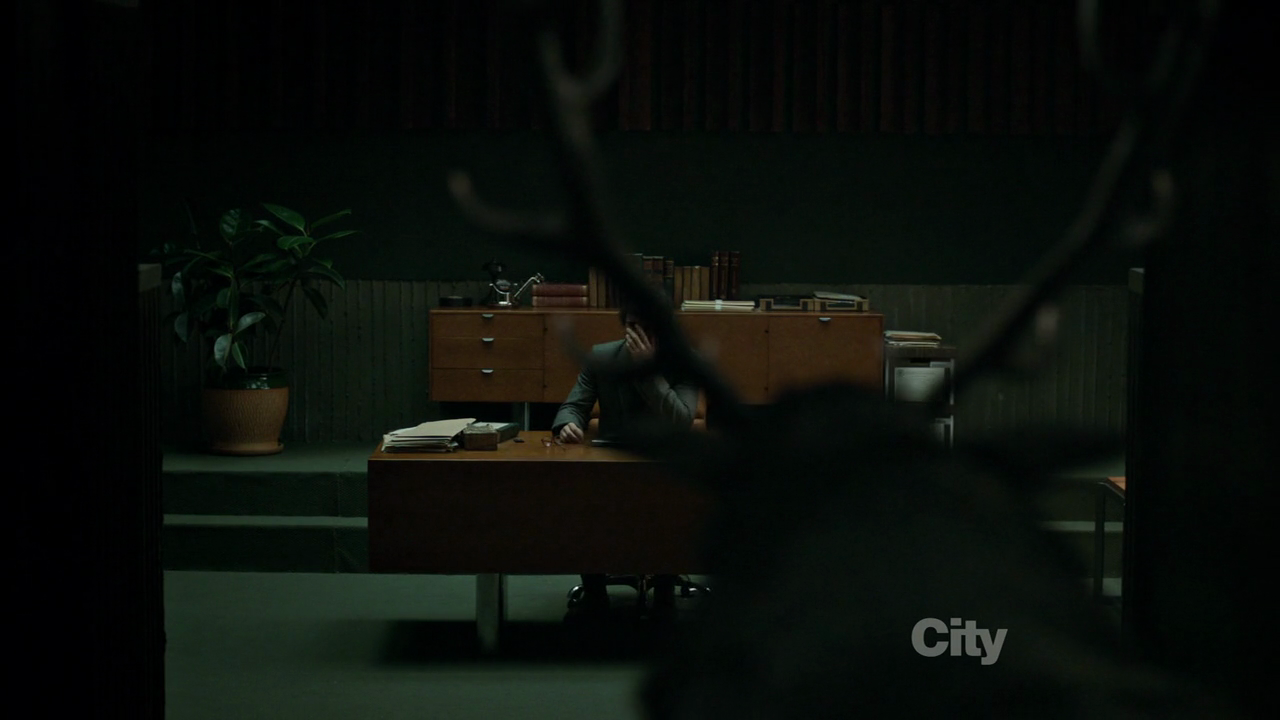 Jack’s line about knowing when he’s awake cuts straight to an exhausted Will hallucinating, hammering home the contrast mentioned above. This scene then cuts to Will waking up in his office as Jack and Alanna talk to him about a matter entirely unrelated to the scene that transitioned into the dream – a progression that perfectly encapsulates the narrative logic of the show.

JACK CRAWFORD: Do you know which professions psychopaths disproportionately gravitate to?

WILL GRAHAM: Then you know what number six is.

FREDDIE LOUNDS: Here we are. A bunch of psychopaths helping each other out.

Freddie offers one of the show’s funniest self-summaries here. The clergy are actually number eight on the list, however, with number three being media personalities – an alteration presumably made so as to remove confusion over where Freddie fits on the list. Ironically, third from the bottom on the list is “therapist,” while seventh and eighth are “teacher” and “creative artist.”

Ninth from the top, meanwhile, is chef. 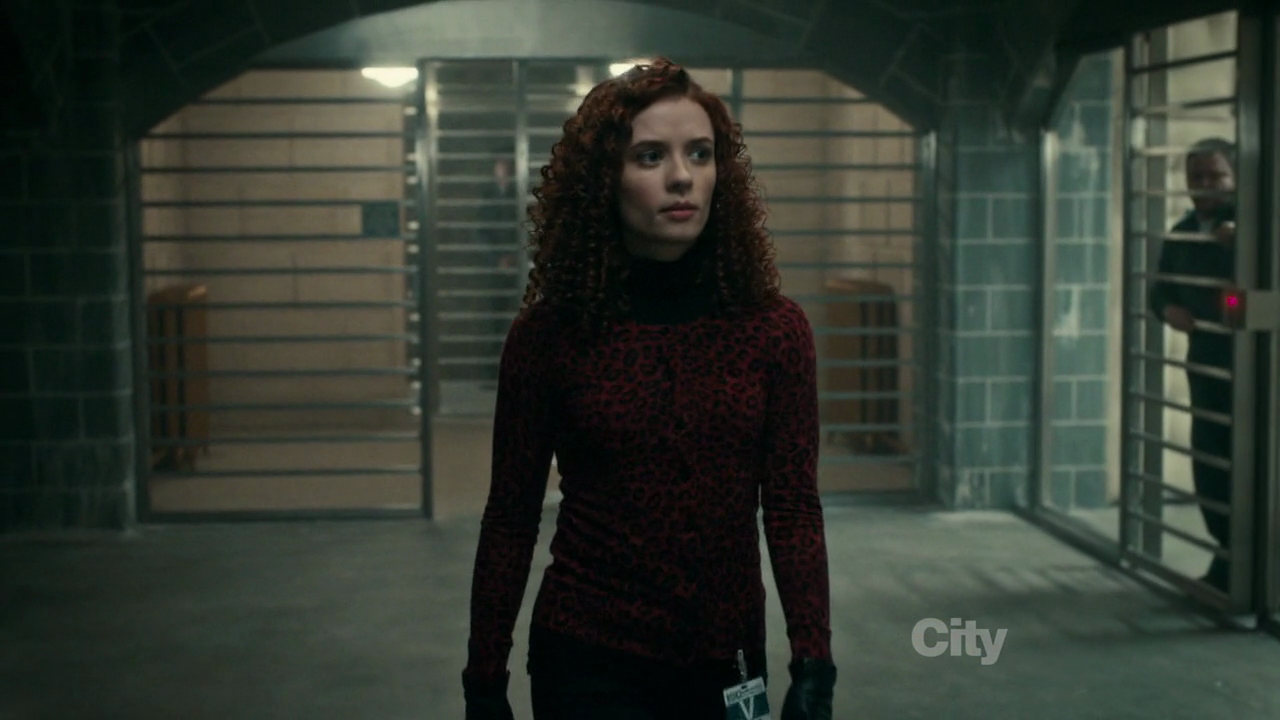 In contrast to Alanna’s iteration of the Clarice Walk, Freddie Lounds gets to treat the hallway as a catwalk, striding down to ominous yet enthusiastic drums (as opposed to Alanna, who just gets a dissonant drone of bass). The corridor is not actually shorter when Freddie does the Clarice walk, but the camera positioning, brighter lighting, and editing makes it seem as though it is, and honestly, within the logic of Hannibal, there’s no particular reason why it shouldn’t be shorter when Freddie is sashaying down it. 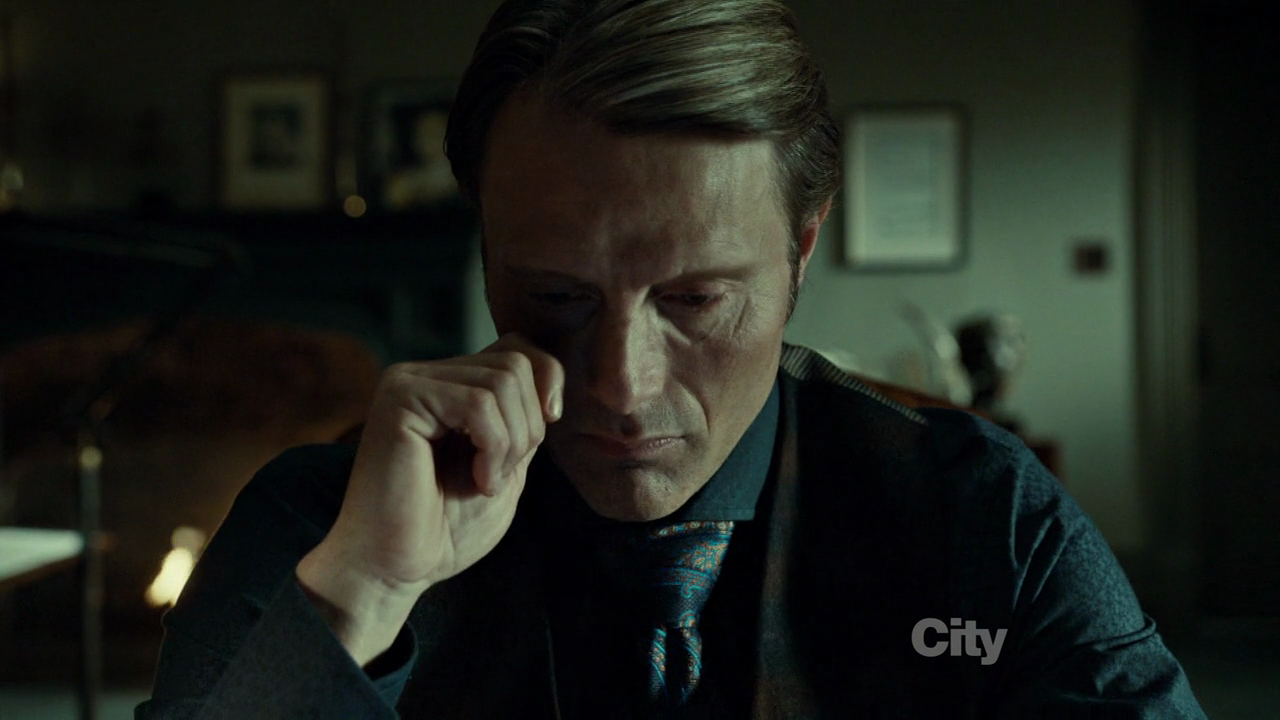 As scripted, Hannibal’s reaction to Freddie Lounds’s article is “a disapproving tsk-tsk-tsk sound.” Mikkelsen opts to play it as what is best described in terms of seething anger at a bad review – a straightforwardly more interesting decision. What pushes Hannibal into a killing spree here is not, as tsk-tsking would suggest, the rudeness of Gideon’s claim but rather a fury at his art being misunderstood, as evidenced by the fact that his immediate reaction is not to take another sounder, but rather to engage in the elaborate game with Miriam.

HANNIBAL: I love Norton grapes. Same color inside as outside. Peel it and the flesh is also purple, not like other grapes where flesh is white and color comes from the skin.

DR. CHILTON: A grape with nothing to hide.

Hannibal has made a non-trivial culinary sacrifice in the name of making his theatrical point here, given that Norton grapes are a mediocre wine grape from Missouri as opposed to a natural choice for a dessert. The situation can presumably be salvaged with culinary skill, but the suggestion that Hannibal “loves” the grape is strained. Still, it’s hard not to appreciate this sort of over the top effort to say “let’s be honest with each other Frederick.”

HANNIBAL: Were I in your position, I would have attempted psychic driving. Based on your familiarity with the subject, perhaps you already have. I promise I am much more forgiving of the unorthodox than Dr. Bloom.

It’s a little unclear what’s intended here. Psychic driving is an MKUltra technique with the explicit goal of reprogramming someone’s personality – it involves administering paralytic drugs and playing repetitive mantras to the patient on end, and was a precursor to MKUltra’s later experiments with LSD. In this regard it fits with Hannibal’s psychiatric practice, and is indeed along the lines of what he’ll eventually do to Will Graham. It’s also broadly in line with the sorts of extreme practices that Chilton is eventually shown to engage in. But given that the issue was raised by Alanna in terms of “inadvertent” suggestion to Gideon, it’s difficult to imagine how this meaning of psychic driving could be intended. The easiest explanation is that Chilton is such an idiot that when confronted with the suggestion of inadvertent suggestion he blabbed out the ridiculously extreme and unethical psychological practice he actually used, but it’s still hard to imagine why he’d use a technique that’s based around programming the subject as opposed to around discovering what’s already in his head. The explanation Hannibal offers here – the possibility of undoing repressed memories – is so weirdly strained that it becomes difficult to reconstruct Chilton’s thought process. Ultimately, this is something of a blank slate: it’s never clear what made Chilton begin to suspect Gideon might be the Chesapeake Ripper save for Chilton’s own hubristic desire to uncover him. 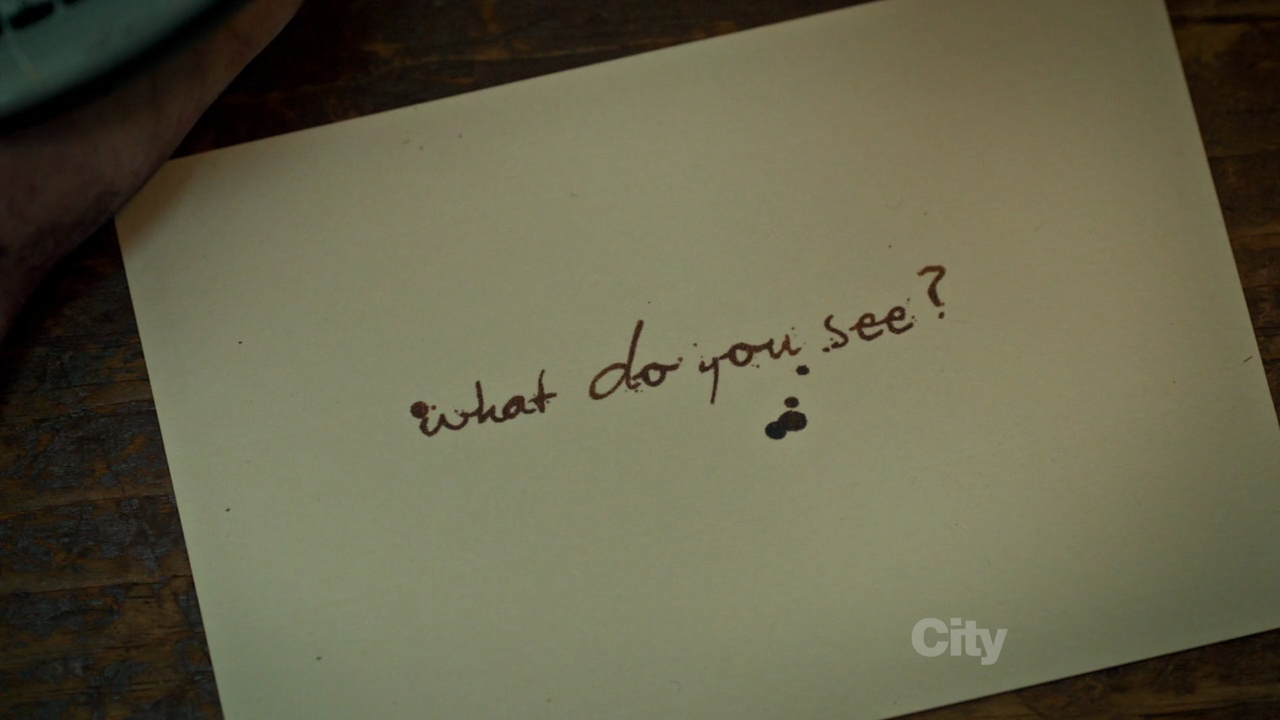 While Miriam Lass’s severed arm is in general clearly a message for Jack, the card seems to specifically target Will by appealing to the visionary quality of his deductions. Notably, the specific question “what do you see” has been asked twice before in the show, once by Will to (the already dead) Budish in response to his saying he can see what Will really is, and by Jack to Will when looking at a crime scene. 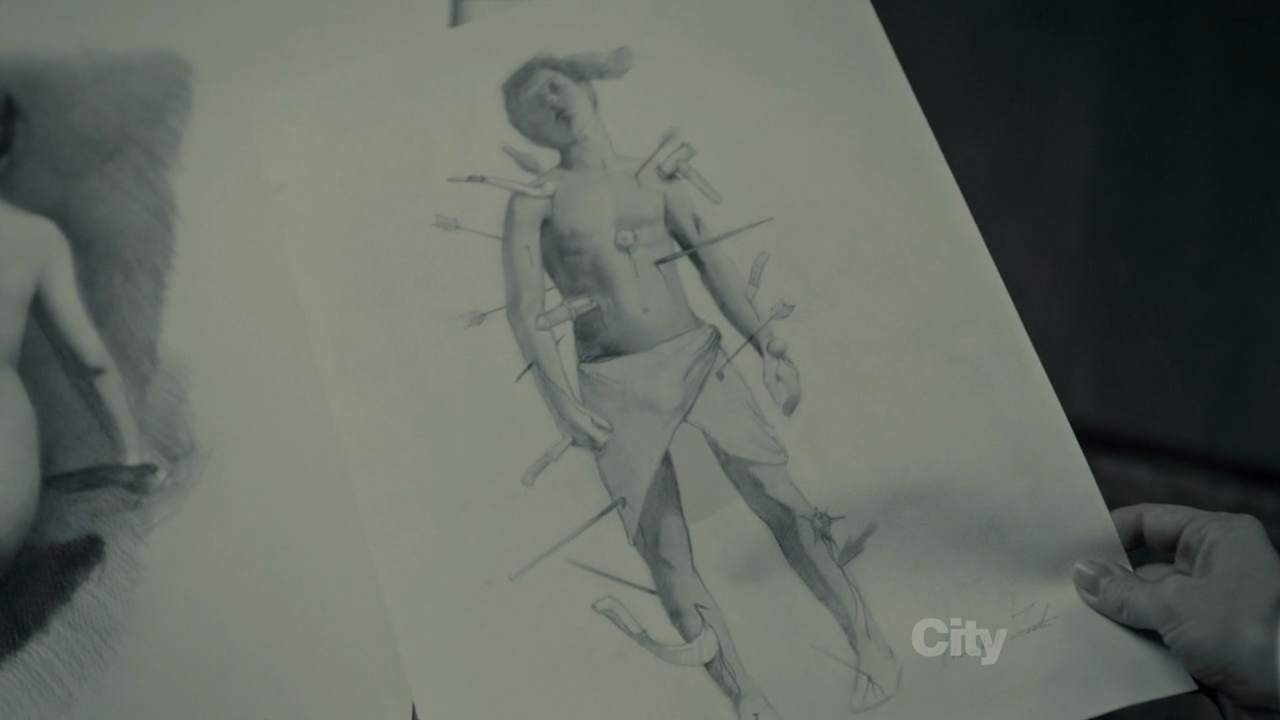 Miriam’s investigation of Hannibal repurposes how Will is said to have caught him in Red Dragon, that approach no longer making sense given the show’s approach. Miriam, of course, fares rather worse than Will did. But this scene is also significant because it’s the first time that we actually see Hannibal being a murderer. Fuller’s promotional claim about the series that “if the audience didn’t know who he was, they wouldn’t see him coming” was never entirely honest given things like the “they know” call and a number of editing-based connections (to say nothing of the fast cut to a guy running through the forest on the “he should have hopped faster” joke in “Œuf”), but it’s still true that it’s not until “Entrée” that the audience is permitted to actually see Hannibal kill. (And even here, Miriam turns out to be alive.)