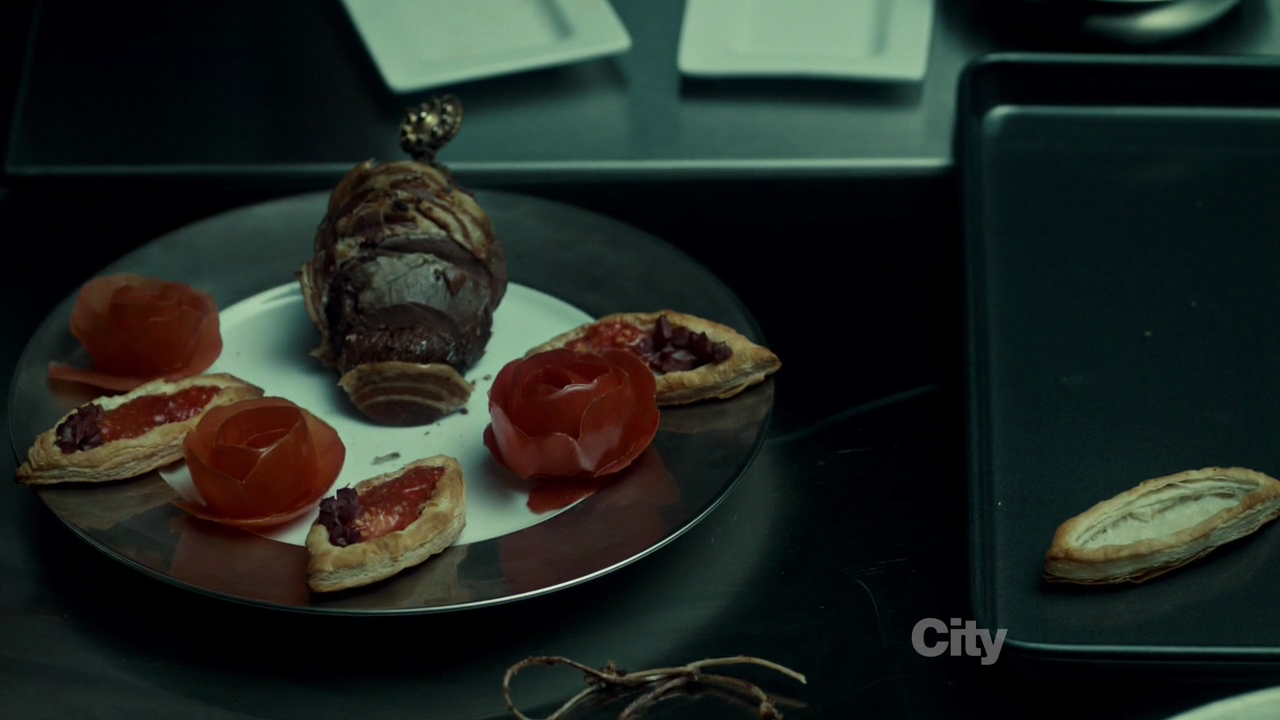 SORBET: A frozen dessert made of sweetened, flavored water. In this case, it seems meant to suggest a palate cleanser, resetting the meal after the extremes of “Entrée.”

WILL GRAHAM: I use the term Sounders because it refers to a small group of pigs. That’s how he sees his victims. Not as people, not as prey. Pigs.

The particulars of what it means to see people as pigs is enormously vexed, and I can’t not gesture at my “Capitalist Pig” series of essays, the first two of which are focused specifically on this. Broadly, though, pigs are second only to monkeys as animals that symbolically reflect our own humanity back on us. They are also intimately connected with food – their two basic utilities to a culture are either as garbage disposal or as an exceedingly efficient food source. Much like the pig itself, every part of this dense nexus of meaning is used in the construction of the underlying metaphor here.

WILL GRAHAM: True to his established pattern, the Chesapeake Ripper has remained consistently theatrical.

“Theatrical” is an interesting description here, given that Hannibal’s medium is the fixed artistic tableau, as opposed to the visceral immediacy of live interaction. Indeed, “theatrical” is in a very real sense the one thing a killer-at-large cannot be, in that he must necessarily remain a tangible absence at the scene. Of course, Hannibal’s role is more as writer/director/demiurge than actor, and so his absence is arguably an organic part of the process, with his victims being the actors. (Compare with the previous “sounders” metaphor for humorous writerly commentary on actors.) Another interpretation, however, is that the tableaus are the negative space of the theater after the performance has happened – sets and props left behind after a performance that the police have already missed. This interpretation has the advantage of matching well with Will’s deductive gifts. A third reading, in which the theater is the ongoing public saga of fascination, would be supported by Freddie Lounds, and is at least what Hannibal is engaging in with Miriam. As usual, these interpretations, while contradictory, are not mutually exclusive. 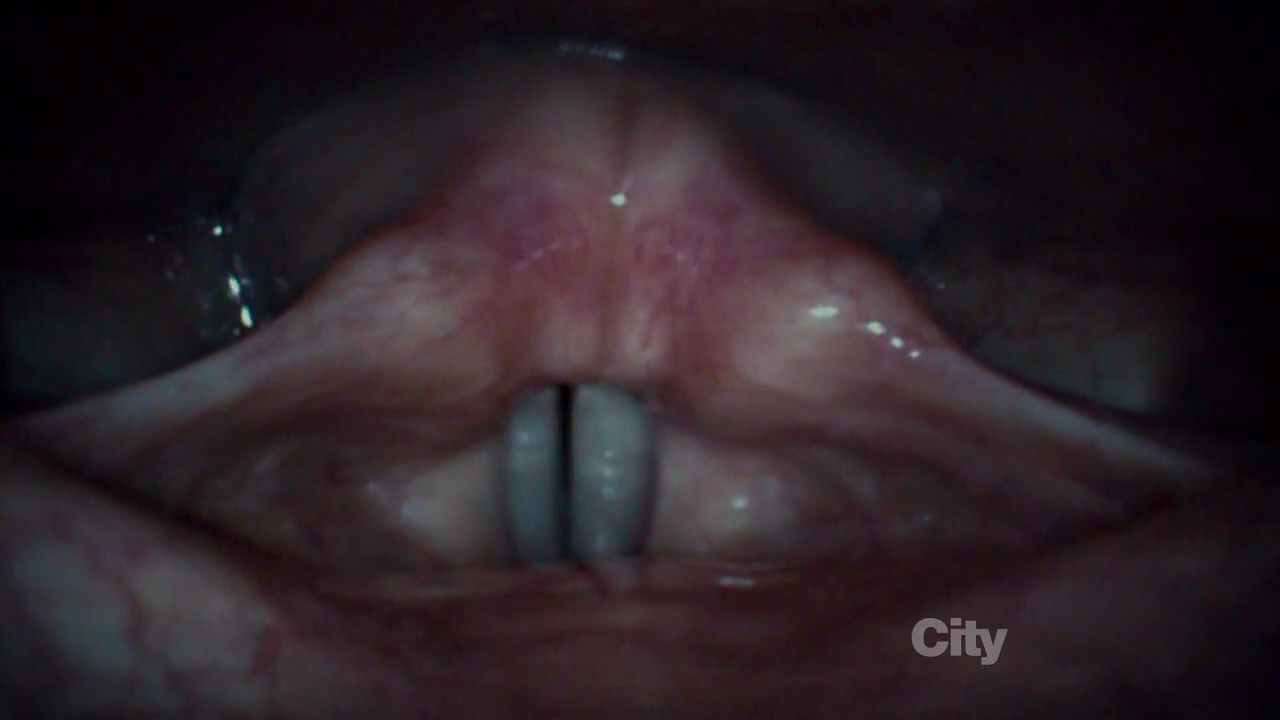 This scene, which opens inside the singer’s body before zooming into Hannibal’s ear as the sound reaches it, is one of the show’s more charming demonstrations of viscerality to date. The real detail that makes the scene hilarious, however, is the fact that the concert is a benefit for hunger relief.

MRS. KOMEDA: I said properly. Means dinner and the show. Have you seen him cook? It’s an entire performance. He used to throw such exquisite dinner parties. You heard me. Used to.

HANNIBAL: I will again. Once inspiration strikes. I cannot force a feast. A feast must present itself.

MR. KOMEDA: It’s a dinner party, not a unicorn.

HANNIBAL: But the feast is life. You put the life in your belly and you live.

Hannibal’s claims here are interesting in light of the killing spree he goes on, which is focused on old grudges plucked from his reserve of recipe and business cards. The feast has clearly presented itself – what’s lacking is the inspiration for the performance. Of course, in practice the feast was delayed – this was originally slotted as episode four, but the initial cut failed to pass muster, and it was reworked with two days of additional shooting to instead tie into the Miriam Lass cliffhanger from “Entrée.” The central reason for this was that Hannibal’s elaborate dinner party was simply too early, and belonged after the audience has seen him directly revealed as the Ripper.

“The feast is life” is of course one of the show’s most iconic declarations of viewpoint.

JACK CRAWFORD: Are you sure?

WILL GRAHAM: More or less.

JACK CRAWFORD: Why are you sure?

WILL GRAHAM: The Ripper left a victim in a church pew using his tongue as a page marker in the Bible he was holding. This isn’t that.

It’s notable that this is a judgment of pure aesthetics, without even the trappings of psychology to ground it. To some extent this is a fair critique of criminal profiling, which has decidedly dodgy methodological validity, and which does not stand up great to empirical scrutiny. One study, notably, offered a variety of groups, including professional profilers and laypeople to create profiles, with all groups performing about as well. Of course, art critics were not included, so the jury’s still out.

JACK CRAWFORD: How do you see the Ripper, Will?

WILL GRAHAM I see him as one of those pitiful things sometimes born in hospitals. They feed it, keep it warm, yet they don’t put it on the machines. They let it die. But he doesn’t die. He looks normal, and nobody can tell what he is.

Another passage straight out of Red Dragon, and a rare moment in which the show opts to puncture the myth of Hannibal, presenting him as a fundamentally wretched creature instead of as a figure of Mephistophelean grandeur. This is an important counterweight to the episode in which we first see Hannibal go on a proper murder spree.

HANNIBAL: As honest as anyone.

BEDELIA: Not really. I have conversations with a version of you and hope the actual you gets what he needs.

HANNIBAL: A version of me?

BEDELIA: Naturally, I respect its meticulous construction, but you are wearing a very well tailored person suit.

At last, Bedelia du Maurier makes her debut. This is one of the show’s most astonishing inventions – Hannibal’s psychiatrist. She recognizes the basic outline of the game Hannibal is playing with her – engaging honestly but with crucial omissions, daring her to see through the veil and understand what she’s actually dealing with. “Person suit,” of course, evokes Buffalo Bill from Silence of the Lambs, although what Bedelia is talking about is rather less literal.

HANNIBAL: I think something pink, don’t you?

Nice, if unsurprising, to see Hannibal stand up for rosé, which is one of those things that has one tier of snobbishness that’s against it and another that rejects the backlash as simplistic and rooted in ignorance of rosé beyond white zinfandel.

WILL GRAHAM: Have you been drinking?

HANNIBAL: I had a glass of wine with my last appointment.

The shift from Bedelia’s house to Hannibal’s office while maintaining the continuity of Hannibal drinking wine is an utterly unmotivated bit of reality distortion that led to initial speculation that Bedelia might not actually be real. The discontinuity was likely an artifact of the reshoots (the Bedelia scene was originally scripted for Hannibal’s office), but this is Hannibal and there’s little reason to expect spatio-temporal coherence.

WILL GRAHAM: The Chesapeake Ripper wants to perform. Every brutal choice has elegance, grace. His mutilations hide the true nature of his crimes.

Here we get a clarification/variation of Hannibal’s previously mentioned theatricality, in which it’s positioned as desire, as opposed to a straightforward aspect of the murders. In this context it becomes a common artistic desire for immediacy. Hannibal yearns for the direct access to the audience that performance allows, but the nature of his medium requires distance. The content of his art, therefore, is constantly about efforts to bridge that impassible divide. This is worth reading in direct context with his conversation with Bedelia regarding loneliness.

HANNIBAL: I love your pallet.

ALANA BLOOM: I love your beer. I taste oak. What else do I taste in there?

HANNIBAL: I will only answer yes or no.

So people, then. The detail that the beer has been in progress for two years is intriguing – another case where the timeline and prehistory of Hannibal becomes complex. Part of this is due to a natural but fundamentally misleading instinct to treat Hannibal as though he operates with a broad master plan, when in fact he is largely an improvisational character. But the conversation subsequently offers a sort of explanation for how Hannibal and Will remained at a distance up to this point in Alanna’s active decision not to mention him to Hannibal, a decision born out of her desire that people leave him alone. As usual, Alanna does not resolve into an entirely satisfying portrait here, but she remains intriguing. 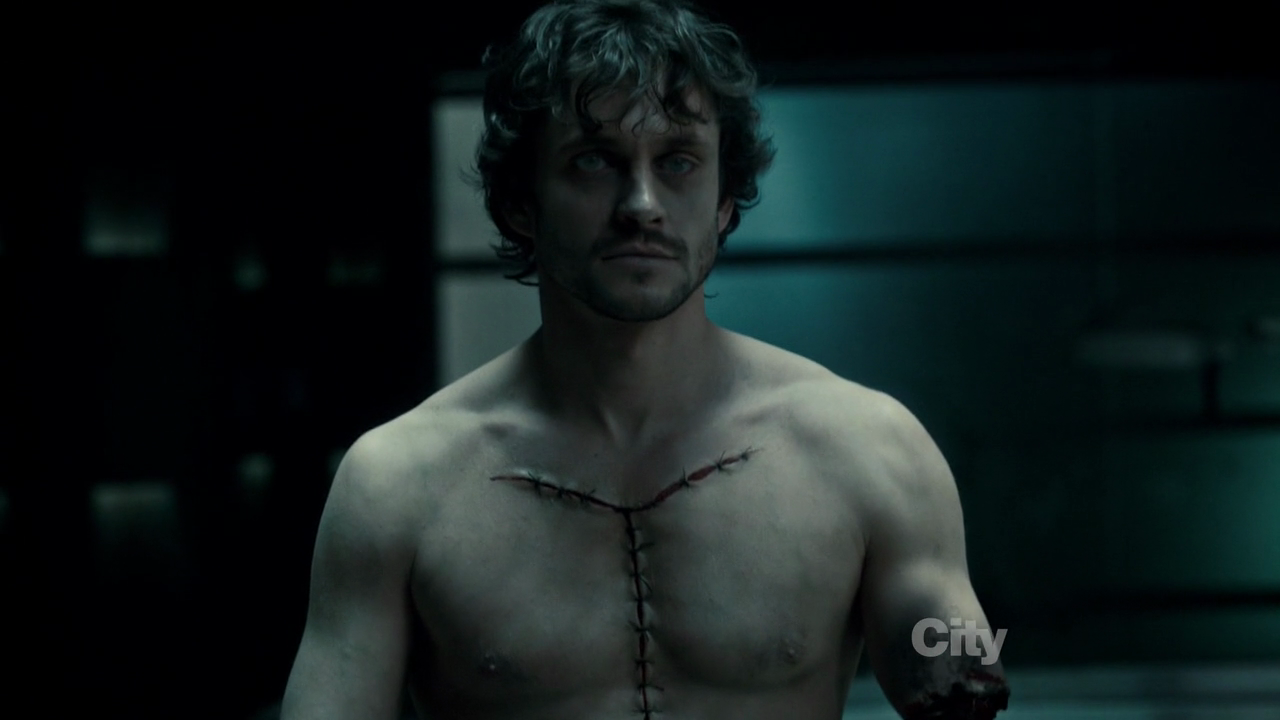 So much for Jack knowing when he’s awake.

FRANKLYN: Cheese is a passion. Ever hear of Tyromancy?

FRANKLYN: It was my gateway to cheese. A magic eight ball you get to eat.

Franklyn is presumably crafting a spectacularly pathetic lie here, and yet the imaginative possibilities of someone getting into cheese via an obscure and largely abandoned method of divination are too enticing to pass up. The most common method of tyromancy is to read omens into the curds as they form, though other practices existed.

WILL GRAHAM: What do you see, Doctor?

HANNIBAL: Sum up the Ripper in so many words? (pause) Words are living things. They have personality, point of view, agenda.

The episode’s second reiteration of “Entrée”’s closing question (presumably one of the things added when this episode was reworked) becomes the occasion for a genuinely staggering pair of lines. First is Hannibal’s dodging of the question, which is poetic, if a bit bland in content. Then Will adds flavor to the mix with a spin that is baffling and suggestive all at once.

WILL GRAHAM: The Chesapeake Ripper had no reason to humiliate Miriam Lass.

HANNIBAL: Seems to me, he was humiliating someone when he cut off her arm.

WILL GRAHAM: He was humiliating Jack Crawford.

HANNIBAL: Did it work?

Hannibal’s final line was an addition after the shooting script, and is a delightful moment of insecurity on his part, especially given his closing conversation with Jack in “Entrée,” which should have provided verification that it did. The line also provides motivation for Hannibal’s correction of Will, which is otherwise the only time in the conversation where Hannibal provides any actual insights on the Ripper.

HANNIBAL: He was removing the kidney. Poorly.

“Not a critic” is just not a position Hannibal occupies.

WILL GRAHAM: Why did you stop being a surgeon?

HANNIBAL: I killed someone. More accurately, I couldn’t save someone. But it felt like killing them.

WILL GRAHAM: You were an Emergency Room surgeon. It has to happen from time to time.

HANNIBAL: It happened one time too many. I transferred my passion for anatomy into the culinary arts. I fix minds instead of bodies and no one’s died as a result of my therapy.

Hannibal’s usual “lie with the absolute truth,” complete with the suggestive phrase “passion for anatomy” is followed immediately by an outright lie, as we will find out when the details of his relationship with Bedelia eventually emerges. Needless to say, the lie is only going to become more of one from here.