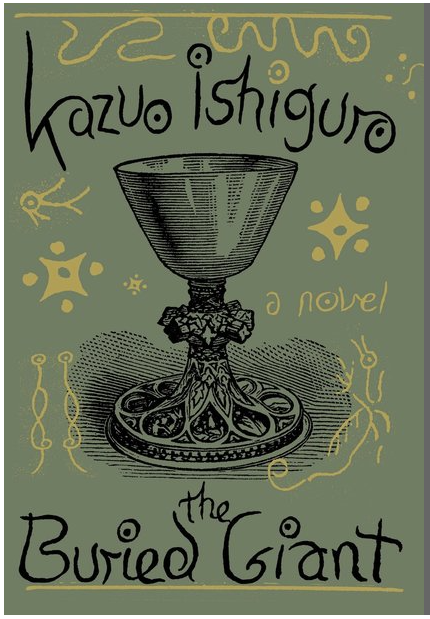 The Buried Giant, by Kazuo Ishiguro
Reviewed by Jack Graham
Eligible for Best Novel and available for purchase here.

Nobody expected Kazuo Ishiguro’s first novel in ten years to be a fantasy novel, but it is – complete with dragons, ogres, pixies, and spells. The novel is set in a mythic version of the British past, during an uneasy truce between Britons and Saxons, a few decades after the death of King Arthur. The setting and style both rely as much uponThe Sword in the Stone as on Chaucer or Geoffrey of Monmouth.

Ishiguro (probably still best known for The Remains of the Day) is one of those literary authors who experiments with genre fiction. His last novel, Never Let Me Go, was written like a conventional ‘realist’ literary novel, but the backdrop and plot of the story depended upon both the SF trope of cloning and the SF technique of discursive worldbuilding. Unlike most critics I found Never Let Me Go disappointing, at least as SF. The SF elements didn’t do much except introduce a rumination on cloning that struck me as something of a moralistic strawman, and a metaphor about the fleeting nature of human life – not to give too much away: the novel is about people who die young – which left you wondering why he didn’t just write about how old people feel like time has gone by too fast. Literary novelists often do this sort of thing when they adopt SF inflections (c.f. Margaret Atwood). They grab the power of the fantastic to provide metaphors, but in so doing they disrespect the categories of the fantastic by using them to say things they could just as easily say literally. The great power of the fantastic is not only that it comes loaded with meaning, but also that it allows for polysemy, for multiplicity and instability of interpretation.
The Buried Giant, unlike Never Let Me Go, has met a mixed reception from critics, but is far less guilty of this sort of thing. Generally, Ishiguro is happy to present the literal fantastic as meaning what is says it means, even if it isn’t spelled out. For instance, boatmen who take elderly couples across the water to magic islands are literally taking the dead to the next world. They’re not a redundant metaphor for death, they are just a description of death. The description of death is couched in mythical terms because the story occurs in a mythical version of history. Paradoxically, this literalism (i.e. the dragon is pretty much just a dragon) means that the book refuses to foreclose upon easy, straightforward meanings. Clearly the dragon means something, but we are not being instructed by the author in what this is. Apparently intelligent people have complained about this. I relished it.
The book is clearly about all sorts of things, some of them perennial Ishiguro obsessions. Old age, memory, failure of communication, wasted opportunity, and self-delusion, for example. At the heart of the novel is the question of memory, both personal and historical. A mist of amnesia pervades the land, causing people to forget their own pasts as well as the history of their societies. Ishiguro allows this amnesia to be a literal curse, cast for reasons which can be interpreted as morally shoddy or well-intentioned, depending on your point of view. In any case, the main characters – an elderly couple called Axl and Beatrice – are journeying to see their half-forgotten son, and gradually becoming more drawn into a struggle over whether or not to end the amnesia. They themselves hope to regain their memories, even if these memories bring them pain. Other characters they encounter along their journey are charged with protecting or dispelling the amnesia for political reasons. The novel thus grapples with how much of our normal interpersonal and social functioning is based as much on forgetting as on remembrance, and the wider political issues concerning our memory of war. There is discussion of cycles of violence, and the rival claims of justice and peace. Is it better for crimes to be remembered and punished, or to be forgotten so that old grudges can be allowed to die? To what extent is war based upon popular resentments and antagonisms, and how much upon the machinations of rulers? You could read this as being about, for instance, the Middle East… but the novel refuses to foreclose upon how you read it. You are presented with literal amnesia, which literally comes from a supernatural source, and left to get on with interpreting it for yourself. This is not only a welcome embrace of the fecundity of interpretation allowed by much genre fiction, which revels in the fantastic for its own sake, but also harks back to the best of the allegorical tradition, in which the meanings are deliberately made unstable and open.
The book won’t be likely to thrill anybody who goes to it expecting something like a George R. R. Martin novel, nor even a T. H. White novel. It’s as serious, slow, steady, sedate and sad as the elderly protagonists it mostly follows. The characters speak in a way resembling the formalised speech of characters in pre-modern, pre-realist works of narrative (everyone is terribly eloquent and polite, pretty much all the time). Ishiguro’s prose is as clean and precise as ever, with his usual weaponized banality (i.e. a smooth surface on a deep, dark pond). There are no flights of fancy, though there are some surreal sequences and one or two surprising descriptions of monsters. It’s also mostly written in the third person, in which Ishiguro never feels quite at home (indeed, the book comes alive during the two internal monologues we are privy to, which are couched in a first person voice filled with cognitive dissonance, which is much more Ishiguro’s home turf). All the same, this is a fine novel, and a fascinating experiment which, I feel, represents a really fertile fusion of the tactics of literary and genre fiction.
Woman at Exhibition by E. Lily Yu
Reviewed by William Shaw
Eligible for Best Short Story, and available here.

Fittingly enough for a story hung up on the visual arts, the appeal of ‘Woman at Exhibition’ is difficult to put into words.

For one thing, the plot overview sounds a little bit twee and hipsterish; a young woman has a not-quite-argument with her fiancée, and goes to an art exhibition to get away from it. She’s struck by the beauty of one painting in particular, and in a Hannibalistic version of Stendhal syndrome, starts to eat it. From there things manage to get even stranger, as our protagonist is shown a series of other paintings, and the story becomes a kind of Angela Carter short crossed with an art catalogue. It’s an intriguing idea, but it doesn’t quite explain what makes this story so special.

Part of it is that Yu’s prose is simply gorgeous. Yu has a knack for memorable phrases and the self-awareness to know when to undercut her more flowery passages with moments of domesticity, such as the wonderful moment early on: “Luke slung his saxophone over his shoulder and kissed her. The touch of his mouth sent sparks crackling and snapping through her, bright as magnesium, and she softened into him. The saxophone bumped against her hips.”

Yu manages to vividly characterise her story’s main players in the small amount of text she has to work with, and displays a good ear for dialogue. But what really makes this story stick in the mind is the anger which animates it. As the title suggests, this is a story about how women are treated in the world of art, and Yu makes a number of barbed comments about the male gaze and female interiority in the visual arts, giving the whole thing an air of eloquent and righteous anger under the elaborate, painterly surface.

By turns sweet, funny, dark and bitter, ‘Woman at Exhibition’ is a beautiful thing, and more than deserving of consideration at this year’s Hugo Awards. Its mesmerising power and bomb-throwing rage make it the equal of any story I have read this year, science fiction or otherwise. It’s well worth checking out, so long as you don’t get peckish. This is a story that bites back. 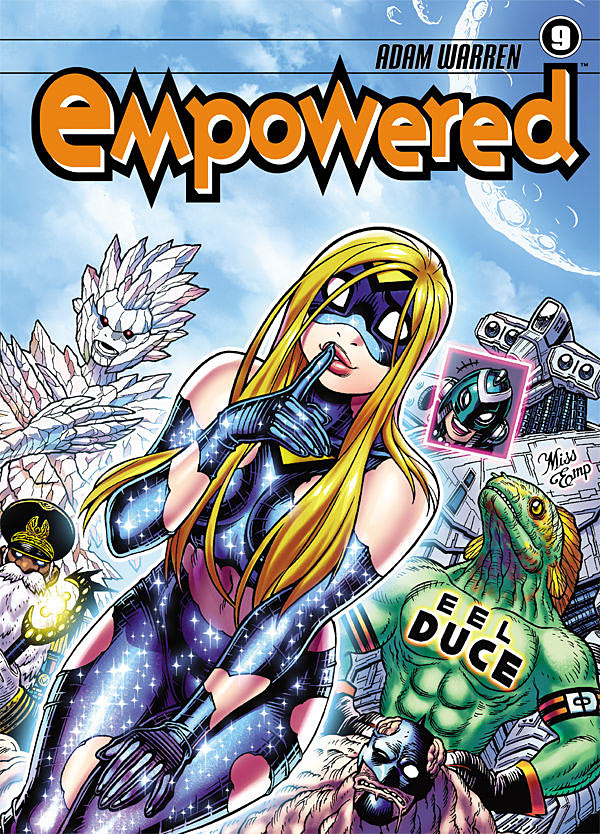 Eligible for Best Graphic Story, and available for purchase here.

I find the Empowered stories to be a fun combination of superhero adventure, superhero comedy, and soap opera. This mixture derives from it’s origins: a number of ‘heroine in distress’ art commissions which were used as the basis for characters in the series, giving them emotional depth and allowing the author to play with story tropes. In particular, it explores how the title heroine feels about being continually captured, tied-up, and having video footage of her in that state uploaded onto the internet, and how she copes.

This volume has a major resolution of many of the plot elements that have been building over the last few years. On the one hand, that does mean that there is a lot of back story – which is largely handled smoothly with info dumps from video documentaries, presentation of evidence in court, or good old villainous monologues. On the other hand, there are a number of very satisfying scenes where Empowered fights through and triumphs over the problems set in motion in previous volumes – whether that be her defeating dozens of supervillains who are targeting her for plot reasons, or her facing down her fellow heroes with evidence of her innocence and her follow-up demand for full team membership.

The art is black and white greyscale, heavily manga influenced, and beautifully detailed. The characters who are good looking are very good looking, as befits something that derived from cheesecake/beefcake art. And the characters whose costumes or physiologies give them an inhuman appearance look every bit as weird as any of the grotesques created by L. Frank Baum for his Oz books.