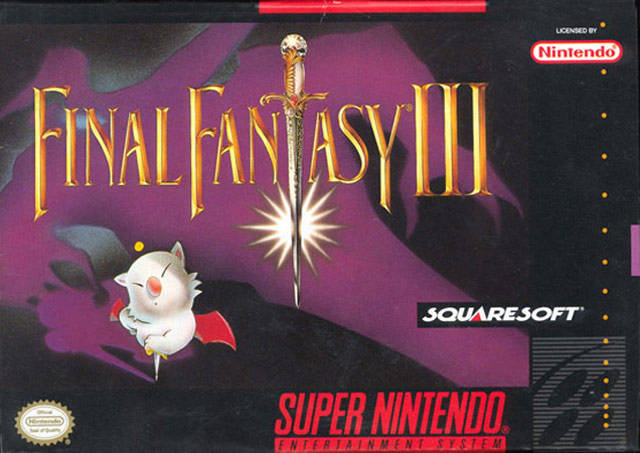 The narrative begins with a woman. She doesn’t have a name, or even a will of her own. She is being mind-controlled, escorted by soldiers into a mine for reasons unknown. She is led deep into the caves, until she stands before a monster trapped in ice. The creature stirs. It vaporizes the soldiers. It communes with the girl; they are alike, bound, their power subdued. Fade to black.

Final Fantasy is for girls. When I started playing Final Fantasy III, I didn’t know this. In 1994, I don’t think anyone knew this yet, because video games were only and forever for boys. Which is a blessing; when I was ten years old, anything that was remotely “for girls” sent me running in the other direction. I was terrified of being seen adjacent to femininity, for fear that someone would somehow figure out the secret at the core of me. But over the years, it developed a reputation for being a ‘girly’ series. It focuses on romance plots. It has an aesthetic that often goes out of its way to be cute or pretty.

The woman stands before the creature again. This time she has friends with her. She has come a long way, fought and suffered. She doesn’t even know why, really. Her past is a blur. But now the creature reveals the truth: she is a monster, the same as he. She stands before her friends, exposed, outed. She can’t deny what she is, and they can’t hide the shock and fear (and is that disgust?) in their eyes. She flees, hurt and confused and angry. Fade to black.

So Final Fantasy is ‘for girls’. Aside from a feeling of retroactive vindication, what does this signify? In the historical narrative that inevitably leads to Gamergate, Final Fantasy is both an oasis and a rallying banner. It can be our Folkvangr. A place to cuddle up with some moogles for a while, then ride out into the fray on our chocobos. And this trend extends all the way to the present. Most installments in the series have strong, prominent female characters. Final Fantasy XIV has one of the best gender ratios I’ve encountered in an MMO, and an overwhelmingly positive and friendly community. It is far from perfect, but compared to the caustic communities I’ve experienced elsewhere, it’s a breath of fresh air. (Also, Final Fantasy XIV literally allows you to fight Gamergate)

The woman’s friends want to help. They look for others like her; the outcast monsters that are only barely even considered people. They don’t find any of the creatures, but they find some of their history. A history of being murdered and downtrodden, of callous indifference and outright brutality from figures of authority. They show it to the woman, and it fills her with determination. She succeeds where they have failed, driven in a way they aren’t, can’t be despite their desire to help her. She finds her people, her family. And when she shares the stories she has uncovered, they are outraged. Fade to black.

But enough about trans girls. I’ve written extensively about being a woman, and about being trans. They are necessary parts of contextualizing my history, but they are not the entirety of me. Let’s talk about something else.

When I was ten years old, I became an Anarchist. In context, this wasn’t a surprising development. I learned to lie to authority figures at a very, very young age. Thanks to my older brother, “Killing in the Name” was a regular part of the background soundtrack in my life. The media was still regularly referencing Rodney King and the LA riots. Even for a kid who spent most of her time lost in books and video games, “the police can’t be trusted” and “the government is corrupt” were ideas that were hard to avoid. The result was a very passive Anarchy, to be sure: just the simple belief that “government is bad and someone should break it”. But the seeds had definitely taken root.

The monsters, swearing revenge for the treatment of their brethren, rise up against the government that treated them poorly. It is pure power fantasy made manifest; they descend upon the capital and tear it apart. The city burns, the soldiers flee in terror. Nothing can stand before their fury. The leaders beg for peace, promise a redress of grievances. They have won. Fade to black.

Final Fantasy III is a story about resistance to corrupt authority. It set up a template that many future Final Fantasy games would follow: a corrupt government/empire/corporation/religion is doing a series of sinister things. A band of heroes thrown together by fate have to stop them. The corrupt government/empire/corporation/religion is ultimately just a tool being used by a power-hungry advisor/warlord/executive/priest, who is the real evil the heroes must defeat. (I just described, roughly, the plots of Final Fantasies III, VII, X, XII, XIII, and XIV)

And so Final Fantasy was the final nail in the coffin of my respect for authority. It was also the genesis of my moral consciousness. It taught me to embrace difference. To question the things that people take for granted. To care about the people who are ignored or cast out by the social order.

In a word, it made me queer.

Of course, the defeated leaders of the corrupt government can’t be trusted. The monsters should realize that, but they don’t. Though they’ve been cast as monstrous, they are in truth hopeful, trusting. When their guard is down, they are betrayed, killed, their victory short-lived. And their deaths fuel the villain’s ascent to a dark Godhood. Despite every effort on the part of our heroes, he tears the land asunder. Fade to black.

Hope is a hard thing to hold onto, and becoming a teenager extinguished it in me. And it wasn’t just the increasing gender dysphoria. As I grew more socially aware, a sense of helplessness settled over me. I went through a very early cynical, bitter phase. The world wasn’t fair. It wasn’t fair biologically; some people had to be boys. It wasn’t fair socioeconomically; some of my friends had so much more than me, and some of them had so much less. It wasn’t fair politically; for some reason, we kept bombing countries who didn’t have anything to fight back with.

The narrative begins with a woman. A different woman this time. We already know her name; in fact, we know her well. We have stood beside her, fought and suffered and failed. She awakens to a world in ruins; her friends lost or dead, scattered according to the whims of a callous god. All of their work, their striving and resistance, was for naught. Fate has torn them asunder. There is no escape from the all-seeing eye of God. She hikes to the top of a cliff overlooking the poisoned ocean. She pauses, looking out to sea, thinking back at everything she had and has lost. She jumps, a final sacrifice in a dead, hopeless world. Fade to black.

When I was fourteen years old, I tried to kill myself. I’ve described this before. I was out of hope. The world was shit, I hated my body, and I simply couldn’t imagine a future where any of this got better. I tried to distract myself with video games and books, (and, quite lately, the Internet) but it wasn’t enough. The hopelessness drained the color out of everything, until the distractions just didn’t bring me any more pleasure.

Somehow, miraculously, she survives the jump. She awakens on the beach, filled with a new resolve. She sets out to find her friends, to make some kind of stand against all odds. Slowly, the heroes find each other again. In each others’ presence, they feel hopeful again, resolute. Together, they stand stronger than they did apart. They will do whatever it takes to survive, and make the world a better place in the process, if they can. Fade to black.

The first place I found people who didn’t reject me was a band of Anarchist hippies who called themselves The Grove. In 2001, the term “Social Justice Warrior” didn’t exist yet, but these were them. We would go out to art crawls and hand out anti-war pamphlets. We would create art projects and meta-art projects together. Or sometimes just sit around and smoke pot and listen to music. I always felt a bit like I was being humored more than fully accepted, but it was ok. I agreed with their politics, and it felt like we were doing something, at least. It gave me hope.