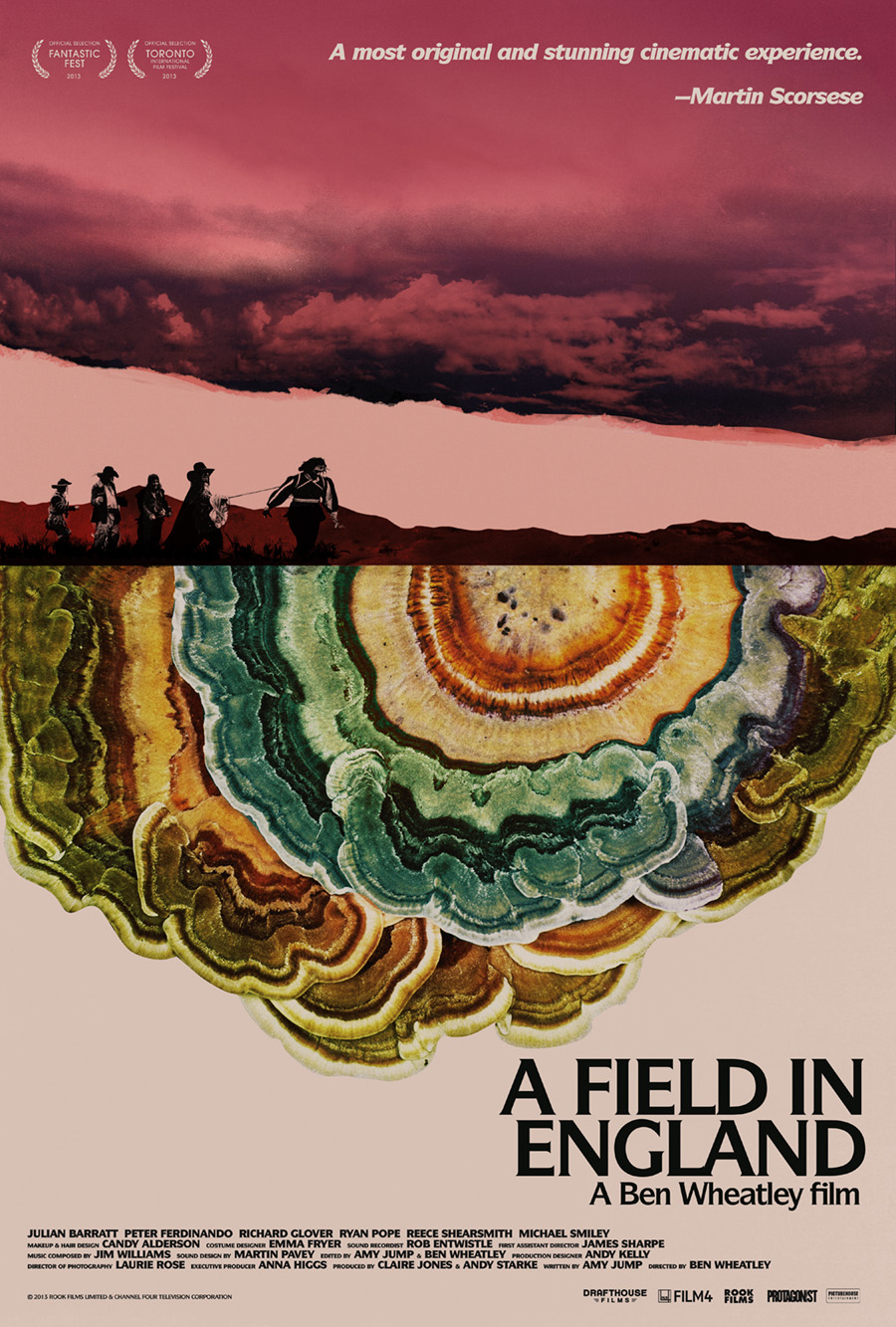 A Field in England is a precise antipode to High-Rise, a fact acknowledged by Ben Wheatley, who has spoken about the way in which he is inclined to make one project a reaction against the previous one. But the thing about the alchemical union of opposites is that it works largely because of the similarities. Just as “up” and “down” presuppose movement in three-dimensional space and “left” and “right” presuppose neoliberal democracy, High-Rise and A Field in England presuppose a director doing sci-fi/fantasy inflected period pieces rooted in the psychogeographies of English spaces. In some understandings of conceptual space this is how the hypercubic prison works – through the systematic construction of axes bounded by opposites that, when multiplied sufficiently, create a territory that is at once infinite and contained.

This is in essence the problem that faces Whitehead, who winds his way through a recurrent series of at best gradual enlightenments in pursuit of no obvious goal or trajectory for escape. More to the point, his problem is heavily location-dependent, in both spatial and temporal senses. Spatially he is confined to the eponymous field, a setting we’ll unpick momentarily. Temporally, however, he is bound by the English Civil War. It has often been suggested that this event serves as the origin for the contemporary socio-political system, an argument that’s generally based on reading it as a transition between the established aristocracy of Charles I and the revolutionary fervor of the Puritans. This is an oversimplification in countless regards, not least that it misunderstands history as something with an origin as opposed to as a series of debts inherited and bloodily paid off from era to era. The English Civil War is certainly an instance of this, but it’s ridiculous to suggest that what emerged from it is somehow a sui generis origin as opposed to an if not inevitable at least entirely sensible consequence of what came before.

Nevertheless, it’s clear that Whitehead straddles both sides of this transition, or perhaps more accurately, is stepping over the divide himself.  His status as an alchemist clearly situates him in the world that is receding. But the arc of his slow ascension is clearly towards a measure of individual liberty and away from the crass and domineering tyranny offered by O’Neil, which affiliates him more with the Puritans. Like us, he’s trapped on the inexorable slide down history’s birth canal – just from a substantively different angle. Or, if you prefer something in keeping with ascension, headed up the chimney, an identity gone up in smoke.

This leaves location: a field in England. Central to this is its raw genericness. There are a lot of fields in England, another consequence of the way in which the whole of the island is the product of human development and intervention. And there were a lot of them in the Civil War; Alan Moore is fond of claiming one near Northampton as the place where it was won, although that was merely the first of three, and dialogue about Pembroke places this one during the second, a few years later. Part of this is simply a matter of the film’s concept – it was designed to be shot in twelve days for very cheap. In this regard, the genericness of the field was not merely a means of creating a suitable purgatory for Whitehead to cycle endlessly through, but a practical conceit necessary to make the film.

In terms of our interests, the field is also understandable as an opposite pole from the high-rise, with which it shares its genericness and its status as a product of human design. The difference, of course, is one of city and countryside. The high-rise is a towering presence – a monolith designed to offer a constant reminder of its own existence. But the field is tangible through its absence – it is first and foremost a place where nothing is. This makes it a suitable site for Whitehead’s visionary experience in exactly the same way that the urban setting of the high-rise makes it suitable for social collapse.

Which brings us to the one really notable thing about the field, namely the profusion of psilocybin mushrooms within it. These are temporally complex even before one gets into their psychoactive properties. On the one hand, they are an entirely period-appropriate element, as is the strange business with pulling O’Neil out of the circle with a rope. On the other, from the perspective of 2013 the presence of psychedelics point unmistakably towards the 1960s counterculture that Ballard sprung out of. (Ballard himself was not a big drug user [he tried LSD once and had a bad trip, later rationalizing that the psychoactive effects of LSD and his imagination were simply a bad fit for one another], but at this point in the exercise the goal is not so much to draw a clear chain of causality as to begin understanding the recursion of themes and patterns.) The fact that Whitehead’s ascension is fueled by a “modern” drug force us to reckon with it as something more than just a byproduct of the philosophical foundations of a war four centuries past, daring us to understand it instead as something related to ongoing historical processes.

In practical terms, what the short circuit from the 1640s to 1960s does is bypass the Enlightenment by linking the Puritan movement from which it blossomed directly to the beginnings of post-rationality some three hundred years later. But in some ways the more interesting elision comes later down the pipeline in the form of romanticism. The celebration of individual vision that’s at the heart of romanticism is certainly only a few blood debts removed from the English Civil War, and was in turn the ideological heart of mid-20th century psychedelic counterculture. But by moving directly from one to the other Wheatley and Jump cut out the standard ideological trappings of psychedelia.

This is reflected in the film: the primary use of psilocybin for the bulk of the story is the psychological domination of Friend and Cutler, a utility that jars sharply with the tie-dyed self-actualization of the “turn on, tune in, drop out” set. In fact, until very close to the end of the film the thing presented as the most similar to the drug is O’Neil’s physical torture of Whitehead to turn him into a grinning, stupefied divining rod, a fact that establishes them primarily as an instrument of cruel and brutal tyranny.

And then there’s the final act, with its visually stunning ultra-fast-cut montage after Whitehead ingests a shit-ton of mushrooms in the course of finally confronting and overthrowing O’Neil. It’s a visual tour de force, as fine a piece of cinematic psychedelia as has ever been shot, and rightly the centerpiece of the film. For all that it deforms the semiotics of psilocybin, it is ultimately utterly and sincerely credulous of its basic potency. This is reinforced by O’Neil’s uncanny entrance into proceedings, literally pulled from the ground and visibly dazed by whatever experience he’s just had, a sequence which, whatever ambiguity it maintains about Whitehead’s final fate, commits the film to a fundamental sincerity regarding the “magic” part of the mushrooms.

This is not, of course, out of keeping with the 20th century countercultural view of psychedelia. It scarcely could be in an early 21st century film; that debt’s far from paid. But it links itself to the ragged outer fringes of that hypercube – stuff in the vein of Terence McKenna, who suggested that psilocybin is in fact the product of an alien intelligence attempting to communicate with (i.e fuck) language-using species. This approach has no obvious advantages that fucking with car crashes did not, and so it is unlikely to serve as an escape hatch in and of itself (certainly Wheatley doesn’t present it as one), but there’s a certain potential to its austere inhumanity and true weird fiction tone that is at least not a facet of the monstrous design we’ve explored yet.

Let’s push further, then. What’s most interesting about McKenna’s view of psilocybin is not the specific idea of alien mushroom intelligences so much as the idea of psychedelia as a means of accessing some hidden and external truth. This is very much in play in A Field in England, both in the repeated image of Whitehead staring at a strange, pulsating black circle in the sky (which predates his ingestion of the mushrooms) and in the basic presence of alchemy and thus the occult, which is predicated on the idea of hidden truth. This in turn resonates with several of our previous observations. Emboitment, after all, is a form of concealment. The notion that an escape route being marked by scar tissue also works in this direction. Even the half-joking détourning of the classic Situationist slogan becomes suggestive in this regard (as of course does the original).

Perhaps most significant, however, is the newfound clarity brought to our understanding of modernist architecture’s zeal to endlessly pave over the ghosts of the past. In one sense this is the only way to deal with ghosts. One cannot simply remove them, after all – exhuming the occult does not destroy it, but instead makes it present and immediate. Instead one must occlude it again, burying it deeper and deeper so that, like the hazily defined treasure in the field, it cannot be exhumed at all.

Our next question, then, is clear: what haunts this place?