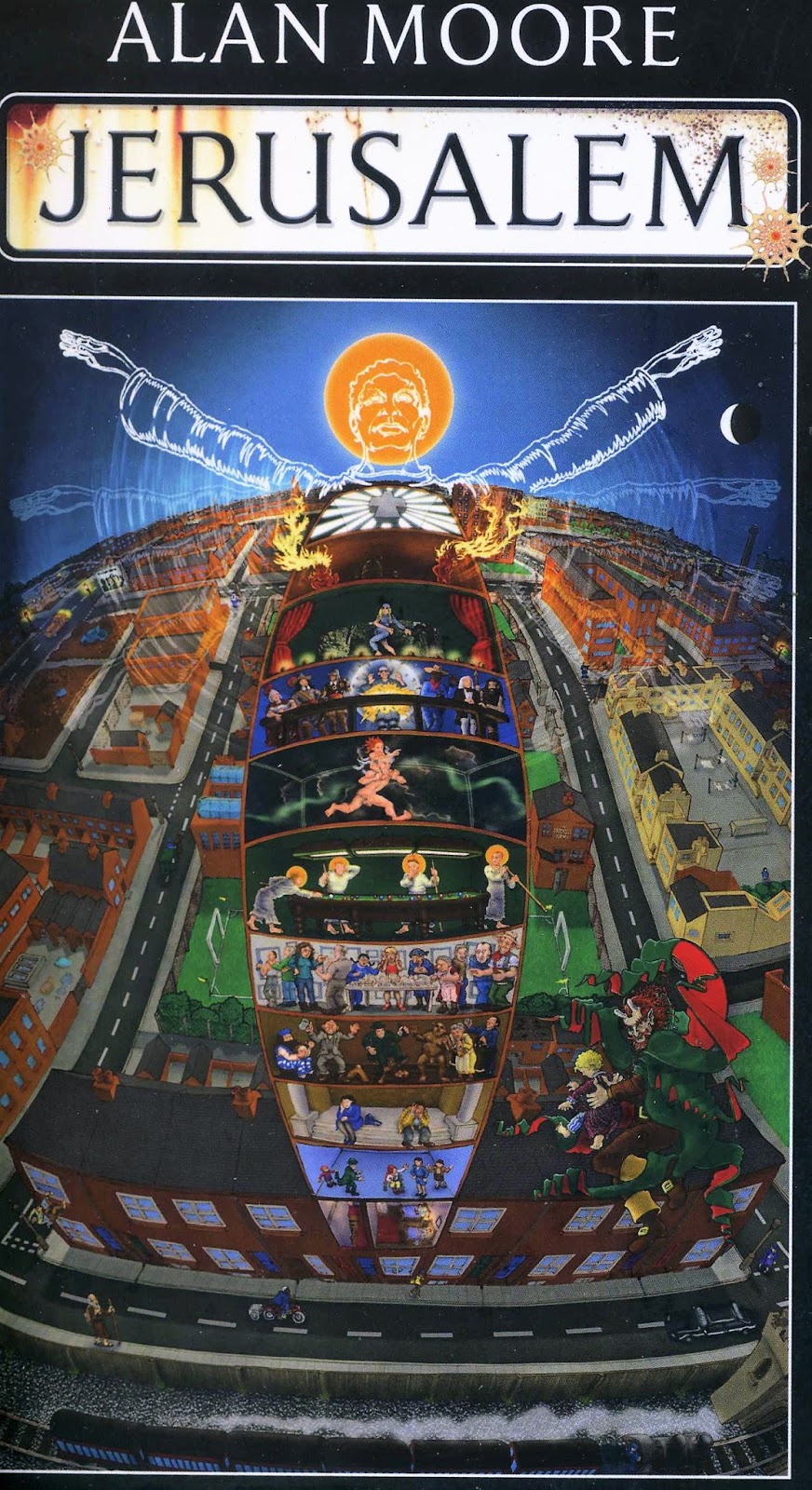 such rich centers of possibilities and meanings

There is of course no other way this could end, which is fitting given that one of the (many) things Jerusalem is about is predestination. Moore’s vision of the world is closely related to the one we’ve been exhaustively exploring throughout this series. He does not actually use the word hypercube (and indeed envisions the structure in even higher dimensions), but it’s nevertheless clearly what’s going on. And though it would be wrong to describe it as a prison (he’s ultimately too optimistic for that), the multidimensional superstructure in which he places us is nevertheless utterly inescapable. As Moore imagines it, reality is a fixed solid existing in at least four dimensions, in which all events are fixed, and human consciousnesses simply experience their lives on endless repeat, passing through their allotted portion of the structure over and over again, experiencing the same unchanging lives each time.

This poses several problems, of which the loss of free will is only one, and a fairly minor one at that. Some are acknowledged by Moore, either within Jerusalem itself or in interviews, most notably the apparent loss of any moral perspective. Moore, being a monstrously intelligent man, anticipates these, emphasizing the sacredness of consciousness and the way that it imposes morality and aesthetics upon the world, and for the most part this works. Certainly there’s a flat truth to it: whatever the overall cosmological structure of reality (or even just history) may be, we are in the end pinned to linearly experienced consciousness, and in a way that means that our perception of morality is all-encompassing. Moore unfolds this with moving humanity, suggesting that we are ourselves harsher moral judges than any external force could ever be, but the point stands as a simple, stark description of how the world works: in the end, we are alone with our experience of it and left to make of that what we will.

Within the novel, of course, this is a cheat, albeit a fairly well-earned one. The narrative perspective shifts among two dozen or so characters in the course of the telling, but they are all in the end Moore’s perspective upon Moore’s world, a fact all but explicitly acknowledged by Moore’s blatant avatar within the work, an artist working on an installation about the working class Northampton neighborhood she lives in that consists of thirty-five works corresponding precisely to the novel’s thirty-five chapters. And the larger cosmology of the novel tacitly acknowledges this cheat: in fact there is an afterlife that one can retire to when one is tired of repeating one’s life, consisting of existence in the higher realm of Mansoul in which the four-dimensional solid of reality can be observed from above, and where the immortal souls appear to have free will and the ability to die. And there are several points where it’s noted that there’s a level above Mansoul on which the pattern repeats, occupied by a singular architect that Moore has been perfectly willing to suggest is him all along, typically via a long and deadpan interview routine in which he discusses the idea of simulationism before noting that the designer would probably incarnate himself in the simulation, and that most portrayals of God are of an older man with a long beard before trailing off pointedly.

And so, inevitably, Jerusalem displays the limitations of that perspective. Most notably, it can be described without complete inaccuracy as a 1266-page explanation of why a particular woman really needed to be raped in a particular carpark on a particular night. He as a fairly good reason as such things go (it’s central to her becoming a crucial life-saving figure in the climate-spurred refugee crisis of the mid-21st century), but it’s still Alan Moore writing the exact sort of apologia for rape one always hoped he’d be wise enough not to. But, of course, the limitations of perspective are part of the point, and for all the intricate geometries of Moore’s construction there is no sense that he wishes to have the last word on creation. Jerusalem never announces itself as a solution to the problem of history’s terminal progression, and indeed, in the novel’s most strikingly evocative chapter, goes to great length to emphasize the sheer fragility of humanity with an exploration of the future that fades into post-humanity almost immediately and lingers there fascinatingly before ending life entirely. It is explicitly not a novel about escape, least of all from its own imperfections.

What is it, then? First and foremost, it is a diagnosis of a broken history. Its central metaphor is the Destructor, a waste incinerator constructed in the middle of the Boroughs across the turn of the 19th to 20th centuries that Moore reinterprets as the destructive process that simply eliminates that which history and society have no further use for. Moore ties this structure inexorably to a pair of high-rises constructed a block away in the middle of the 20th century, and in turn to the destruction of the church in which a cross carried all the way from Jerusalem resided, marking the spiritual center of England itself. A condemnation, then, of modernism’s most destructive instincts – of its obsession with making it new by first bulldozing everything that came before. And yet even this is bound up in a carefully managed irony: Jerusalem is, after all, a self-consciously modernist novel – in all likelihood the last great work of modernism, delivered a century after the movement’s height. Moore’s revulsion at modernism’s pyromaniacal tendencies is evident, and yet as ever he is a willing part of it, making no effort to escape the fatal current.

Instead he creates what not so much a post-modernism, or even a neo-modernism, but rather a modernism of rescue – one whose sense of newness is not as something built over the trampled ruins of the past but rather as a means of preservation. He cops to this in the novel’s closing moments when he has the stand-in for his brother ask Alma Warren whether her art project has saved the Boroughs, she explains that she’s done so, “but not how you save the whale or save the National Health Service. I’ve saved it the way that you save ships in bottles. It’s the only plan that works. Sooner or later all the people and the places that we loved are finished, and the only way to keep them save is art. That’s what art’s for. It rescues everything from time.” But wait – Moore’s entire point has been that time doesn’t lose things in the first place – that everything is preserved in perfect wholeness, just displaced into the past or future. How, then, is his artistic rescue needed in the first place? What is there to rescue when everything is eternal?

For Moore, of course, the answer is “magic,” though for our purposes we might as well call it witchcraft. This equation is not an entirely straightforward one – Moore, after all, has a highly idiosyncratic definition of magic that is essentially coextensive with art, and which has little obvious relationship with witchcraft as we understand it. But closer inspection reveals more similarities than differences. In this regard it’s worth looking to Moore’s more recent definition of magic as the transformation of consciousness, a view that begins to make everything slot into place nicely. If consciousness is what brings meaning and significance to events, then what art preserves isn’t things so much as individual experiences of them, and, with it, all that makes a thing important in the first place.

It is Moore’s cosmology of eternalism, however, that really gives this view power. If every single detail of every single object is perfectly preserved in time and continually experienced, art’s power becomes precisely that of witchcraft: it is a way to conjure lost and buried things out of their time. And, like witchcraft, there is an infinite bounty of such things – a limitless vista of secret histories bound in every tiny detail of the world. And in the spirit of witchcraft, Moore exploits this fact to bring forth the suppressed histories of the world, focusing not on race or gender (though he acknowledges both) but on class, creating a mythic version of his home city that exists in the forgotten lives of the poor.

This is in and of itself a magnificent achievement, as one would hope from the career capstone work of one of the great writers of his era. But the monolith that is Jerusalem itself is in many ways the least of its achievements. The point is not the ingenious case Moore makes for the shithole part of Northampton in which he grew up’s importance, but the case he makes for doing the same for every other ruin left by history’s progression. No, there’s not an escape from history. There never was. There’s likely not even a future. But every wound and scar inflicted upon the world is a site upon which we can build a vast and marvelous structure. The trick has never been to build high, but rather to build deep; not towers but tunnels, or better yet, roots sent deep into the soil of eternity where they can bloom in secret and perfect beauty.