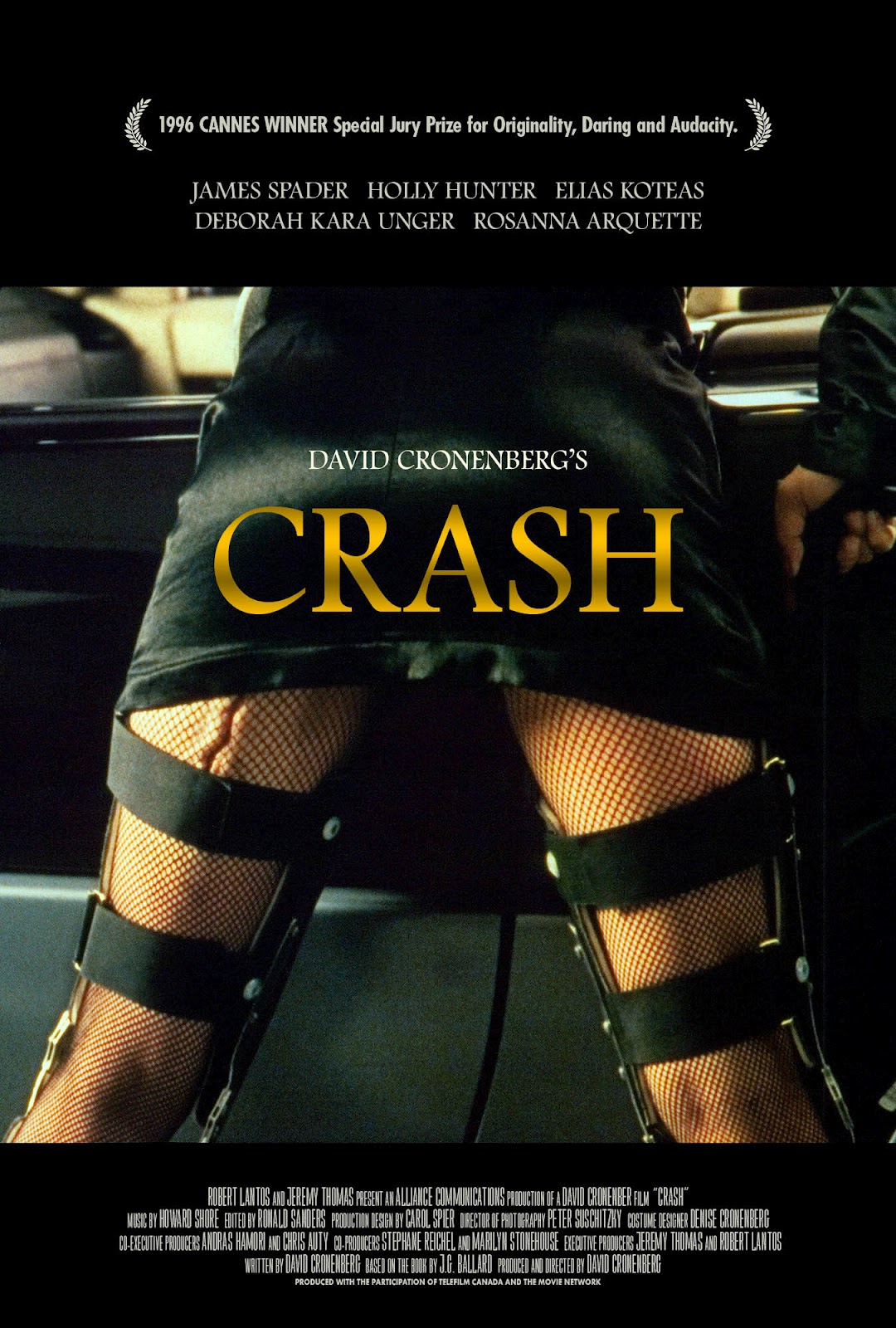 Within the biotemporal omnipresence of the hypercube escape must be understood as an exit wound. In practice, this would manifest itself as an area towards which the natural flows towards annihilation congregate – the eddies along the surface where narrative tracks converge, scar tissue forming anticipatorily around the site of injury. Counterintuitively, then, a weak point is going to appear as the thickest part of the skin.

Crash, then – first of Ballard’s three attempts at sci-fi without futurity, the book is a famously scandalous meditation on the eroticism of the car crash. Its film adaptation, in 1996, is suspended neatly at the halfway point between the twin towers of the Ballard and Wheatley/Jump High-Rises, and circles neatly around other touchstones. It’s directed by David Cronenberg, for instance, whose 1975 film Shivers saw him independently arriving at the concept of a modernist apartment complex descending into madness, albeit because of genetically engineered parasites who drive their hosts mad with lust as opposed to because of some inherent property of modernity. Its opening sequence – a slow tracking shot through an aircraft hanger, across the sleek bodies of airplanes, fragmented like a female body beneath the male gaze, until finally, in the middle distance, a woman undressing enters the frame and, as we move to close-up, exposes her nipple and lays it seductively upon the body of the aircraft, which she proceeds to relate to more closely and intimately than the lover who subsequently takes her from behind – draws a crucial link between the sexuality of cars and one of Le Corbusier’s other defining aesthetic obsessions, the airplane.

This connection is more subdued in the novel, but still present: Ballard’s wife (the main character is named after himself) is sleeping with a pilot and taking flying lessons, and Ballard has occasional descriptions like “even the giant aircraft taking off from the airport were systems of excitement and eroticism, punishment and desire waiting to be inflicted on my body.” The connection between cars and planes is hardly an unexpected one requiring reference to Le Corbusier, but the link is nevertheless generative. Le Corubusier’s aestheticization of mechanical functionality creates a tightly wound feedback loop that Ballard efficiently short-circuits. As Le Corbusier puts it, talking about cars, “through the relentless competition of the countless firms that build them, each has found itself under obligation to dominate the competition, and, on top of the standard for realized practical things, there has intervened a search for perfection and harmony outside of brute practical fact, a manifestation not only of perfection and harmony, but of beauty.” In other words, the mechanistic efficiency of cars naturally leads to the emergence of beauty, to which Ballard, quite sensibly, sets about trying to fuck.

The cold detachment that characterizes Laing is obviously a big part of this, but what Crash foregrounds that High-Rise does not is the eroticization of this clinicism, as evidenced by his description of a fantasy of “the dying chromium and collapsing bulkheads of their two cars meeting head-on in complex collisions endlessly repeated in slow-motion films, by the identical wounds inflicted on their bodies, by the image of windshield glass frosting around her face as she broke its tinted surface like a death-born Aphrodite, by the compound fractures of their thighs impacted against their handbreake mountings, and above all by the wounds to their genitalia, her uterus pierced by the heraldic beak of the manufacturer’s medallion, his semen emptying across the luminescent dials that registered forever the last temperature and fuel levels of the engine.” Like the sleek efficiencies of Le Corbusier’s mechanistic cities, it is a sexual perversion borne of minute particulars, its details all precisely fixed and calculated. Indeed, over the (frankly tedious) span of the book Ballard’s endless reconfigurations of the same basic fetishistic elements come to resemble nothing so much as Le Corbusier’s array of mass-produced options for shelving in your shining new home-machine.

The style is one Ballard pioneered in The Atrocity Exhibition, the book with which he transitioned from his matched apocalypse quartet into the Crash-Concrete Island-High-Rise triptych. (Indeed, the beginnings of the books actively parallel each other, with Crash focusing heavily on the way in which Vaughan, the crazed psychopomp who introduces Ballard to the limitless depths of autoeroticism and whose death is announced in the novel’s first sentence, imagines the death of Elizabeth Taylor, while The Atrocity Exhibition’s first chapter repeatedly returns to the central but indefinite role of Taylor within Travis’s imagined World War III, which to him “represents the final self-destruction and mbalance of an asymmetric world. The human organism is an atrocity exhibition at which he is an unwilling spectator…”)  It is not quite a novel – rather it collects a series of short pieces he did in similar styles that he described as “condensed novels.” This style, in turn, consisted of a series of single-paragraph chapters with appropriate headings, so for instance, the second piece, “The Unviersity of Death,” is divided into chapters The Conceptual Death, Auto-erotic, Obscene Mannequin, Left Orbit and Temple, A Sophisticated Experiment, A Shabby Voyeur, The Image Maze, Spinal Levels, Towards the D.M.Z., Mimetized Disasters, No U-Turn, The Persistence of Memory, Arrival at the Zone, The Plaza, The Annunciation, The Geometry of Her Face, Transliterated Pudenda, Journeys to an Interior, Stochastic Analysis, Crash Magazine, A Cosmetic Problem, The Sixty Minute Zoom, A Question of Definition, The Unidentified Female Orifice, The Optimum Would Profile, the Impact Zone, Talbot: False Deaths, Unusual Poses, In Death, Yes, Idiosyncrasies and SIn-crazed Idioms, Speed Trials, The Acceleration Couch, Celebration, Interlocked Bodies, The Helicopters are Burning, and Fractured Smile. This format of strange lists continues within the paragraphs, which generally describe the depravities imagined by the shifting protagonists of the piece (Travis, Talbot, Traven, Tallis, Trabert, Talbert, Travers, and the second coming of Christ) in quasi-clinical terms, often specifically in the format of lists, as with Journeys to an Interior, which describes how while “waiting in Karen Novotny’s apartment, Talbot made certain transits: (1) Spinal: ‘The Eye of Silence’ – these porous rock towers, with the luminosity of exposed organs, contained an immense planetary silence. Moving across the iodine water of these corroded lagoons, Talbot followed the solitary nymph through the causeway of rock, the palaces of his own flesh and bone. (2) Media: montage landscapes of war – webbing heaped in pits beside the Shanghai-Nanking railway; bargirls’ cabins built out of tires and fuel drums; dead Japanese stacked like firewood in L.C.T.s off Woosung pier. (3) Contour: the unique parameters of Karen’s body – beckoning vents of mouth and vulva, the soft hypogeum of the anus. (4) Astral: segments of his posture mimetized in the processions of space. These transits contained an image of the geometry assembling itself in the musculature of the young woman, in their postures during interocurse, in the angles between the walls of the apartment.” Note in particular the way that the media and contour sections are themselves constructed as lists.

What distinguishes The Atrocity Exhibition from Crash, however, is that the latter explores a single perversion in thorough depth, obsessively picking at a single scab, whereas the former is a wide-ranging exploration of perversions, mixing and matching concepts and iconography. Common tropes recur – wounds, military weapons, bodily orifices, celebrities, assassination, cars, and war footage, for instance. But the aim is not depth, but rather an attempt to chart the entire territory of this post-Corbusian sexuality. This goal is implicit in his endless lists, which he generated by free association, a deliberately unbounded generative process.

The purpose of this is straightforward – as Ballard says in one of his most famous quotes, “I would sum up my fear of the future in one word: boring.” And as he puts it in a 1984 interview, clarifying the line, “it’s possible that my children and yours will live in an eventless world, and that the faculty of imagination will die, or express itself solely in the realm of psychopathology. In Atrocity Exhibition I make the point that perhaps psychopathology should be kept alive as a repository, probably the last repository, of the imagination.” It is possible, in other words, to read The Atrocity Exhibition as a map of the hypercube’s immediate exterior – a meticulous diagram of the positions that are both highly adjacent to and decisively unthinkable within its fatal bounds.

In contrast, then, Crash emerges as precisely what we expected: a furious attempt to burrow through, with all of Ballard’s gaze directed at a single point. And at this point it becomes obvious to turn to the exact nature of this attempt: the car crash. Point of impact as point of impact. It is first and foremost a point of rupture; a moment where the standard function of systems abruptly ceases, replaced with something primal and traumatic. Equally, however, it is an irreducible part of the very systems it breaks. There is no way to send millions of two-ton human-piloted bullets around closed tracks at high speeds and not have crashes. Even Le Corbusier would surely admit that. Beyond that, it is singularly located in both space and time – an instant in which the engineered order of things is punctured.

Ballard stays true to this, keeping his descriptions of the actual moments of car crashes relatively short. The crash that initiates Ballard’s contact with Vaughan is described in a couple of dispassionate sentences. They are detailed, to be sure – Ballard boasts that he recalls the details of the other cars involved “with the painful accuracy of a never-to-be-eluded nightmare” (although the narration does not name makes and models save for Vaughan’s Lincoln) – but there’s none of the expansively diagnostic accounting that there is over the course of the next few paragraphs, such as when he goes into the minute details of the dead body on his car bonnet. Cronenberg approaches the matter similarly, shooting the car crashes straightforwardly and without any slow motion or distortion, letting them play out in real and naturalistic time. They approach with grim inevitability and buildup, but they simply happen and are past. By the film’s end, they are not even seen – both the fatal crash of Elias Koteas’s Vaughan and the final crash in which Deborah Kara Unger’s Catherine goes careening off the highway stick to Ballard’s perspective, embodied in the perfect casting of James Spader, while the wrecked cars go flying off camera, the crashes heard but not seen.

In both book and film the practical result of this is a fascination with wreckage. With the orgasmic moment of collision unavailable (or at least unsustainable), the desire refocuses on the literal fetishes. The fascination with photographing accident scenes, for instance, or with “crash cars,” or, most vividly, the novel’s obsession with smearing bodily fluids, particularly semen, over cars, such as Ballard’s final and ritual marking of the car in which Vaughan died. And it is here that the frailties of Crash’s approach become evident. For all its transgressive potential, it is in the end not two tons of metal fracturing the walls of the modernist hypercube into jagged shards; it’s just an old scar marking a wound that’s long since healed over. Perhaps once upon a time it was an escape route. Certainly the history of counterculture in the latter half of the twentieth century suggests that. But if so, whatever portal it opened has been bolted shut, and any fugitives who fled through it are long since gone. Sometimes a scar is just a scar. Maybe next time.