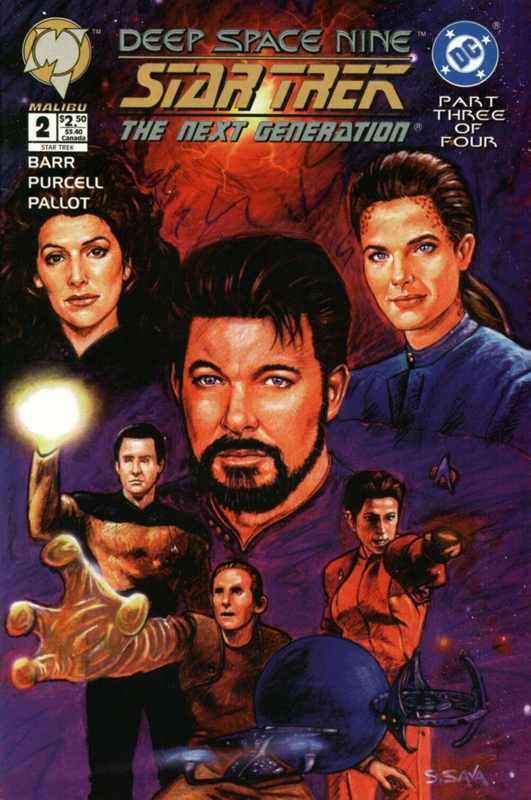 Commander Riker orders the ship to turn around immediately, but of course we can’t do that. If they go back through the Wormhole too quickly, the circuitry that allowed the Runabout safe passage in the first place might be damaged. So Will thinks fast, has the crew divert all power to shields and beam over to the other Runabout (the one that carried the admirals’ party). This shouldn’t be possible because transporters famously can’t penetrate shields, but whatever. And naturally, this plan doesn’t work either as the Evil Aliens soon catch onto it and beam everyone aboard themselves in a stasis field. Because captures and escapes are just how serials work.

So after that bit of padding, we get some exposition. Because, again, serials. These Aliens, hereafter the titular Othersiders, explain to the team that they are pissed off at people from the Alpha Quadrant intruding on space they claim is theirs, and they’re determined to strike back. Back on our side, Captain Picard suggests that he and Commander Sisko pass the time waiting for word from the away team by helping out with a humanitarian mission on Bajor. Because this team can’t have the DS9 commander appear too competent or confident, an anxious and uncertain Sisko asks if that’s wise, but eventually comes around to the idea. In the infirmary, Doctor Bashir is still trying to ask Doctor Crusher out, but he stresses he only wanted to ask her for help about what to say to Jadzia Dax, given Beverly’s prior experience with Trills. Julian tries to dance out of it, of course, playing it up that Beverly was attracted to him, but she just snarks and rolls her eyes.

On the Promenade, Miles O’Brien is worried about everyone on Bajor. Keiko thinks Miles should ask for a transfer back to the Enterprise, and Miles says he’ll do it for her and Molly. But Keiko thought Miles wanted to go back because he wasn’t happy working on Deep Space 9; Miles counters that he’s never been happier in his life because of the challenge. As they reconcile, this makes Quark happy, because in his experience “young people in love” always spend money freely. On Bajor, Vedek Bariel meets with Commander Sisko and Captain Picard, asking Ben if he’s heard from the away team, specifically Nerys, while Doctors Crusher and Bashir tend to the Bajoran sick and wounded. After, Picard and Sisko offer to help Worf lift some sandbags to build a flood barrier. The two COs playfully tease each other about manual labour, but then Worf dives into an overflowing river to rescue a child caught in the floodwaters. Captain Picard has Geordi, in command of the Enterprise once again, to beam Worf up immediately, then use a phaser blast to stem the flood…somehow. Now I personally think this is something Geordi probably could have monitored and resolved himself without being told to do so…and the very next panel shows Worf and the kid back on Bajor. So that makes sense.

Back in the Gamma Quadrant (more specifically, a holding cell, very familiar territory for our heroes by this point) Riker and Dax question Commander Troi about her impressions in regards to their captors. Riker and Kira squabble some more, while on the outside a fly irritates one of the jailers. The fly is, of course, Odo, who returns to humanoid shape and punches his daylights out. Odo wasn’t affected by the stasis field because he doesn’t have a nervous system and uses the hand of the unconscious guard to open the cell. He seems more interested, however, in the foodstuff smeared over the jailer’s mouth (and you’re never gonna believe how this comes into play). Riker and Kira fight some more about priorities (Riker wants to rescue the admirals, Kira wants to stabilize the Wormhole) before Dax mercifully shuts them up. She offers that it’s possible to accomplish both, to which Riker responds by doing his best Freddie Jones impression and telling them to all “Split Up, Gang”. Deanna is the only person to voice the sane point of view, that is, which would be that this never goes well.

But they do anyway, and the away team branches off in two directions. Odo, Data and Deanna are now alone, and the three make small talk about Odo’s remarkable shapeshifting ability, his desire to find a “creator” of his own and his affectionate nickname of “constable”. Soon though they run into some guards, but Odo morphs into one of the Othersiders to get everyone by in time for Data and Deanna to blast them in the fucking face with plasma rifles. Meanwhile, Riker and Kira are amazingly still arguing, leaving Dax to do all of the actual productive things by opening up an air vent to allow the team passage into “the main facility”. Jadzia takes the opportunity to hit on Commander Riker, who is pleasantly surprised and delighted to finally meet someone as charming and quick-witted as he is. Kira is left dumbfounded and speechless. But before we get any more actually interesting character parallels, it’s time to fuck some shit up in the control room. Dax reverses the polarity of some technobabble causing the stasis field weapon to reverse, affecting the Othersiders instead of the away team. Naturally, this causes a huge explosion.

Meanwhile, Odo, Deanna and Data have found the admirals, but it’s too late, because of course it’s too late. The main admiral tries to warn Deanna of the obvious trap, and gets shot in the back for his trouble. The Othersiders, of course, have the team surrounded.

My…enthusiasm for this issue probably betrays the fact that this is the second Malibu contribution to the team-up miniseries. “Encounter with the Othersiders” is slightly better then Mike W. Barr’s previous effort in some ways, but in other ways it’s significantly worse. I’m going to avoid picking at that too much this time, though: This is actually the last time we’re going to be seeing Mike W. Barr in this project, and as we begin to wind down the comics section of this book we’re going to have to start saying goodbye to people and concepts we’ve journeyed with for quite some time. Frankly, I don’t want to leave things on an entirely sour note, and anyway, Michael Jan Friedman is back next month so there’s still hope for this miniseries.

Yes, the dialogue is wooden as a tree stump. Yes, the characterization is wrong again, except in the odd cases where Barr actually seems to genuinely get somebody (again, Dax and Odo). And yes, the plot is an excruciatingly tedious series of by-the-book adventure serial captures and escapes, punctuated by the occasional flat action setpiece. But this has been a hallmark of Barr’s writing from day one, going as far back as that Star Trek II: The Wrath of Khan sequel series he penned for DC in the early 80s. Flashes of brilliance in the early Malibu Star Trek: Deep Space Nine line did not meaningfully change this. Frankly, the worst thing about this issue is the rampant plot holes: There are seriously moments that literally decohere because the progression of the narrative panel-to-panel actually makes no sense, and Barr genuinely dropped the ball in this case. But the takeaway here has to be that Barr is a functional serializer who occasionally gets bum deals: Star Trek may not be his forte, but I’ve seen way, way worse.

Worth spending some more time thinking about is the notion of the Othersiders, a hostile faction of expansionist Gamma Quadrant natives who resent the free travel between the two ends of the galaxy offered by the Bajoran Wormhole as an incursion into their territory. Obviously this story isn’t over yet so we can’t fully infer a reading out of them just yet, but the concept itself is worth a momentary consideration. There was, at the time this story was being written, some debate within the writer’s room of the Star Trek TV series about what to do with the Gamma Quadrant. There was a strain of thought that the Gamma Quadrant is of no use to writers left as an unknown to be explored, and should instead be defined somehow. One of the ideas being tossed around was an “Evil Federation” of sorts; a gigantic Empire that ruled the Gamma Quadrant with an iron fist that would eventually come to blows with our own.

So the Othersiders are, at this point, an interesting thought experiment about what that might have looked like on Star Trek: Deep Space Nine. And it does give us one admittedly pretty memorable moment when, after being abducted by the Othersiders (for the first time, that is), Dax, Riker and Deanna give their usual spiel about bring explorers, declaring that “our intentions are peaceful!”, to which one of the lead Othersiders gives the flat response “ours are not”. It’s rote and hokey, but gets the point across succinctly. However that said, an evil group of mustache-twirling imperialists is, notably, considerably less interesting that what’s been done with the Gamma Quadrant to date, especially in Mark A. Altman’s work. Hearts and Minds gave us a huge galactic stage against the backdrop of which all sorts of different powers jockeyed for position and vied for their own particular interests, all while emulating that feeling of discovery when travelling to a new place for the first time. Giant fuck-off space armada doesn’t do that so much.

What is sort of amusing about the setup in Star Trek: Deep Space Nine The Next Generation though is how this concept, which the TV series is toying with introducing as a legitimately unironic Big Bad, is here wheeled in basically as a storytelling excuse to put the Bajoran Wormhole in danger, necessitating the team-up. And (Spoiler Alert!) it’s going to end up being subverted next month anyway, much like a lot of this series’ assumed plot points and conventions. The comic book is still not only one step, but several yards ahead of the TV production, and is destined for far greater things. More on that next time though.

L.I. Underhill is a media critic and historian specializing in pop culture, with a focus on science fiction (especially Star Trek) and video games. Their projects include a critical history of Star Trek told through the narrative of a war in time, a “heretical” history of The Legend of Zelda series and a literary postmodern reading of Jim Davis' Garfield.
Homecoming Rebel Chic

Leave a Reply to download facetime on pcCancel reply