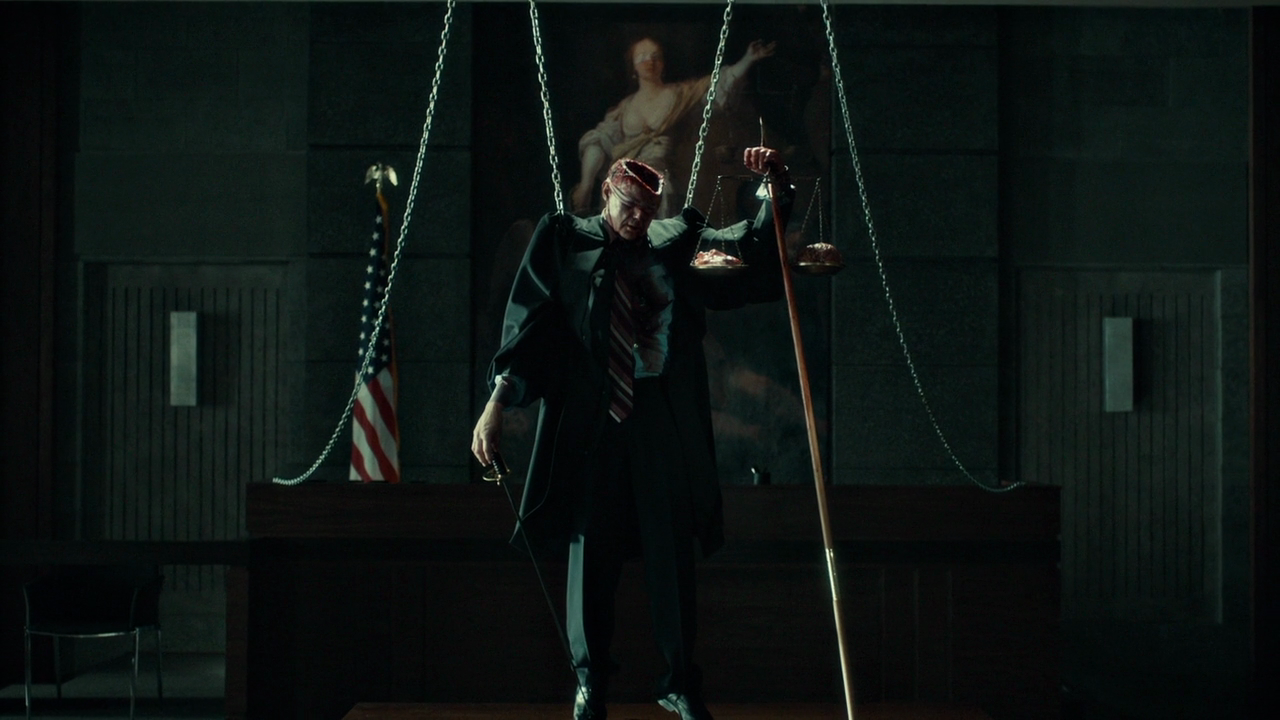 HASSUN: A sushi course with small side dishes that sets a seasonal theme. Janice Poon discusses it in terms of balancing opposites, which could be made related to the weighing of guilt and innocence involved in a trial with relatively little critical legerdemain. 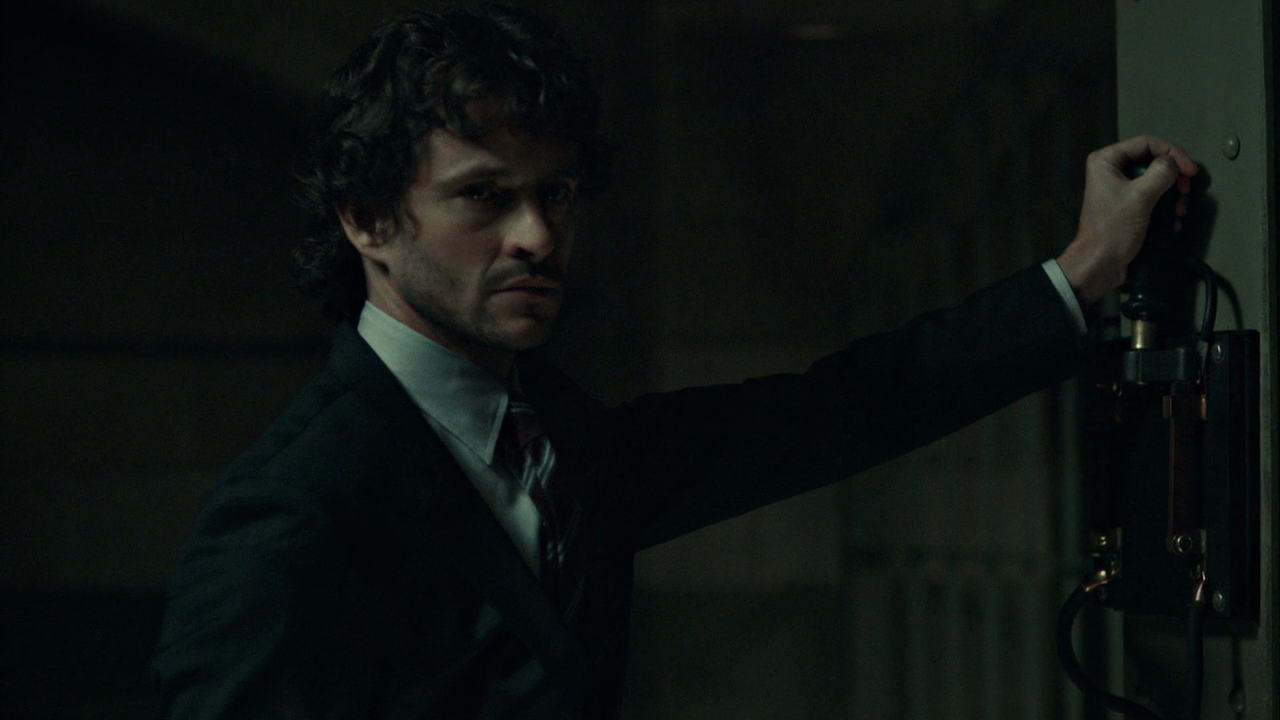 A bewildering and suggestive opening image as Will is shown imagining his own execution from the perspective of the executioner. This is an entirely plausible thing for Will to do – indeed the idea that Will would actively try to empathize with his potential executioner is really interesting. But its substance is in practice merely “unsettling cold open,” the impact of the image left entirely for the viewer instead of the narrative. In one sense this is emblematic of the episode, which is very much the season’s “Œuf.” It’s actively identified by Fuller as the weak link, and sees the show attempting its spin on courtroom drama instead of police procedural, only to find that the move to the second half of Law and Order is a step further than the forced perspective brilliance of its iconography can sustain. 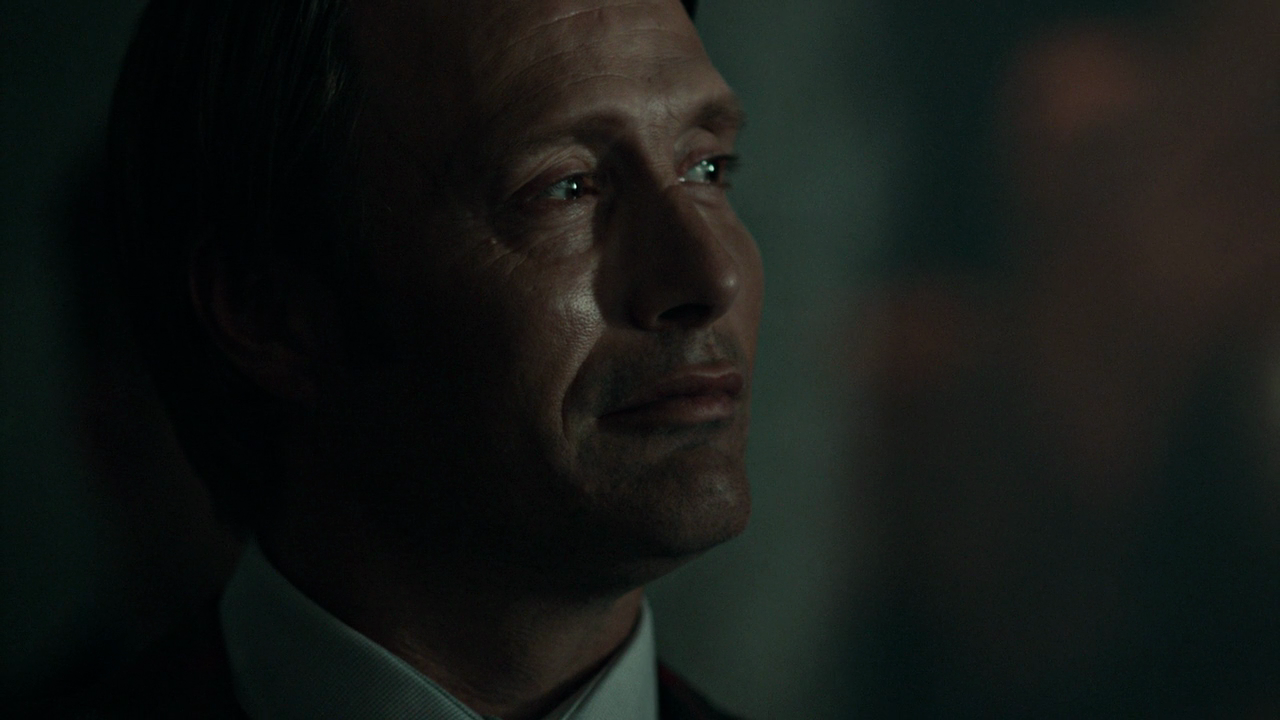 This smirk off the line where the prosecutor asserts that Will is the smartest person in the courtroom is interesting; its most superficial reading is standard issue “Hannibal gloating about how clever he is,” and yet given the depth of his investment in Will’s development it’s equally likely that this is a smile of genuine satisfaction that his friend is finally getting the critical reception he deserves.

JACK CRAWFORD: My instincts have not yet arrived at conviction.
KADE PRURNELL: Mine have. With the benefit of no prior involvement and no personal connections to the accused.
JACK CRAWFORD: Meaning, I can’t be impartial.
KADE PRURNELL: Of course you can be impartial. But right now, you’re not. You have to believe something. As long as there is reason and evidence to believe. You have reason. You have evidence.

It’s interesting that Prurnell’s case here frames belief as a moral obligation as opposed to a logical consequence. She is, after all, presumably not saying that all things there is both evidence for and some reason to believe are true. Rather, she is suggesting that an FBI agent has a duty to believe in these circumstances that Jack is being lax in. For all his faults, even Jack ain’t buying that bullshit.

JACK CRAWFORD: He can think like anybody. He has pure empathy and projection. He can imprint profiles on the blank slate of his mind for us to read.
MARION VEGA: Sounds like a supervillain.

Transparently untrue; a supervillain with such a thoroughly non-offensive power would be an extremely bizarre idea. A power like this is far more suited to a superhero, or, better yet, the troubled protagonist of some overly pompous post-House cop drama. Which is to say that perhaps genre-based narratology is not a great alley for Hannibal to wander down.

HANNIBAL: Tell me, Jack. Was your testimony meant to be a resignation?
JACK CRAWFORD: Something very appealing about walking away from all the noise. I’m content to let the chips fall.
HANNIBAL: The magic door is always attractive. Step through and leave all your burdens behind.

In which Hannibal briefly touches on the central iconography of an altogether different show. Jack’s self-destructive streak, on the other hand, is a new and interesting turn in his character. His willingness to be cavalier with the lives of others in order to get what he wants is well-established, but now he is in effect treating himself like he has Miriam, Will, and Beverly.

JACK CRAWFORD: I’ve been thinking about taking my wife back to Italy. We could live there. Bella could die there.
HANNIBAL: You’re not sick, Jack. You don’t have to go into the ground with her. When Bella is lost to you, the FBI could still be there.
JACK CRAWFORD: You’re telling me not to commit professional suicide?
HANNIBAL: As a friend, I’m telling you not to force an issue for the short-term emotional satisfaction it can have.

As with basically all conversations Jack and Hannibal have about Bella, Hannibal’s motivations here seem to be a genuine desire to help. Notably (though it’s far from clear at this point in the episode) Hannibal is ultimately on Jack’s side in trying to save Will, and so pulling Jack back from this self-destructive move is counterproductive to him, further strengthening the case that it’s done out of compassion.

JACK CRAWFORD: The timing is deliberate, choreographed to drop the ear at the start of Will’s trial.
HANNIBAL: Such a gift has great significance.
JACK CRAWFORD: A “gift.” From who?
HANNIBAL: Will claimed someone else committed the crimes he’s accused of.
JACK CRAWFORD: He said that someone was you.
HANNIBAL: Perhaps he was half right
BRIAN ZELLER: You gotta be kidding me.

The basic plot of “Hassun” – and part of its unsatisfying nature – is that Hannibal goes on one of his characteristic improvisational streaks when he jumps onto the “frame whoever sent Will the ear” plan to disastrous if ultimately inconsequential ends. In this regard he is unlucky that Zeller is not the sort of person he could confide in and get a needed sanity check.

HANNIBAL: It seems you have an admirer.
WILL GRAHAM: You think someone sent me an ear because they admire me?
HANNIBAL: The boundaries of what’s considered normal are getting narrower. Outside those boundaries, this may be intended as a helpful gesture.
WILL GRAHAM: How far would you go to help me?
HANNIBAL: It hadn’t occurred to me to send you an ear. But I’m grateful and intrigued that someone has.
WILL GRAHAM: Gratitude has a short half-life.

The most astonishing thing about this exchange (and indeed potentially the episode) is Hannibal’s suggestion that the reason the ear fails to clearly communicate admiration to Will is that people are just too narrow-minded these days. This exchange also marks the first point where the episode bothers to flag that Hannibal didn’t do this, an arguable oversight that means the episode’s central tension and mystery fails to come into view quite soon enough.

A rare bit of Alana characterization that actually does follow sensibly from what’s come before with the character, in that Alana’s somewhat callous motivations in dealing with Will were well-established in the first season. And yet collapsing her obvious sexual interest in Will to a mere manifestation of her professional curiosity still feels cheap somehow, perhaps because the revelation that Alana is a far more callous person than the audience is inclined to think does not actually result in her developing in any way. 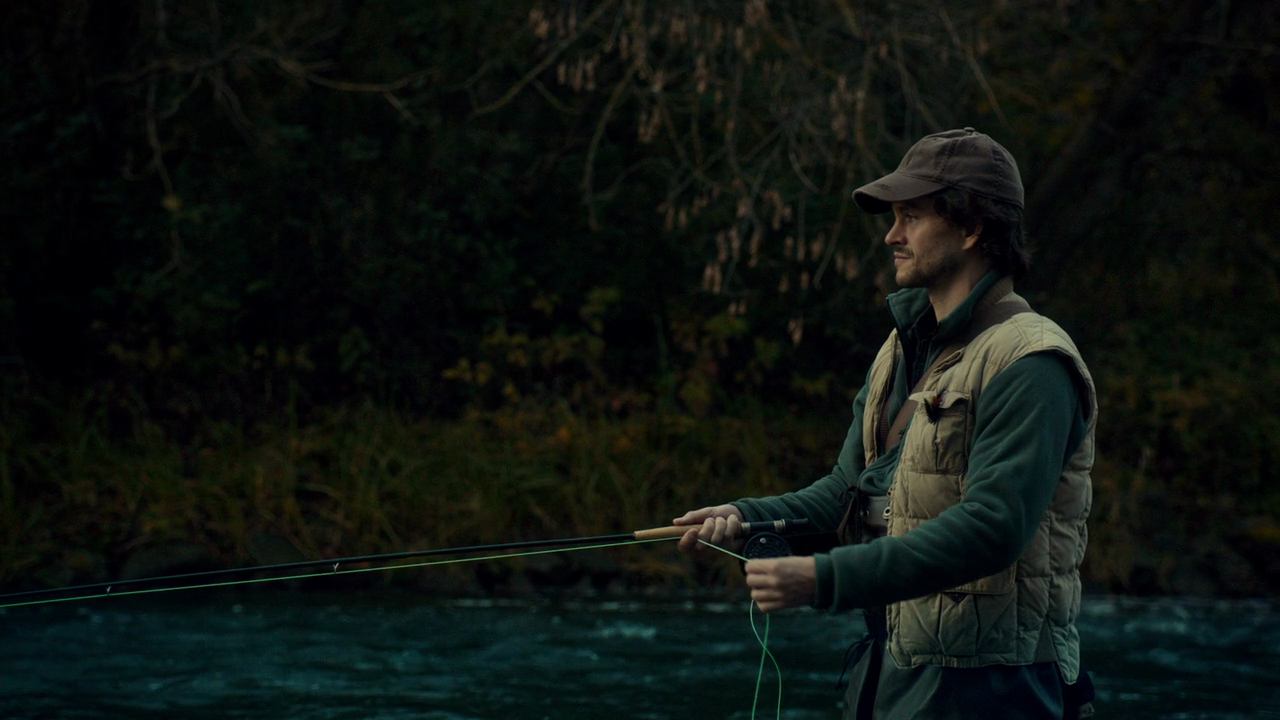 The script does not call for these cuts to Will’s mental world, which call back to Chilton’s interview with him in “Kaiseki.” Their insertion, however, is deeply funny and enlivens what would otherwise be one in an increasingly tedious sequence of scenes in which people talk about Will without anything actually happening per se.

Occam’s broom was coined by the biologist Sydney Brenner, and is accurately described by Graham. Hannibal, meanwhile, is oversignifying more than usual – the context (the ear killer) makes it impossible to read “believe in the best of me” as anything other than Hannibal wanting Will not to think he’s a murderer, and yet Hannibal’s “believe in the best of you” can only be taken to refer to Will’s capacity for murder.

Hannibal apparently takes place in a world where there’s no such thing as pleading in the alternative. 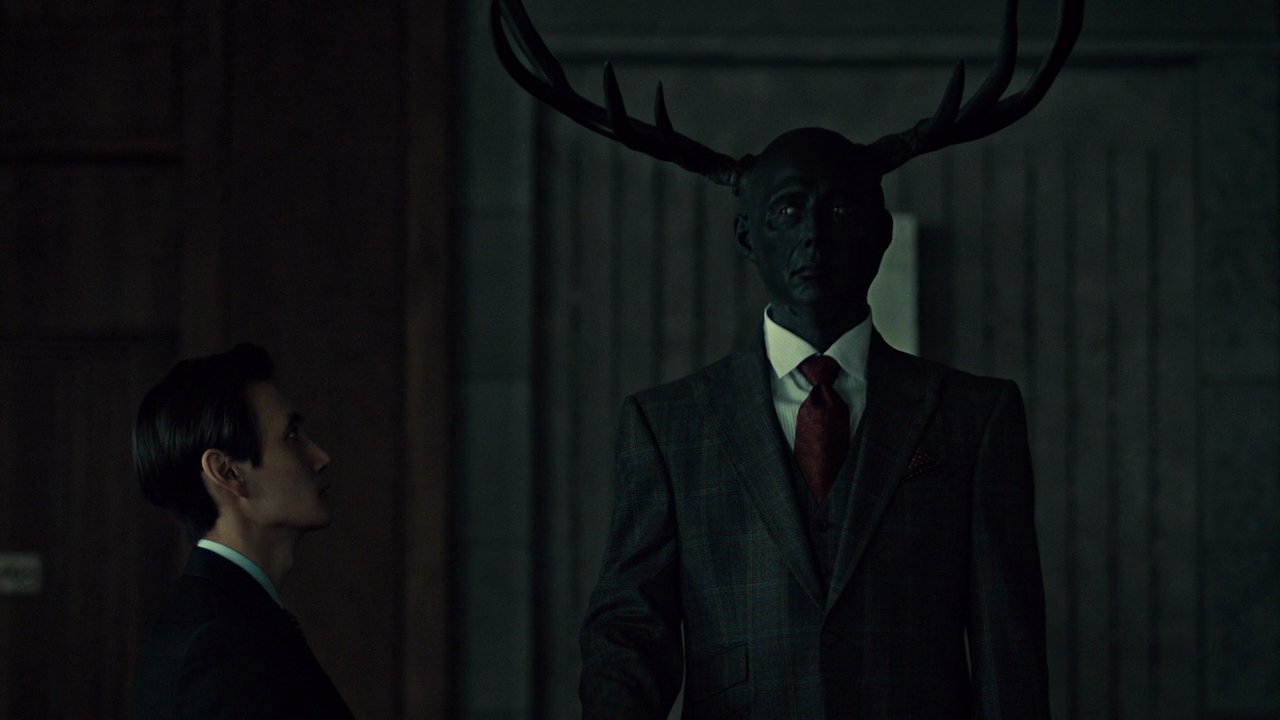 Having come up with the iconography of the Wendigo, the show wisely begins shoving it in all manner of places to see what odd and compelling images result. This is one of the best.

MARION VEGA: Your honor, the witness’s personal beliefs and biases are driving his conclusions. These are clearly two different killers, two different cases. The prejudicial impact outweighs the probative value.
LEONARD BRAUER: There is sufficient similarity to consider this defense on the issue.
JUDGE DAVIES: I’m ruling this defense inadmissable, Mr. Brauer. All previous testimony on the matter will be stricken from the record.

A rather sudden ruling that ends up feeling completely unearned in the context of the episode. Although we, Will, and Hannibal all know that Vega is correct that there are two different killers, the judge doing so with sufficient decisiveness as to rule out the entire line of defense on the basis of no expert testimony save for Hannibal’s (who spoke in favor of the defense) seems excessive.

HANNIBAL: Not only is justice blind, it is mindless and heartless.

Hannibal makes another artist’s statement, though in this case the work would be better suited by being allowed to stand on its own without such an obvious and didactic explanation.

JACK CRAWFORD: I didn’t know how much I wanted this to end, until it didn’t. No verdict. No ending. It starts over. Right from the beginning. Like the trial never happened. Why?
HANNIBAL: Psychopathic violence is predominantly goal-oriented, a means to a very particular end.
JACK CRAWFORD: The killer wanted a mistrial?
HANNIBAL: It’s an elegant, if rather unorthodox, solution.
JACK CRAWFORD: To what?
HANNIBAL: He spared Will a guilty verdict and, for the moment, spared Will’s life.

Given that Hannibal is continuing to issue artist’s statements here, his invocation of motive is interesting, in that this crime is goal-oriented in a way that the bulk of his murders are not.

Will’s line is adapted from Red Dragon, where it originally describes his feelings walking out of his first meeting with Hannibal.

The One Thing I Can’t Seem to Shut Up About: A Commentary on Sol Ikigami: Reflections on Shin Gojira in 2017