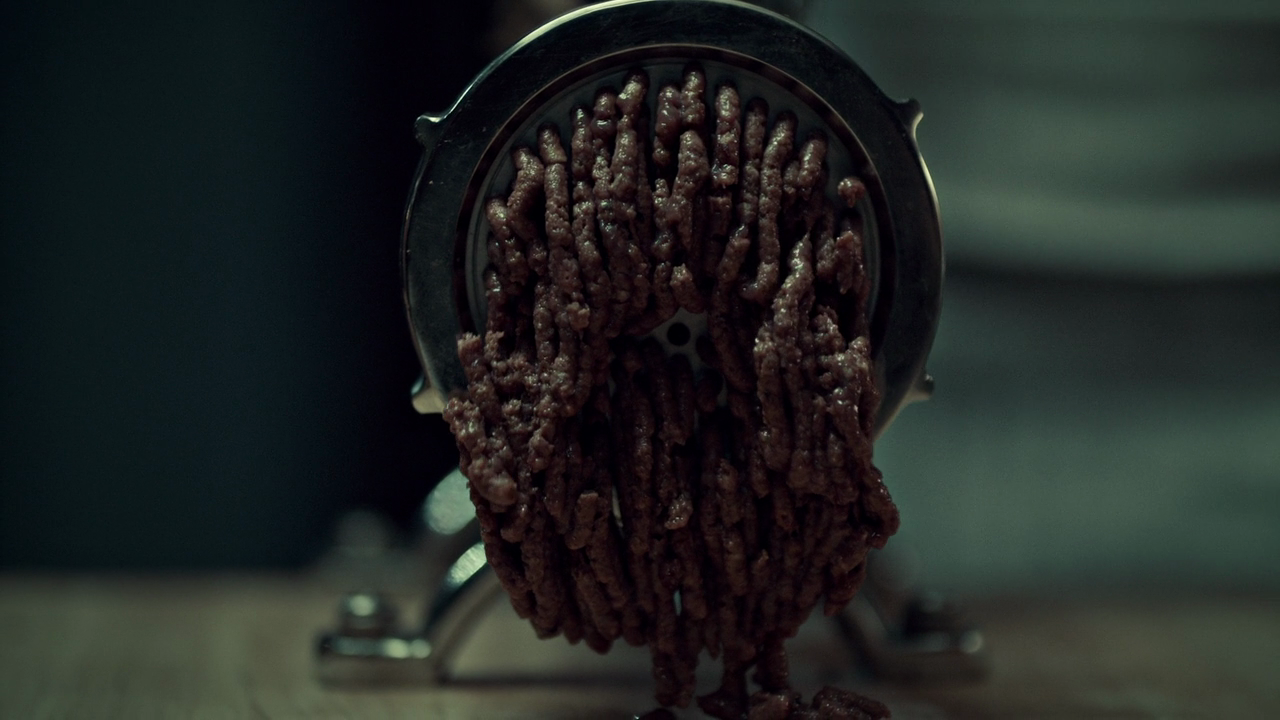 Sorry about the slow posting schedule of late – Jack’s on a brief holiday while he finishes up the Austrian School essay for Neoreaction a Basilisk, and I’m really bad at remembering to queue these on Game of Peaks night. Normal service should resume soon, and your patience is appreciated.

MUKŌZUKE: Literally “set to the far side,” which refers to the dish’s placement on the tray, a small dish of seasonal sashimi. The key detail for our purposes is that the dish is sliced.

FREDDIE LOUNDS: Send someone else, Jack. She’s one of yours.

Freddie is entirely sincere here, offering a genuine concern for Jack. This is not part of some larger heel turn on her part, a fact emphasized by her photographing Beverly’s body and, subsequently, Will in his face mask. Rather, it is out of a sense of genuine horror and, more broadly, a sense of clear morality – the same one that fuels her consistent loyalty to Abigail Hobbs, even after death. The grounds on which Freddie will take actual moral stands are few, but the resulting stands are a key part of her character. 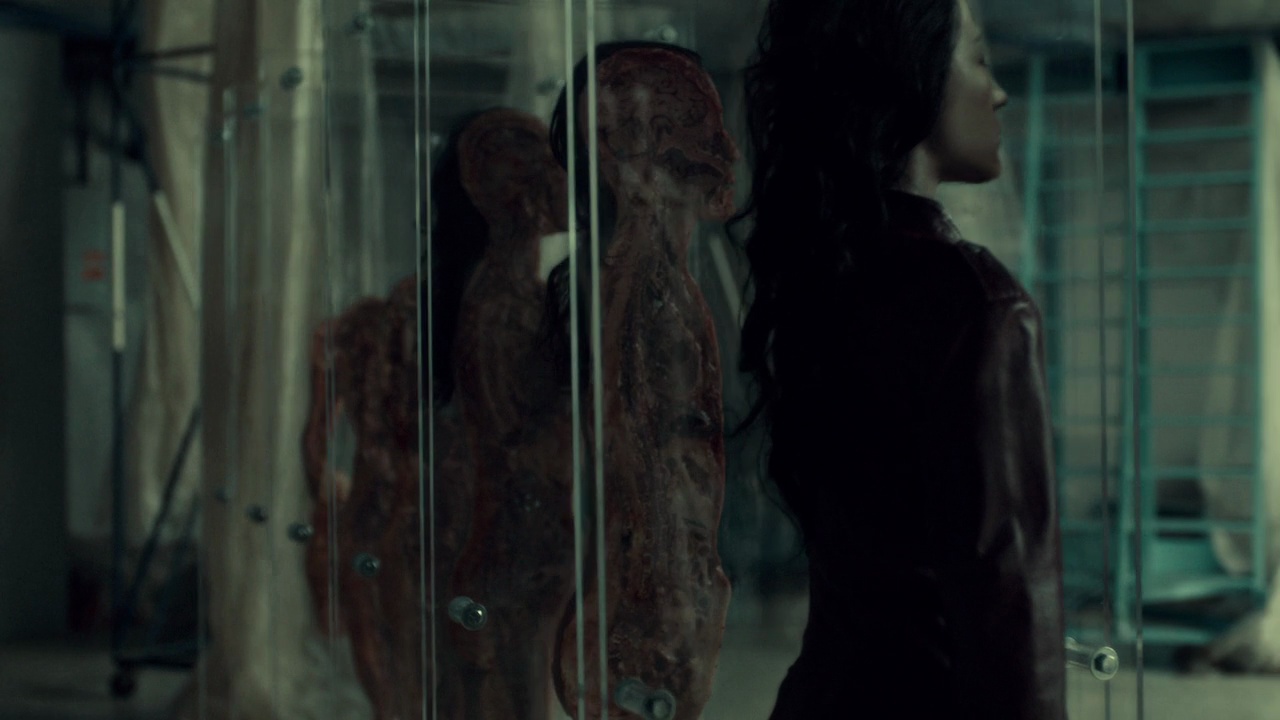 As the saying goes, there’s always doubt until you see a body. This, then, is one of the more emphatic settlings of the matter in television history. In one sense, Beverly is quite literally fridged, or rather freezered, this being a necessary part of displaying her body like this. In most other regards, however, she avoids this trope, although it was actively discussed at the time, with Hettienne Park herself defending the show against accusations of both racism and sexism, pointing out (not unreasonably) that it’s more significant that an Asian woman got cast as a character with the last name “Katz” than that the character was killed off as had been planned since day one. The more substantive observation would be that the key point of fridging is that the character is killed to provide emotional drama for male leads. While Will, Jack, and the other (admittedly mostly male) characters do respond to her death with grief, this is not even the main point of “Mukōzuke.” Beverly’s death matters primarily for the ways in which it changes the state of play for the show, forcing Will to change his tactics and incrementally ratcheting up the inevitability of Jack eventually figuring out what’s actually going on with Hannibal. 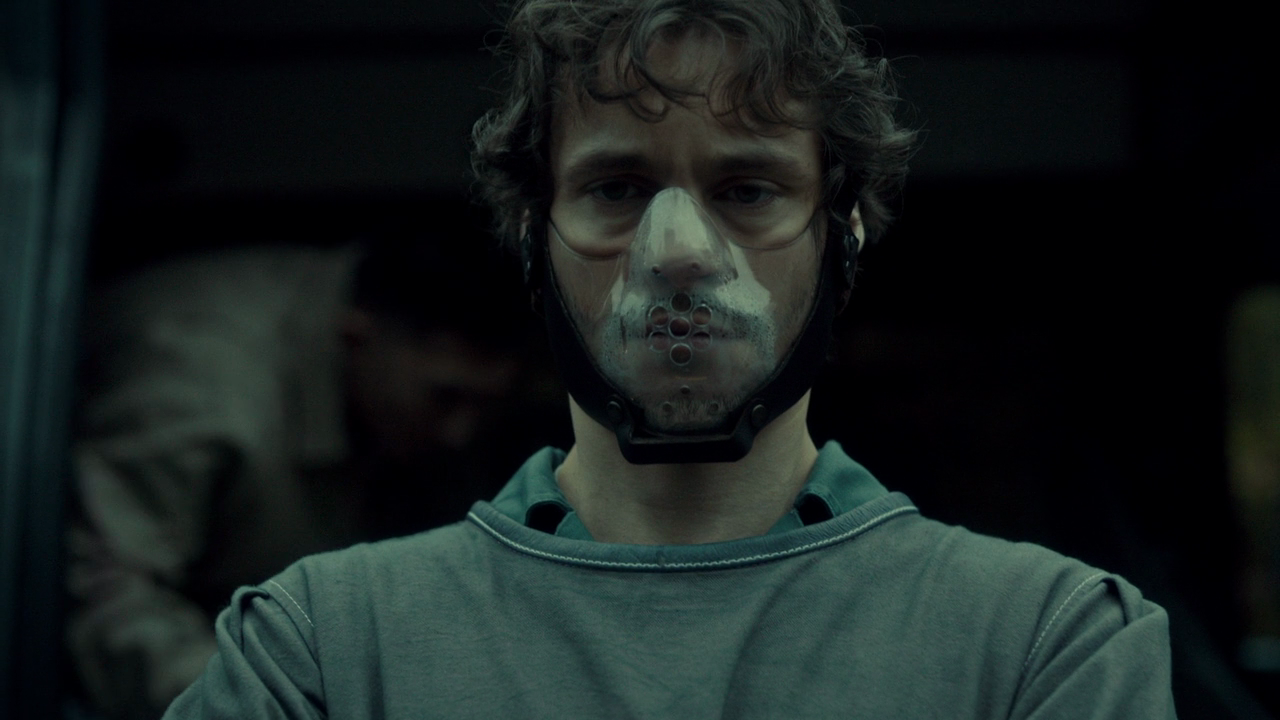 At last, the image from the season two poster appears in the show. The appeal, of course, is much like the final lines of the first season – the inversion of one of the defining images of Hannibal Lecter.

This is not the first time that Will’s investigative approach has been described as interpretation, but given the setup of Will being wheeled to a staged, framed tableau and the degree to which this particular work on Hannibal’s part is straightforwardly communicative the word stands out more in this context than many,

WILL GRAHAM: I strangle Beverly Katz, looking in her eyes. She knows me. I know her. I expertly squeeze the life from her, rendering her unconscious. I freeze her body, preserving shape and form so I can cleanly dismantle her. She cuts like stone. I pull her apart, layer by layer, like she would a crime scene. This is my design.

As Will subsequently admits to Jack, he did not come here to solve Beverly’s murder, and nothing he discerns here is useful as such – even for the audience its only exposition purpose is to give the explanation for how Beverly is displayed for anyone who missed the obvious. Instead he came to say goodbye. The revealing thing, then, is that his way of saying goodbye to his friend is to psychically reenact her murder.

WILL GRAHAM: Gideon knows who the Ripper is.

DR. CHILTON: And I suppose you do, too.

WILL GRAHAM: Wouldn’t it be interesting if we both said it was the same man?

DR. CHILTON: Yes, it would.

WILL GRAHAM: Shame we can’t talk to Abel Gideon about the Chesapeake Ripper. Just think, Frederick, you could be the one who catches him after all.

Will responds to the setback of losing Beverly by immediately escalating his manipulation of Chilton to bring Abel Gideon into play. This manipulation is so transparent that even Chilton can see it clearly, though this does not diminish its efficacy at all. 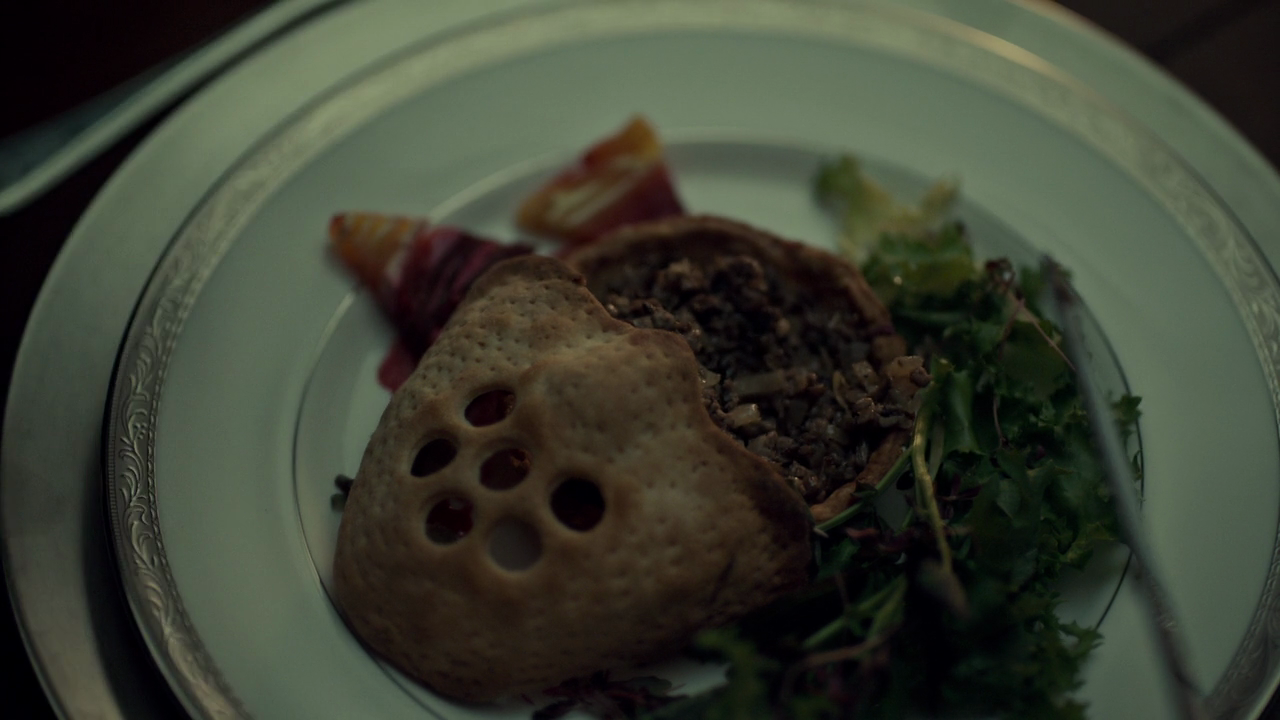 One of the more straightforward visuals Janice Poon has done for the show, the meat pie that Beverly is ground up into is fashioned after the iconic face mask that Will wears in this episode and that is most generally associated with Hannibal. Poon adamantly clarifies that the pie represents Will’s mask, not Hannibal’s, as “no one wants to keep him out of prison more than I do! Unless he can get a cell with an eat-in galley kitchen.” Stay tuned.

DR. GIDEON: The Ripper’s playing out a mannerly dance, getting close, but not too close, offering tokens of goodwill, but not giving away too much.

WILL GRAHAM: He gave you away. I remember the night in Dr. Lecter’s house. The night I took you there.

DR. GIDEON: The night you tried to kill me.

WILL GRAHAM: How do you think I found you? He sent me to kill you, Abel.

DR. GIDEON: Am I your evidence? Oh, you’re in trouble, Mr. Graham.

WILL GRAHAM: Why would you protect him?

DR. GIDEON: He’s done nothing to me. You were happy enough to try and kill me yourself. You have it “in you,” as they say. I’m intrigued to see what you try when I say no. He’s the Devil, Mr. Graham. He’s smoke. You’ll never “catch” the Ripper. He won’t be caught. If you want him, you’ll have to kill him.

One of two key exchanges in the episode, as Will and Gideon begin to dig into one another. Gideon’s realization of what Will’s plan is and incredulous reaction of how fucked he must be if this is what he’s trying is probably the highlight, although Izzard’s delivery of the grandioise “he’s the Devil, Mr. Graham. He’s smoke” is a very close second. Will, meanwhile, is content to play a long game, letting Gideon get his good lines in while waiting for opportunities to present themselves. Which, to be fair, in the last line they do.

HANNIBAL: Neither of us controls our stories well enough to get anything from exposing the other’s misdeeds.

DR. CHILTON: Here’s to that.

Hannibal persistently talks in these terms of stories, and the question of successfully controlling his story is one that vexes him, both in his unusual tendency to help people cover up crimes and in lines like this. Hannibal cannot control his own story because he has gone in a different artistic path.

DR. GIDEON: I can see why Chilton both admires and resents you, Dr. Lecter. Esteem in psychiatric circles still eludes him, even as it clings to you. He very much wants to be you.

HANNIBAL: He should be more careful what he wishes for.

DR. GIDEON: You should have been more careful with Will Graham. That young man has got a bone to pick.

HANNIBAL: As a therapist, I’m concerned with finding ways to overcome resistance, not build it up.

DR. GIDEON: You built up something, Dr. Lecter.

A conversation in which both sides are speaking codedly. It is not entirely clear what Hannibal wants out of this conversation, and thus doubly unclear whether he gets it. The interesting lines are “he should be more careful what he wishes for,” which neatly foreshadows what Hannibal has in mind for both Gideon and Chilton, and “you built up something, Dr. Lecter,” with which Gideon shows a near-complete understanding of Hannibal’s aesthetic pathologies.

HANNIBAL: We evolved the ability to communicate disappointment to teach those around us good manners.

Another scene in which Freddie gets to be Hannibal’s problematic fave – despite her taking a paparazzi photo of Hannibal, which he actively describes as “rude,” Hannibal is visibly fond of her in this scene, and seems to enjoy the conversation.

WILL GRAHAM: You killed the bailiff during my trial.

MATTHEW BROWN: Thought it might exonerate you. I read your file often enough. Easy to recreate your work. It was so specific. Though the bailiff was a bitch to get on that stag’s head.

WILL GRAHAM: And the judge?

MATTHEW BROWN: I killed the Baliff; the judge was somebody else

This is treated as a revelation, although careful inspection of “Hassun” makes it clear from the start that the judge was Hannibal. Still, it’s useful information for Will, even if it does not come close to assuaging his anger at Hannibal, as we’ll see.

More interesting is Matthew’s boastfulness that it was easy to recreate Will’s work, not least because in fact his failure to successfully do that is why the murder failed to exonerate Will. Will does not get into this, however, instead moving straight to what it is he wanted from this meeting.

WILL GRAHAM: I need a favor.

MATTHEW BROWN: I’m always happy to do a favor for a friend. Just say the words.

WILL GRAHAM: I want you to kill Hannibal Lecter.

What is most interesting about this is that Will has enough information that it should be clear Hannibal is moving towards letting Will out. Certainly it’s clear to him by now that Hannibal killed the judge and thus prevented his execution. And the risk to Will here is considerable – indeed, this blows up in his face pretty straightforwardly. And so this move has to be taken primarily as heroic – Will is killing Hannibal because he has an opportunity to stop the Chesapeake Ripper and takes it, despite the cost.

DR. GIDEON: No, he isn’t. Not yet. All the things that make us who we are. What has to happen to change those things? So much has happened to Will Graham. He’s a changed man.

ALANA BLOOM: Revenge against who? He thinks he knows who killed Beverly Katz?

The parallelism between Hannibal and Chilton’s treatment of their respective patients pays off as Gideon is able to understand the logic of transformation that underlies what’s happened to Will and, in an act of surprising empathy for the character, acts to help Will resist the transformation (as well as, of course, helping the show not lose its main character). 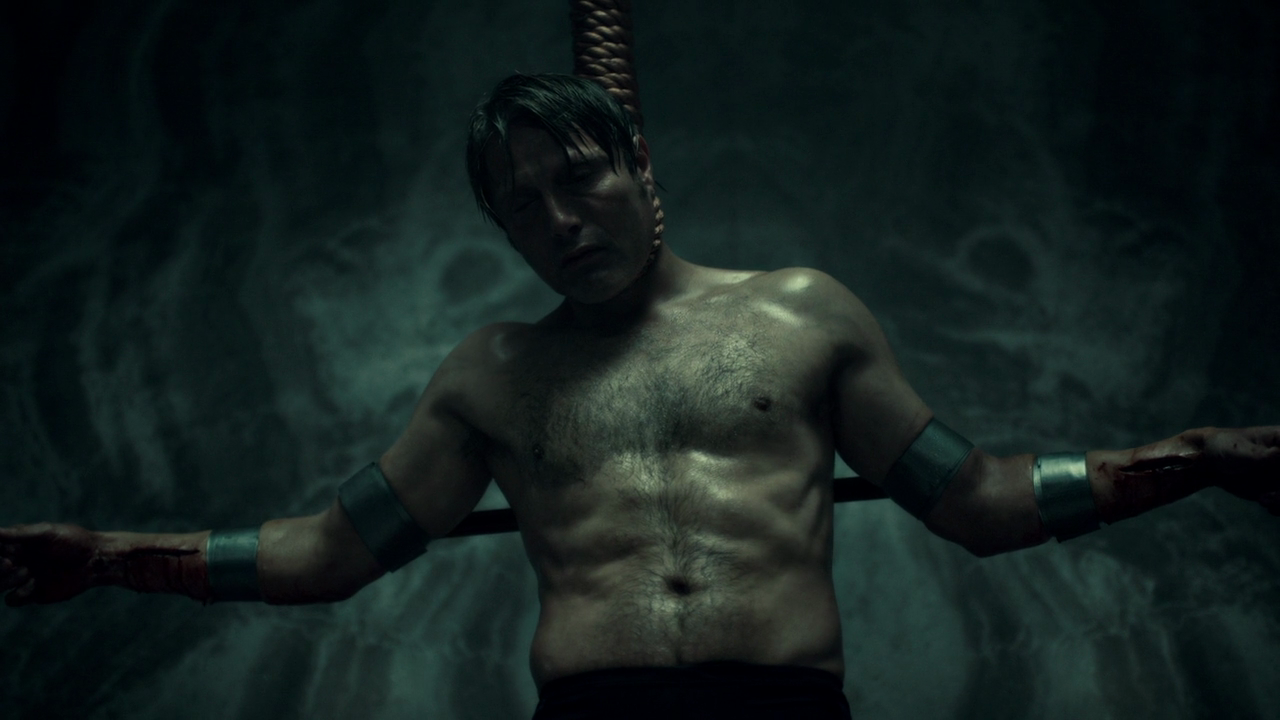 There are many reasons why Matthew’s attack on Hannibal has to fail, mostly involving the fact that you don’t have a show anymore if Hannibal goes down unsatisfyingly to a guy with only two speaking scenes in the whole show. But the fact that he so spectacularly misunderstands Hannibal as to think a crucifixion scene is an appropriate way for him to go is probably, in hindsight, the largest factor.