The Proverbs of Hell 8/39: Fromage 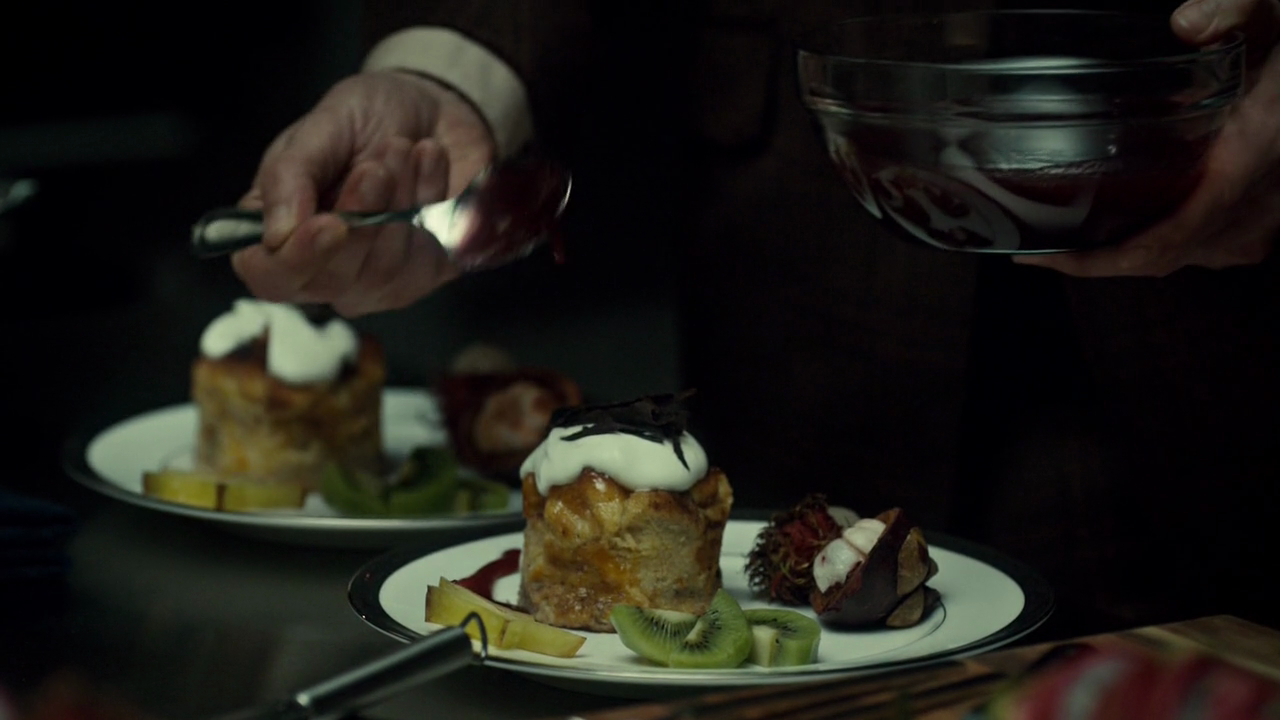 FROMAGE: Cheese. Relating this directly to the episode contents is tricky – it’s most likely a reference to Franklyn’s declaration last episode that he and Hannibal are “cheese-folk,” although it’s certainly possible Fuller imagined this episode to be somehow cheesier than previous ones. I mean, it does involve opening people up and playing them like cellos. 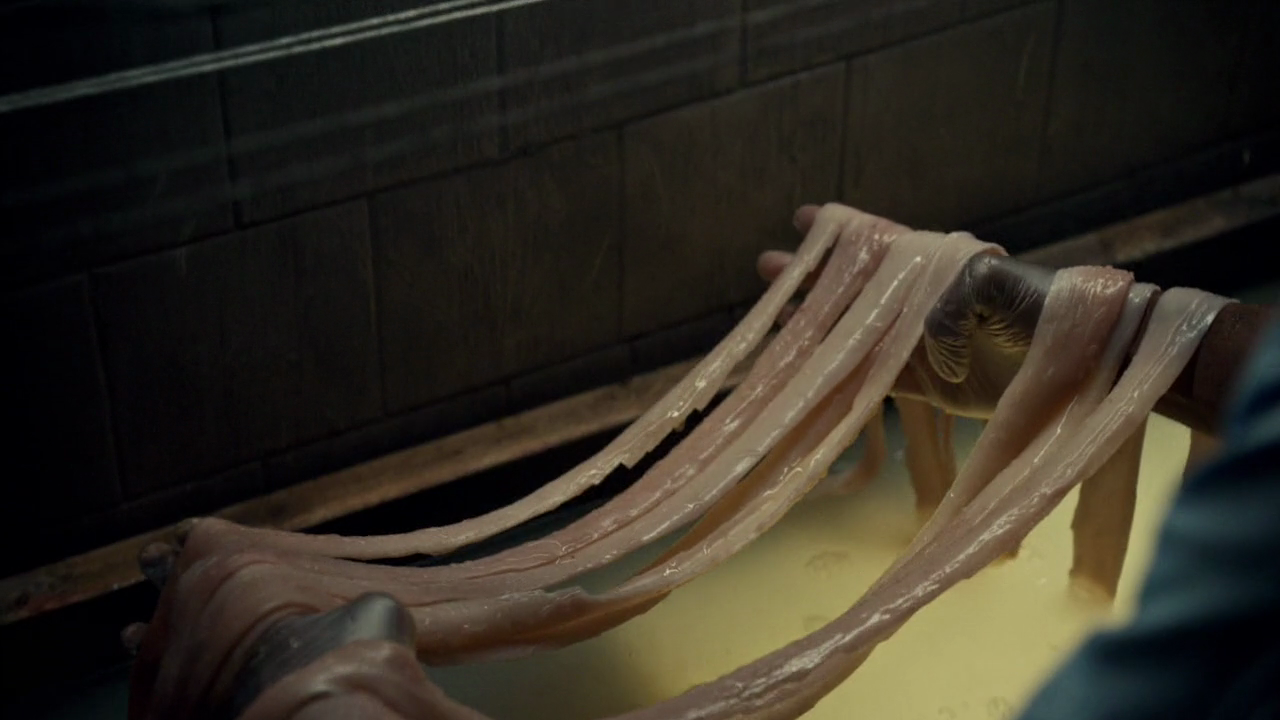 The soft-focus montage of stringmaking plays out over an unusually harmonious bit of music, making this particular process of dismembering people and repurposing their bodies an oddly pleasant, idyllic thing. It is worth contrasting with Blake’s The Marriage of Heaven and Hell, in which his (non-murderous) printmaking process is detailed as the workings of “a printing press in hell,” whereas here infernal content is presented in more sacred terms.

ALANA BLOOM: Why are you assuming I don’t date?

WILL GRAHAM: Do you?

ALANA BLOOM: No. Feels like something for somebody else. I’m sure I’ll become that somebody some day but right now I think too much.

WILL GRAHAM:  Are you going to try to think less or wait until it happens naturally?

ALANA BLOOM: I haven’t thought about it.

For the episode where the Will/Alanna sexual tension is finally grappled with Alanna, perhaps unsurprisingly, reverts to her manic pixie dreamgirl characterization. This is in many ways the least interesting available choice, and the two omitted lines from the script in which Will and Alanna talk about the difficulty of dating “ when you notice everything they do and have a pretty good idea why they do it” would have been considerably more interesting than just highlighting the lame joke.

FRANKLIN: I Googled psychopaths. Went down the checklist and was a little surprised how many boxes I checked.

HANNIBAL: Why were you so curious to Google?

HANNIBAL: Psychopaths are not crazy. They’re fully aware of what they do and the consequences of those actions.

Hannibal’s instinctively sticking up for psychopaths is cute, as is his carefully threaded needle of what does and does not constitute being “crazy.” For Hannibal, intentionality is a warrant of sanity. It is, of course, also the case that intentionality is a prerequisite for art – it’s only when we assume an author or artist who has crafted a deliberate “design” that it becomes possible for something to be art as opposed to merely aesthetically pleasing. Artists, then, cannot possibly be crazy to Hannibal.

It is worth contrasting the motivation here with the Hannibal-influenced presentation of the murder. What Tobias wants to do is to create an entirely ephemeral event bounded precisely in time. The tableau, however, is a decidedly different aesthetic goal – a lasting monument to the murder. This is worth considering in light of “Sorbet”’s discussions of theatricality, as many of the same issues apply, but here there’s an added tension between two very distinct conceptions of art-murder – one in which it’s visual, one musical. Spoilers: they have a fight, visual wins.

BRIAN ZELLER: He took the time to whiten the vocal chords before he played them. That’s not very contemptuous.

WILL GRAHAM: It wasn’t about whitening them. It was about increasing elasticity.

A rare moment when Beverly’s race becomes an active part of her characterization as she confirms her adherence to the stereotype of Asian children playing the violin, albeit not without a bit of eye-rolling.

WILL GRAHAM: We should be looking at musicians, people who make instruments, anyone who had a ticket to his last show. (Pause)  This takes a steady hand. A confidence. He’s killed before.

WILL GRAHAM: Not like this. This is a skilled musician trying a new instrument.

It’s interesting that the analogy for artistic style  – Tobias has crafted an homage to Hannibal here – is “instrument.” It would seem that the more on-point comparison would be musical style – a classical musician playing jazz, for instance. But “instrument” changes the tone, suggesting the differences between individual murderous pathologies are as fundamental as differences of medium. In other words, murder is not an art whose medium is human flesh, but rather one whose medium is psychopathology, with human flesh filling the same role as vibrating air molecules in music.

HANNIBAL: Among the first musical instruments were flutes carved from human bone.

WILL GRAHAM: This murder was a performance.

HANNIBAL: Every life is a piece of music. Like music, we are finite events, unique arrangements. Sometimes harmonious, sometimes dissonant.

WILL GRAHAM: Sometimes not worth hearing again.

HANNIBAL: He’s a poet and a psychopath.

Note the structure of this exchange, with Will and Hannibal talking past each other for the first few lines before their individual tracks finally merge into a harmonious conversation. It is, not to over-egg the custard, quite musical. Of particular significance is the way in which Will is the one to initially express a basic sympathy for murdering people, while Hannibal maintains a certain detachment, pathologizing Tobias.

TOBIAS: What instrument would that be?

On the surface, the theremin is an odd favorite instrument for Hannibal, whose aesthetic is usually overtly classicist. A 20th century electronic instrument seems like a weird choice for him. On one level, this serves as a useful reestablishment of Hannibal as Thomas Harris originally conceived of him, and not only because the detail of Hannibals theremin-playing comes from Hannibal. As Jack Graham has noted, Hannibal’s origins rooted in a smorgasbord of 20th century iconography, such that he becomes a sort of vampiric form of modernity. This, however, is something that’s lost by having Hannibal be in his 40s in a contemporary setting. And so having his instrument of choice be a profoundly modern, 20th century instrument reestablishes that link while introducing a striking and idiosyncratic detail in the process.

TOBIAS: Virginia? I thought it was French.

HANNIBAL: The Virginia wine revolution is upon us.

Hannibal’s fascination with Virginia wines, on the other hand (see also “Entrée”) is considerably more inexplicable. As with the Norton, he’s curiously fond of new world grapes (Vidal was developed in France, but is mostly associated with Canadian and the northern US), though Vidal does, in point of fact, make a very nice dessert wine. Of course, it’s notable that his Virginia wine comments have been made to Tobias and Dr. Chilton; it may just be what he serves people he doesn’t like very much.

HANNIBAL: For the first time in a long while I see a possibility of friendship.

BEDELIA: Is there someone new in your life?

HANNIBAL” I met a man much like myself, same hobbies, same world views. But I’m not interested in being his friend. I’m curious about him and that got me curious about friendship.

Hannibal’s choices when it comes to friendship are interesting, not least because the available outcomes are “the person is Will Graham” or “Hannibal decides to kill them.” His rejection of Tobias highlights one of the most basic issues – Hannibal doesn’t actually like other serial killers very much. This is unsurprising – the last thing Hannibal wants out of a friend is someone he feels as though he’s in competition with. Will – a pliable subject he can tempt and corrupt – is much more his speed, although as we’ll eventually see there are no end of other ways for friendship with Hannibal to end poorly.

TOBIAS: Mine are imported from Italy. Best catgut is. The String section of the Baltimore Metropolitan Orchestra refuses to play anything else.

Well you can’t say Tobias doesn’t get the aesthetic of the show he’s on. “Richer, darker sound” indeed. But what’s more enticing is the connection between sound produced from human bodies and the unspeakable, and the suggestion that it is only when it is literally played on human bodies that music becomes able to transcend language.

WILL GRAHAM: Sounded like a dog got hit by a car. You didn’t hear it?

OFFICER STEWART: I didn’t hear anything.

Will’s life is in effect saved by his auditory hallucinations, which draw him out of Tobias’s shop just before Tobias gets murdery. This should not, by this point, be surprising – although Will’s neurological symptoms are being caused by his encephalitis, Hannibal simply doesn’t take place in the sort of world where just because something is a hallucination caused by serious brain disease it’s not in some essential sense true and important. More broadly, if one views Will’s hallucinations (and indeed encephalitis) as coming from Hannibal in any sense, this hallucination amounts to Hannibal saving his friend. 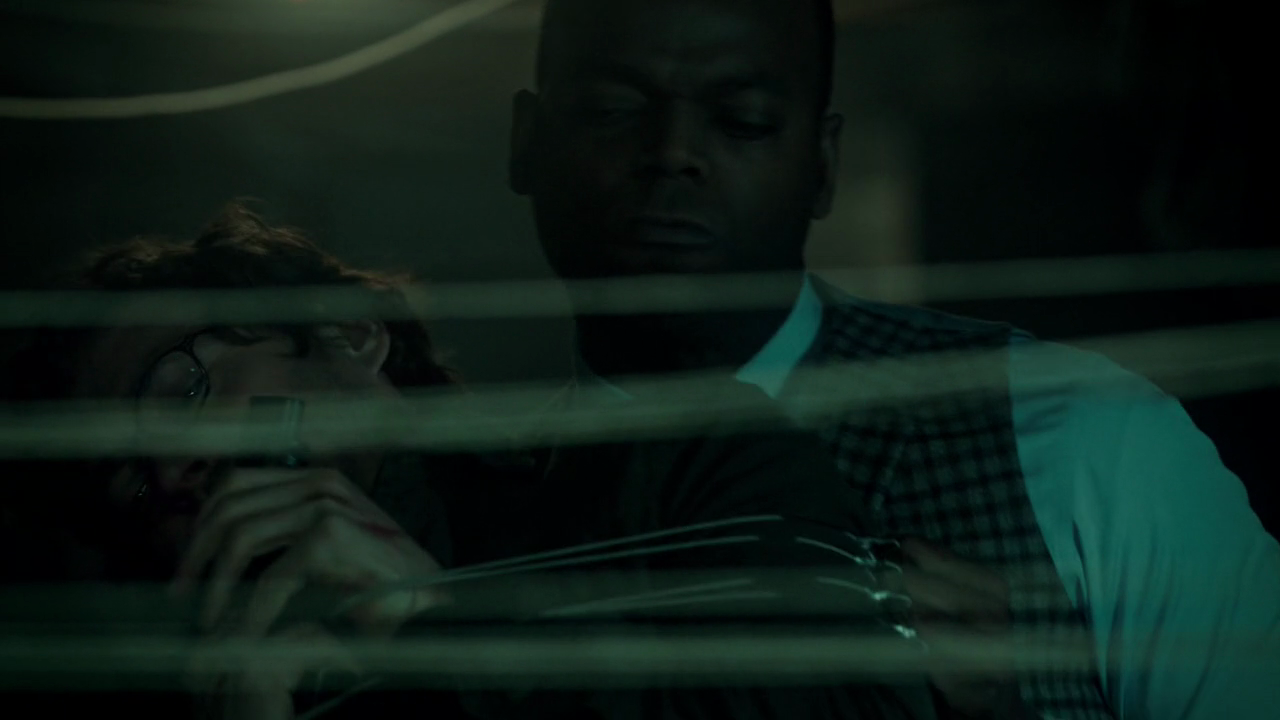 The sound design on this scene, with the gunshot almost entirely drowned out by Brian Reitzell’s shriekingly dissonant strings, is extraordinary, and finally provides an opportunity to talk about Reitzell’s contributions to the series. These can be a mixed bag – Reitzell’s score is always effective, but is so monolithically striking that it can become overbearing and tedious over time – “Oh, what a shock, more dissonance and drums.” Still, the show is simply unthinkable without it – it’s as essential to the show as Janice Poon’s food designs.

HANNIBAL: I’m sorry, Franklyn, I think it’s best if you see another doctor.

FRANKLIN: You’re giving me a referral.

FRANKLIN: You were a referral.

The problem Hannibal is describing is transference, which broadly refers to the process of directing one’s feelings for one person towards another, but tends to specifically refer to the way in which a therapist becomes the receptacle for their patient’s emotions. Often this manifests as sexual desire, but in Franklin’s case it is part of his narcissistic desire to “touch greatness.” Although the technical term (somewhat surprisingly) does not come up, it’s a vital concept for understanding Will and Hannibal’s relationship.

HANNIBAL: Franklin, I want you to leave now.

TOBIAS: Stay right where you are, Franklin.

FRANKLIN: You’ve done something horrible and I know you wish to god you didn’t, but you did and there’s nothing you can do to change that. Only thing you can change is your future. You’re probably scared. Probably feel like you’re all alone.

FRANKLIN: That’s right. You’re not alone. Nothing has happened in our friendship that you and I can’t recover from.

Hannibal’s murder of Franklin at this point is a bleakly comedic beat; Mikkelsen has suggested in interviews that it does not come because Franklin is rude, but rather because he’s being “a dumbass,” which is a fairly accurate summary of the situation, and merits him a more complete sense of disrespect than the usual cannibalism/art tableau method.

It is worth noting that Franklin and Tobias’s relationship echoes that of Jame Gumb and Benjamin Raspail in Silence of the Lambs, complete with the musical connection. 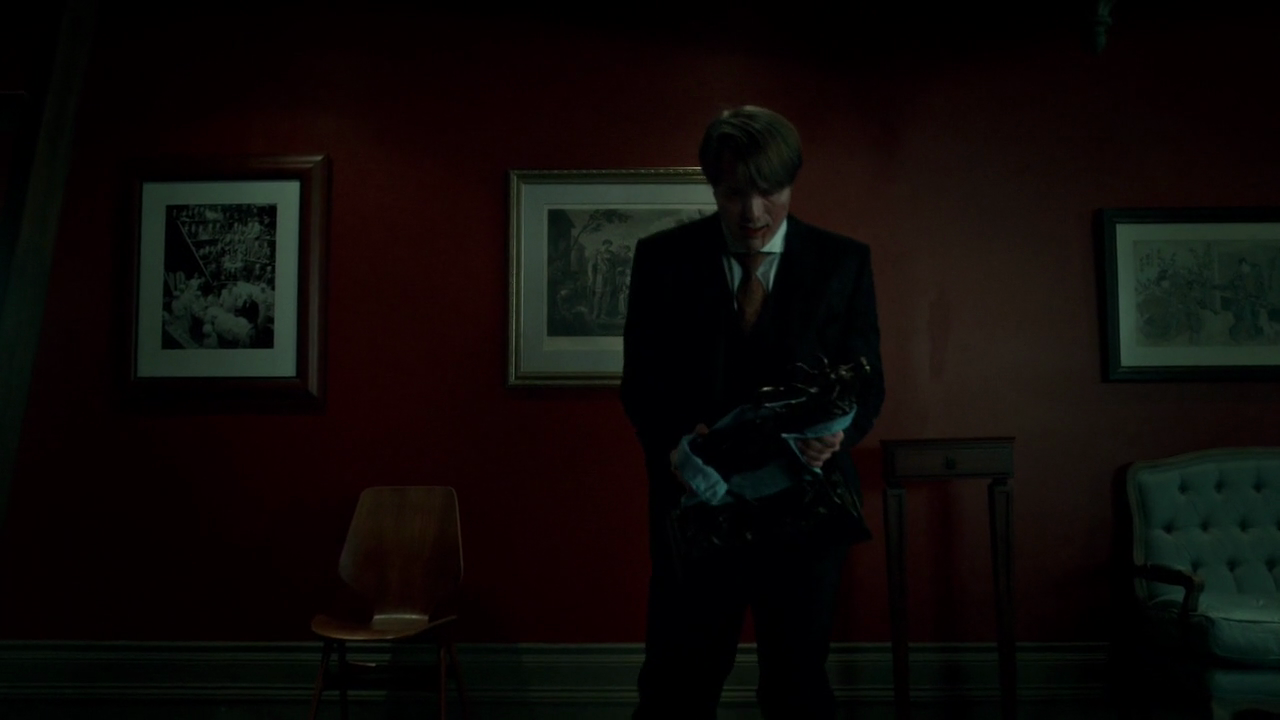 Hannibal killing Tobias with the stag statue is a classic case of the show’s “never be obvious when being really fucking obvious will do” aesthetic. The fight scene as a whole was a suggestion/request on Mikkelsen’s part, as the actor felt it was something he did well. Lawrence Fishburne made a similar request later in the season based on his experience in The Matrix, and Fuller obligingly wrote him a fight scene as well.