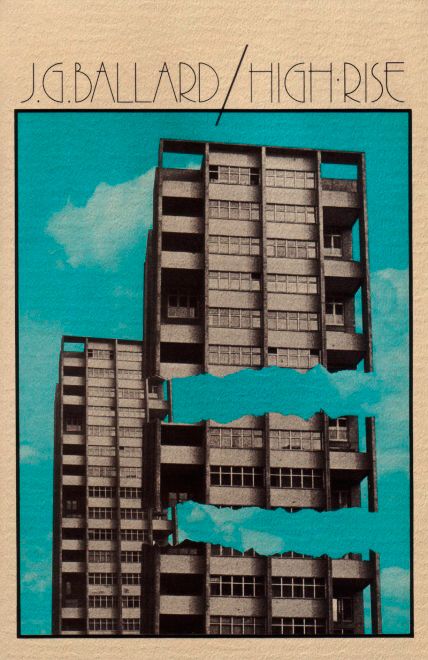 ecological analysis of the absolute or relative character of fissures

As the precise center of the hypercube, Ballard’s novel is even more tightly bound into 1975 than the Wheatley-Jump film. Lacking the externalizing vantage point of futurity, Ballard cannot look at what the brutalist tower blocks became, and is forced instead to extrapolate out from what they are. Which is, of course, Ballard’s basic job description. He’s a science fiction writer by trade. His first four novels imagined apocalyptic scenarios, starting with The Wind From Nowhere, in which the world is destroyed by constant hurricane-force winds, and subsequently The Drowned World, The Burning World, and The Crystal World, which feature flood, drought, and weird crystalline growths appearing on everything. But starting with his alarmingly experimental 1970 novel The Atrocity Exhibition, a series of reveries in which human bodies, mediated culture, and material carnage of the 1960s blend together into one of the most unsettling psychic landscapes of the 1970s (no mean feat given the decade), his career took a different track.

This resulted in a series of three books of which High-Rise was the culmination. These novels were still science fiction, but of an unusual sort in which there are no imaginative technologies or futuristic conceits. Instead they are all set in the present day of the 1970s, with Ballard taking the technologies and social structures of his time and twisting them to their most suggestively violent excesses. And so in Crash the automobile becomes a source of infinite perversions, in Concrete Island the median of a highway becomes an inescapable island, and in High-Rise, well, you know.

But it would be a mistake to read Ballard as particularly concerned with any of these technologies per se. Wheatley has proclaimed that “it’s important that the film isn’t seen as a critique of Brutalist architecture,” a goal he’s not entirely successful at, but it’s absolutely true of the novel. Ballard famously described his approach to science fiction as rejecting the notion of outer space in favor of what he called inner space, “an imaginary realm in which on the one hand the outer world of reality, and on the other the inner world of the mind meet and merge.” In this regard, High-Rise is no more a critique of brutalist architecture than The Drowned World is of water.

This is not to say that the building, or indeed brutalist modernism, are irrelevant to Ballard’s project. High-Rise has its own architecture, composed according to a structural logic that provides much of the book’s actual energy and momentum as it moves towards its conclusion. The book cycles among three viewpoint characters – Laing, Wilder, and Royal – in increasingly shorter stretches, starting with three consecutive chapters for each character, then a second pass with two, and finally a third pass through with single chapters for each character, with Royal’s final chapter further fragmenting so that Wilder breaks into it at the end, and a final Laing chapter as befitting his eventual ascension within the building.

So the structure is essentially that of three pyramids whose apexes converge – a configuration that echoes the “five fingers reaching upwards” design of the high-rise complex at large. What’s key, however, is the sense of acceleration. The shortening cycles of chapters mean that the structure doesn’t even start to become apparent until the book’s halfway point, and isn’t fully revealed until near the end, by which point the shifts in perspective have acquired a breathless and inevitable momentum. This suits the funnel-like nature of the prison’s mechanism, with everything converging towards the inevitable future. But it’s worth comparing the book’s halfway point – the rough emergence of its structure as it loops back to Laing chapters for the first time – with the film’s, which is Munrow’s suicide, an event that happens in the initial bank of three Laing chapters in the book. In other words, the point where the high-rise turns outright lethal is the central hinge of the film, making the overall structural dissolution into barbarism its subject. But for the book this happens much earlier, a subtle but significant shift in emphasis.

Another way to put all this is that Ballard is fundamentally more interested in the psychologies of the building’s residents than he is in the building. Perhaps the clearest example of this is Wilder. In the Wheatley/Jump film, Wilder is driven first and foremost by class resentment. His animating passion is his anger at the way in which the poorer, lower-floor residents enjoy fewer of the building’s amenities than the upper floors despite contributing equally to the building fees. But while class, like brutalism, is present in the novel, Ballard is explicit that Wilder’s quest to ascend the high-rise is not motivated by a sense of “social advancement,” but is instead framed as “a calculated attempt to come to terms with the building, meet the physical challenge it presented to him, and then dominate it.” More broadly, Ballard’s Wilder is an almost crudely Freudian character driven primarily by his desire to replace the “over-emotional mother who had loved him devotedly through the longest possible childhood she could arrange,” a desire that’s paid off bluntly in his final moments, in which “shy but happy now, Wilder tottered across the roof to meet his new mothers.”

What is interesting about these descriptions, though, is not merely their focus on the characters’ interiority but the curiously clinical and diagnostic tone with which they’re issued. This is a hallmark of Ballard’s style – consider, for instance, the description of Laing in which he notes that “a new social type was being created by the apartment building, a cool, unemotional personality impervious to the psychological pressures of high-rise life, with minimal needs for privacy, who thrived like an advanced species of machine in the neutral atmosphere.” This tone is commonly and understandably ascribed to the fact that Ballard studied medicine before becoming a science fiction writer, but in most regards it is not the blandly straightforward questions of Ballard’s personal psychology that are most interesting here. Rather it’s the simple fact of Ballard’s cool and impersonal distance.

By positioning himself as a detached researcher who simply documents the psychic perversions of his settings and characters Ballard can be understood as a curiously still point. To an exterior vantage point – and it is possible no such thing exists – he appears to be making no effort to escape whatsoever. Indeed, it is possible to reorient the entire image of the hypercube, inverting the corners so that it is interpreted inside-out, such that Ballard’s position within the prison becomes that of the guard in Jeremy Bentham’s panopticon, with every other point within the hypercube subject to the capricious whims of his gaze. (Bentham described this design as “a mill for grinding rogues honest,” a line that anticipates Le Corbusier’s famous description of a house as “a machine for living in” by nearly a century and a half.)

The difference between this and our perspective may be a mere optical illusion, but it has to resolve somehow, and in practice it goes the other way: Ballard’s gaze is turned inwards. This ought not surprise us; it was always the most probable attempt at escape. If the exterior landscape is a death sentence, configure the interior. But for all that Ballard imagined himself as a chronicler of inner space, he very clearly did not conceptualize it as any sort of exit strategy, least of all for himself. He’s trying to get further in.

Put another way, Ballard’s position at the center of the hypercube is entirely deliberate, but it is not because he was seeking the perfect vantage point from which to observe modernism’s ruin. Rather, it’s because he was always the primary subject of his own thought experiments. He makes this explicit in Crash, where the narrator is in fact named “James Ballard,” but Robert Laing’s detached clinicism clearly flags him as an authorial insert as well.

This does not translate into any sort of easy and crass psychoanalysis. Ballard was not some Borroughs-esque edge case struggling to maintain a functioning relationship to 20th century liberal society. He was a low-key family man who wrote fantastically disturbing books about the late 20th century taking a sudden yet eerily logical swerve into barbarous perversion. Efforts have been made, not unreasonably, to root this tendency in Ballard’s own childhood experience of living in occupied Shanghai during World War II, and Ballard ultimately wrote about these experiences in his best-known book Empire of the Sun. And Ballard himself gives credence to that, noting of his experience, “I don’t think you can go through the experience of war without one’s perceptions of the world being forever changed. The reassuring stage set that everyday reality in the suburban west presents to us is torn down; you see the ragged scaffolding, and then you see the truth beyond that.“ And certainly part of that experience was the revelation that he, like Laing, was unexpectedly well-adapted to the barbaric. Past this, a psychobiographic explanation vanishes into inner space.

But the outlines of the pathology, even if dissociated from James Graham Ballard himself, remain useful. The rooting of the obsession in World War II is particularly key. The event itself is oversignified, less hypercube than fractal, its every contour multiplying with closer inspection. Nevertheless, certain useful patterns emerge, particularly its simultaneous role as the turning point of the 20th century and the final payment on its own bloody debt to the 19th and the basic narrative of normality blurring into horror without anything like a decisive moment where the madness begins. Instead the facial mask simply slips off the skull, the everyday social order of modernity turning out to have only ever been a thin veneer atop unhinged and sadistic depravity.

And so we see the dual nature that defines the prison’s cruelty. On the one hand it is defined by its temporo-geographic vastness – the fact that no point within easy reach of the century’s turn lies outside its grounds. On the other, it is defined by its boa-like coils, where even the slightest motion threatens to tear the veil between it and unimaginable horror such that all struggle proceeds only towards death.

Beneath the paving stones, the meat.

Close but no Cigar The Lost