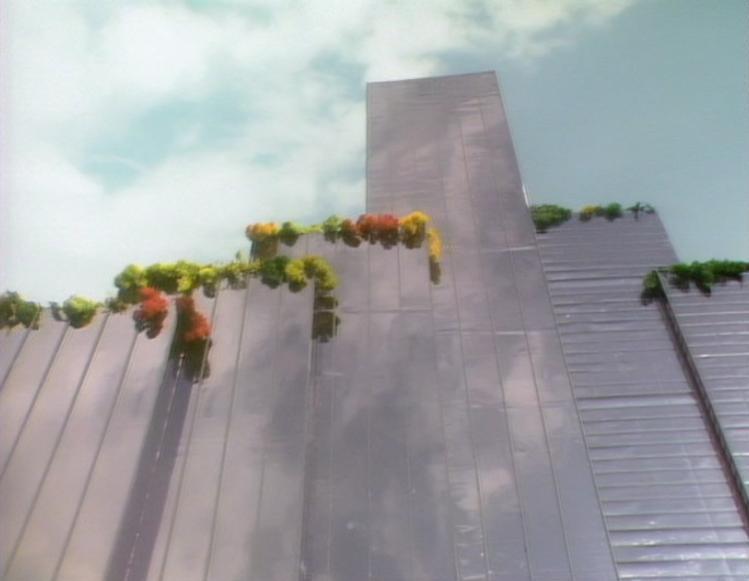 Going into directing High-Rise, which would see him working with the highest budget of his career, Ben Wheatley directed a pair of episodes of Doctor Who on the logic that working fast and on the tight budget of television would be, as he put it, “like a boot camp” that would leave him “fighting fit to go into High-Rise.” But the choice of Doctor Who was fitting in another regard, in that one of the closest existing things to an adaptation of High-Rise prior to the Wheatley-Jump film was the 1987 Doctor Who serial Paradise Towers.

Like Wheatley’s two episodes, which served as the first two stories for Peter Capaldi’s incarnation of Doctor Who and as the first two stories for newly installed executive producer Brian Minchin, Paradise Towers was one of the opening stories for both Sylvester McCoy’s iteration of the character and script editor (at the time essentially one of two people filling the role now filled by the executive producers) Andrew Cartmel. And indeed, Wheatley watched Paradise Towers in preparation for High-Rise, although his conclusion was that it “more like an amalgam of A Clockwork Orange and other stuff” than an adaptation of High-Rise.

This is not entirely fair of Wheatley. Certainly it’s clear that High-Rise was a major influence on Paradise Towers, a story set in a crumbling modernist tower block that has fallen to anarchy, with gangs roaming the hallways, cannibalistic residents, a triad of factions within the building, a focus on climbing the tower, and a key scene set at a swimming pool. Certainly Stephen Wyatt, the writer of the story, makes no secret of the inspiration. Still, Wheatley’s right that it’s not an adaptation per se. Given that a key part of what High-Rise does is its “science fiction without futurity” approach, moving the concept to a more traditionally science fiction setting in which the tower block is on an alien world and has homicidal cleaning robots fundamentally changes things. Adding a figure like Doctor Who that combines Wilder’s insurrectionary tendencies with an aristocratic bearing shifts the mix even more.

But perhaps the biggest change is simply that there’s no character in Paradise Towers who even remotely resembles Ballard/Laing. Although the extremes of the class structure are retained through the Royal-equivalent Great Architect Kroagnon, the actual tenants of Paradise Towers – the cannibalistic Rezzies or the girl gang Kangs – are all clearly working class, and the conflict between the two groups is more generational than economic. Entirely absent from Wyatt’s tale, however, is the hyper-adapted middle class that serves as Ballard’s primary focus. On the whole, however, this decision is relatively on-point. The modernist high-rise, at least in the UK context in which Ballard and Wyatt were writing, was always aimed at the poor, seen as a smaller-footprinted alternative to the sprawling terraced housing in which poor people had previously been housed. More to the point, in the twelve years between High-Rise and Paradise Towers it became increasingly clear that that utopian rhetoric with which the terraces’ demolition and replacement had been justified was falling rather short of the reality. As Alan Moore points out, for instance, “dozens of identical tower-blocks were erected across Britain in the 1960s, all designed with a central stairwell that, in a fire, acts like a chimney flue,” noting the grim irony that one such building, St. Katherine’s Court, is almost precisely located where the Great Fire of Northampton broke out in the 1970s. In terms of Paradise Towers the obvious book to point to is Alice Coleman’s controversial 1985 book Utopia on Trial, which suggested that poor design in British tower blocks was directly responsible for the high crime rates within them.

It’s not that these concerns are absent from Ballard’s book – the high-rise is clearly plagued by poor design, and the presence of Anthony Royal makes the question of design central to the book, even if Royal is, in the book, merely a contributing figure in the building’s design as opposed to the visionary of the Wheatley-Jump film and, for that matter, Wyatt’s undead horror-architect Kroagnon. And if one is to cite Utopia on Trial as evidence that something was in the air in 1987, one would be equally obliged to note the 1972 demolition of the American Pruitt-Igoe complex, a crime-ridden travesty of a building complex designed by internationally renowned architect Minoru Yamasaki. (“I never thought people were that destructive,” Yamasaki lamented in 1965.) Nevertheless, the vision of the middle class as somehow a central concern of the brutalist tower block is by some margin the most unrealistic aspect of Ballard’s vision of social collapse, and the decision by Wheatley and Jump to centralize class conflict is at best only a partial fix.

In place of any sort of Laing figure, Wyatt’s triad is completed by the Caretakers, the building maintenance/police force tasked with carrying out the precisely framed instructions of the Great Architect. With the Chief Caretaker played by Richard Briers as a scenery-devouring Hitler pastiche and a panopoly of jokes mined from the byzantine nature of the Caretakers’ rules and regulations, the Caretakers serve not as markers of any sort of Ballardian coolness, but of authoritarian rigidity. What’s interesting, though, is that Paradise Towers, more than either the original or cinematic versions of High-Rise, is actually intended as a critique of brutalism, what with the ultimate villain of the piece being the undead spirit of the Great Architect.

More to the point, however, the story is rife with active references to the material history of modernist architecture. Kroagnon, whose previous work includes Golden Dream Park, The Bridge of Perpetual Motion, and Miracle City, is a relatively direct riff on Yamasaki, who also designed the main terminal for the St. Louis airport and the World Trade Center, getting the latter job, somewhat alarmingly, right as Pruitt-Igoe was going to hell in a handbasket. His central motivation – that his majestic designs not be ruined by human occupants – is similarly easily read as a satirical twist on Yamasaki’s famous 1965 lament regarding his disastrous design, “I never thought people were that destructive.” And Doctor Who’s assessment of Kroagnon’s work on Paradise Towers, “it displays exactly what everyone says is your usual failure as an architect: not making allowances for people” is clearly recognizable as one of the standard critiques of brutalist design, and for that matter as a variation of Ballard/Laing’s description of the high-rise as “an environment built, not for man, but for man’s absence.”

The connection between brutalist architecture and petty authoritarian may seem non-obvious (although you can say that about the connection between brutalist architecture and cannibalism), but begins to make sense when you realize the larger shift that Andrew Cartmel’s arrival was bringing to the show. Cartmel had gotten the job on the back of impulsively answering producer John Nathan-Turner’s interview question about what he’d like to do with the show with “overthrow the government.” While it wouldn’t be until 1988’s The Happiness Patrol that the show would offer a direct attack on Thatcher (portraying her as the head of a murderous dictatorship where happiness is compulsory and executions are carried out by a homicidal Bertie Bassett), the turn away from the navel-gazing continuity porn of the previous few years and towards writing about thinly veiled versions of the high-rises outside the BBC Television Centre’s Shepherd’s Bush windows was clearly a step in pursuit of this goal, if only in some Ballardian sense of converging inner and outer landscapes. And so in the context of the détourning cheek of merging Doctor Who’s childrens panto vibe with Ballard’s perversity the target of all the digs at petty authoritarianism is perfectly clear.

Given that Thatcher is also what Wheatley sets as the direction in which Ballard’s high-rise reaches, this renders Paradise Towers the first thing we have found within the hypercube that is attempting an escape. Alas, in most regards it is not a particularly compelling one. On a political level, the story’s solution is along the lines of Nathan-Turner’s response to Cartmel’s revolutionary ambitions, which was to inform him that he could, at best, “get a message across about how black people and white people and green people and purple people were all equal,” which is to say that the surviving Kangs, Rezzies, and Caretakers make a big show of banding together against Kroagnon and, with Doctor Who’s help, prevail. A bit of class consciousness is certainly no bad thing, but there’s no serious possibility that “cooperation” is going to arrest our progress down history’s gullet.

A more promising angle comes in the form of the catalyst for the Towers’ quasi-revolution Doctor Who himself. The fusion between his shabby and everyman demeanor (one of the fundamental delights of Paradise Towers is the interplay of Sylvester McCoy and the Kangs) and his mythological status as a literal Lord of Time makes him a symbol that traverses the High-Rise structure, spanning from Wilder to Royal and thus, implicitly, emboiting Laing and with him Ballard. Of particular note within the character’s greater mythology is his relationship with the Panopticon, our prison’s conceptual obverse, which is fundamentally that of a haunting outsider.

Even better, however, is his time machine, the TARDIS, which is famously bigger on the inside, a vast hypercubic structure manifesting its exterior cell throughout the entirety of space and time. Viewing the results of this as travel, which the adventure serial frame essentially forces, the path becomes recognizable as a four-dimensional dérive, capable of transgressing against even the expansive mechanism of hypercubic modernity. As dimension-rending files baked into cakes go, a fictional time machine is about as useful as “cooperation,” but we can still draw lessons from the abstract form, even if we struggle subsequently to figure out how to implement them in a materially plausible way.

The most obviously significant of these has already been mentioned – the TARDIS’s eccentric relationship between interior and exterior. Much as Ballard can be alternately viewed as maximum security prisoner or Panopticon guard, the TARDIS can be viewed in its conventional narrative role as a blue box concealing a vast interior dimension or in a stranger and more inverted role. If one understands the exterior as suggested above – as a door pushed into normal space – then the crisply geometric console room must in turn be interpreted as surrounding the entirety of space and time, permeating every instance and geography with the possibility of its aperture’s arrival. And it is this emboitment of space-time that enables any liberatory potential that Doctor Who offers to the high-rise’s deadly machinations.

In other words, you escape a hypercubic prison by putting it in a box.

The Lost Permanent Saturday: What I guess’d when I loaf’d on the grass