The Proverbs of Hell 1/39: Apértif 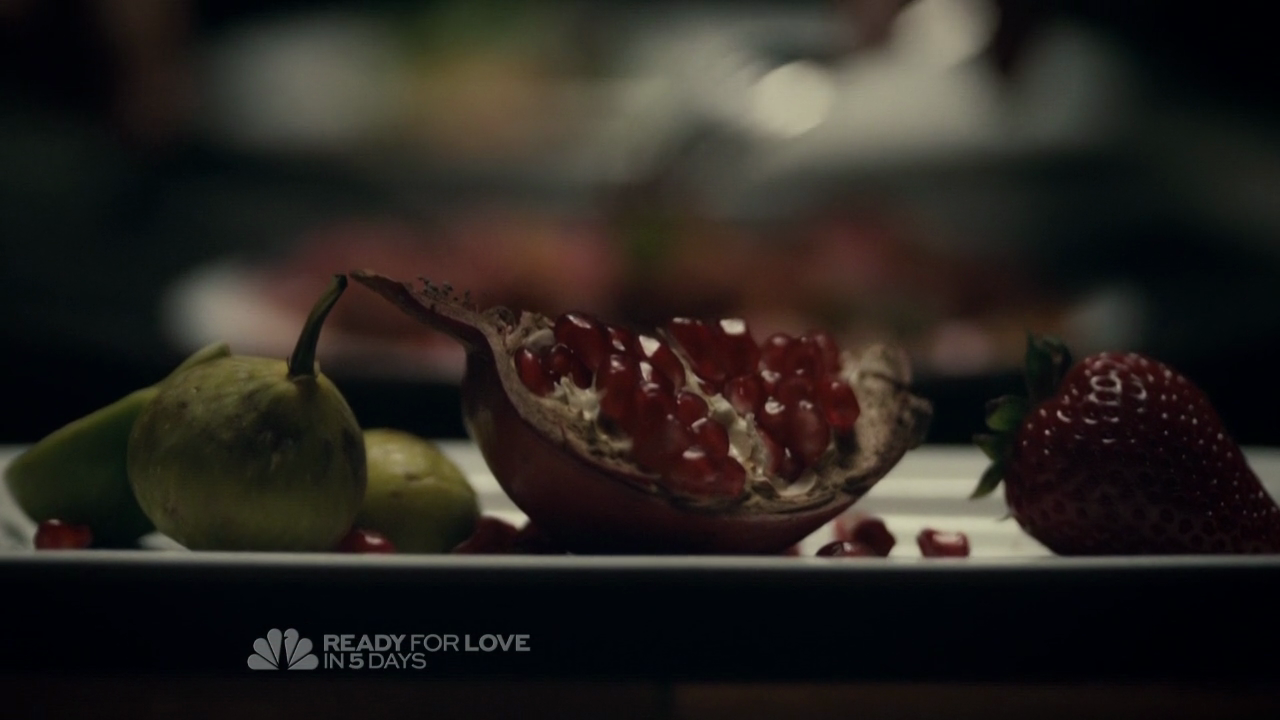 APERTIF: A pre-dinner drink to whet the appetite. In this case, it is an expansion of the Garret Jacob Hobbs case, which, in Red Dragon, is essentially presented as a precursor to a precursor, the case Will worked before Hannibal.

WILL GRAHAM: I shoot Mr. Marlow twice, severing jugulars and carotids with near surgical precision. He will die watching me take what is his away from him. This is my design.

The idiosyncratic “design” sets up the show’s defining perversity: the idea of murder as something that is aestheticized. Significantly, it is Will who introduces this term, whereas Hannibal’s only murder of the episode is Cassie Boyle, which he commits as a pastiche of Garret Jacob Hobbs’s murders. So the two characters begin as doubly opposed. On one level, Hannibal is the creator in that he commits art murders, whereas Will, as the detective interpreting those murders, is the critic. On the other hand, it is Will who is presented as the imaginative figure, whereas Hannibal is reduced to a responsive role, reinterpreting other people’s murders.

It is also worth highlighting what, precisely, the design of the initial murder was. It is not the precision of the kill shot – the technical acumen with which Mr. Marlow’s death is executed. Rather, it is the psychological configuration he wishes to bring about that is the design. There is obviously a degree of megalomania here – a desire towards the demiurgic. But there’s also a healthy dose of a good old-fashioned Ballardian “make the external landscape match the internal one” to it. Regardless, the important takeaway is that murder is about far more than mere meat. 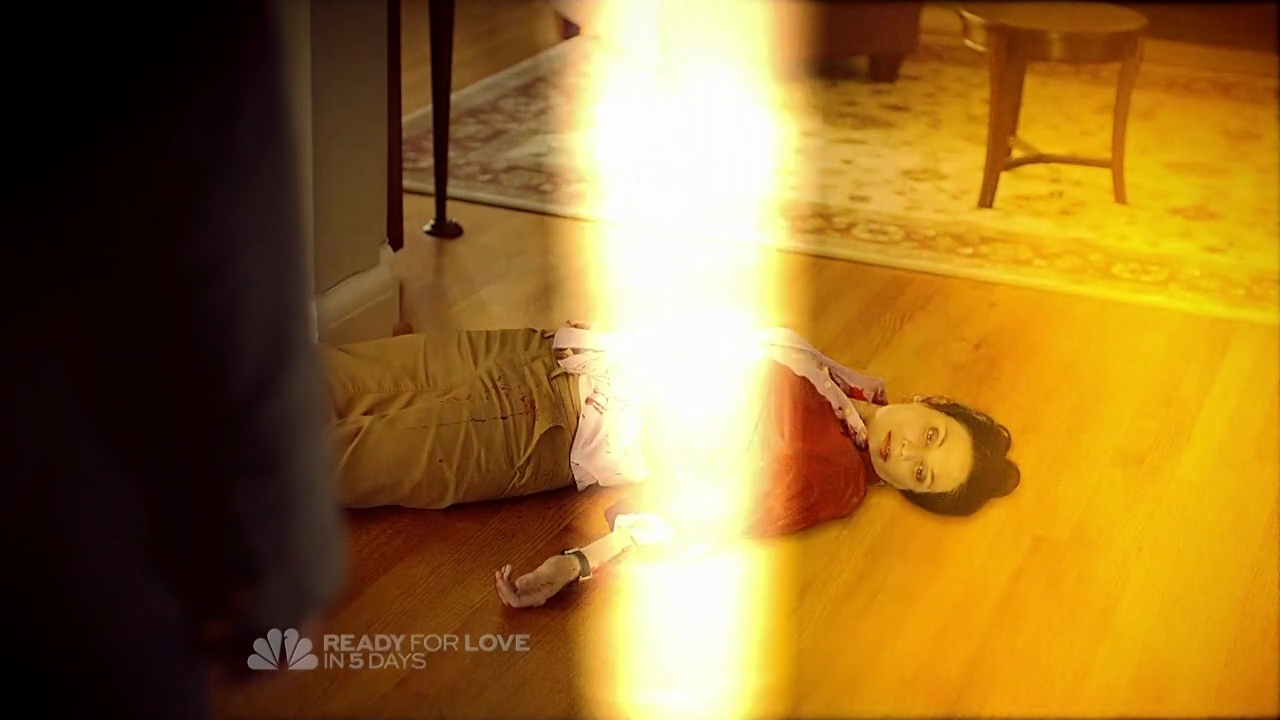 The pendulum is extrapolated from a throwaway line in Red Dragon. It immediately serves to introduce the fractured narrative space of Hannibal, simultaneously dividing space, time, and reality, all in multiple senses.

JACK CRAWFORD: Where do you fall on the spectrum?

WILL GRAHAM: My horse is hitched to a post closer to Aspergers and Autistics than narcissists and sociopaths.

Positioning Will as on the autism spectrum is an interesting move with regards to his stated skill at empathy. In practice the show plays more than a little fast and loose with what exactly it is that Will does, and its resemblance to empathy as conventionally understood is tenuous. Nevertheless, given the common myth of neuroatypical people lacking in empathy, putting Will on the spectrum has to be taken as one of the show’s more charming conceits.

ALANA BLOOM: Normally I wouldn’t even broach this, but what do you think one of Will’s strongest drives is?

JACK CRAWFORD: Fear. He deals with huge amounts of fear. Comes with imagination.

Within the slipperiness of exactly what Will does, the show’s oscillation between framing it as empathy and imagination is the most interesting. On the surface these are two very different things: empathy is perceptual, imagination creative. The division is readily healed by consulting William Blake on the subject of imagination. For Blake, imagination is a faculty to be added to perception. Indeed, it is the fact of man’s imagination that creates abstraction and order over the dead-eyed, vegetative world of nature. Imagination is thus more real than mere perception – a higher order of the cosmos.

Within the context of Hannibal, this distinction adds an unsettling light to what Will does. If the empathy that he brings to crime scenes is an act of imagination then the resulting sense of design must belong to Will, not the killers themselves. Will creates a higher structure out of the tortured meat before him, and this structure proves more real and more powerful than the killing on its own. On a basic level this can be read as a crude and obvious comment about the relationship between art and audiences, but it has many other implications that are both more interesting and more disturbing.

Blake, for what it’s worth, suffered from what he described as a “nervous fear,” which appears to have been the source for his oft-cited cantankerousness.

HANNIBAL: What he has is pure empathy. And projection. He can assume your point of view, or mine — and maybe some other points of view that scare him. It’s an uncomfortable gift, Jack. Perception’s a tool that’s pointed on both ends.

The binaries of perception/imagination and critic/artist are getting quite a workout at this point, and beginning their inexorable slide towards glorious oversignification. The line is taken from Red Dragon, although it’s part of Bloom and Crawford’s conversation there. Moving it to Hannibal changes its valences, although it’s still basically a “the abyss gazes also” reworking. Coming from Hannibal, however, renders the nature of the abyss entirely explicit. What Hannibal, for his part, fails to realize is that consumption is also pointed on both ends.

HANNIBAL: I’m very careful about what I put into my body. Which means I end up preparing most meals myself. A little protein scramble to start the day. Some eggs, some sausage.

WILL GRAHAM: It’s delicious. Thank you.

It’s conveyed entirely through Mads Mikkelsen’s acting, but Hannibal is clearly tricking Will into eating the leftovers of Cassie Boyle’s lung. This is remarkable both for Hannibal’s ability to make a lung sausage that can pretend to be normal breakfast sausage and because it marks the point where Hannibal begins his colonization of Will’s psyche; it’s no coincidence that this is the scene where he confidently declares that Will will eventually find him interesting. The theme of Hannibal making people unknowingly eat his victims, and of this being a form of power for Hannibal, will recur throughout the series.

Note, however, that Will’s understanding as a form of imagination constructed within, as Hannibal puts it, “the bone arena of your skull” is just as much a form of consumption as Hannibal’s lung sausage. Like Hannibal, Will makes those he defeats into a part of himself. They become captured by his imagination, imprisoned in one of the forts he builds in his mind just as much as they are in the Baltimore State Hospital for the Criminally Insane.

WILL GRAHAM: I don’t think the Shrike killed that girl in the field.

HANNIBAL: The devil is in the details. What didn’t your copycat do to the girl in the field? What gave it away?

WILL GRAHAM: Everything. It’s like he had to show me a negative so I could see the positive. That crime scene was practically gift-wrapped.

The fact that Hobbs’s murders can be turned inside out such that the tableau of Cassie Boyle’s body evokes Hannibal’s contempt and not Hobbs’s love gives an unsettling degree of validation to Hobbs’s love in the first place. The show is largely willing to own up to this – future episodes will operate under the assumption that he did, at least, genuinely love Abigail. There is a certain agnosticism on whether this love particularly matters – Hobbs is consistently treated as a somewhat crude monster. If anything, his capacity for love makes him pathetic in a way that Will and Hannibal are not. Nevertheless, the idea that killing and eating eight people can be an expression of love is something the series goes out of its way to take seriously.

The “negative image” is understood primarily on the level of Will’s imaginative design. Although Lecter departs from Hobbs’s methodology in only taking the lungs to eat, the picture he paints, to use Will’s phrase, is studiously similar to Hobbs, in a manner that is at least a partial departure for Hannibal, whose tableaus are usually tailored to the victim. Where it takes on an inverse relationship with Hobbs is on the imaginative level. It is also, however, true on a literal and pragmatic level: instead of the absence of body there’s a presence. (Note that Elise Nichols is similarly a negative image, and is the springboard for Will’s other major imaginative leap.)

HANNIBAL: You don’t know me and I suspect we’ll never meet. This is a courtesy call. Listen very carefully. Are you listening?

Hannibal’s decision to tip off Hobbs is presented as a sort of motiveless mischief, and it’s certainly the case that Hannibal often acts out of little more than his own sense of amusement. Certainly he never espouses on his motivations. His primary goal seems to be to put Will in a situation where he takes a life, and he succeeds at this. (Note the precision with which his prediction that they’ll never meet comes true, with Hannibal striding into the kitchen right as Hobbs dies.) But there is also a sense of domination over Hobbs. Hannibal never gets to eat him, and so this fleeting contact through which his fate is sealed will have to do, Hobbs remaining merely an ingredient in Hannibal’s preparation of Will as opposed to someone Hannibal will get the pleasure of consuming.

Sex in the Time of Empire Myriad Universes: Terok Nor