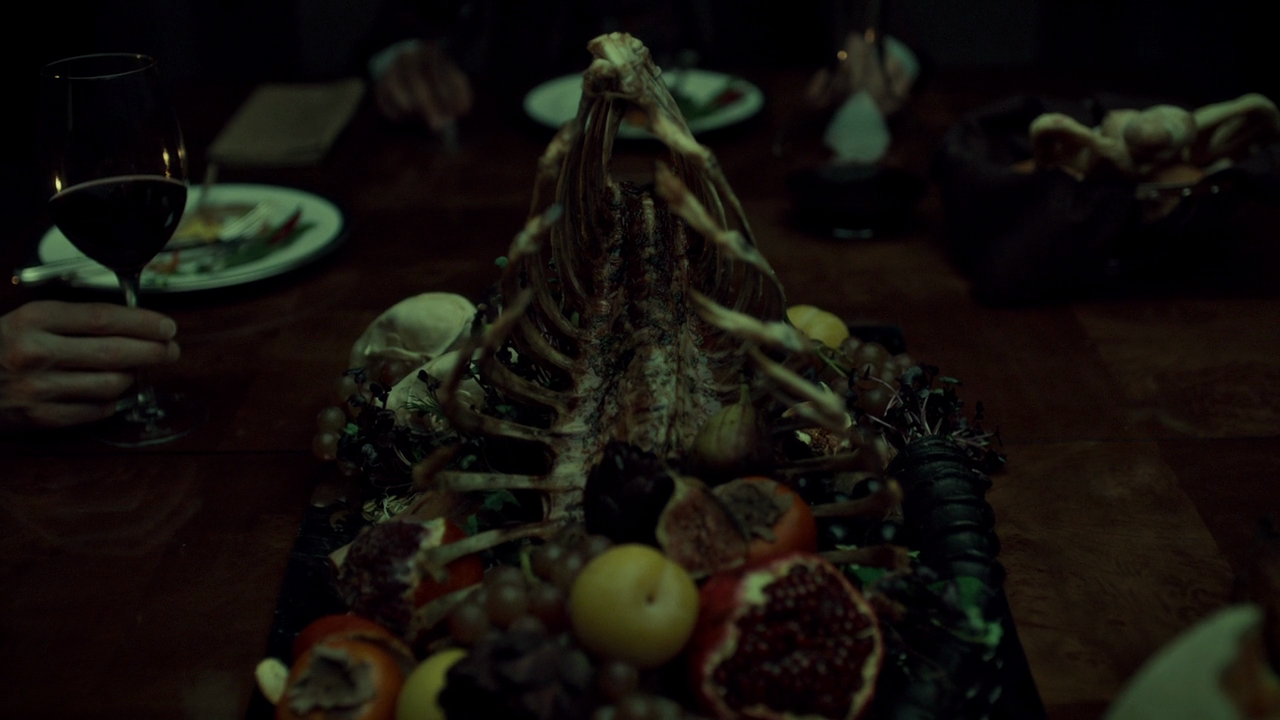 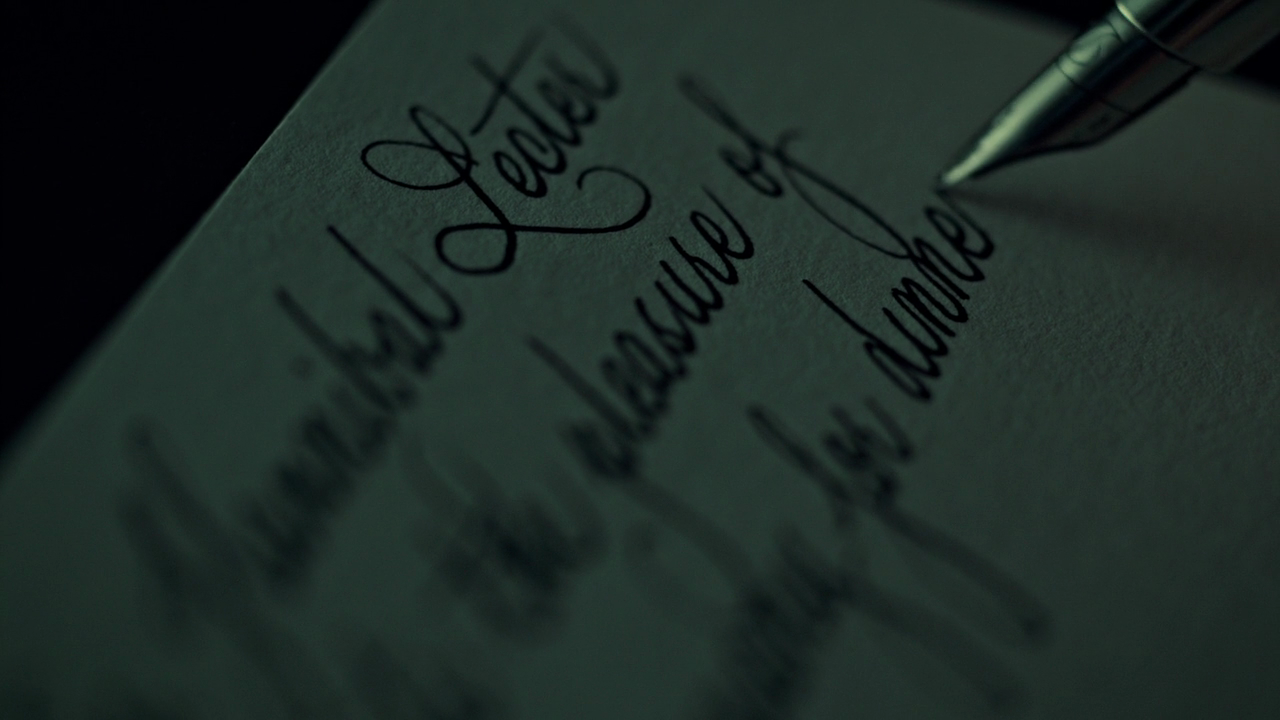 The shooting script called for a flash forward of Will screaming in pain from the end. Instead the episode begins with a moment of quiet ritual, with Hannibal writing out, in exquisite calligraphy, an invitation to Jack, setting their eventual confrontation as a piece of theater – a staged event the shape of which is defined by formal considerations of etiquette. 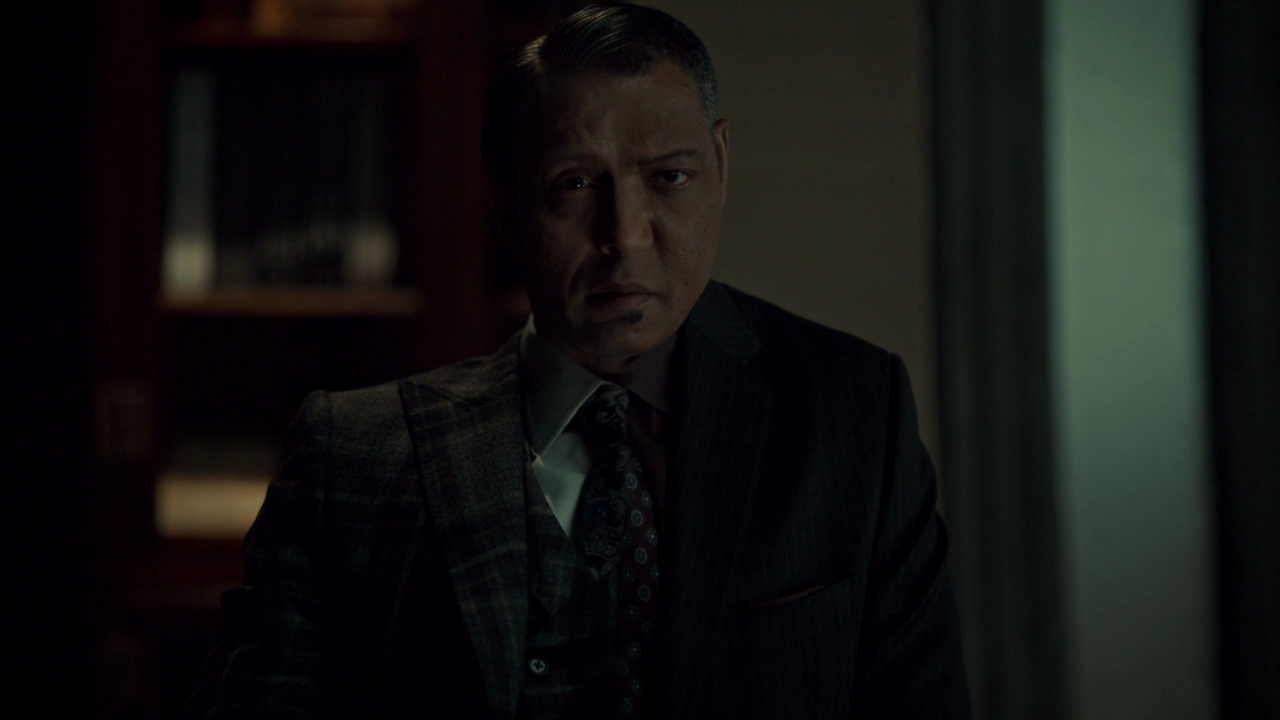 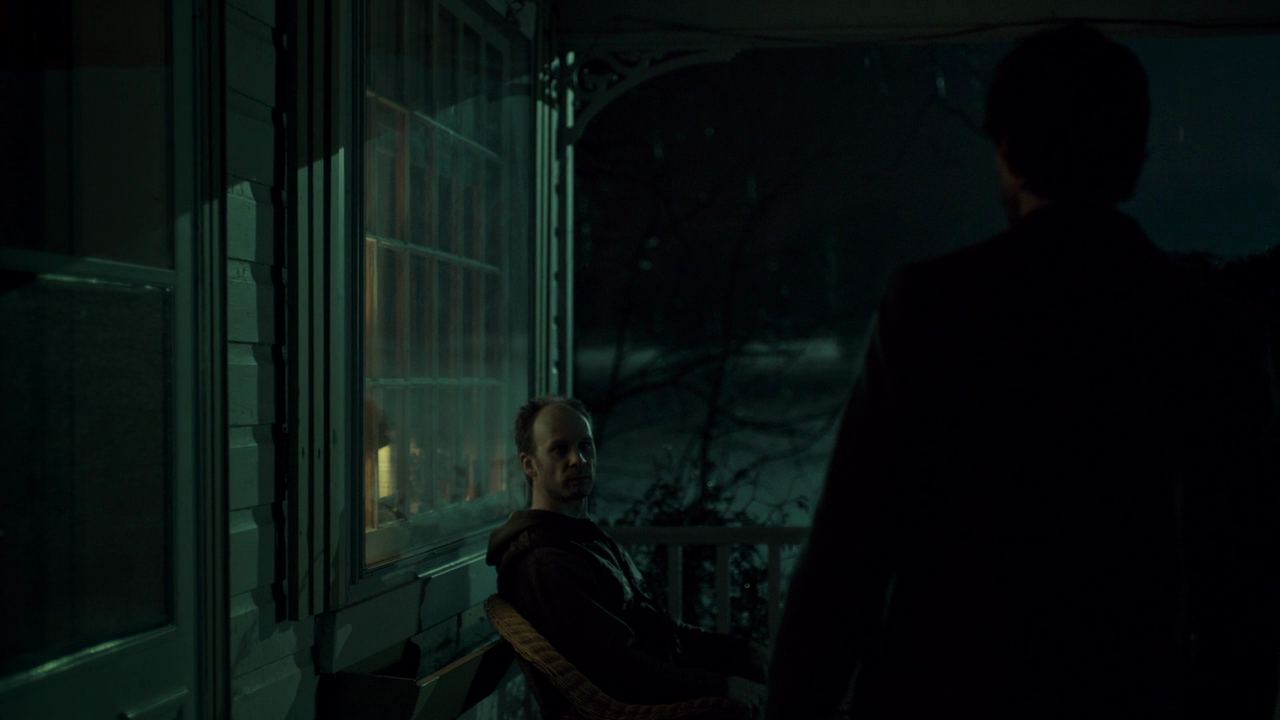 The otherwise unmotivated reappearance of Garret Jacob Hobbs – who seems at this point slightly dated in the face of Will’s newer murderous temptations and inclinations – is mostly here to set up the unexpected return of Abigail later in the episode. 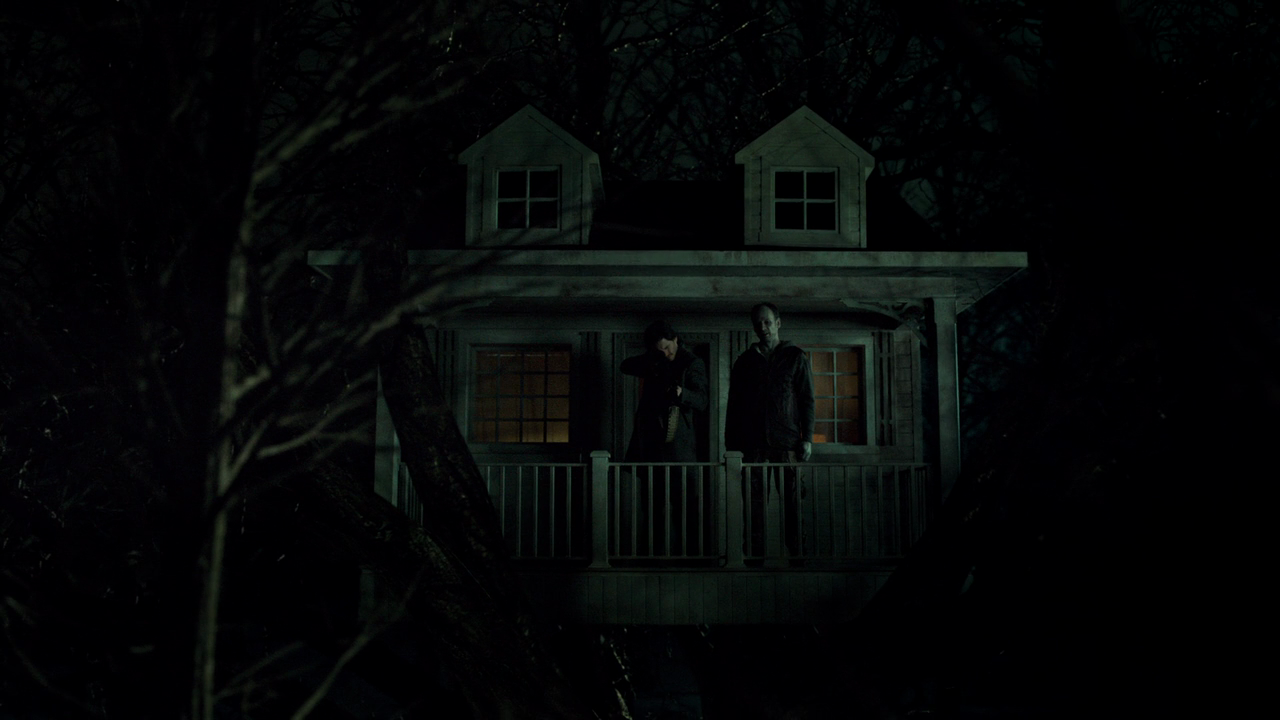 For all that Hobbs is fairly unmotivated foreshadowing that doesn’t work on its own merits, however, it is the excuse for the episode’s best hallucinatory image, and indeed one of the series’ best, as Will’s house is projected into a thicket of branches that implicitly suggest antlers as well. It’s massively oversignified, except that every interpretation works and speaks cogently to Will’s position and state of mind. 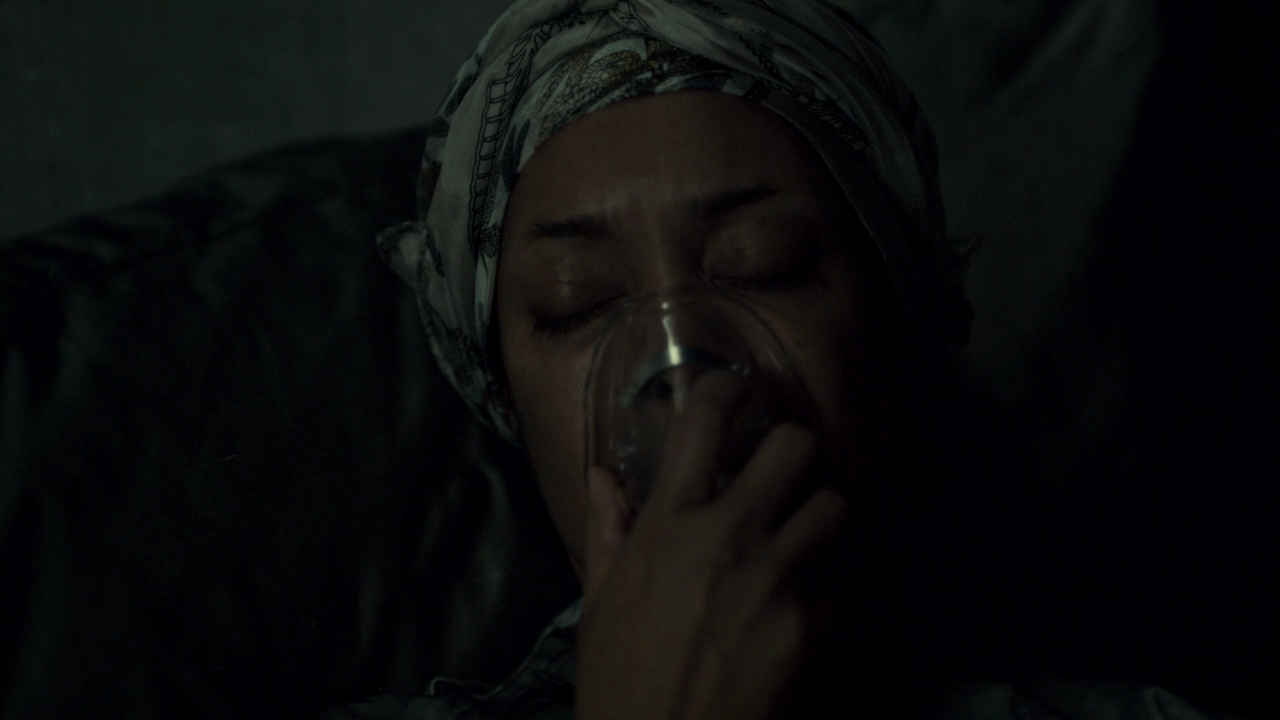 Bella’s return and evident deterioration is an unexpected gut punch. Like Bedelia’s return in “Tome-Wan,” its effectiveness springs from a combination of inevitability and a lack of immediate setup. Of course Bella is doing this poorly – we just hadn’t had cause to think about it by dint of not seeing her since “Takiawase.” But her inclusion is a smart and compelling choice – a way of forcing the audience to remember that Jack and Hannibal’s friendship is actually substantive. Bella’s lines about forgiveness not being a verb but rather an event that happens to you are particularly phenomenal, as is her aggrieved “you moved my punctuation mark.” 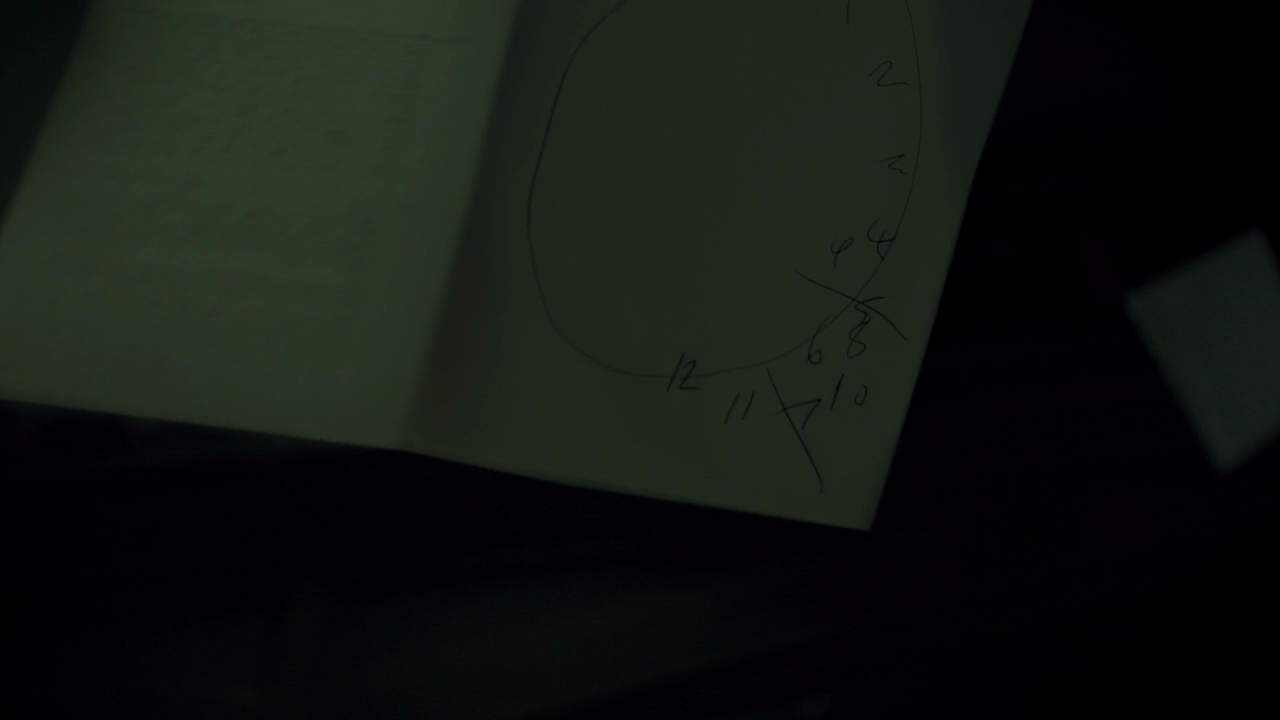 Hannibal’s demolition of his life – done, with characteristic irony, out of compassion for the patients who would be exposed to invasive scrutiny in the ensuing scrutiny – is an effective way of flagging the degree to which everything is about to burn down and the stable foundation of the show as “Will and Hannibal solve crimes with the FBI” is about to collapse in favor of something stranger and weirder. 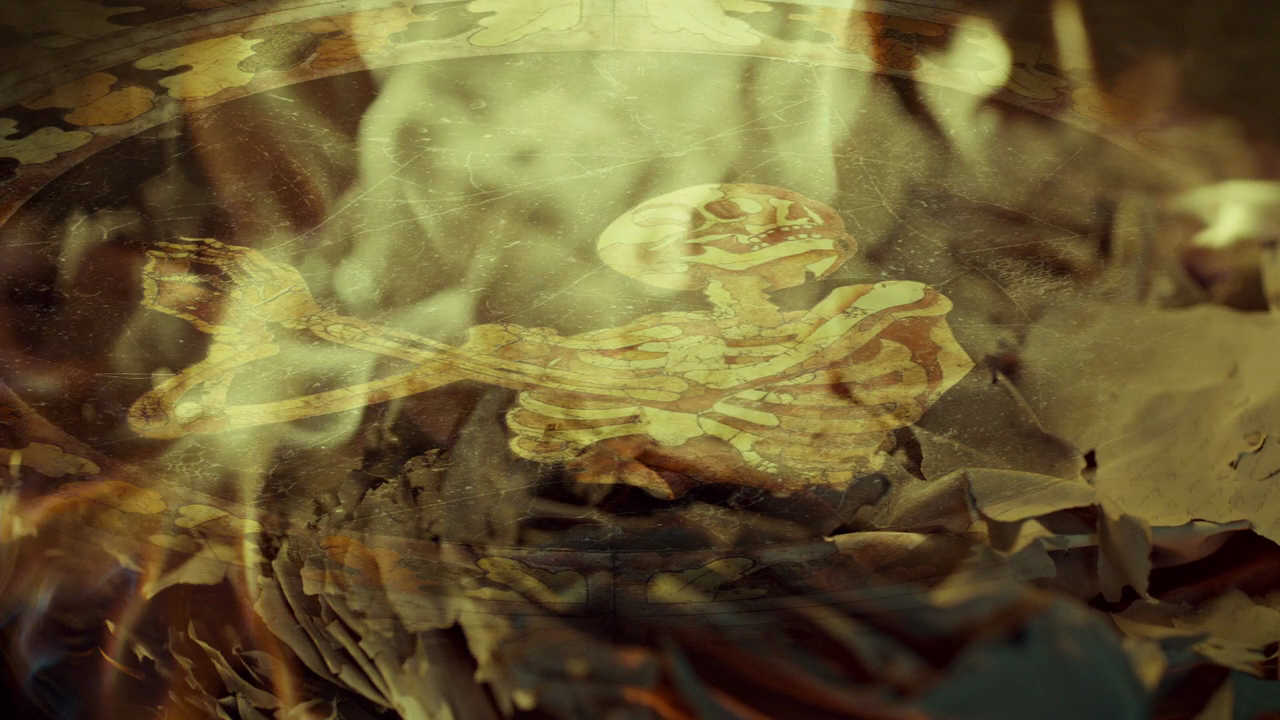 As may be clear by this point, I am not entirely enthralled by “Mizumono,” which I view as a contrived conclusion to a deeply underwhelming run of episodes that leads into an effective season cliffhanger. Here, however, it is haunted by its one good aspect, the genuinely sublime season (represented here by the skull on the floor of the Norman chapel in Palermo, which he mentions as the foyer of his memory palace, which would be an instance of Hannibal raiding Moffat were the detail not taken from Thomas Harris) that is built atop the smoldering wreckage it leaves. 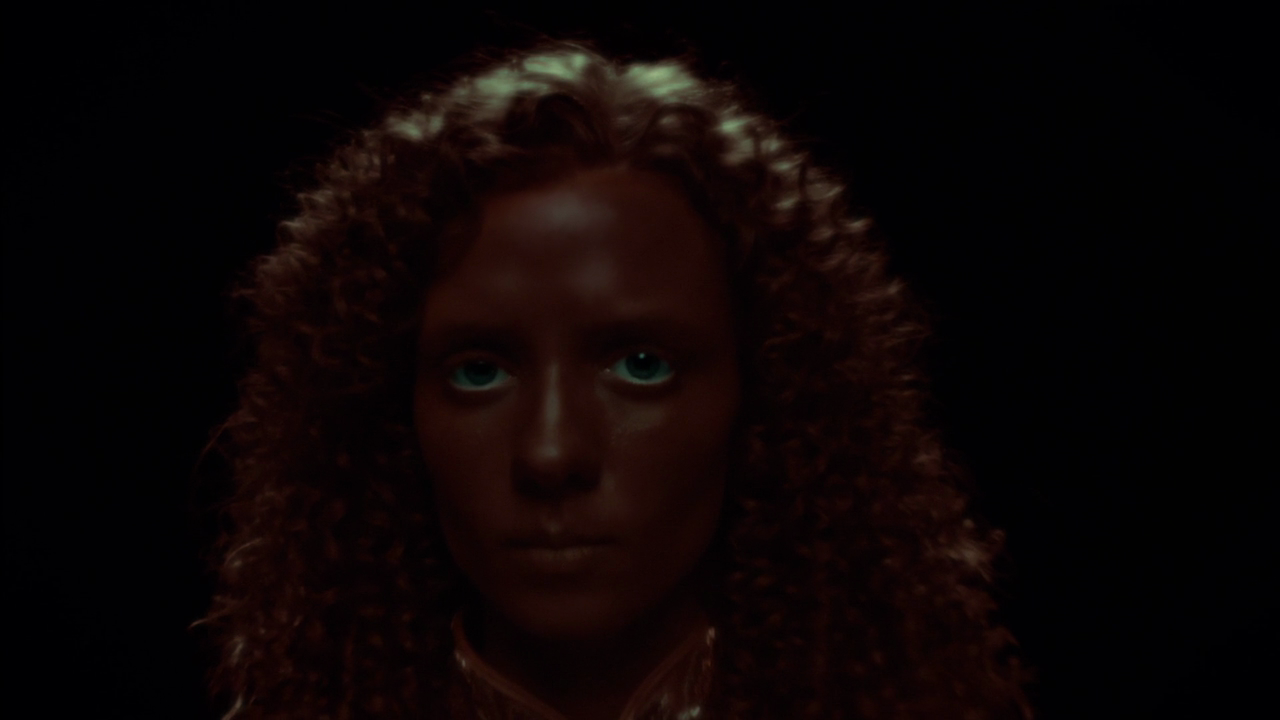 An odd image. Its narrative purpose is to signify what Hannibal has just learned by smelling Will, namely that Will has been playing him. (Again, how on earth did he get fooled about Freddie’s meat?) But why is she blood red? The script calls for her to be “a vermillion version of, the tarry Alana” from “Kaiseki,” which is thoroughly unclarifying given that Alanna was in Will’s dreamscape. (Indeed, this is a rare peek into Hannibal’s.) Meanwhile, the overall visual emphasis on the color red and the pan out from a close-up of Freddie’s hair suggests that Hannibal smells her red hair. Google suggests that the claim redheads have a distinct smell is not uncommon, but this is on the whole still baffling. 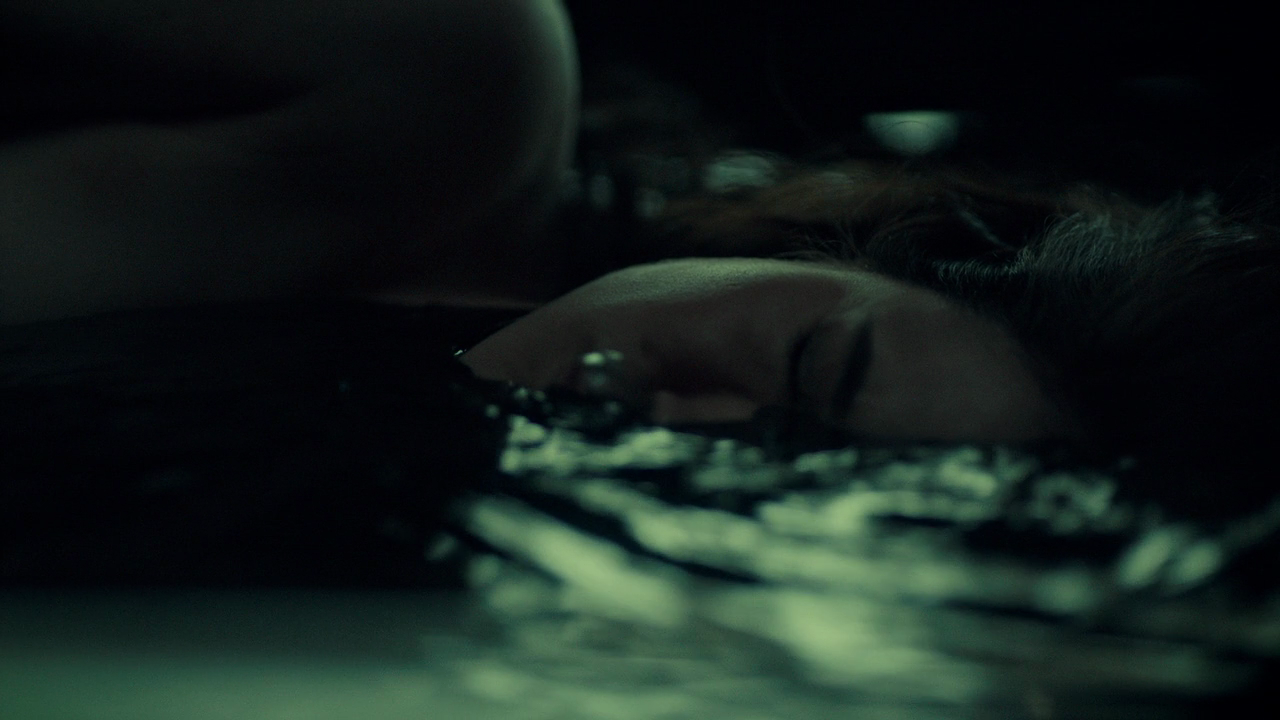 Alana’s narration for this scene is depressingly literal – about a watery darkness forcing its way into her and poisoning her. For all that this is both tedious and cliched, however, it’s arguably the first time Alana has been given a decisive move in an interesting direction. Being Alana, this will be a mixed bag in almost every sense, with the very significant exception being her wardrobe. But we’ll get to that all next season. 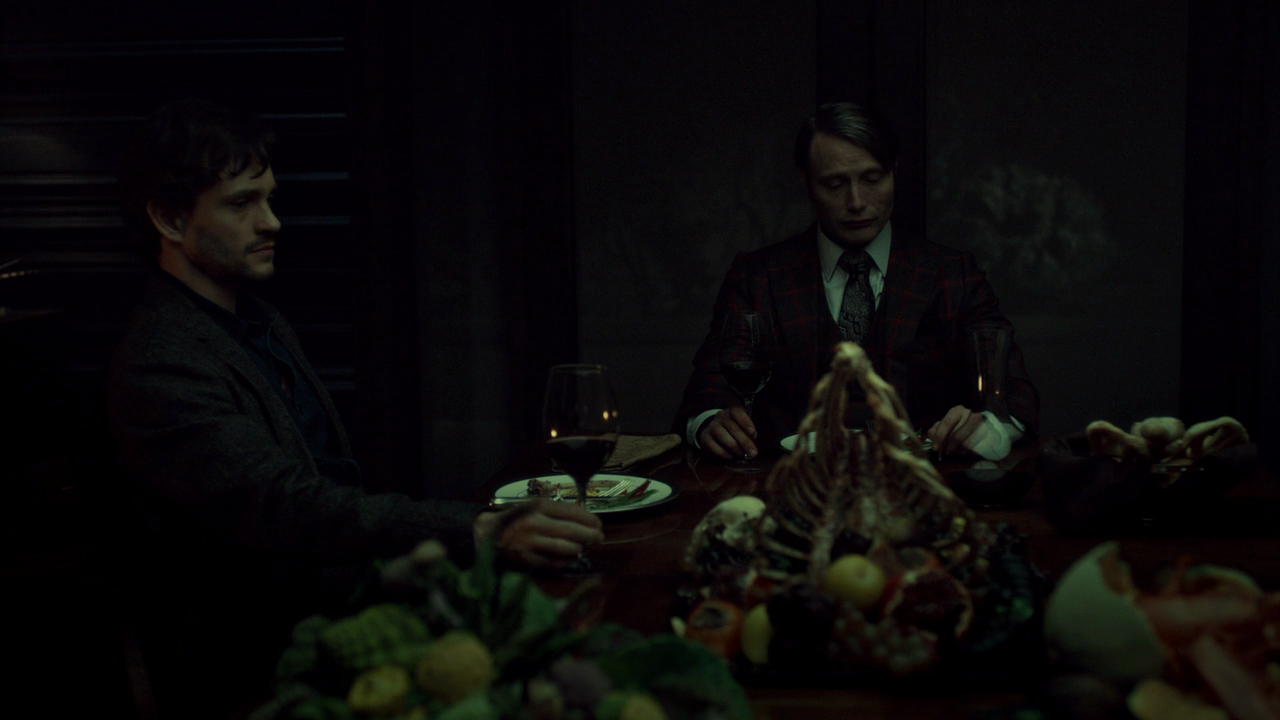 The script calls for Mikkelsen to play Hannibal’s sense of betrayal much more emotionally, with this scene suggesting he should be on the brink of tears as he toasts to “truth and all its consequences.” The more restrained version is less slashy, but probably a better way to handle Hannibal’s interiority, leaving it as something we know is there and can ascertain, but that we do not have access to per se.

Janice Poon’s lush lamb roast, made to look “like the steeple of a church or the fingers of praying hands,” is among her finest creations. 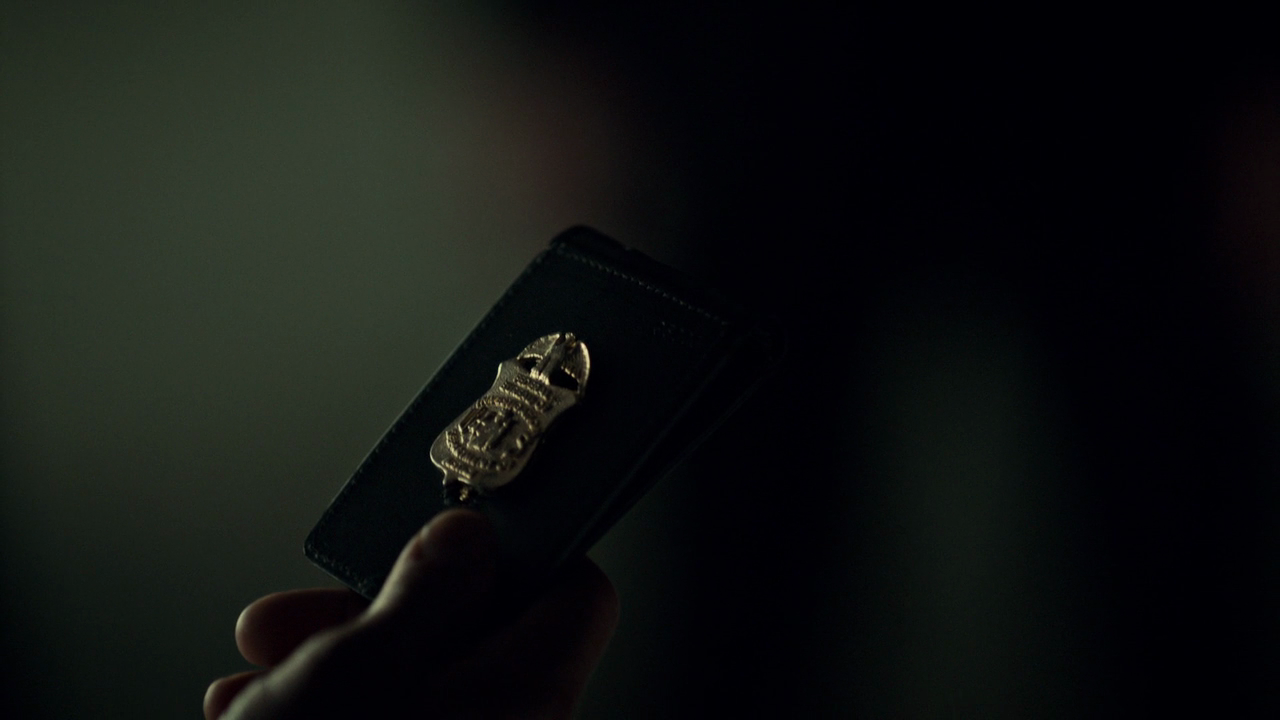 This scene marks a strange intrusion of, if not realism, at least a measure of aggressive mundaneness. Jack is ultimately foiled in his plan to use the full resources of the FBI to catch Hannibal when it’s pointed out to him that the plan he and Will have concocted is, in fact, entrapment. Jack’s incredulity at the idea that you can entrap someone into cannibalistic murder is one of the episode’s more entertaining beats. 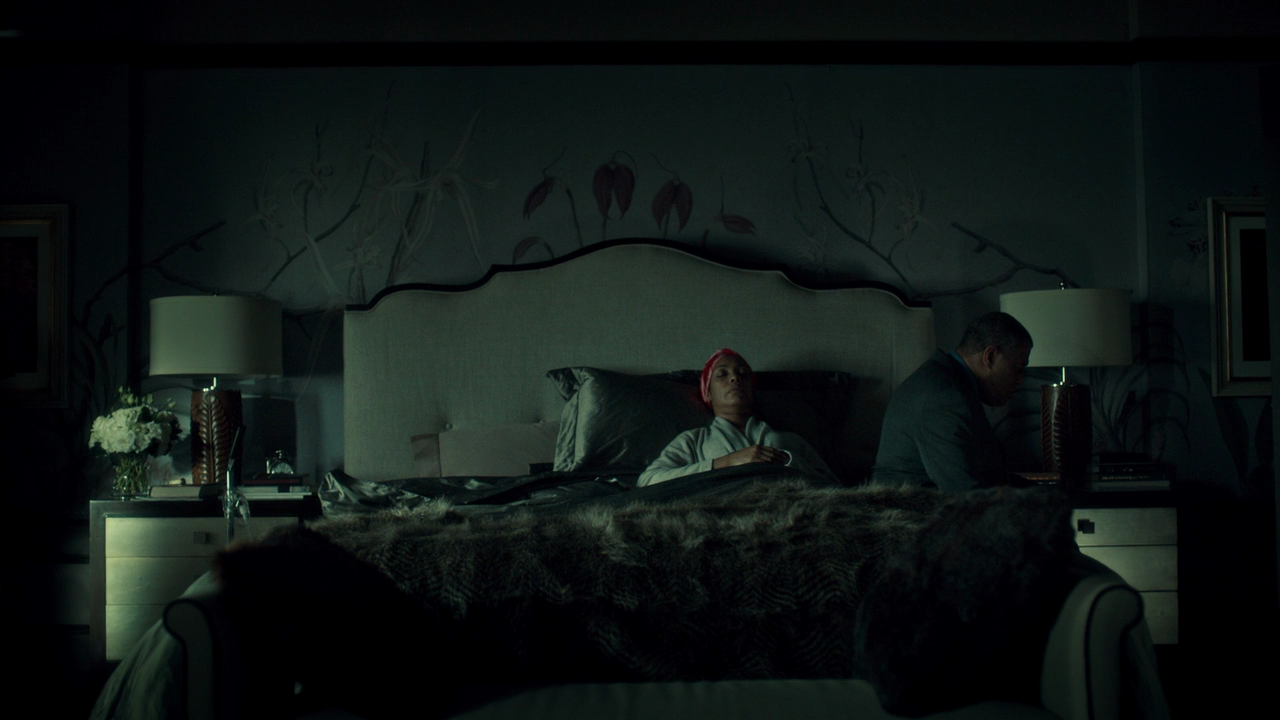 The design of Bella’s sickroom is, obviously, an extension of her internal condition. But it’s notable just how much the room specifically invokes Hannibal’s aesthetic, suggesting that her cancer is in one sense a symbolic representation of Hannibal’s presence in Jack’s and her life. Certainly the timeline fits this interpretation. 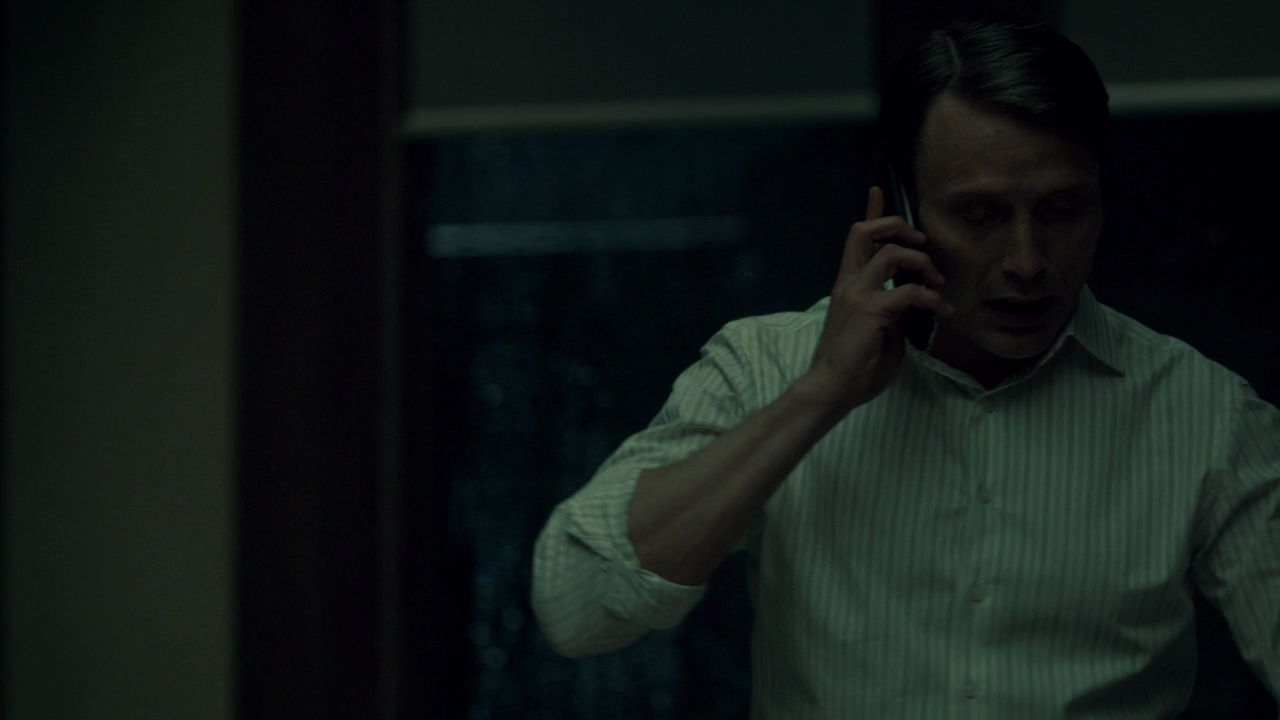 A callback to “Apéritif” as Will delivers, verbatim, Hannibal’s line to Garret Jacob Hobbs, albeit without the build-up of “you don’t know me and I suspect we’ll never meet.” This marks the closest thing the episode offers to an actual resolution of its initial “where do Will’s loyalties lie” question. As an answer, it’s insubstantial – the thing Will is warning Hannibal about is the FBI coming for him and Jack – not for Hannibal. Where Hannibal’s warning to Hobbs provoked a rampage that killed Hobbs’s wife and nearly killed Abigail, there are no discernible effects of Will’s warning – it tells him nothing he didn’t already know, and provokes no response. 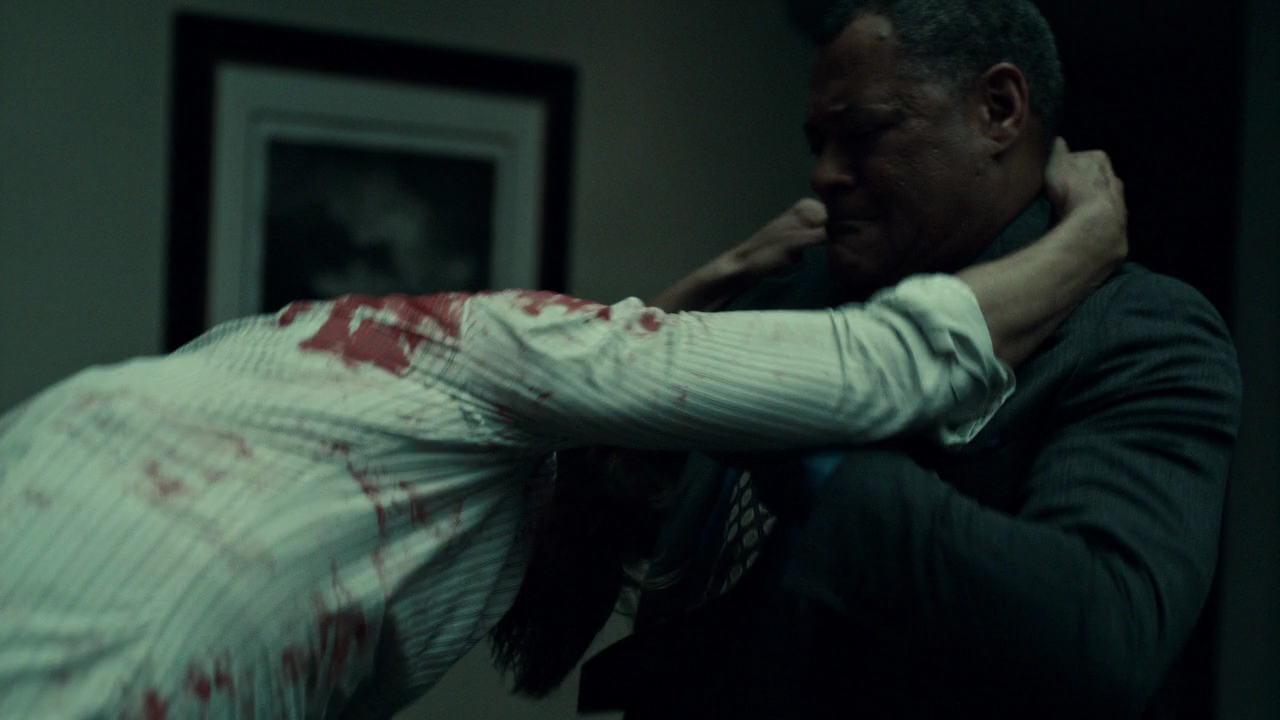 I probably should have saved “once again, we return” for this. Ah well. Anyway, at long last we return to where we started the season, namely with Jack and Hannibal going at it. It’s interesting just how much this event hasn’t hung over the season. I suggested in “Kaiseki” that it’s easy to forget it, or at least to have it stop being on the forefront of your mind, but it’s really not until the end of “Tome-Wan” that the Jack/Hannibal confrontation becomes a destination that’s visible for reasons other than the flash forward. 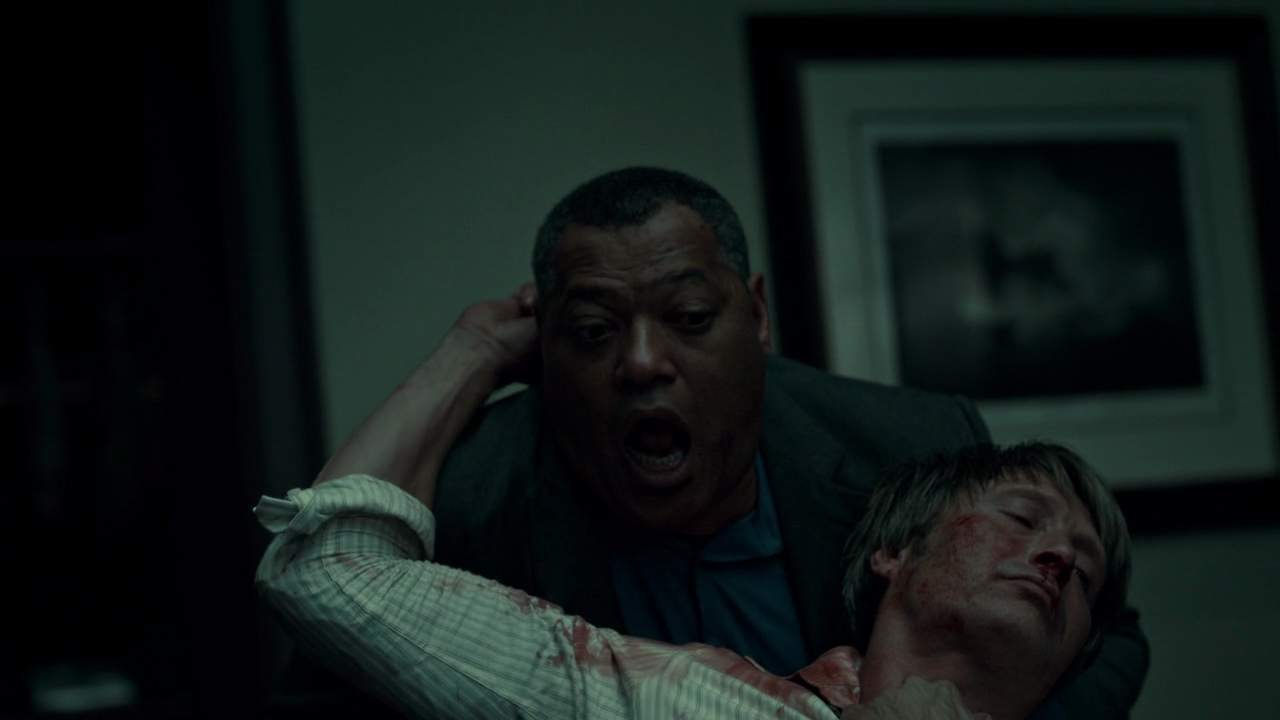 Given that Jack’s fate – bleeding out in the pantry – is part of the flashforward, it’s inevitable that he has to go down first, as a transition to the portion of the season that is not pre-ordained, and when “anything can happen,” by which I mean a carefully prescribed pool of things that wouldn’t normally happen but can in certain circumstances.

Spoilers: Jack lives, of course, because he’s too central to Red Dragon and Silence of the Lambs to be written out like this. 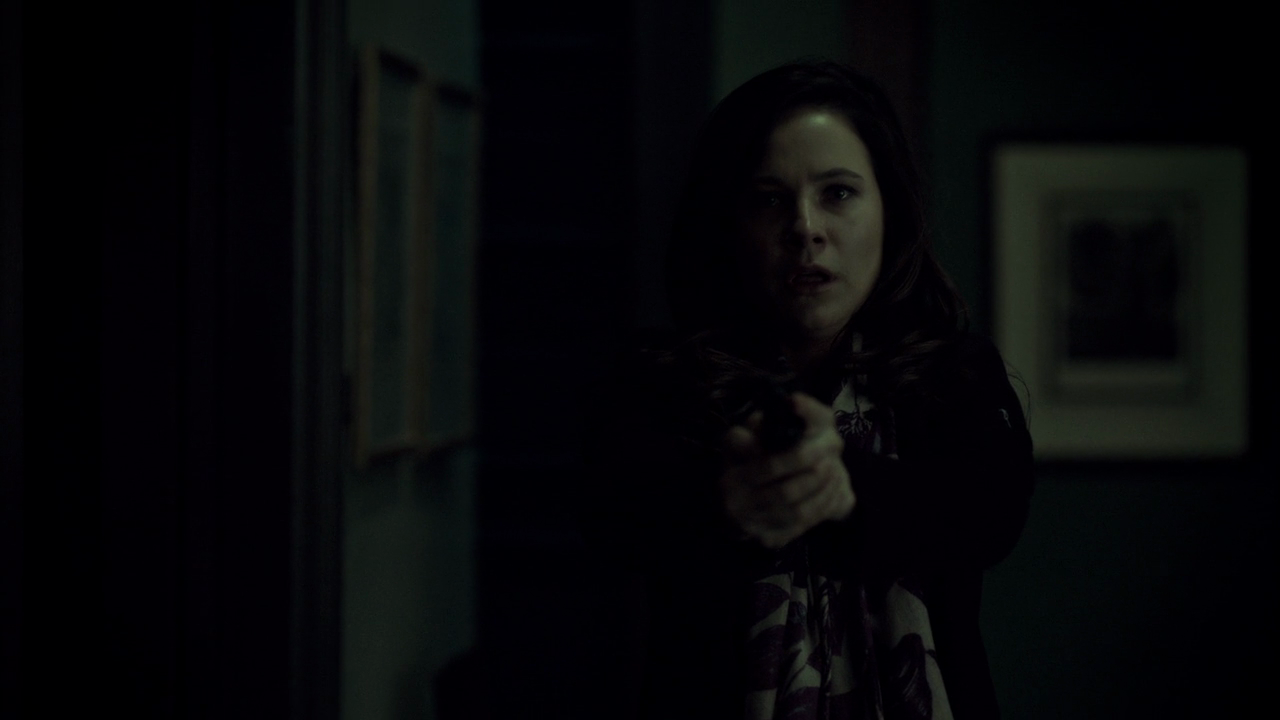 And so we move on to the Alana confrontation. In many regards, and atypically for the show, this is the most interesting of the cliffhanger maimings, in that Alana being here and doing this is itself a major development in her character, and she has the most at stake beyond merely catching Hannibal, which, for all the complexity in their relationship, is ultimately all Will has at stake in this moment. Well. Sort of. 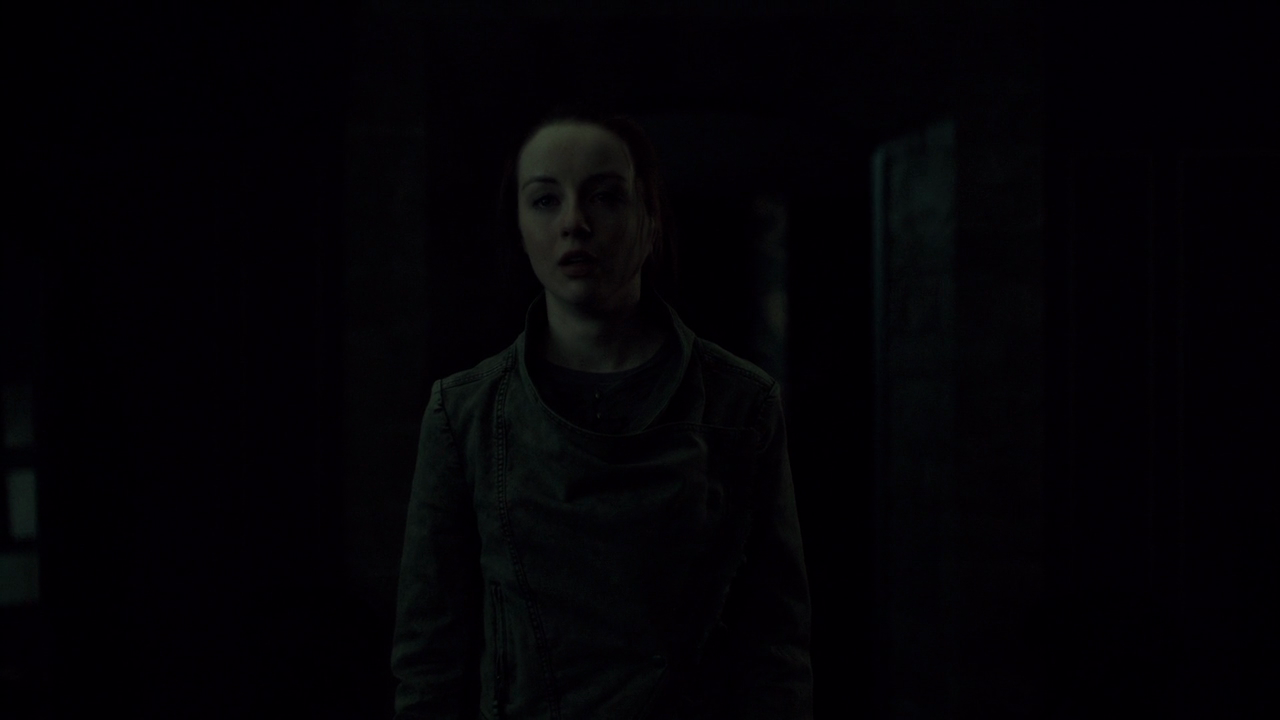 Oh, yeah. Abigail’s not dead. This is a properly brilliant twist, in which, against all odds, it turns out that Hannibal hasn’t killed someone. Man, I really hope they do something with it. 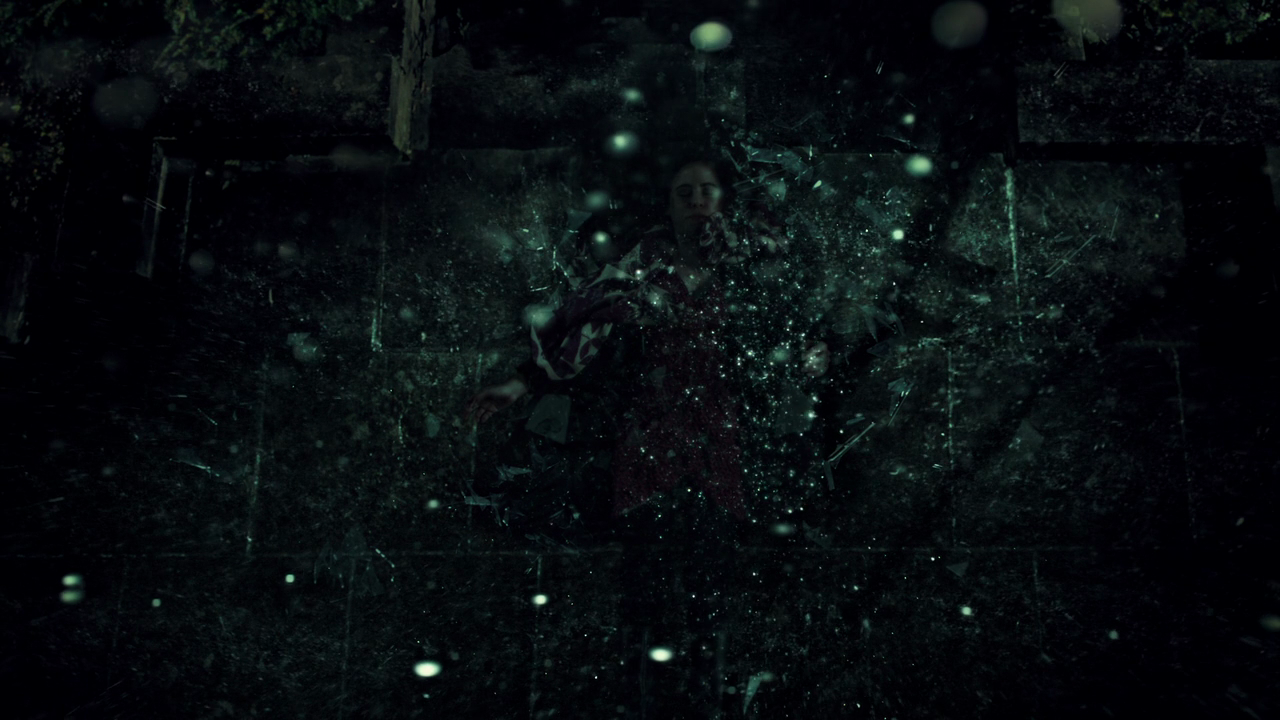 In addition to getting the most interesting confrontation with Hannibal, Alana gets the most interesting maiming, defenestrated by Abigail Hobbs. We’ll go ahead and not pay too much attention to the degree to which this act of violence is aestheticized compared to the ones against Will and Jack. I mean, why upset things when we’re on a rare bit of praising Alana scenes.

Spoilers: Alana’s not dead either. Which is nice, actually, as they could have killed her. 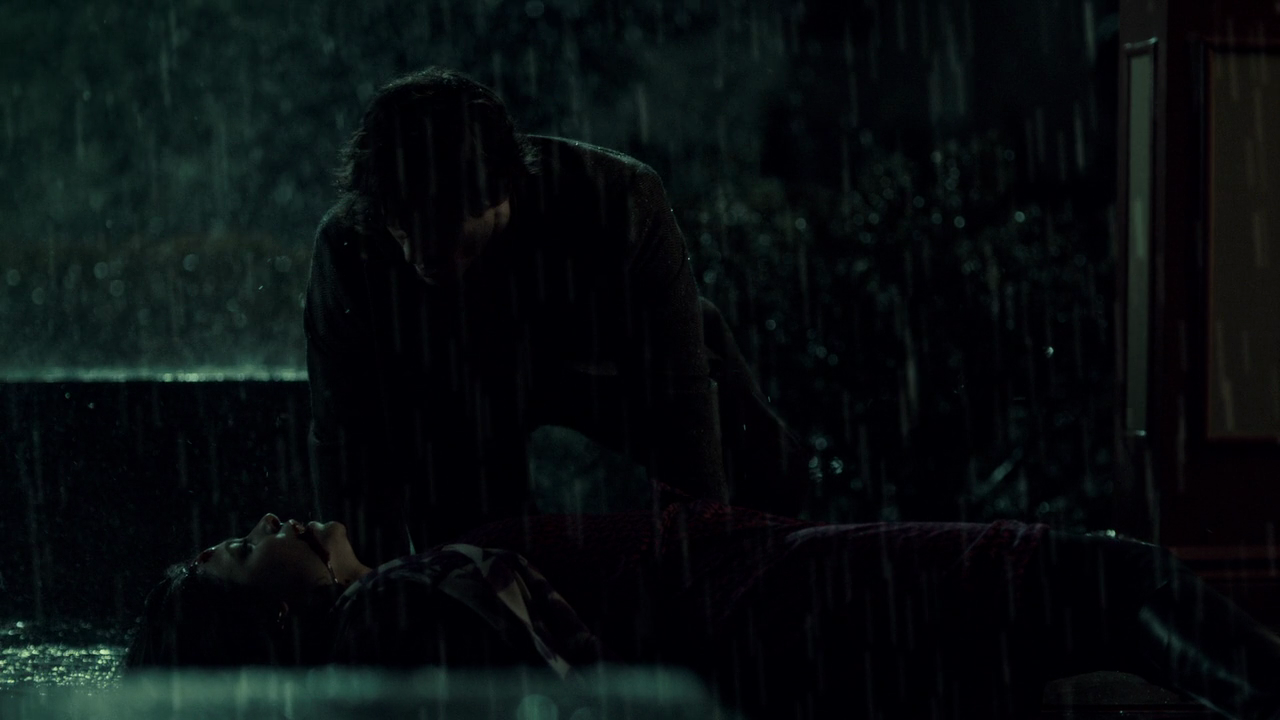 Alana manages to get out the information that Jack’s inside. This is, to say the least, a puzzling choice of facts to prioritize. 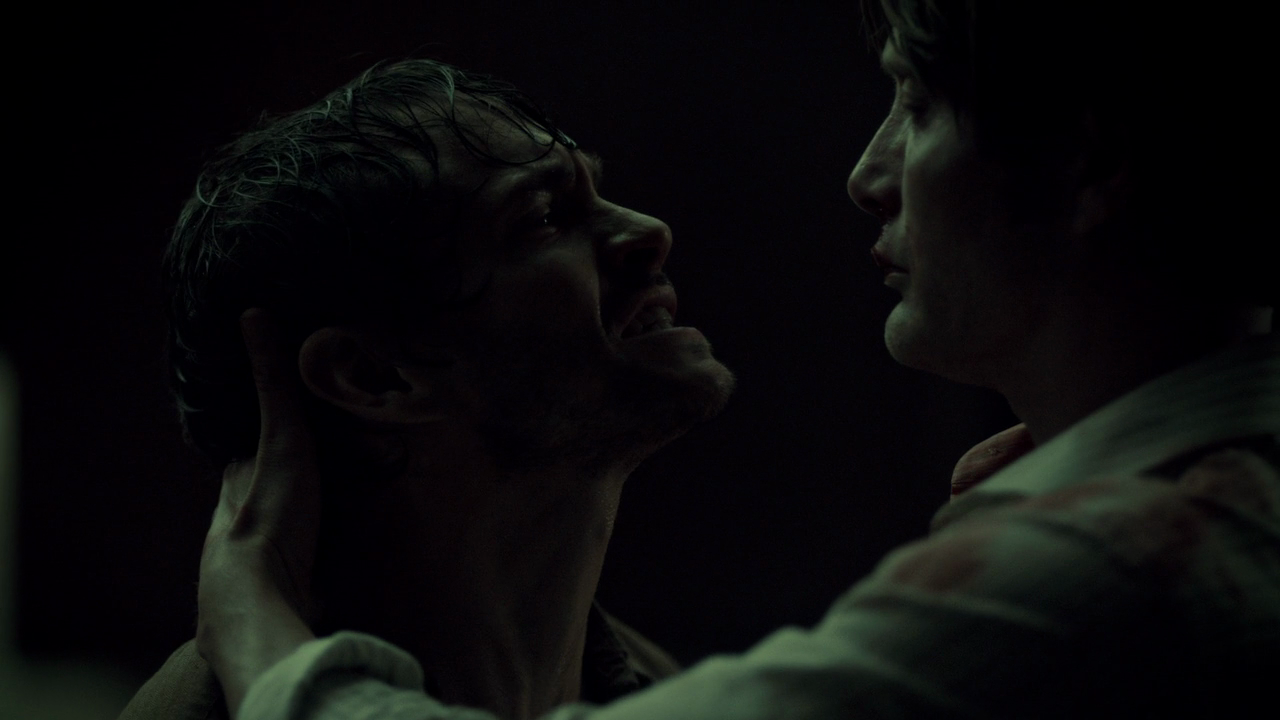 And the third one goes down.

Spoilers: Of course Will lives. Come on. 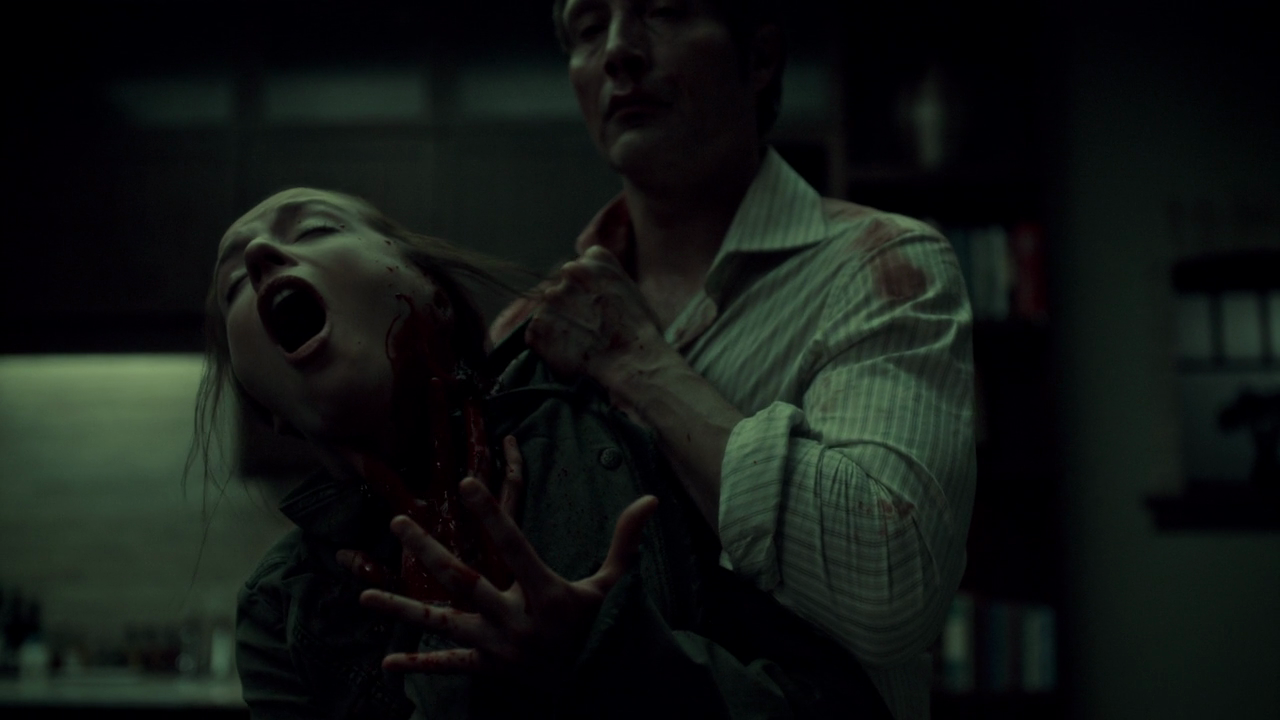 Spoilers: Abigail does not live, a fact that makes her shock return in some key regards underwhelming, resonating only as shock before the status quo is harshly returned seven minutes later. Even as the act of counter-betrayal it’s presented as, it’s fundamentally limited, consisting of an act Will has already forgiven Hannibal for. 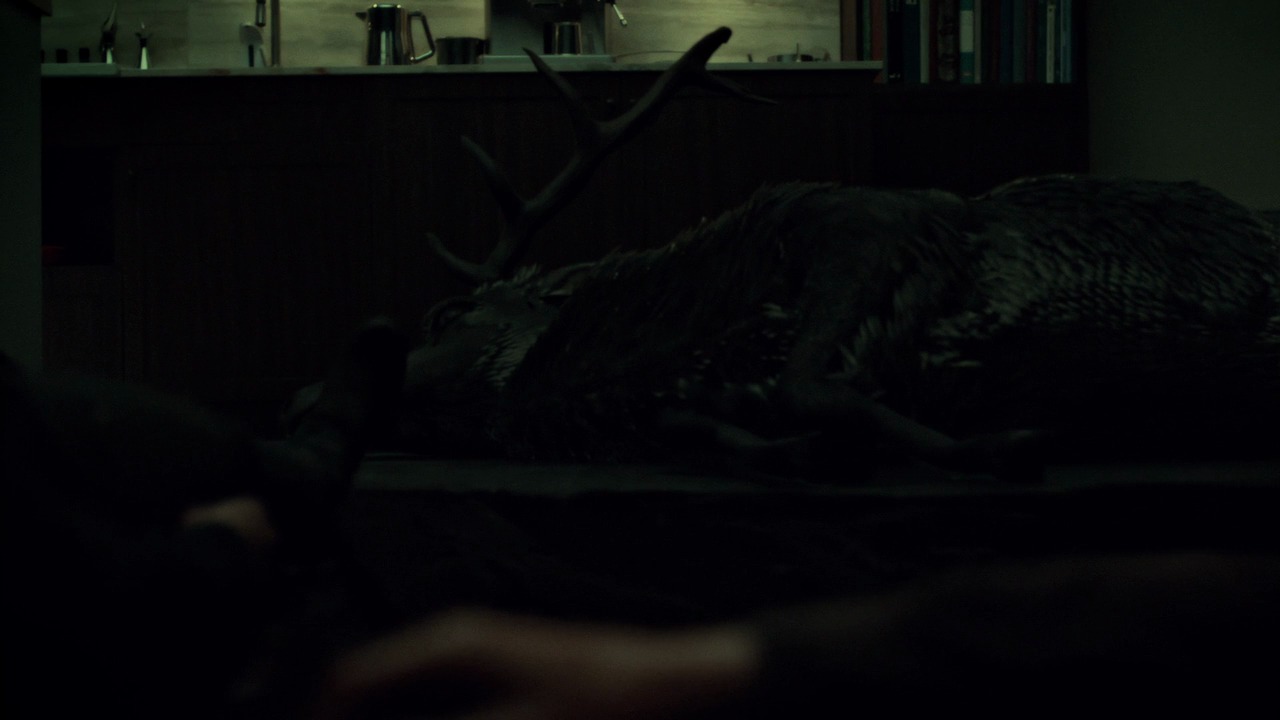 Will’s vision of the stag dying beside him is curious, in that it has historically represented Hannibal, who’s fine here. This is consistent with Season Two’s general metamorphosis of that imagery. Fuller had originally described the stag as Will’s connection with Hannibal, and here it is clearly serving purely in that role, with its proto-Wendigo functions no longer required of it. 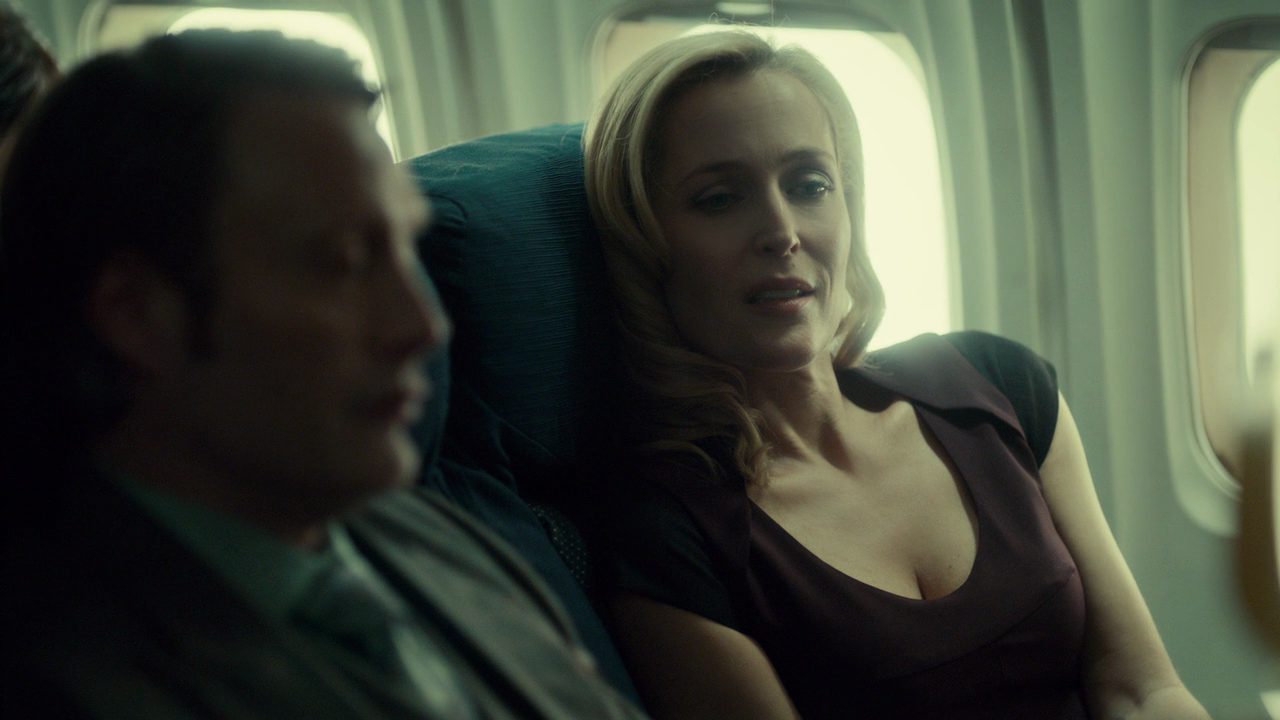 An homage to the final scene of Ridley Scott’s film adaptation of Hannibal, this time setting up the commencement of that adaptation instead of its conclusion. The scene being pastiched has Hannibal feeding brains to a young child. Instead of that relatively cute joke we get the admittedly intriguing question of what Bedelia’s doing there. Answers in five weeks as we take a break for an exciting review and “An Accurately Named Trilogy.”

How To Get Ahead in Colonialism Hyrule Haeresis 8

Leave a Reply to PrzemekCancel reply